2Department of Studies in Chemistry, Manasagangothri, University of Mysore, India

Copyright: © 2015 Rohit T, et al. This is an open-access article distributed under the terms of the Creative Commons Attribution License, which permits unrestricted use, distribution, and reproduction in any medium, provided the original author and source are credited.

A suitable, rapid, sensitive and accurate ultra-performance liquid chromatography (UPLC) method was developed for the quantitative determination of Duloxetine hydrochloride and its impurities in active pharmaceutical ingredient. Chromatographic separation was achieved on shim-pack XR-ODS II (3.0 × 100 mm, 2.2 μm), and the gradient eluted within a period of time, that is, 15 minutes. The eluted compounds were monitored at 230 nm. The flow rate was 0.9 ml/min and the column oven temperature was maintained at 40ºC. The resolution of Duloxetine hydrochloride and 12 impurities (potential impurity, process related impurity and degradation products) were greater than 1.3. The correlation coefficient (r2>0.99) values indicated clear correlations between the investigated compound concentrations and their peak areas within the quantitation limit to 200% level. The performance of the method was validated according to the present ICH guidelines for specificity, quantitation limit, detection limit, linearity, accuracy, precision, ruggedness and robustness. The recoveries obtained (93.28-102.41%) ensured the accuracy of the developed methods. 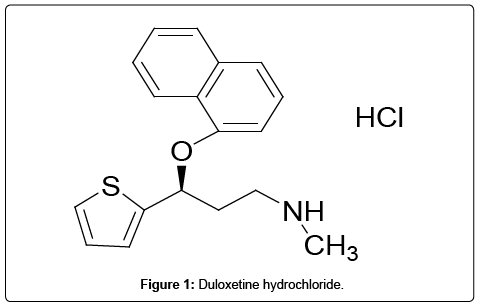 A Shimadzu prominence UFLC-XR system equipped with inbuilt auto injector, and photo diode array detector was utilized for method development and validation, Water´s Empower2 was used for data acquisition and system suitability calculations. The chromatographic conditions were optimized using a shim-pack XR-ODS II (3.0 × 100 mm, 2.2 μm). The Column was maintained at 40ºC ± 2ºC. The buffer preparation was by dissolving 5.5 mL of orthophosphoric acid in 950 mL water, pH adjusted to 3.2 by using triethyl amine. Mobile phase pump-A was a mixture of buffer and acetonitrile in the ratio (78:22 v/v) and mobile phase pump-B was acetonitrile. The flow rate was set at 0.9 mL/min. The detection was carried out at a wavelength of 230 nm. The injection volume was 2 μl. The run time was 15 min. The gradient elution was (T min % B) T0:0, T5:0, T10:27, T11:85, T13:85, T13.70:0 and T15:0 The diluent used mobile phase-A and acetonitrile in the ratio (9:1) throughout the analysis.

The described method has been validated for the related substances by UPLC determination.

The detector response of linearity for all impurities were assessed by injecting impurities separately prepared solutions in the range of QL to 200% (QL, 0.075, 0.1125, 0.15, 0.1875, 0.225, 0.30%) with respect to sample concentration which is 1.0 mg/mL. The correlation coefficient slope and y-intercepts of the calibration curve were determined.

The Quantitation limit (QL) and Detection limit (DL) for Duloxetine hydrochloride impurities were determined by signal to noise ratio method.

The robustness of an analytical procedure is a measure of its capacity to remain unaffected by small, but deliberate variations in method parameters and provides an indication of its reliability during normal usage. To determine the robustness of the method, the experimental conditions were deliberately changed. The solution of duloxetine hydrochloride and its impurities was evaluated. The mobile phase flow rate was set at 0.9 mL/min; to study the effect of the flow rate on resolution, it was changed to 0.8 mL/min and 1.0 mL/min. The effect of column temperature was studied at 45ºC and 35ºC (instead of 40ºC).

Trial 01: Initially, Sodium di hydrogen orthophosphate buffer (0.01M) and 0.1% triethyl amine with pH 7.0 as mobile phase-A and acetonitrile and water in the ratio (90:10) as mobile phase-B was tried on a C18 stationary phase with a shim-pack XR-ODS II (3.0 × 100 mm, 2.2 μm). Flow rate was kept at 1.0 mL/min. When Duloxetine hydrochloride sample spiked with all impurities was injected, it was observed that impurity-D and Duloxetine hydrochloride was coeluted. Changes were made with respect to gradient composition and mobile phase-B ratio, but there was no separation observed between impurity-E and Duloxetine hydrochloride. In this method, few other impurities were also not eluted (Impurity-D, Impurity-E and Impurity-J). Chromatogram is shown in Figure 2. 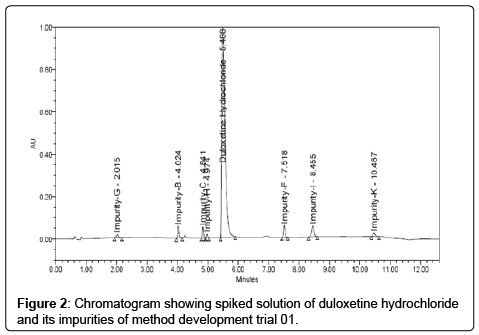 Trial 02: Based on first trial another trial was carried out by using C18 column waters acuity HSS T3 2.1 × 100 mm, 1.8 μm, with the column temperature 40ºC and flow rate at 0.4 mL/min. We switched over to other trial which contained buffer preparation of di-potassium hydrogen orthophosphate (2.8 gram) with pH 8.5. Mobile phase-A contained buffer and acetonitrile in the ratio (80:20) and mobile phase-B contained methanol and acetonitrile in the ratio (85:15). Duloxetine hydrochloride spiked sample solution was injected. With this trial we achieved separation of impurity-E and base line was good, however, it was observed that resolution between impurity-E and Duloxetine hydrochloride was less at about 0.9. In this method 3-Acetyl and 2-Acetyl thiophene was co-eluted, responses of the impurities were less and peaks tailings were also more in impurities as well as in Duloxetine hydrochloride. Likewise, many trials were performed by changing gradient composition, temperature and slight variations in pH, but we observed that there was no improvement in resolution and peak shape. Chromatogram is shown in Figure 3. 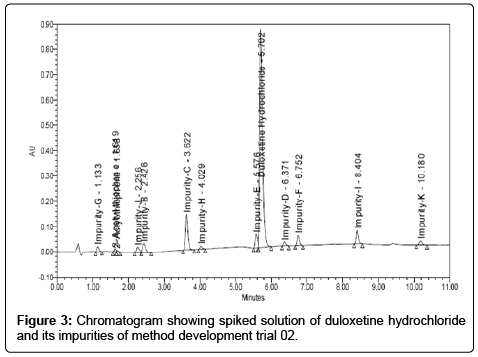 Trial 03: The criticality was observed via the selection of columns and pH of the buffer, and was extensively studied for optimization of the same. A shim-pack XR-ODS II (3.0 × 100 mm, 2.2 μm) column with buffer having pH of 3.2 was found to be satisfactory: at lower pH 3.2 all impurities gets separated with good peak shapes. The method development attempts were made in acidic mobile phase. We changed the composition of mobile phase-A, while keeping the other chromatographic parameters unchanged, which lead to increase in the resolution and sharpness of the peak. As a result, 5.5 mLorthophosphoric acid in 950 mL of water, pH adjusted to 3.2 with triethyl amine, and mixed with acetonitrile in a ratio (67:33 v/v), were used as mobile phase-A. Mobile phase-B contained acetonitrile with a gradient elution (Tmin %B) T0:0, T5:0, T10:27, T11:85, T13:85, T13.70:0 and T15:0 and flow rate set as 0.9 mL/min. All the impurities were separated from each other as well as from duloxetine hydrochloride. In this method resolution between duloxetine hydrochloride, impurity-E and impurity-I were less, hence, the method was not found suitable. The Chromatogram shown in Figure 4. 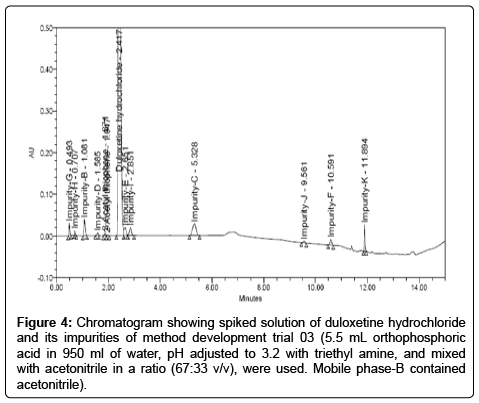 Figure 4: Chromatogram showing spiked solution of duloxetine hydrochloride and its impurities of method development trial 03 (5.5 mL orthophosphoric acid in 950 ml of water, pH adjusted to 3.2 with triethyl amine, and mixed with acetonitrile in a ratio (67:33 v/v), were used. Mobile phase-B contained acetonitrile).

Trial 04: As the means was to increase the resolution, the percentage of acetonitrile in the mobile phase was decreased from the initial ratio. The result of this change showed that the resolution between duloxetine hydrochloride and impurity-E was achieved more about 2.81 but peak tailing was high (Chromatogram shown in Figure 5). Therefore, further method development trials were performed on gradient mode. Finally, satisfactory peak shape and the resolution of closely eluting impurities was achieved on shim-pack XR-ODS II (3.0 × 100 mm, 2.2 μm) column by using mobile phase: the buffer preparation was by dissolving 5.5 mL of orthophosphoric acid in 950 mL water, pH adjusted to 3.2 by using triethyl amine. Mobile phase pump-Awas mixture of buffer and acetonitrile in the ratio (78:22 v/v) and mobile phase pump-B was acetonitrile. The gradient program also played a vital role in the separation of all the peaks (impurity-J, impurity-B, impurity-C, impurity-D, impurity-E, impurity-F, impurity-G, impurity-H, impurity-I, impurity-K, 3-acetyl thiophene and 2-acetyl thiophene) with in short time. Thegradient elution was (Tmin %B) T0:0, T5:0, T10:27, T11:85, T13:85, T13.70:0 and T15:0. The column oven temperature was maintained at 40ºC. The detector set at 230 nm. The chromatogram is depicted in Figure 6. 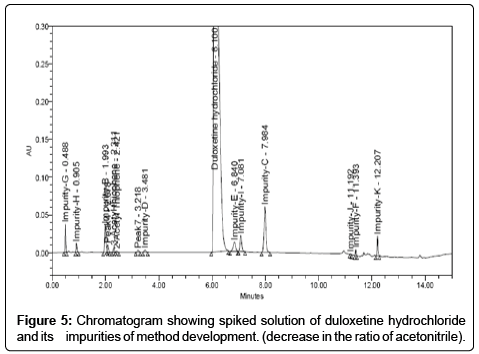 Figure 5: Chromatogram showing spiked solution of duloxetine hydrochloride and its impurities of method development. (decrease in the ratio of acetonitrile). 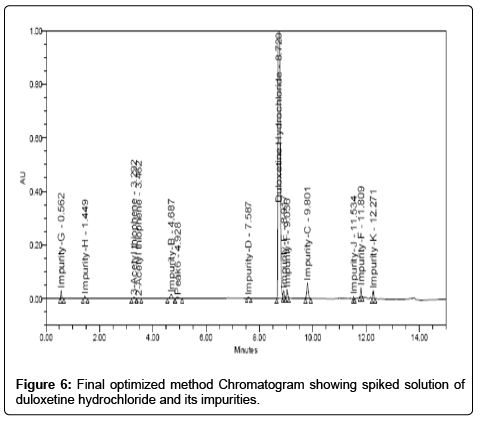 Validation of the Method

The determined detection limit, quantitation limit and precision at QL values for duloxetine hydrochloride and its impurities are reported in Table 2.

The recovery of duloxetine hydrochloride impurities ranged from 93.28-102.41%.

For all duloxetine hydrochloride impurities, a linear calibration curves was obtained ranging from QL to 0.3% (QL, 50%, 75%, 100%, 125%, 150% and 200%). The correlation coefficient obtained was greater than 0.999 (Table 2). The linearity was determined over three consecutive injections, which confirmed the linear relationship between the peak areas and concentrations. The linearity range was QL to 200% with respect to 1.0 mg/ml of duloxetine hydrochloride. The results indicate clear linearity.

In all the deliberately varied chromatographic conditions (flow rate, column temperature and pH variation), all of the analyte were adequately resolved, and the order of elution remains unchanged.

The rapid gradient UPLC method was developed and validated for duloxetine hydrochloride and its impuritiesis precise, accurate, linear, robust, and specific. Satisfactory results were obtained from the validation of the method. The retention time 8.7 min enabled rapid determination of the drug and successfully developed a novel method for separation of duloxetine hydrochloride 12 impurities in a single run with in a shorter time about 15 min.This method exhibited excellent performance in terms of sensitivity and speed. It was observed that this method is vividly cost effective when compared to pharmacopeia method. Also, it was found that few impurities were not separated as per pharmacopeia method. Therefore, this method indicates stability and was found to be the best suitable method for routine analysis of production samples.

The authors wish to thank the management of Deepta Laboratories, Mysore and Anvita G.P, for their constant support and encouragement providing necessary facilities to carry out this work.