Copyright: © 2017 Kokubo Y, et al. This is an open-access article distributed under the terms of the Creative Commons Attribution License, which permits unrestricted use, distribution, and reproduction in any medium, provided the original author and source are credited.

Amyotrophic lateral sclerosis and parkinsonism-dementia complex (ALS/PDC) is an endemic and rare neurodegenerative disease common in the Kii peninsula, Japan and the Guam Island [1-3]. ALS/PDC clinically shows combination of Parkinsonism, dementia and motor neuron symptoms and neuropathologically accumulation of tau, α-synuclein and transactivation responsive region (TAR)-DNA-binding protein of 43 kDa (TDP-43) in the central nervous system. Parkinsonism of ALS/ PDC is clinically indistinguishable from that of Parkinson’s disease (PD), except for L-DOPA resistance. Neuroradiological background regarding Parkinsonism of Kii ALS/PDC has not been investigated so far. We conducted a positron emission tomography (PET) study using 11C-2-b-carbomethoxy-3b-(4-fluorophenyl) tropane (CFT) and 11C-raclopride (RAC) in two patients with Kii ALS/PDC to evaluate preand post-synaptic dopaminergic function. 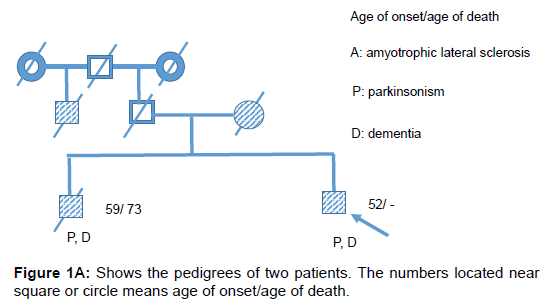 Figure 1A: Shows the pedigrees of two patients. The numbers located near square or circle means age of onset/age of death. 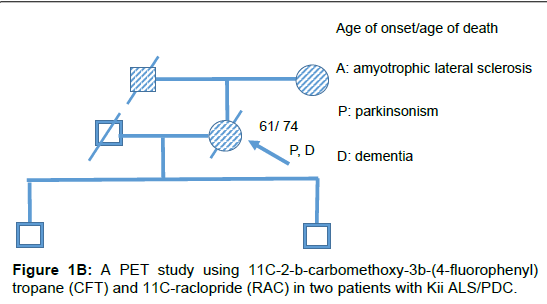 CFT-PET study of both patients revealed marked pre-synaptic dopaminergic dysfunction, suggesting severe neuronal degeneration of the substantia nigra, consistent with the neuropathological findings of patient #2. The RAC-PET study also revealed mild post-synaptic dysfunction, suggesting neuronal degeneration within the corpus striatum. Furthermore, L-DOPA-resistant Parkinsonism after the short period of effectiveness may be related not only to the degeneration of the corpus striatum but also to that of the pallidum and thalamocortical pathway, consistent with the neuropathological findings of patient #2. These pre- and post-synaptic dysfunctions may be related to tau and α-synuclein pathology and neuronal cell loss in these lesions [7].

Snow et al. reported PET study using 18F-6fluorodopa on four Guamaninan ALS, eight Guamanian PDC and seven clinically normal Guamanians and observed severe pre-dopaminergic dysfunction in Guamaninan PDC, moderate in Guamaninan ALS and mild even in clinically normal Guamanians. They insisted that nigrostriatal dopaminergic lesion in Guamanian Parkinsonism is difficult to discriminate from that in idiopathic Parkinsonism [8]. Taken together with Snow’s report and our report, severe pre-synaptic dopaminergic dysfunction was revealed common feature between Kii ALS/PDC and Guam ALS/PDC. The post-synaptic dopaminergic function has not been examined in Guam ALS/PDC patients, therefore we could not comment on the utility to provide a differential diagnosis, based on dopaminergic PET imaging. There is no PET study regarding ALS/PDC in Papua state in Indonesia.

Regarding discrimination from other Parkinsonism, these patterns of pre- and post-synaptic dopaminergic dysfunction of Kii ALS/PDC were similar to those of progressive nuclear palsy (PSP), as shown by the decreased uptake of CFT-PET and relatively spared uptake of RACPET [9]. Thus, Kii ALS/PDC may be discriminated from PD, wherein preserved post-synaptic function and obvious laterality is observed, and multiple system atrophy, wherein severe post-synaptic dopaminergic dysfunction exists [8]. And to discriminate from PSP, other clinical findings and neuroimaging study, like preserved eye movement or decrease of iodine I 131 metaiodobenzylguanidine (MIBG) uptake in Kii ALS/PDC [10,11], are useful.

The authors thank Ms. Junko Karita for clerical assistance. The authors would like to thank Enago (https://www.enago.jp/) for the English language review.

Drs. Kokubo, Ishii, Morimoto, Mimuro, Sasaki, Murayama and Kuzuhara report no disclosures. There is no ghost writing by anyone not named on the author list. This study was approved with the ethics committee of Mie University Hospital, Tsu, Mie, Japan and written informed consent was obtained from all patients and/or their families prior to the study.

This study was partly supported by grants-in-aid from the Mie Medical Fund (to SM, YK), Japan Foundation for Neuroscience and Mental Health (to YK), the Research Committee of CNS Degenerative Diseases (to YK) and the Research Committee of Muro disease (Kii ALS/PDC) (to YK 21210301), Ministry of Health, Labor and Welfare, Japan, by a grant-in-aid for Scientific Research from the Ministry of Education, Science, Sports and Culture (to YK), and by a grant-in-aid of the Research Consortium of Kii ALS/PDC from the Japan Agency for Medical Research and Development, AMED (to YK), Japan.