Down Syndrome - Onset Age of Dementia

Copyright: © 2017 Arvio, et al. This is an open-access article distributed under the terms of the Creative Commons Attribution License, which permits unrestricted use, distribution, and reproduction in any medium, provided the original author and source are credited.

Background: Alzheimer’s disease is the most common cause of death in people who have Down syndrome. This prospective, population-based, 15-year follow-up study aimed to define the onset age of dementia. Methods: At baseline 98 adults were screened for the first time by using the Present Psychiatric State-Learning Disabilities assessment. These screenings were repeated twice more during the study. Results: The indicative signs for dementia increased rapidly after the age of 35 and appeared most frequently as reduced self-care skills, loss of energy, impaired understanding and forgetfulness. Conclusion: Regular follow-up of people who have Down syndrome from the age of 30 onward enables appropriate interventions to delay the progression of dementia.

Down syndrome (DS) is the most common genetic cause for intellectual disability. Those with DS represent 10 to 15% of all people who have intellectual disabilities [1]. DS is characterized by a delayed development in childhood, a premature aging in adulthood, and a risk of early dementia with Alzheimer’s disease (AD), which is also the most common cause of death in this population [2-4]. In spite of a well-known clinical course of DS there are currently only limited symptomatic treatments available for AD in DS [5]. The emerging evidence suggests that various environmental risk factors such as chronic inflammation present potential treatable interventions for individuals with DS at risk for AD [6,7].

According to the literature AD neuropathology is observable in virtually all individuals by the age of 40 years [8,9], after which there is generally thought to be a prodromal or asymptomatic phase when AD pathology progressively accumulates so that clinical dementia is usually recognized within an age range of 48 to 56 years [10,11]. However, the results from our recent paper with 27 years follow-up of 45 adults with DS suggested that the turning point in the course of adaptive skills occurs already at the age of 35 [12]. Our present, partly concomitant to the aforementioned study, screened clinical signs of dementia aiming to define the onset age of dementia in 98 adults during 15 years followup period.

In the late 1960’s Finland was divided into 16 state-supported regional full-service districts, providing residential care, education, rehabilitation, medical follow-up, shelter work, and day activity for individuals who have intellectual disabilities. In 2000, the client register of the South-Häme district with a total population of 340,000, included names of 229 people who have DS; from those all 115 that were older than 23 years were invited to participate this study.

During the follow-up period two special nurses visited peoples’ homes three times, in 2001, 2012 and 2016 and used the British Present Psychiatric State-Learning Disabilities assessment (PPS-LD) for screening [13,14]. This PPS-LD questionnaire (incl. 27 items) was used in this survey as it has been used in our country for the diagnosis of dementia, particularly among people who have intellectual disabilities [15,16].

The Pirkanmaa Hospital District’s ethics committee has reviewed and supported our study. We have received a written informed consent from each participant or from their caretaker.

At the baseline, 98 of the 115 invited adults were willing to enroll the study. Of these, 19 had participated also in our second parallel followup survey [12]. During the 15 year follow-up period, the number of study participants decreased (Table 1). Five adults, who were alive at the end of the study refused to participate all three assessments and 52 adults died. The age at death of 27 deceased women ranged from 36 to 67 (median 57) and of 25 men from 29 to 71 as expected (median 57).

At the baseline 78% and at the end of the study 93% of the adults had one (or more) longstanding health problem(s) (Table 1). 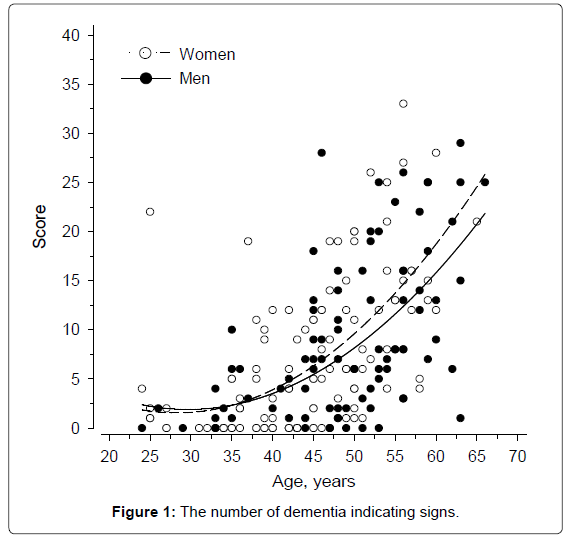 The dementia signs increased rapidly after the age of 35 (Figure 1). Of the 98 participants, 43 underwent all three assessments. The division and number of their dementia signs at baseline and at the end of the study are presented in Table 2. The most commonly occurring symptoms were reduced self-care skills, loss of energy, impaired understanding, and forgetfulness. Local physicians had prescribed acetylcholinesterase inhibitor or memantine to 16 out of 27 adults who had been diagnosed with AD; according to the sparse available documentation the medication was discontinued in three adults because of poor response.

Table 2: The division of dementia signs in 43 people with all three evaluations.

Our recent study suggests that the adaptive skills in people with DS start to deteriorate at the age of 35 [12] and the current findings indicate that also the first signs of dementia appear at the same age. These long-term longitudinal observations do dispute the prevailing understanding that neuropathology [8,9] occurring concomitantly with a prodromal or asymptomatic phase precedes clinical dementia [4,10,11]. It can be speculated here whether the lack of this kind of long-term clinical data and/or the varying clinical follow-up methods utilized in different countries could explain this evident discrepancy between our results and the findings published by the others.

In spite of a well-known association between AD and DS there are no clinical guidelines for the health management of this specific disorder. Firstly, the role of pharmacotherapy is unclear [17]. Secondly, there are practical hindrances for the use of AD medication. For example, here in Finland brain imaging is required for the reimbursement of AD medication even though clinical diagnosis of dementia in people who have DS has been considered valid and reliable [18]. This results in an inevitable problem. Because of non-compliance the imaging cannot usually be done without a general anesthetic and, thus, it is often not done. Consequently, only a small portion of those who have DS and AD may literally end up taking an appropriate AD medication. For example in this study only 60% of the those with diagnosed AD were on appropriate medication and only 13 out of 16 patients had continued the prescribed medicine. On the other hand, AD is known to be the leading cause of death in DS [3,4] as confirmed also by this survey. All this indicates the urgent need for further studies to find out what the most cost-effective treatment options would be.

Currently, most of the Finnish adults who have intellectual disabilities live in subsidized housing units and they have (unlike general population) usually undergone several psychological tests during their adolescent years making it rather easy to recognize any change there may occur later on in their cognition. We have found PPS-LD form used in this and other studies (related to fragile X and Williams syndromes) useful and simple for identification of early signs of dementia when this evaluation form is completed at regular intervals by a carer, who has known the person for a long time. Perhaps, this kind of long-term care by the same nurse explains why the first dementia signs were recognized at clearly younger age in our study than in the surveys conducted by the others (i.e. 35 versus 48-56 years) [4-7].

Early recognition of dementia can be claimed to be of uttermost importance, because any deterioration in daily performance due to some treatable but undiagnosed condition may result in institutionalization. Once some ailment in memory has been observed, it does not necessarily reflect the onset of AD. For example, depression, sleep disorders, B12-vitamin deficiency, hypothyroidism, urinary tract infections or polypharmacy may be the underlying causes behind the first dementia signs. Even an aggressive form of periodontitis has been suggested as one modifiable risk factor for AD in DS population [6]. In other words, without regular follow-up records the initiation of appropriate medical examinations and consequent interventions [19] may be delayed with undesired long-term consequences. On the other hand, the recent advances in understanding the molecular basis of ID and pathogenesis of AD can be expected to yield new therapeutic interventions [5]. All this together with our results and clinical experience emphasize the importance of active health management of people with DS in order to improve their general wellbeing and to extend their period of living at home.