Common bunt (CB) caused by Tilletia caries (D.C.) Tul . (=T. tritici ) and T. foetida (Wallr.) Liro (=T. laevis ) can cause severe wheat grain yield losses. It decreases grain yield and quality as the bunt balls replace the grain with brown to black unpleasant smelling spores [1]. Kernels infected by this pathogen are usually rejected by millers as very low infection rates can result in noticeable odours in flour milled from CB-infected wheat. Common bunt can be effectively managed with fungicidal seed treatments. However, fungicidal seed treatments are not used widely due to cost in low input agriculture or in the organic fields due to its requirements. In addition, the fungal pathogen can produce new fungicide-resistance races. For economical and production reasons, it is useful to produce resistant cultivars through breeding programs rather than relying on fungicides [2,3].

Estimating the level of CB resistance is time consuming due to the need to wait until the symptoms are expressed. Symptoms happen when the grain filling period is nearly complete (Feekes 11.3 and 11.4). The symptoms sometimes are only expressed on the last spikes formed, and the symptoms often are only expressed in a few of the florets [1]. So, understanding the effect of the CB on earlier agronomic traits would help in identifying the trait associated with the resistance and hence the ability to select resistant genotypes earlier rather than waiting until plant maturity. For example, it was reported that CB has an effect on plant height, number of heads and root length [1,4]. In addition, understanding the differential response of the resistant and susceptible genotypes to the CB infection would help farmers recognize the resistant genotype at an earlier developing stage and possibly allow them to remove the susceptible genotype before it produces new spores. This technique will help low input farmer reduce the spread of the CB spores and decrease the number of infected plants in the following season.

A set of nine Egyptian bread spring wheat cultivars from diverse backgrounds were used to study the effect of CB on some important agronomic traits (Table 1). The tested cultivars had never been tested to Nebraska CB race, hence their reaction to this pathotype was unknown, but was expected to be susceptible. Because of this concern, two Nebraska winter wheat lines that were known to be very resistant to CB (with infected heads 0%, preliminary data) were included in order to be able to identify if there are differences between the response of resistant and susceptible genotypes to CB inoculation. A spring susceptible check (“Red Bob”) was included to confirm the effectiveness of the CB inoculation protocol.

Table 1: List of the Egyptian cultivars included in the study of the effect of common bunt inoculation.

The tested genotypes were planted in the greenhouse with two treatments, control and CB inoculation, in three replications each. Four plants were planted in each pot. The inoculation was done using the method of Goates (1996) by mixing the kernels with the teliospores, putting them in an envelope and shaking until the kernels were fully covered with the spores. This method was reported as an effective method to inoculate small amount of seeds, from five to twenty grams. The experimental design was randomized complete block design (RCBD, 3 replications × 2 treatments × 11 genotypes). All the three replications were placed in the vernalizer for two months at 4°C to provide optimal conditions for the T. caries and T. foetida spores to infect the seedling plants and high levels of infection to occur. After two months, the plants were transferred to a warmer house (at 16 [night] - 25ºC [day]) to provide good environmental conditions for wheat plant development. The genotypes were fertilized as recommended.

Measuring of the studied traits

For each control and inoculated genotype, the following traits were recorded

This trait was visually recorded using a scale extending from 1 (weak seedling) to 9 (strong seedling) at seedling stage.

This trait was scored by recording the date from seeding to when 50% of the tillers in each pot were at 10.1 Feekes scales and had heads fully emerged from the boot.

The plant height was measured during ripening stage (Feekes stage 11) as the height of the plant from the ground to the tip of the head, awns excluded.

The length of the head was measured from the base of the head to the tip (awns excluded) after the plants completely emerged and no further growth was expected (Feekes stage 10.5).

This was measured as the number of days from planting until 50% of the plants had completely mature heads (colour changed from green to tan).

This trait was measured by counting all the tillers with spikes in the pot and dividing by the number of plants in the pot.

This trait was measured on mature plants that had not been watered for seven days as the average weight of the whole plants (including roots) after the soil was carefully washed from the roots and dried.

This trait was measured as the average length of the main root in all the plants/ pot.

Common bunt resistance was scored on each genotype as follow

The level of resistance was determined using the following scale:

Data from both control and inoculated plants for the nine spring genotypes were combined and analysed using PLABSTAT software using the following model.

Where Yijk is an observation of genotype i in replication j under treatment k, μ is the general mean; gi, rj, tk are the main effects of genotypes, replications, and treatment, respectively; eijk is the error.

where σ2G and σ2R are the variance of the lines and the residuals and r is the number of replicates.

Evaluation of the CB resistance 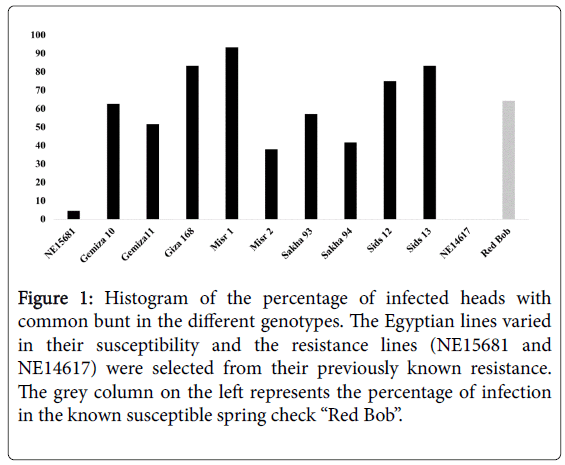 Comparing seedling vigour for the control and inoculated treatments, all the genotypes had more vigorous seedlings after CB infection (Table 3). The seedling vigour in the control treatment ranged from 1.00 to 2.67 with an average of 2.00, while it ranged from 6.50 to 9.00 with an average of 8.00 for the inoculated genotypes (Figure 2). All the genotypes had the same interaction with the CB infection as all of them had higher vigour under inoculated conditions than the control. The more vigorous seedlings under CB infection may be explained by the effect of the fungus on cell division. Previous research suggested that IAA and cytokinin levels increased during early fungus development on wheat callus tissues [9]. Common bunt inoculation was found to have a highly significant effect on days to maturity. No significant differences were found between the tested genotypes. However, a significant interaction between the genotypes and the treatment was found in the spring genotypes (GxT) which indicates that the genotypes have a different response to the inoculation. These results can be explained by all the spring genotypes were delayed in the maturity under CB infection compared to the control conditions, except for two genotypes, Misr 1 and Sids 13, which were severely infected and had earlier maturing plants under the infection than the controlled conditions (Table 3). Number of days to maturity ranged from 133.67 to 170.70 days with an average of 153.09 under the control conditions. It ranged from 147.00 to 174 days with an average of 157.59 days under the CB infection conditions. Goates (1996) mentioned that wheat heads under CB infection usually stay green for a longer time compared with the uninoculated heads under the same conditions which indicated the delaying of maturity under the infection conditions. Based on our results which were in general agreement with Goates (1996), the presence of two susceptible genotypes with earlier maturity under CB and a very high percentage of infected heads (93 and 83%, respectively) suggested that under severe infection infected heads do not always stay green for a longer time.

Comparing the response of the nine susceptible spring genotypes and the two winter resistant genotypes to the CB infection, we found that no clear differences in the response for all the studied traits except for the root length (Figure 4). Unlike the susceptible genotypes, the resistant genotypes had longer roots under the inoculation conditions than their root length under the control conditions (Figure 3). No previous studies explained the mechanism of CB resistance in wheat plants. However, some studies concluded the increasing of lipase gene, PR-1a and chitinase A, and a β -1,3-glucanase proteins in the tissue of resistance seedlings which are isogenic for Bt10, CB resistance gene [10]. The higher abundance of chitinase protein in the root tissue was found to play a significant role in increasing the root growth by increasing the protein folding and degradation in the root [11]. This effect of chitinase protein could be a plausible reason for increasing the root length in the resistant genotypes under CB infection than its length in the susceptible genotypes. 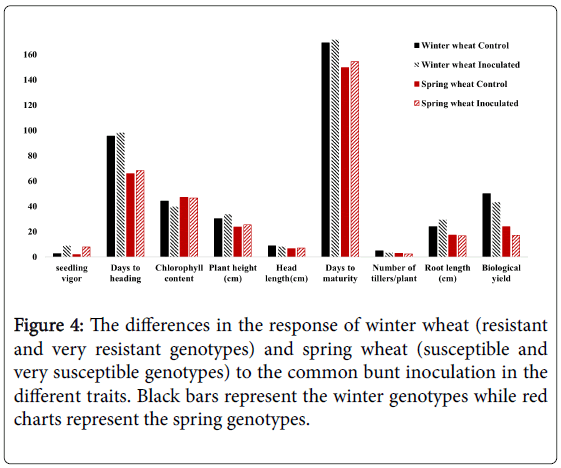 In conclusion, the CB infection was found to increase the seedling vigour, delay the heading date, increase the head length, increase the root length and decrease the biological yield in the tested genotypes. The resistant genotypes were found to have longer roots under the CB infection compared with their root length under the control conditions. However, a reduction in the root length was found in some susceptible genotypes due to the CB infection. Due to the difficulty in measuring the root length and the different response of the susceptible genotypes, this trait is not a useful trait for the early prediction of CB resistance. However, root length, after being confirmed with additional resistant genotypes, may still be used as a preliminary indicator to identify the resistant genotypes in breeding programs especially when evaluating the genotypes under greenhouse conditions. The absence of the differences between the response of resistant and susceptible genotypes in other agronomic traits confirmed the difficulty of early prediction and selection of CB resistance genotypes. Hence the most accurate selection of resistant lines still requires waiting until the end of the growing season to identify resistance.

The author would like to thank Richard Little, a technologist at Agronomy and Horticulture department, UNL, USA, for his help in common bunt inoculation. This work was financially supported by cultural affairs and mission sector, the Egyptian government.