Golden Mahseer (Tor putitora) is one of the most important endangered fish species of Bangladesh. Once the fish was widely distributed throughout Bangladesh, India, Nepal and Pakistan, considered as a popular sports fish for this region [1]. This fish is highly popular for its qualities and test. Once these fish contribute a significant amount in total fish production of The Indian subcontinent [2].

Tor genus consists of more than 20 other species which are not yet scientifically identified [3]. Two species of these, Tor tor and Tor putitora are available in the hilly streams of Sylhet, Mymensingh, Dinajpur and Chittagong districts in Bangladesh [4]. The fish is habituated with a wide range of temperature, from semi-cold waters of foot hills to warm waters. The body is stout and bearing medium to large size barbs and attains nearly 3 m in length and 45 kg in weight [5]. By nature it is omnivorous but in early stage of life, it show carnivore feeding habit and feed on zooplankton, other fish larvae, insects etc. adult Tor mainly feed on other fish larvae, small mollusks and algae grow on rocks [6]. Tor species prefer sandy ground with small rocks for breeding with high oxygen and comparative higher oxygen from other parts of its habitat [7]. November to January is the main breeding season of this species in Bangladesh [8]. T. putitora is a low fecund fish compared with other carp species and its fecundity ranges from 8000 to 12,000 eggs/kg [9].

Due to prolonged drought, frequent devastating floods, siltation and soil erosion in the hilly rivers, reservoirs and man-made changes i.e. construction of flood control measures and drainage structures, dumping of agrochemicals and industrial pollutants, indiscriminate and destructive fishing practices in the aquatic ecosystem the natural stocks of Mahseer fishes have declined. These calamity damage the natural breeding ground and also destroy the nursing ground, feeding habitat; in a word destroy total population of this species [9]. This fish are now enlisted as a critically endangered species [10]. Now it’s urgent needed to protect this fish from declining. Not only the habitat degradation natural habitat, also the non-availability of fry and spawn due to improper nursery management system also an important cause of declining. This fish has also great potential and high demand for poly culture with other carps. But due to in sufficient supply of fry the culture system didn’t develop properly. Bangladesh fisheries research Institute working on this fish from many years and develop its breeding protocol, single stage nursery system [9, 3, 6]. But to develop proper nursery management system it is also essential to develop fry culture system or secondary nursing system. Growth, survival and production of spawn and fry in ponds depend on stocking density, type and quantity of fertilizers and supplementary feeds. Therefore, the present study was undertaken to assess the effects of stocking density on T. putitora fry under controlled condition

The experiment was conducted in the Muktagacha sub district, Mymensingh district, Bangladesh, during the period from 31 December to 10 March 2019 (70 days). Nine earthen ponds of 0.04 ha (40 × 10 m) with 1m depth were selected for the experiment. Three treatments with three replication were considered under Complete Randomized Design (CRD) for this experiment. Thirty days old fry were stocked at the rate of 1.0 × 105/ha was designated as treatment-1 (T1), 1.5 × 105/ha as treatment-2 (T2) and 2.0 × 105/ha as treatment-3 (T3), respectively with three replications each.

The ponds were prepared following standard management practices [11,3,6]. Ponds having proper inlet and outlet facilities were cleaned and dry under sunlight to remove aquatic vegetation and all unwanted species. After drying 250 kg/ha lime was applied over the pond bottom. And after seven days of liming, ponds were filled with groundwater at 1m depth. Then 25 kg/ha urea and 50 kg/ha TSP were applied to produce the live feed for the spawn. Seven days after fertilization a fine mesh net used to remove harmful insect and predatory zooplankton. Thirty days old spawn of T. putitora obtained from Bangladesh Fisheries Research Institute (BFRI) hatchery were stocked in experimental ponds (Average length 3.12 ± 0.65 cm and average weight 1.12 ± 0.12 g) according to the experimental design. Spawn was fed with commercial feed two times daily at the early morning and evening. For 1st week 10% feed of total body weight was applied while the amount of feed increasing continuously but the percentage of feed decreasing 1% per week. Amount of feed adjust with weekly sampling of experimental fish. Moreover, ponds were fertilized every seven days with 12.5 kg/ha urea and 25 kg/ha TSP respectively.

Table 1: Proximate composition (% of dry matter) of the supplementary feed.

The important physico-chemical parameters of water viz., water temperature, pH, Dissolved Oxygen (DO), total alkalinity and ammonia were analyzed at every seven days interval to ensure that water quality was within permissible limits. The samples for the study were collected between 08:00 and 09:00 h.

Spawn was collected weekly with fine-meshed net for growth analysis. At the 71 day of the experiment all fry were collected to calculate the final length, weight and survival. 20 (twenty) fishes were randomly selected from each pond to determine the growth and survival.

Estimation of length and weight

The growth and survival details of three treatments along with the initial and final particulars are presented in Table 3. In the experiment, T. putitora attained maximum length and weight in the lowest stocking density of 1.0 × 105/ha in T1 followed by T2 and T3 with the stocking densities of 1.5 × 105 and 2.0 × 105/ha, respectively (Figures 1 and 2). It was also observed higher daily weight gain in the lowest stocking density in T1 followed by T2 and T3, respectively. There were significant (P<0.05) differences in final length of T1, T2 and T3. In the case of final weight gain and daily weight gain, T1 was significantly compared with T2 and T3; T2 and T3 also had significant differences. The highest survival rate (79.66 ± 4.34 %) also observed in the lowest stocking density (T1) (Figure 3). All treatments were implemented under the same environmental conditions and feeding was same. Ponds size and depth were also same for all treatments. Nursery management procedure was also the same for all the treatments. Only the stocking densities were different among the treatments and shows significant difference in final length, weight and Daily Weight Gain (DWG). 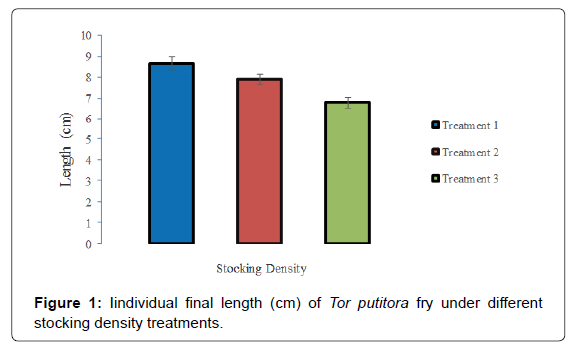 Growth in terms of length and weight was maximum at the lower stocking density and showed a significant decreasing trend with an increase in stocking density (P<0.05). It is empirical that stocking density has a direct effect on food supply, space for living and water quality. Different studies indicate that there was a significant inverse linear relationship between stocking rate and growth linked such depression in growth to unavailability of proper space [13,14,6]. Physiological stress may also cause poor growth performance under high stocking densities as observed in Catla catla and Labeo rohita in cage culture [14]. Low water quality also causes poor growth in some cases of fry rearing [15]. In this experiment, the values of different water quality parameters were generally within the optimum requirements for the nursery rearing of Mahseer spawn [6]. In the present experiment, no distinct variations in the water quality parameters were observed at different stocking densities indicated that increasing stocking densities did not impose any environmental stress to the fish. There were the same findings also observed in Carassius carassius on growth and survival of primary nursing system [16]. However, the level of Dissolve Oxygen (DO) was optimum in experimental ponds. Alkalinity level indicates the natural production of these ponds were moderately high, which is closed to [17,3]. Higher alkalinity values might be due to the higher amount of lime doses at the experimental period. The pH level of this experiment was optimum for the fish culture [6].

In this experiment, crude protein level having 32% dry weights were used in supplementary feeding for Tor putitora spawn. For the growth of Labeo rohita spawn optimum protein requirement is 36% [14]. 34.11% crude protein use in the one stage nursery management system of Gold fish [18]. Supplementary feeds containing 20.3-29.5% crude protein for a semi-intensive culture of T. putitora record the lower growth performance [17].

High growth performance was observed in terms of weight; length and weight gain of Tor putitora spawn in T1 where the stocking density was lower as compared to T2 and T3, although same food was supplied at an equal ratio in all the treatments due to the reason of competition for food at higher density treatments. T1 having low density considering the suitable stocking density for the fish growth in nursery pond, as the number of spawn increases for the same stocking area, its effects the growth performance of Mahseer [6]. The treatments having great number of spawn with a high food concentration cause a stressful situation [7]. The highest weight gain of Mahseer (Tor putitora) fry and Crucian Carp (Carassius carassius) in nursery ponds in lowest the stocking density [7, 15]. The highest survival in showed in lowest stocking density under single stage nursery system of Mahseer (Tor putitora) [3] the same result observe in Crucian Carp (Carassius carassius) in primary nursery system [16].

The low density of Tor putitora fry that shows higher growth compare with higher density. Because higher density treatments fry have higher competition for food and space [13, 19]. Further research should be done on stocking densities of this critically endangered species to understand the growth and survival in culture system of T. putitora.

From the above findings of this experiment, it can be concluded that the length and weight gain of T. putitora fry were inversely related to the stocking densities. Decreasing with the stocking densities result increasing with length and weight. Finally, present findings of this experiment might be helpful for the fry production of T. putitora and take a little step to commercialization of its culture.

Copyright: © 2021 Riar GS, et al. This is an open-access article distributed under the terms of the Creative Commons Attribution License, which permits unrestricted use, distribution, and reproduction in any medium, provided the original author and source are credited.