The purpose of the present study was to investigate whether cognitive behavioural therapy and applied behaviour analysis can be effective in reducing aggression level in adolescents. Moreover, a comparison was made, between both treatment procedures to ascertain the effectiveness of both approaches for evaluating the effectiveness and change in aggression as outcome. It was hypothesized that there will be a significant difference in the post aggression level of adolescents undergoing cognitive behaviour intervention and applied behaviour analysis and also that there will be a significant difference in the effectiveness of between them in reducing aggression. For this purpose, a sample of 14 participants was recruited with age range between 13 to 18 years. The Beck anger inventory-youth (BANI-Y) version was administered to screen the competitive participants who fulfilled the inclusion criteria of research. After consent for participation and demographic information, the sample was divided into two groups, containing equal number of participants (n=7). The Cognitive behavioural therapy intervention participants received 10 minimalized individual sessions based on cognitive behaviour therapy for anger management for substance abuse and mental health clients by Patrick Reilly, Shropshire, (2002). Each individual session duration was about 60 minutes and the continued for 10 consecutive weeks. However, the applied behaviour intervention group received intervention in four phases. The observation phase of 5 days which was followed by 10 days of intervention phase in which targeted behaviour was reduced by use of differential reinforcement of low rate of behaviour. After intervention phase, post intervention phase continued for 5 days which evaluated the after effects of intervention and lastly follow up of 5 days which as conducted after 1 week of intervention. Results obtained were analysed using Statistical Package for the Social Sciences using t test, and pair sample t test to test the statistical significance of the relationship of the variables. Findings showed that both cognitive behavioural therapy (p=0.020) and applied behaviour analysis (p=0.024) were effective in reducing aggression in adolescent, however no significant results were obtained in favour of either one of them as more effective over other (p=0.350). Further, no significant difference was found in effectiveness of change of aggression as outcome of both therapies (p=0.273). Significant implication of the present study includes using specialities of these therapies with adolescent population by including them in psychotherapeutic as well as in educational process.

In three noteworthy urban communities of Pakistan, pervasiveness of aggressive abuse were referred to as physical (57%) and verbal (59.2%) alongside physical fight (47.1%) prompting wounds. Notwithstanding, physical and verbal misuse were likewise observed to be connected with psychological stress and poor mental health [3]. In this manner, the pervasiveness needs suitable thought as mental issue and should be catered by psychological means and interventions.

Psychological therapies form an integral part of health planning and cognitive behaviour therapy (CBT) inclines to be seen as the first line treatment for psychological and psychiatric disorders and illnesses [4]. Cognitive and behavioural mediations have continuing impacts that diminish hazard for resulting side effect return taking after treatment end while other psychosocial intercessions remain to a great extent unconfirmed, in spite of the fact that affirmations that they deliver strong change have for quite some time been made [5]. Recovery rates of 40 to 50 per cent among 2 to 5 years of age kids who experienced through techniques of applied behaviour analysis in any case, huge change in youngsters who began later by the age of 7 to 8 years was additionally recorded. Notwithstanding this, 40 per cent of kids were mainstreamed with little support [6]. The objective of study was to investigate whether cognitive behavioural therapy and applied behaviour analysis can be effective in reducing aggression in adolescents along with comparing the effectiveness of each mode of therapy among 13 to 18 years old adolescents.

A comparative analysis was conducted on adolescents in which both treatment procedures i.e. CBT and ABA for aggression on equal number of participants (n=7) was tested. Adolescent participants included 14 individuals with age range of 13 to 18 years, who were currently enrolled in private educational institutions. Written inform consent has been take from parents and participants to seek formal permission for participation. Adolescents included in study had at least 6 months history of observable aggression, mood swings, anger outburst and behavioural issues. Further, participants were screened on Beck anger inventory for youth (BANI-Y) and those who scored moderately elevated to elevated range were included to be part of study. Participants with severe aggression, hitting or impulsive behaviour, drug abuse and psychiatric history were excluded.

Participants were selected from a private educational setup via a lecture for behavioural issues and emotional regulation in adolescents. After lecture, BANI-Y inventory was distributed among students to screen out potential participants, selected participants were given consent form and information regarding participation and demographic information was gathered. Brief medical and psychiatric history, family and academic history was also obtained.

Selected participants were randomly divided into two treatment groups i.e. CBT and ABA. Each group consisted of 7 individuals including 4 male and 3 female participants. In CBT group, each participant was given an individual 60 minute session based on manual for anger management for substance abuse and mental health patients by Patrick M Reilly and Michael Shopshire [7], once per week. They were also provided with Participant Workbook [8] by modifying it with respect to individual therapy mode.

CBT group participants had undergone 10 sessions of therapy in which each 60 minute session was divided into 4 parts (Graph 1). It included check in process, objective or goal setting, delivering key concepts and suggested remarks and homework. Each session was started with review of past week and overall reporting of participant’s aggression. After check in process, goal setting and agenda of current session was discussed. Each session included agenda based on both therapeutic exercise and coaching in accordance to manual. By the end remarks were obtained and homework for next session was prescribed. Each participant was further asked to keep rating themselves on aggression meter throughout therapeutic process. 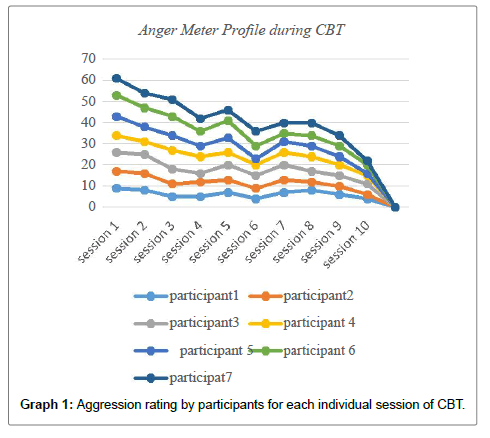 Graph 1: Aggression rating by participants for each individual session of CBT.

However, participants who received treatment in accordance to ABA plan undergone through 4 stages i.e. observation phase, intervention phase, post intervention phase and follow up (Graph 2). In observation phase each participant was simply observed for 5 consecutive days to notice the most existing aggressive behaviour. After observation, the intervention phase began in which each aggressive behaviour was reinforced by applying differential reinforcement of low rate of behaviour (DRL). According to operational definition, any action that depict physical violence (biting, hitting, kicking), verbal hostility (shouting, calling names, teasing, threatening, swearing), nonverbal intimidation (making threatening gestures) and destruction of property by individual was weaken by reinforcing the participant when he or she depicted low rate of aggression in given time period. Reinforcements included both social (appreciation, good remarks), physical (hand gestures) and tangible rewards including eatable items. After intervention, post intervention lasted for 5 days that included no reinforcement. To evaluate long term effects of DRL, follow up was conducted after a week of termination. Aggressive profile was made for each participant to rate the increase of decrease in aggressive behaviour in each phase of treatment. After completion of both therapies, students were re-evaluated on BANI-Y questionnaire in order to compare outcomes. 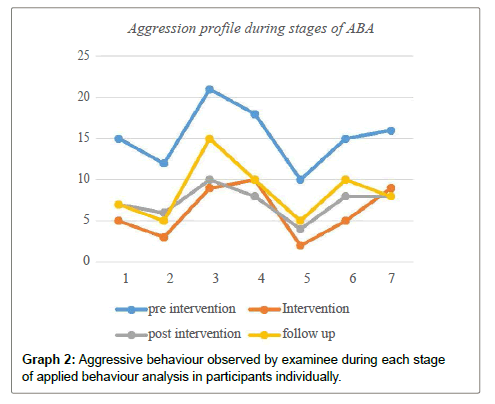 Graph 2: Aggressive behaviour observed by examinee during each stage of applied behaviour analysis in participants individually.

A total of 14 participants were included in the study with no drop out during the course of study. The overall results for each group thus, consists of n=7 participants each who were examined at two points i.e. at pre aggression and post aggression level.

Demographics of the sample population

Further investigate the effectiveness and to highlight the difference comparison has been evaluated to see whether CBT or ABA is more effective in tacking the aggressive issues in adolescents (Tables 1-6).

Table 1 presents the demographic information of total participants (n=7) in CBT group in the study.

Table 1: Demographics of the sample population of the cognitive behavioural therapy participants (n=7).

Table 2 presents the demographic information of participants (n=7) who were part of the ABA group.

Table 3 presents the change in aggression in participants who undergone CBT intervention. The results revealed significant (p ≤ 0.02) decrease in aggression after therapy.

Table 3: Descriptive Statistics and paired sample t-values of change in aggression before and after therapy incognitive behavioural therapy group.

Table 4: Descriptive Statistics and paired sample t-values of change in aggression before and after applied behaviouranalysis intervention.

Table 6 presents the internal consistency of the Beck Anger inventory (youth version) Questionnaire before and after treatment for all the participants.

Table 6: Cronbach’s Alpha of Beck Anger inventory (youth version) questionnaire before and after treatment for the total sample.

Aggression is among the most prevailing and exasperating concern in adolescence to deal with. The investigation sought that both the procedure of cognitive behavioural therapy and applied behavioural analysis produce positive results in reducing post aggression however, the difference in appreciating the more suitable form of treatment was non-decisive. As CBT is more structured form of therapy and on other hand, ABA includes concepts of reward and punishment which has pronounced impression on human motivation to perform certain desirable activities; however, the impact they create can have adverse effect on intrinsic motivation and task related performance [9]. Beck’s renowned cognitive behavioural concept on other hands is individualistic in nature, which relies on problematic behaviour by promoting alliance and relationship between therapist and patient to produce a well observed behavioural change by altering cognitions and defining errors. However, cognitive behavioural therapy remains constant for variety of patients but is subjected to change according to individual needs, gender, problem and severity of problem, culture etc. [10]. It is first on its kind of research on school going children in Pakistan which compared CBT with ABA in this regard. However, the limitation of the study is the co-operation and understanding of the participants, limited population, irregular homework and lack of interest in some cases.

Findings from the present study revealed the significance of both cognitive behavioural therapy and applied behavioural analysis as a form of treatment for reducing aggression in adolescent group however; it shows no significant evidence in distinguishing the effectiveness of either cognitive behavioural therapy over applied behaviour analysis. This suggests that current research highlights efficacy of both treatments for reducing aggression without entitling one form of therapy as more significant or effective. The results of the present study provide different opportunities for further research in this area by highlighting the comparison between two substantially different yet renowned modes of treatment procedures in field of psychology.

Copyright: ©2017 Jamil K, et al. This is an open-access article distributed under the terms of the Creative Commons Attribution License, which permits unrestricted use, distribution, and reproduction in any medium, provided the original author and source are credited.