Copyright: © 2015 kuskur CM, et al. This is an open-access article distributed under the terms of the Creative Commons Attribution License, which permits unrestricted use, distribution, and reproduction in any medium, provided the original author and source are credited.

Paracetamol, (PA) N-acetyl-p-aminophenol or acetaminophen, is one of the most commonly used drugs in the world. It is the preferred alternative analgesic and antipyretic to aspirin, particularly for patients who cannot tolerate aspirin [1,2]. Paracetamol rapidly gets absorbed and distributed after oral administration and is easily excreted in urine [3]. Generally it is highly effective for the release of pain associated with artralgia, neuralgia and headache and even to patients from gastric symptoms. In most of countries it is used as a substitute for aspirin [4]. Paracetamol is easily and completely metabolized, normally it does not show any Harmful side-effects. However, the over dosage causes the accumulation of toxic metabolites leading to kidney damage, liver disorders, skin rashes ,inflammation of the pancreas and may lead to death [1,5]. Therefore, it is very important to establish a simple, fast, sensitive and accurate detection method for paracetamol. Many methods have been described for the determination of paracetamol, such as liquid chromatography [6], liquid chromatography-tandem mass spectrometry [7], spectrophotometry [8], spectrofluorometry [9], FT-IR Raman spectrometry [10], micellar electrokinetic chromatography [11], automatic sequential injection analysis [12] and Chemiluminescence [13]. However, these methods suffer from some disadvantages, such as high costs, tedious extraction process, long analysis times and requirement for the complicated sample pretreatment, and most of these above procedures require large instruments and skilled operators, which make them unsuitable for routine analysis. Chemically modified electrodes (CMEs) have the advantages of fast response, time saving, inexpensive instrument, simple operation, high sensitivity, good selectivity and in situ determination, and they are widely used for the trace determination of various analyte. Since paracetamol is an electroactive compound which can be electrochemically oxidized (Scheme 1), CMEs can be applied for paracetamol determination, for instance, polyaniline microfilms coated platinum electrode [14] and carbon paste electrode modified with nanogold and glutamic acid [15,16] are the examples of electrode surface modification. 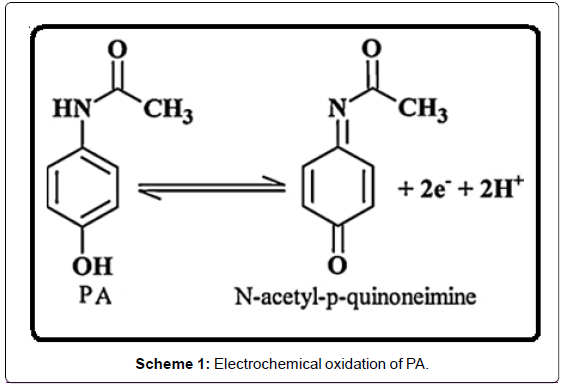 Dopamine (DA) is one of the most important catecholamine neurotransmitters in mammalian central nervous system [17-21]. The loss of DA in the human body may result in some serious diseases such as Parkinson diseases [22]. Similarly ascorbic acid (AA) has been used for the prevention and treatment of common cold, mental illness, infertility and cancer [23]. Both DA and AA are compounds that can be determined by electrochemical methods based on anodic oxidation. However, a major problem is that the oxidation potentials for AA and DA occur almost in the same potential at unmodified electrodes, which result in overlapped voltammetric responses, making their discrimination highly difficult [24]. Most of the studies on these compounds demonstrated the possibility for the separate determination of either AA [25-27] or DA [28-30] by eliminating the other using different membranes or selecting particular potentials. It was reported that stearic acid [31], Nafion [32], polypyrrole [33], and micellar [34] could selectively detect DA in the presence of AA based on the cationic permeability of the polymer. However, it is most important to develop a sensor, which can determine both AA and DA simultaneously Some efforts have been taken to fabricate modified electrodes for the simultaneous determination of DA and AA, such as poly (neutral red) modified electrode [35], poly(phenosafranine) electrode [36], poly(N,N-dimethylaniline)-modified electrode [37,38] are the examples of electrode surface modification.

Polymer modified electrodes (PMEs) have received great attention in recent years, as the polymer film have good stability, reproducibility, more active sites, homogeneity in electrochemical deposition and strong adherence to the electrode surface [39,40]. The aim of the present study is to construct a stable as well as sensitive electrochemical sensor based on Poly(Glycine) MCPE and to extend the same for the simultaneous studies of PA and to observe the interference behavior on dopamine (DA) and ascorbic acid (AA) by using cyclic voltammetric technique and the results were compared with other available reports.

Cyclic voltammetric experiments were performed on a model CH660c (CH instrument). All the electrochemical experiments were carried out in a three electrode cell system, which contained a bare carbon paste electrode (BCPE)/Poly(Glycine) film coated MCPE as the working electrode, a platinum wire and saturated calomel electrode as counter and reference electrode.

Bare carbon paste electrodes (BCPE) were made with silicon oil (30%), and graphite powder (70%). The two components were thoroughly mixed in an agate mortar for about 30 minutes. The BCPE was packed into a homemade Teflon cavity having a current collector and was polished on a weighing paper.

Figure 1a shows the growth of polymer film of 1 mM aqueous glycine solution on the surface of carbon paste electrode in 0.2 M ABS of pH 5 as supporting electrolyte. Electropolymerzation was achieved by the formation of film that grew between -0.5 V to 1.8 V at the sweep rate of 100 mVs1 for 25 cycles using cyclic voltametric technique [41]. During the process of multiple cycles the voltammogram has gradually descended with increase of cyclic time increasing. This indicates that the poly(glycine) film was formed and deposited on the surface of carbon paste electrode [42]. Figure 1b shows the 5 to 20 cycle electropolymerised electrode shows variation in current towards the 0.1 mM paracetamol and there after 25 to 35 cycles the peak current response becomes almost constant. This may be due to a complete surface coverage of the electrode with poly(Glycine) with increased scanning cycle. However, after 25 cycles, poly(glycine) covers the electrode surface completely and the active area doesn’t change significantly. Therefore the current will be higher than that of 5 to 20 cycle electropolymerised electrode. Therefore 25 cycle electropolymerised electrode was used as standard one for further studies of electrochemical processes. 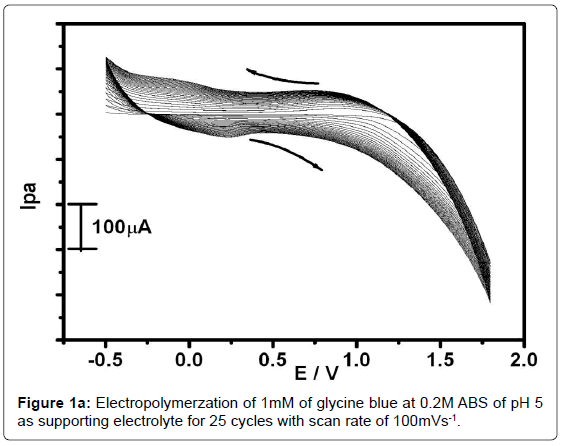 Figure 1a: Electropolymerzation of 1mM of glycine blue at 0.2M ABS of pH 5 as supporting electrolyte for 25 cycles with scan rate of 100mVs-1. 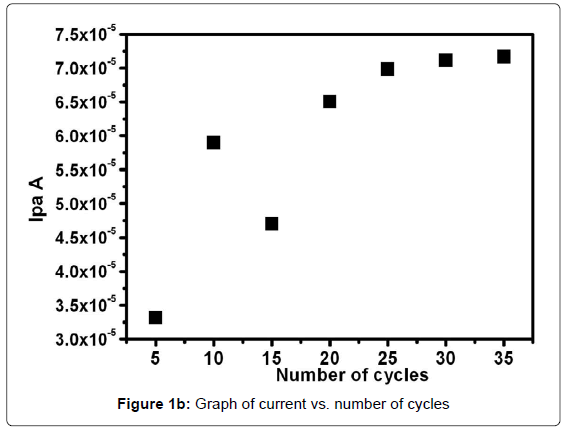 Figure 1b: Graph of current vs. number of cycles

The Figure 2 shows the cyclic voltammograms obtained for the electrochemical response of PA at Poly(Glycine) MCPE (dotted line) and BCPE (dashed line) and the absence of analyte (solid line) in 0.2 M PBS pH 7 containing 0.1 mM PA at sweep rate 100 mV/s-1. From Figure 3 the BCPE (dashed line) PA shows an irreversible behavior with an anodic peak potential of 404 mV. In poly(Glycine) MCPE shows significantly enhanced peak current and more reversible electron transfer process to PA with slight shift in redox peak potentials. A welldefined redox wave of PA was observed with anodic and cathodic peak potential at 414 mV and 313 mV respectively. It reveals that in BCPE only oxidation occurs and in MCPE both oxidation and reduction take place. In solid line shows no any other peaks due to presence of only PBS.This shows the modified CPE has fast electron kinetics and also due to large specific area and good conductivity and a large capacitive current [43]. This indicates that our modified shows electrocatalytic activity towards Paracetamol (Table 1). 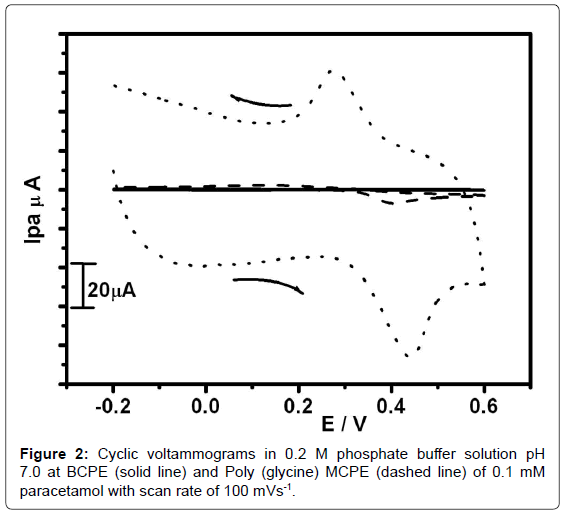 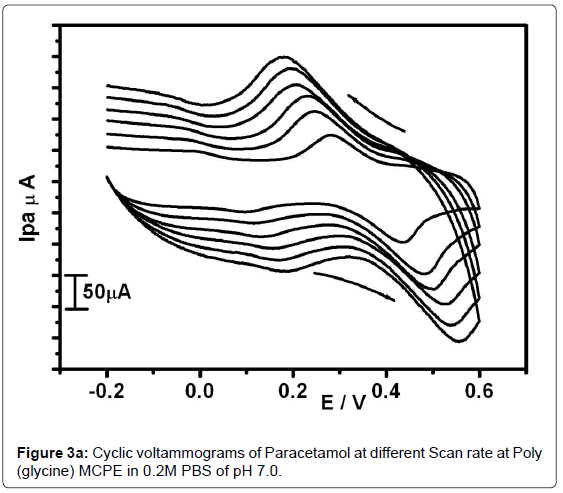 Figure 3a: Cyclic voltammograms of Paracetamol at different Scan rate at Poly (glycine) MCPE in 0.2M PBS of pH 7.0.

Table 1: Comparison of poly (glycine) MCPE with other working electrodes.

The effect of scan rate was studied by using 0.1 mM PA solution in PBS at pH -7 in an electrochemical cell. Cyclic voltammetric behavior of the PA was studied by varying the sweep rate from 50 to 300 mVs-1. As in the Figure 3a the cyclic voltammograms for poly(glycine) MCPE shows that by increasing the scan rate the Ipa and Ipc also increase and the anodic peak potential shifted towards the positive side. The graph of Ipa versus scan rate (υ) was plotted Figure 3b. The resulted graph showed excellent linearity with correlation co-efficient was found to be 0.98787.This revealed that the electrode process is diffusion controlled. 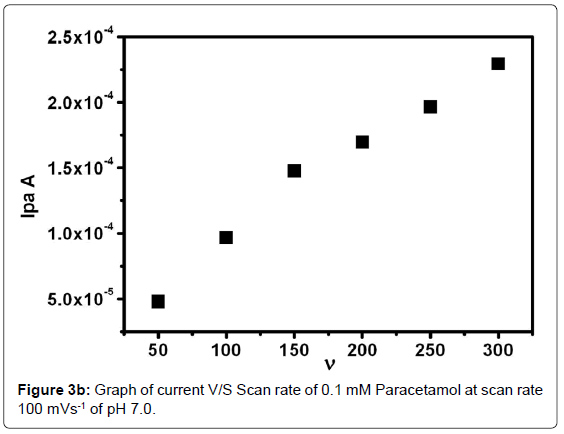 The Figure 4a shows the cyclic voltammograms at Poly(glycine) MCPE for 0.1 mM DA and PA with different concentration (0.1-0.35 mM) in 0.2 M PBS of pH -7 at sweep rate100 mVs-1. The anodic current of PA was increase with increase in concentration while the anodic current of DA remains constant due to its constant concentration. Therefore Poly(Glycine) MCPE shows good selectivity and sensitivity in the electrochemical studies of PA in the presence of DA. The plot Ipa verses concentration of PA gives correlation co-efficient value of 0.9933 as in Figure 4b. This revealed that good linearity. The detection limit of PA at poly(Glycine) MCPE was 0.14 nM. The detection limit was calculated by using the formula (1) [44] where S is the standard deviation and M is the slope obtained from the calibration plot. 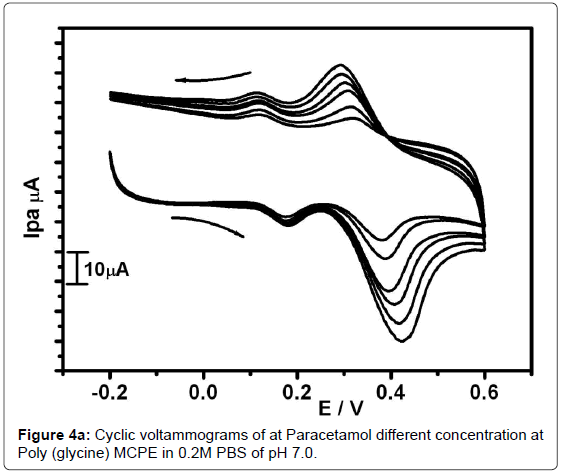 Figure 4a: Cyclic voltammograms of at Paracetamol different concentration at Poly (glycine) MCPE in 0.2M PBS of pH 7.0. 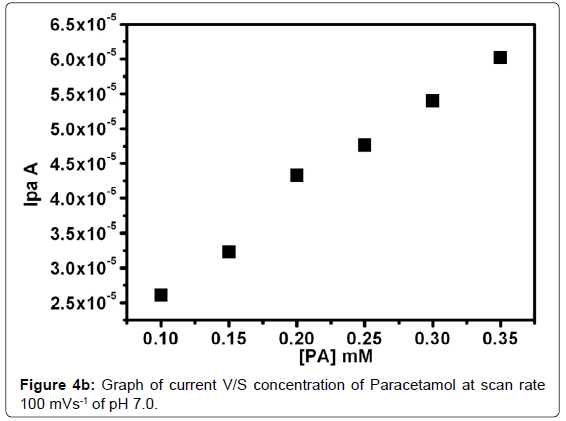 Figure 4b: Graph of current V/S concentration of Paracetamol at scan rate 100 mVs-1 of pH 7.0.

The main aim is the simultaneous determination of PA, DA and AA in a 0.2 M phosphate buffer solution of pH 7. The Figure 5 shows the cyclic voltammograms obtained for the electrochemical response of a solution containing 0.1 mM PA, 0.1 mM DA and 2 mM AA in 0.2 M phosphate buffer solution (pH 7) at the bare CPE (solid line) and the Poly(glycine) MCPE (dashed line).The solid line shows one broad peak for both analytes, indicating that the oxidation potentials of PA, DA and AA are amalgamated and indistinguishable. While three distinct anodic peaks and two cathodic peaks were obtained Poly(glycine) MCPE (dashed line). The observations clearly indicate that bare failed to separate each voltammetric signal of PA, DA and AA. The anodic peak potentials were located at 0.417 V, 0.204 V and 0.030 V respectively, with a potential difference PA-DA was 0.213 V and DA-AA was 0.174 V. Additionally, the difference between the oxidation potentials facilitated the sensitive and accurate detection of the three compounds simultaneously even for AA at a higher concentration [45]. 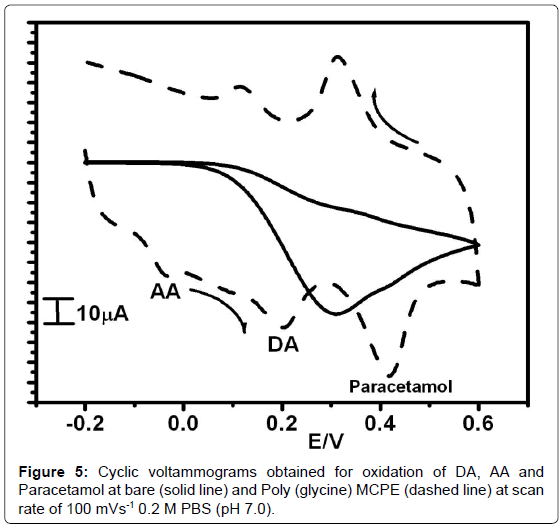 Differential pulse voltammetric technique was used for the determination of 0.1 mM PA, 0.1 mM DA and 2 mM AA at Poly(glycine) MCPE because to get higher current sensitivity and better resolution. The simultaneous study was carried out in the potential range 200 to 600 mV in Figure 6. The anodic peak potentials for PA, DA and AA were at 0.323 V, 0.116 V, and 0.013 V respectively [46-50]. 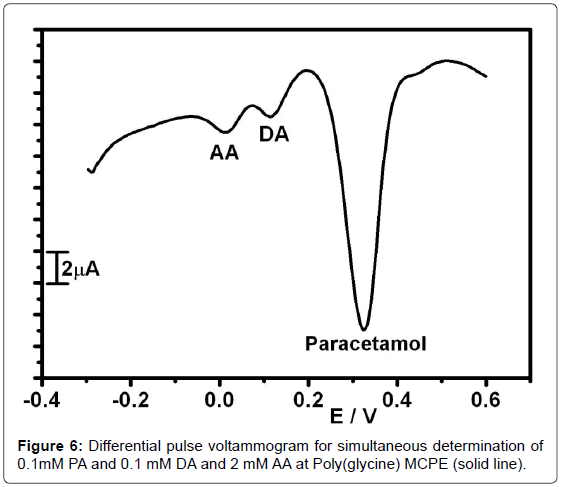 In the present work, the electropolymerisation of glycine on the carbon paste electrode produced a stable polymeric film. This study has shown that the poly(glycine) MCPE exhibits highly electrocatalytic activity towards the oxidation of paracetamol. The effect of scan rate and concentration shows. The electrode process was found to be diffusion controlled. The modified electrode displays the higher selectivity and sensitivity in voltammetric measurements of, PA DA and AA in their mixture solutions and is also evidenced by DPV technique. Therefore this method can also be applied for other drug.