Copyright: © 2015 Vishwanatha CC, et al. This is an open-access article distributed under the terms of the Creative Commons Attribution License, which permits unrestricted use, distribution, and reproduction in any medium, provided the original author and source are credited.

Lignin is a natural amorphous polymer contained in most woody plants such as trees and shrubs [1,2]. It is highly viscous liquid called black liquor as well as the main disposal of the cellulose industries. Every year tons of black liquor is rich in lignin and lignin derivatives being burned in thermal generators to generate a fraction of the energy consumed in industry [3,4]. Lignin from various pulping process has been shown to be applicable in electrochemical sensors owing to its residual quinine moieties, which are redox and thus electroactive. In order to intensify the chemical properties of lignin that makes it suitable for electrochemical applications. Various methods of combining these materials with electrical conductors (carbon nanotubes or conducting polymers) have been proposed [5-9].

Dopamine (DA) is an important neurotransmitter molecule of catecholamine’s which is widely distributed in the mammalian central nervous system [10-13], renal, hormonal and cardiovascular systems. DA is also involved in the regulation of congnitive functions. High concentration of DA is found in a particular region of brain called caudate nucleus [50 nmolg-1] and very low concentration of DA is found in extra cellular fluids (0.01-1 mM). The excess level of DA can lead of euphoria whereas depletion in DA level can lead to neurodegenerative disease such as Parkinsonism, Schizophrenia, Huntington`s diseases and senile dementia [14-19]. Consequently various electroemical techniques have been proved to be advantages in the selective and sensitive determination of DA concentration [20]. The fact that DA and other catecholamine’s are easily oxidizable compounds makes their detection possible by electrochemical method based on anodic oxidation [21].

Ascorbic Acid (AA) is a soluble vitamins present in many biological systems and in multi vitamin preparations which are commonly used to supplement inadequate dietary intake and as anti-oxidants. The concentration of AA on food stuffs, beverages and pharmaceutical can be an index of quality since it varies during production and storage stages [22-24], Similarly AA has been used for the prevention and treatment of the common cold, mental illness, infertility and even cancer [25,26]. Now-a-days AA has been more interested in medical, veterinary science, toxicology, diagnosis of certain metabolic disorder and in the determination of nutrition value of foods [27-31].

Uric Acid (UA) is the primary end product of purine [32] metabolism. Through the liver which is present in the blood of urine monitoring UA in the blood or urine is important because it can be used as a powerful indicator for an easily warning sign of kidney diseases. Abnormal UA level in a human body could be caused by several diseases such as Gout hyperuricemia, Lesch-Nyan syndrome, Cardiovascular and chronic renal diseases. There are some electrochemical methods for determine of uric acid [33-37].

In continuation of our work on the modification of carbon paste electrodes we intended for the lignin was modified and applied for the electrochemical investigation for dopamine, ascorbic acid, and uric acid individually. Lignin MCPE shows high sensitivity in anodic and cathodic peak current towards dopamine and ascorbic acid not for the uric acid at pH 7.2 PBS solutions.

Cyclic voltammetry (CV) was performed in a model CHI-660c (CH Instrument-660 electrochemical workstation). All experiments were carried out in a conventional electrochemical cell. The electrode system contained a carbon paste working electrode (3.0 mm in diameter), a platinum wire as counter electrode and saturated calomel as reference electrode.

Effect of lignin as modifier

Lignin is used as a modifier in the preparation of carbon paste electrode and it was investigated by cyclic voltammetric technique. The different weight of lignin 2-8 mg was added to the graphite powder along with the silicon oil which acts as a binding agent when the concentration of lignin the anodic and cathodic peak current gradually increases. This is due to lignin molecules contain quinine/ hydroquinone (Q/HQ) groups and its shows antioxidant properties beyond catalytic properties therefore lignin can be used for MCPE and for sensors properties [3,5,6,38-41]. The graph of peak current v/s different concentration of lignin modified carbon paste electrode was plotted as shown in Figure 1. The maximum anodic peak current signal was obtained for 8 mg lignin MCPE. The 4 mg lignin was chosen for the work. 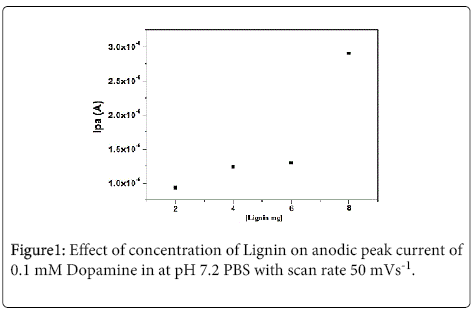 Figure 1: Effect of concentration of Lignin on anodic peak current of 0.1 mM Dopamine in at pH 7.2 PBS with scan rate 50 mVs-1.

The Figure 2 shows Electrochemical response of 1 mM K4Fe(CN)6 bare (dashed line) and Lignin MCPE (solid line) with supporting electrolyte 1 M KCl at scan rate 100 mVs-1. The bare CPE shows well defined oxidation and reduction peak was found to be 0.26 V and 0.17 V with the maximum peak potential difference (ΔEp) 94 mV. After modification with lignin the oxidation and reduction peak potential found to be 0.41 V and 0.04 V with small peak potential difference (ΔEp) 34 mV and the peak currents decreased rapidly when compared to BCPE. This is due to the anionic character of the oxidized lignin layer leading to the repulsive interaction of the electrode surface and the reduction species [5] which inhibit the electroctalytic effect towards potassium ferricyanide. 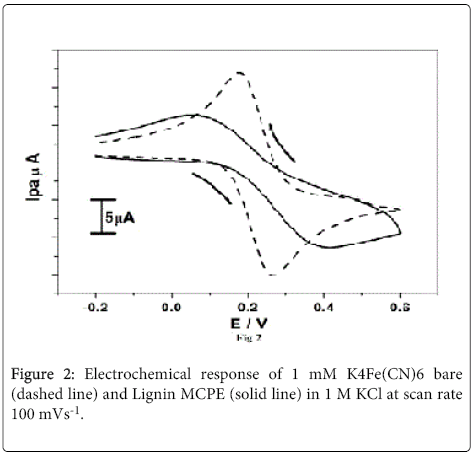 The Figure 3 displays the cyclic voltammograms of bare CPE (dashed line) and lignin MCPE (solid line) in 0.1×10-4 M DA solution at pH 7.2 PBS with scan rate 50 mVs-1. The bare carbon paste electrode shows anodic and cathodic peak potential and currents. After the modification with lignin the current signals were enhanced with decrease in over potential. This modified electrode shows electrocatalytic properties and the sensor properties. 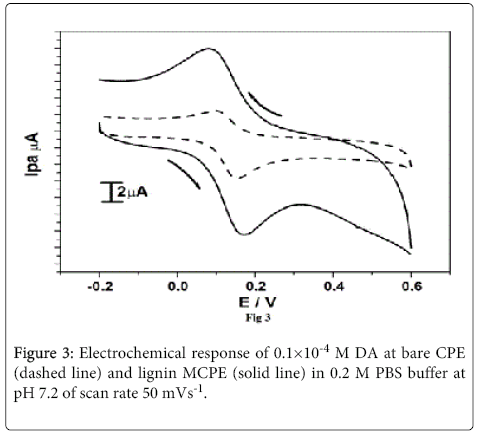 The effect of concentration of DA in the range (0.1-0.8×10-4 M) was studied at lignin MCPE in 0.2 M PBS buffer at pH 7.2 of scan rate 50 mVs-1 From the Figure 4a it is clear that with increase in the concentration of DA the Ipa and Ipc also increases with shifting of Epa towards positive potential and Epc towards negative potential. The plot of Ipa v/s DA concentration Figure 4b shows increase in electrochemical peak current with linear regression equation Ipa(μA)=4.819 (C) μM/L+0.8391(μA) (R2=0.98634). The detection limit for dopamine was found to be 1.4×10-5 M. The detection limit was calculated by using the formula (1) [42] where S is the standard deviation and M is the slope obtained from the calibration plots. 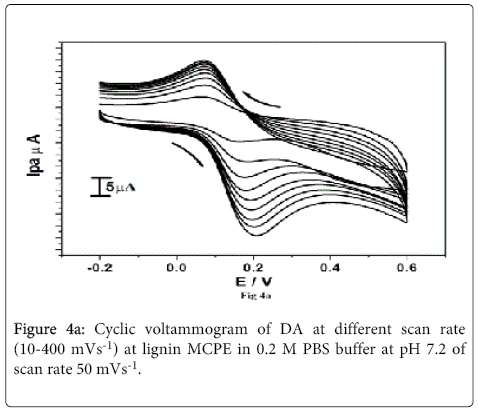 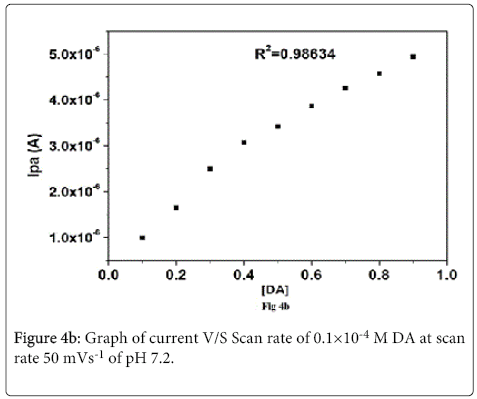 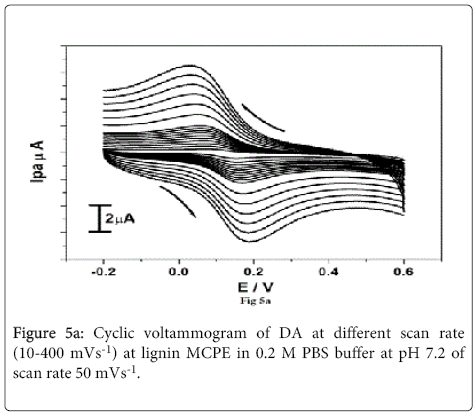 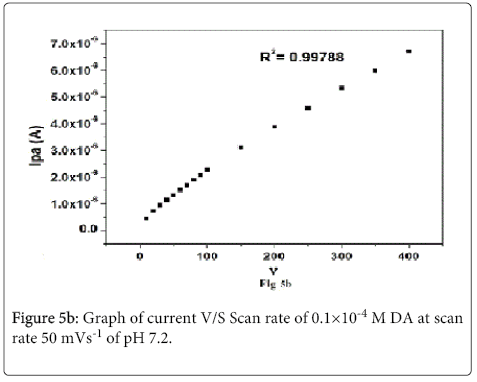 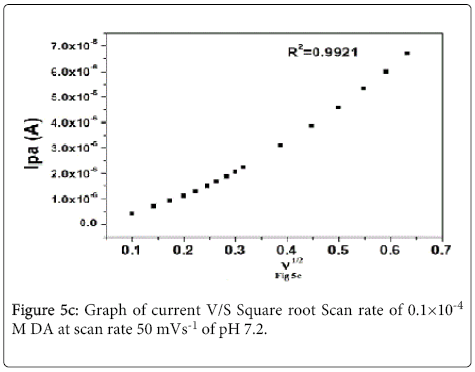 The Figure 6 shows the cyclic voltammograms of 1×10-4 M AA on the bare CPE (dashed line) and lignin MCPE (solid line) at pH 7.2 PBS solutions with scan rate 50 mVs-1. At bare CPE AA shows well oxidation peak current at 0.31 V with a reduced voltammetric wave. However in lignin MCPE shows for some extent of enhancement in oxidation peak current and the Epa was found to be 0.36 V by shifting the oxidation potential towards positive side when compared to bare CPE. This results show that our modified carbon paste electrode act as a sensor for AA. The Figure 7 shows the cyclic voltammograms of 0.5×10-4 M UA on the bare CPE (dashed line) and lignin MCPE (solid line) at pH 7.2 PBS solution with scan rate 50 mVs-1. The oxidation peak potential (Epa) of UA at bare CPE and lignin MCPE was found to be 0.28 V and 0.43 V respectively. After the modification electrode shows decrease in current signal when compared to bare CPE. This indicates that the modified electrode shows lower electrocatalytic activity for UA. 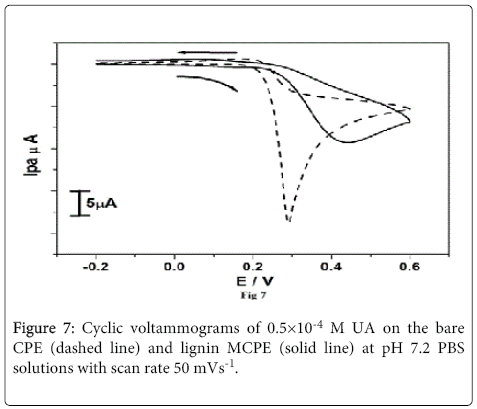 In this study the modified electrode was prepared by adding different quantity of lignin to proportion of 70:30 of graphite powder and silicon oil and was applied for the electrochemical studies for AA, DA, and UA. The Lignin MCPE shows electrochemical sensors for DA and AA. This lignin MCPE is not sensitive towards the diction of UA and this MCPE shows sensors application for DA and AA individually as well as simultaneous. This method can be also been applied for other neurotransmitters.