In order to use biomass as an energy source, the challenge is that the original form of biomass material cost too much for handling and transporting. Densification is needed for cost effective handling, transportation, and storing. This study focuses on investigating the mechanical properties of energy crops during bulk densification. Switchgrass, corn stover, and Miscanthus samples were collected from fields and used in this study. The effects of chamber size, particle size/cut length, arrangement/orientation method, and harvesting time on specific energy of compressing bulk biomass crops were studied. Results indicated that larger compression chamber had significant lower specific energy consumption over the same volume reduction level. The particle length and particle orientation were also considered in this study. Results demonstrated that the parallel arrangement needed less compression energy; and the biomass with shorter particle sizes had higher energy consumption than those longer ones. Energy consumptions of the biomass harvested in different seasons were not significantly different for Switchgrass but found to be significant for corn stover.

The cost associated with the handling and transporting of the biomass is a major concern in order to use biomass as an energy source. To reduce costs, loose biomass crops need to be densified by briquetting, pelletizing, or cubing [1]. Densification increases the bulk density of biomass from a density of 40-200 kg/m3 to a density of 600-800 kg/m3 [2-6]. Due to uniform sizes and shapes of densified biomass, the material can be easily handled with standard machines or equipment which makes the process more efficient [3,7].

For the purpose of withstanding various forces and impact during handling and transportation processes, density and durability as dependent quality index with independent variables such as, moisture content, need to be determined [8]. In order to compress the biomass efficiently, the characteristics of biomass should be understood more deeply and completely [9].

The energy consumption of densifying biomass materials, which is a very important issue of energy crop production, has not been studied sufficiently so far. A thorough study on the mechanical properties of energy crop densification should be conducted to seek for ways to reduce the investment cost and energy consumption during densification production.

The present work aims to investigate the mechanical properties of energy crops during bulk densification. Specific objectives of this research were to:

Determine the relationships between the specific energy of compressing bulk biomass crops with consideration of the effect of compression chamber size,

Quantify the influence of particle size and arrangement methods of particles on the energy consumption during the densification process,

Characterize the differences between compressing different types of biomass crops.

Switchgrass, corn stover, and miscanthus samples were used and collected from farms in central Pennsylvania area. The fall switchgrass samples were manually cut at 10.2-15.2 cm from the ground surface between November and December 2013 and kept in refrigerated storage room. Switchgrass was left standing over the winter in the field, and then samples were collected in March, 2014 with the same method.

Corn was combined in October 2013 and the stover was left in field and samples were then collected by hand between November and December 2013 and stored in the same cold room as the switchgrass. The spring corn stover samples were collected in March 2014 from the same field.

Miscanthus samples were only collected in the spring. Miscanthus crops were standing in the field over the winter, and were cut in March 2014. Crop samples were also stored in the same cold storage room.

To evaluate the effect of chamber size on specific energy consumption, five compression chambers with different sizes were made as shown in Figure 1. The bottom area of those chambers were 1/2, 3/8, 1/4, 3/16 and 1/8 of the compression chamber of a small square baler (14 by 18 in, or 1625.8 cm2). The height of a chamber was proportional to the bottom area. Chambers were built with carbon steel plate to ensure the strength. Each chamber had its matched compression platen, and the chamber body was welded. Five cross sections of these chambers were (L×W×H, cm) as shown in Figure 1. The arrangements of crop samples in a compression chamber included two methods, parallel and random (Figure 2). Parallel arrangement means that all the crop stems were set horizontal nearly in the same direction and parallel to one of the sidewalls of the chamber (Figure 2a). Real parallel arrangement was hard to achieve due to leafs and nodes etc. on the stem. While filling the chamber, attempts were made to minimize mass scatter loss and stem-leave destructive disturbance. These were other reasons that non-parallel particles existed in the chamber. In random arrangement, crop samples were randomly placed inside the chamber as shown in Figure 2b. The term “random” used here is quasi-random due to (1) the limited space inside a chamber; (2) attempt to distribute all sample pieces uniformly; and (3) minimize mass scatter loss and leave-stem proportional and structural changes. Figure 2: Arrangements/orientation of the samples.

All crop samples were weighed before filling them into the compression chamber to maintain the same initial bulk density. For both arrangements, samples were placed into the chamber gently and no vertical load was applied during sample placement process. When the chamber was full and had more sample to be filled in, a preloading process was applied. Basically, the pre-loading was a gentle compression and vertical compression force and displacement applied were recorded.

The universal testing machine (Cooper Instruments and Systems) located in Agricultural and Biological Engineering building was used in this study (Figure 3). The loading capacity of this machine was 89,000 N (20,000 lb) which was limited by the maximum pressure of its hydraulic cylinders. Two identical hydraulic cylinders were in opposite direction to apply vertical loading force. The upper cylinder extends downward and the lower cylinder extends upward. Each cylinder could be controlled separately. The stroke of each cylinder was 25.4 cm (10 in). The hydraulic system didn’t have a speed control valve. Hence, the hydraulic cylinders had a constant speed of 1.946 cm/s (0.766 in/s) for all compression tests. The speed is not adjustable due to the design of the machine. The universal testing machine could be operated manually in preloading stage. While in compression tests, it was operated automatically and the loading process stopped when the platen reached to the set maximum vertical displacement.

As shown in Table 1, chamber size, particle size, the harvesting season/date, were considered as factors that may affect energy consumption. Crop types included Switchgrass, Corn stover, and Mithcanthus. The all experiments were distributed into groups due to their different particle sizes and arrangement methods:

The calculation of energy consumption included both the preloading and loading processes. ANOVA was used to test the significant differences, and establish desired regression relationships between density and volume reduction.

All switchgrass compression tests started from an approximately the same density of 40 kg/m3. Loading or compressing process was stopped at 88% volume reduction. The specific energy consumptions were calculated.

Note: Means with the same letter are not significantly different from each other (Tukey HSDa test), and the mean difference is significant at the 0.05 level.

October and December harvested corn stovers were used in this study. All tests were distributed into two groups: parallel-long and random-5.1 cm. The initial densities of all groups were around 40 kg/m3. 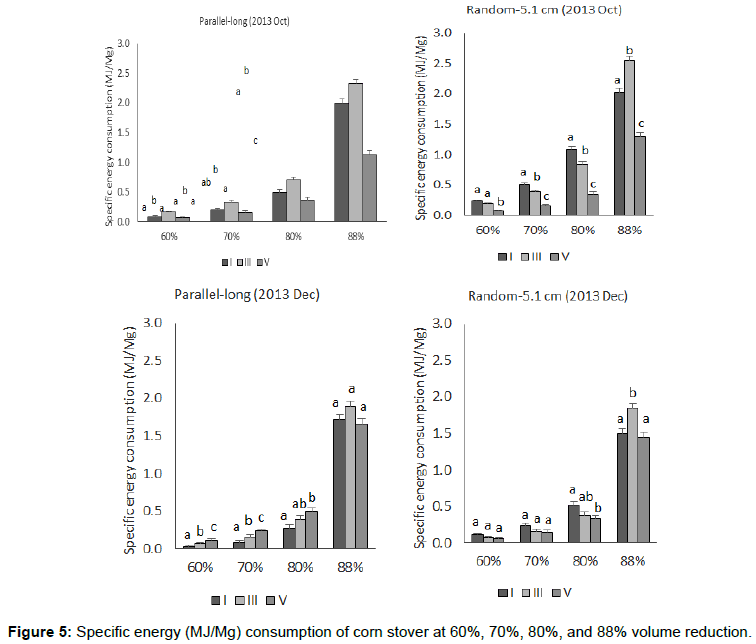 In sum, the harvested time could impact the effect of chamber size on energy consumption. Additional two months under snow condition made the stovers, leaves, and rods softer, which could save energy consumption in compression.

In the experiments of miscanthus, chamber size, particle size, and arrangement method were the factors to be tested. Due to the hardness of miscanthus and the capacity of the compressor, the limitation of volume reduction was set at 80%. The results of energy consumption are shown as following in Figure 6. 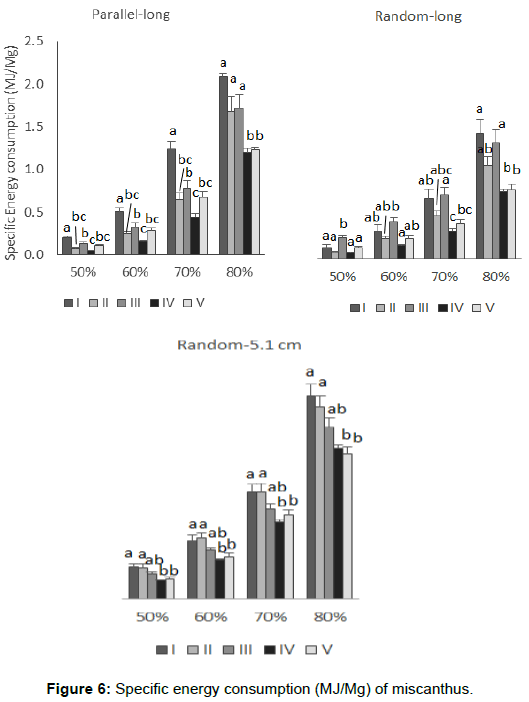 The all 15 treatments were divided into 3 groups due to their different particle sizes and arrangement methods: parallel-long, random-long, and random-5.1 cm. The initial densities of randomlong and random-5.1 cm were around 40 kg/m3. However, the initial density of parallel-long arrangement of mischantus was about 80 kg/m3 because of the smaller gap between the particles.

The parallelly arranged crops could reduce the compression energy for corn stover and mischantus. Making stems in the same direction while baling the grass could be a good choice, but not easy to achieve in practice. For corn stover particle size had less influence on compression energy compared to switchgrass and Miscanthus due to its relatively complicated composition and initial low bulk density. In most cases, the chopped biomass with shorter particle sizes had higher specific energy consumption than longer particle sizes, but not significant.

Copyright: ©2017 Wang T, et al. This is an open-access article distributed under the terms of the Creative Commons Attribution License, which permits unrestricted use, distribution, and reproduction in any medium, provided the original author and source are credited.