To date, research on possible applications of asphalt solar collector technology (ASC) has been focused on their usage of in cold to moderate climate conditions, mostly for road de-icing and heat pumps. Both of these applications require large and expensive intercessional heat storage units. This paper will explore potential applications of ASC in hot and humid climates by evaluating the performance of a simulated 20 m²ASC meeting the demand of three low to medium-temperature solar thermal applications, namely: solar assisted cooling, atmospheric water generation and domestic hot water.

Asphalt solar collectors (ASC) involve the use of asphalt-paved surfaces to harvest solar energy. ASC is a relatively new technology that has become a research focus in the past few years due to the thermal properties of asphalt and the abundance of asphalt infrastructure in modern cities, as 35–60% of modern cities are already paved with asphalt [1] and resurfaced, on average, every 12–20 years [2]. Thus, ASC can be relatively easily integrated in the current infrastructure without a negative impact on the structural performance of paved roads [3,4].

An ASC system consists of a pipe embedded in the wearing course of asphalt pavement, which acts as a heat exchanger (Figure 1). ASC systems function by pumping fluid through the embedded pipe. The fluid temperature rises as it collects the heat from the asphalt pavement. The heated fluid is then collected in storage tanks for further use.

The presented research is conducted with the help of the numerical simulation software TRNSYS. The typical meteorological year (TYR) weather data of the city of Jeddah, Saudi Arabia was chosen for this research as its climactic conditions reflect those of a typical hot and humid climate, characterized by hot to extremely hot summers and mild to warm winters. Rain is scarce with minimal cloud cover. TYR weather data show that temperature and solar radiation intensity reach their maximums during the summer months between May and September with minimum cloud cover and almost no rain.

This research was conducted during this period of the year as it is during this time that ASC performance is expected to reach its peak. In Table 1, a summary of the simulation boundary conditions is provided.

To ensure the reliability of the simulated model, the asphalt pavement is modelled in TRNSYS using the same thermal and physical properties of a real sample from the case study site (Table 2) [5].

Table 2: Asphalt properties as found in Alawi [5] study and used to build the ASC model in TRNSYS. 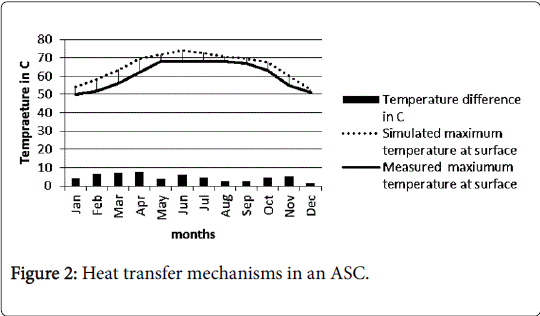 The compression results showed a general agreement in thermal behaviour between the simulated and real samples [5] as well as with the Saudi Arabia asphalt grade recommendation map [6], with results indicating that the sample can safely be considered valid for the purposes of this research. The difference in temperature between the simulated and measured surfaces was an average of 5K. This difference can be attributed to a number of factors, such as the fact that the simulations are based on TYR weather data and not on real time weather data.

An optimized configuration of the ASC components was developed. ASC system components along with the asphalt thermal properties are chosen based on information in previously published articles on the topic [7-9] with the addition of the road rated insulation Styrodur®C 4000 CS, with of conductivity (λ)=0.032 W/m*K [10]. A sensitivity analysis was performed on the asphalt pavement and heat exchangers in order to develop an optimized ASC model to yield the largest amount of useful energy for low to medium temperature solar thermal applications. ASC optimization is achieved by assessing the impact of each ASC system component on the performance of the ASC as per the following criteria

1. The amount of fluid collected at temperatures between 45°C and 55°C at 2.5K intervals along the simulation time frame

2. The maximum temperature reached by the fluid at the outlet.

3. The maximum temperature difference between the inlet and outlet.

A summary of the investigated variables of the ASC is displayed in (Tables 3 and 4).

Supporting components such as the storage tank, power source and a pump were added to the ASC system in order to achieve full functionality. These supporting systems were chosen from commercially available devices to allow for further validation of the simulation results on a field test as well as for assessing the overall performance of complete ASC system under real life conditions.

A vertical insulated hot water tank was used in the simulation. The tank height was 2 m and its capacity was 3 m3. Its heat loss coefficient value was 0.1 (W/m2×K).

A direct current (DC) water pump with a rated capacity of 1000 kg/h was used. The main advantages of the DC pump are its high efficiency and the fact that the pump can be directly wired to a PV panel without the need of an additional DC/AC converter, as the ASC system is expected to work in phase with sun radiation intensity, rendering the use of a backup battery unnecessary (Tables 5-7).

Table 5: Specifications of the water pump [11].

A 12v 30WP photovoltaic panel was chosen as the power source for the pump. The PV panel was installed facing the horizontal radiation, as this angle is the optimum angle for PV panels during the summer months in Jeddah (12:48) and the working hours of the pump [12] .

The performance of the developed ASC is to be evaluated based on assessing the ASC’s ability to meet the load demand of three solar thermal applications, which are:

2. An atmospheric water generator (AWG) with a water extraction efficiency of 35% [14]

3. A domestic hot water demand (DHW) of 600 L/day which represents the daily consumption of about 10 persons [15].

Table 7: Specifications of the water pump [11].

The AC load hours are chosen between 9am and 6pm as they match the typical cooling demand load profile, where the AWG load hours are chosen between 2am and 8am. During this time, the relative humidity is at its highest, thus allowing the system to extract the largest possible amount of water from the air. ASC system performance meeting each load is evaluated based on the following criteria

2. The amount of water collected above the minimum driving temperature

An air-to-water heat exchanger was used to mimic the effects of the load of each of the three applications on the return water temperature to the storage tank. This type of heat exchanger was used due to it being a stable system that can be easily specified and controlled, and can thus be easily integrated into further field tests performed under real conditions. Heat exchanger performance was calculated separately for each of the scenarios using the Number of Transfer Units Effectiveness Method (NTU) [16].

The NTU value was used in order to regulate the amount of heat extracted from the water by the heat exchanger in order to deliver the return water from the heat exchanger to the tank at the correct temperature as if the water was subjected to real load. The temperature of the return water in the AWG and AC applications is taken from [14,18] respectively. A schematic of the developed ASC system is provided (Figure 3). 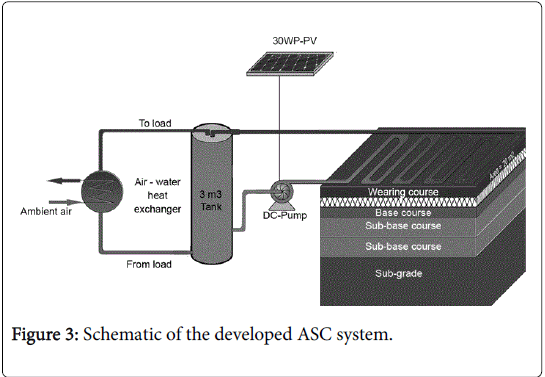 Development of the Optimized ASC Configuration

The sensitivity analysis revealed that the heat insulation and asphalt heat capacity had the most positive impacts on temperature difference between the fluid inlet and outlet temperatures.

On the other hand, increasing the system depth had the most negative impact, followed by increasing the pipe spacing. Asphalt conductivity and solar absorption showed very little correlation with system performance.

Increasing heat insulation thickness made a slight impact on system performance. Properties of the ASC optimized system are specified in (Tables 8 and 9).

The results of investigating ASC performance under the three loads are promising (Tables 10-12).

In general, the system showed potential for atmospheric water generation and meeting the domestic hot water load, with the former being of high importance, especially in hot humid climate conditions. In the month of August, working under the load of DHW, The 20 m2 ASC system extracted 1516 litres of water from the air and reached an average efficiency of almost 25%.

Table 10: Performance of the optimized ASC meeting the load of the 2kW Absorption solar cooling (AC).

Table 11: Performance of the optimized ASC meeting the load of an atmospheric water generator (AWG) with a water extraction efficiency of 35%.

This paper has investigated the performance of ASC in hot humid climates by means of simulation with TRNSYS [16]. The performance of the simulated asphalt pavement model is provisionally validated against empirical data from the case study city in order to ensure the reliability of the created TRNSYS model.

The optimized asphalt solar collector along with its necessary supporting components was developed based on a sensitivity analysis and the availability of commercial devices in order to facilitate the building of a real system based on the given specifications for further field tests to validate the research results. The results of the sensitivity analysis indicate that the addition of a road-rated heat insulation layer below the pipe-carrying asphalt layer has improved ASC performance. The results of the sensitivity analysis indicate that, in general, the heat components of the ASC (pipes and fluid) have a greater influence on the performance of the ASC system than the asphalt properties do. The main ASC design components that were found to impact the performance of the ASC, with respect to achieving the highest temperature difference between the fluid inlet and outlet were the fluid flow rate, the fluid heat capacity and the depth of the heat exchanger system, in that order.

The performance of the developed system was analyzed and evaluated under the load of an absorption cooling cycle, an atmospheric water generator and typical domestic hot water demand between the months of May and September. ASC performance for the above mentioned solar thermal applications indicate a strong potential for the use of the ASC technology to cover domestic hot water demand as well as for atmospheric water generation, with the latter being of especially high importance in hot and humid climates where there is an abundance of asphalt paved roads. It should be noted that designing a specified load for each of the previously-mentioned cases was beyond the scope of this research. Therefore, the results of this research should be considered accordingly.

The results of this paper are relevant to understanding the potential applications of ASC technology in hot, arid climates. It has been demonstrated that ASC is a viable technology for arid, urban environments. The results of this study indicate a need for further field tests in different weather conditions in order to accurately assess the applicability of ASC systems to meet such demands as well as to validate the results of this research.

Preliminary cost estimates from local contractors for the proposed additions to the normal paving for the ASC system represent an extra 25$ per m2. A cost-benefit analysis and the potential applicability of combining ASC with other solar energy harvesting systems were not part of this research. An analysis of the impact of the system on the safety and durability of paved roads should be included in future field test research.

Overall, the results of this research imply a wide array of potential applications for ASC technology, demonstrate the validity of the new technology, and indicate a need for further field test research.

Copyright: ©2016 Khoja AO, et al. This is an open-access article distributed under the terms of the Creative Commons Attribution License, which permits unrestricted use, distribution, and reproduction in any medium, provided the original author and source are credited.