Fear, Guilt and Shame in the Pre-Senior Offspring of Individuals Suffering from MidStage Dementia and Beyond

Copyright: © 2016 Pahl N. This is an open-access article distributed under the terms of the Creative Commons Attribution License, which permits unrestricted use, distribution, and reproduction in any medium, provided the original author and source are credited.

Objectives: With this study, we looked to resolve three primary questions: 1. Do the offspring of individuals suffering from dementia feel guilty about their parent’s circumstances and the steps that offspring have taken in order to deal with the parent’s caregiving needs? 2. Does the offspring fear that they, too, will inevitably develop the disease? 3. Do they, the offspring, feel shame in regards to this genetic tendency? Methods: Fifty-three participants took part in an online Likert-scale survey that asked each to gauge the intensity of their fear of developing dementia themselves, their guilt in deciding their parent needed formal full-time caregiving aid, and the shame associated with their genetic tendency toward the disease. The questionnaire scored each answer on a scale of 1-5, with 1 being “not at all” and 5 being the most intense fear, guilt and/or shame. Results: Per fear, participants averaged a 3.30 score. Sixty-nine percent of those individuals replied “occasionally” or greater. In addition, the DLB subgroup averaged a score of 4.36. Per guilt, participants tallied an average score of 3.60. Seventy-four percent answered “occasionally” or greater. Also, the EOD offspring group recorded an average score of 4.19. Per shame, 15% of the overall group answered “occasionally” or higher, with the overall group averaging a score of 1.72. Conclusion: Our findings suggest that a majority of people with a parent suffering from mid-stage dementia and beyond are quite fearful they, too, will develop the disease. These individuals also feel significant guilt in regards to their parent’s disease and the caregiving decisions they, the offspring, have made in regards to that parent. And while the shame associated with genetic tendencies is not as intense as the fear or guilt, this study finds that stigma surrounding dementia does still exist.

Dementia’s a general term used to describe a decline in mental faculties that interferes with everyday life? not a specific disease, it instead consists of a wide range of symptoms associated with cognitive decline [1]. Examples of dementia subcategories include Alzheimer’s disease, Parkinson’s disease and Huntington’s disease [2]. The term early onset dementia, otherwise known as OED, refers to dementia that first occurs in persons before the age of 65? the dementia may be caused by Alzheimer’s disease or another related condition, and may appear in any stage: early, mid or late [3]. Dementia with Lewy bodies, also known as DLB, is a progressive neurodegenerative dementia that leads to a decline in thinking, reasoning and independent function [4]. The disorder affects some 1.4 million Americans [5]. Its symptoms can include, among other things: pronounced variations in attention and alertness? recurrent, detailed visual and auditory hallucinations? spontaneous features of parkinsonism? REM sleep behavior disorder (RBD)? and transient, unexplained loss of consciousness [6].

At present, more than 5.4 million Americans are living with some form of dementia, approximately 200,000 of them suffering from EOD, and one in nine Americans aged 65 or older has the disease? in fact, so widespread is the disorder that it now kills more Americans than prostate cancer and breast cancer combined, with one in three senior individuals dying from dementia [7]. A 2013 study even shows that those figures may be understated, as it finds a larger number of U.S. deaths are attributable to dementia than reported on death certificates [8].

A review of mortality rates for the United States and United Kingdom finds that over the past quarter century, deaths related to dementia have increased by 589%, while deaths from cancer have risen 14%, and deaths from heart disease have actually decreased by 34% (Table 1).

Furthermore, current research suggests dementia caregivers often suffer from anxiety, depression and physical ills [9-11]. Research also indicates that those providing informal care for persons stricken with dementia related disorders many times, offspring are also prone toward mental anguish, depression and even suicidal ideations [12-14]. Furthermore, current research suggests that heredity plays a significant role in the development of Alzheimer’s disease and other dementia disorders [15,16]. And finally, dementia, to a large degree, remains stigmatized in most cultures [17-22].

In this study, we look to resolve three primary questions: 1. Do the offspring of individuals suffering from dementia feel guilty about their parent’s circumstances and the steps that offspring have taken in order to deal with the parent’s caregiving needs? 2. Does the offspring fear that they, too, will inevitably develop the disease? 3. Do they, the offspring, feel shame in regards to this genetic tendency?

Each dementia case was diagnosed by a trained physician (MD), either a neurologist or another cognitive specialist, such as a geriatric psychiatrist. Evaluation tools included the Mini State Mental Examination (MMSE), the General Practitioner Assessment of Cognition (GPCOG), and the Short Informant Questionnaire on Cognitive Decline in the Elderly (IQCODE), as well as positron emission tomography (PET) scans and functional magnetic resonance imaging (fMRI).

Participants reported the use by their parents of various medications for issues related to their disease, such as the dementiaspecific pharmaceuticals Aricept (donepezil) and Exelon (rivastigmine). One participant reported that her mother was taking the NMDA receptorblocking drug Namenda (memantine). Other drugs associated with dementia symptoms were also being used by participants’ parents, including Ativan (lorazepam) for anxiety, Effexor (venlafaxine) and Cymbalta (duloxetine) for depression, Seroquel (quetiapine) for confusion, and Risperdal (risperidone) for hallucinations.

Those that had abstained from medication (seven) did so for various reasons (allergies, seizure history, fear of side-effects), in spite of pharmaceutical compounds and in favor of either a “holistic approach” such as herb and supplement intake or non-ingested approaches, like cognitive behavioral therapy (CBT), art therapy, and even aromatherapy. In all cases, the holistic approach was employed by individuals with inhome care.

Individuals with at least one parent suffering from midstage dementia or beyond, and with that parent living under fulltime caregiver supervision, were recruited. No other parameters applied.

Of the 53 dementia cases studied, 42 were Alzheimer’s disease diagnoses, while 11 were DLB diagnoses. Twentyone of the 53 were of the EOD variety. All cases were midstage or beyond at the time of the study. Fortyone of the cases involved the parent living in a memory care facility? in the other twelve cases, the parent lived under inhome supervision.

Participants took part in an online Likertscale survey that asked them explicitly: how often do you fear that you will inevitably develop dementia? how often do you feel guilty about your parent’s dementia and the caregiving steps you’ve taken? and how often do you feel shame in regards to your genetic tendency toward dementia? The questionnaire scored each answer on a scale of 15, with 1 being “never” and 5 being the most intense fear, guilt, and/or shame. 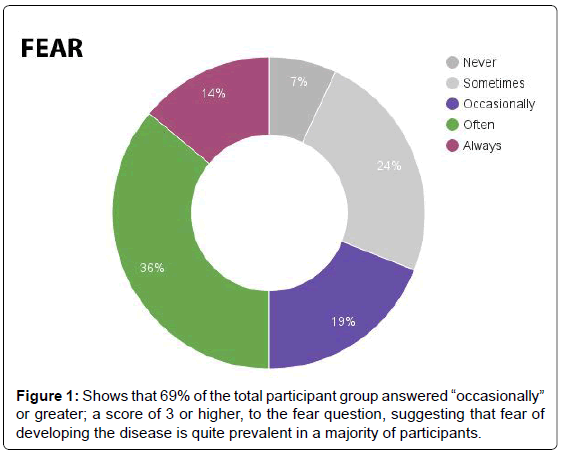 Figure 1: Shows that 69% of the total participant group answered “occasionally” or greater; a score of 3 or higher, to the fear question, suggesting that fear of developing the disease is quite prevalent in a majority of participants. 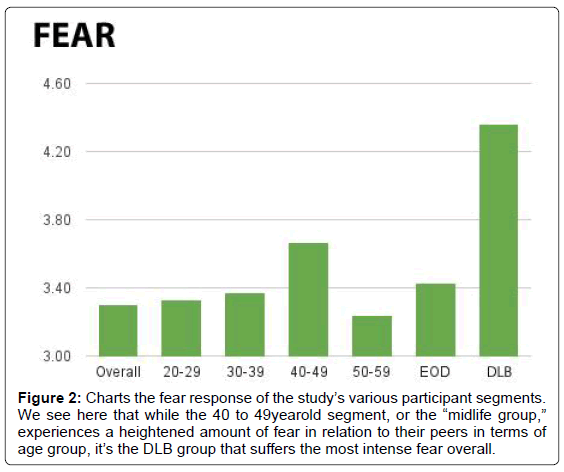 Figure 2: Charts the fear response of the study’s various participant segments. We see here that while the 40 to 49yearold segment, or the “midlife group,”experiences a heightened amount of fear in relation to their peers in terms of age group, it’s the DLB group that suffers the most intense fear overall. 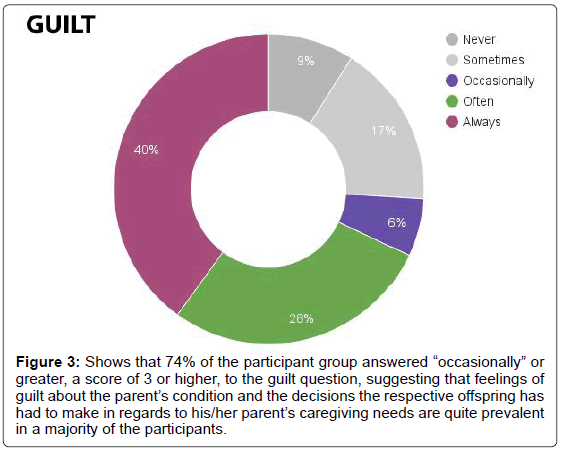 Figure 3: Shows that 74% of the participant group answered “occasionally” or greater, a score of 3 or higher, to the guilt question, suggesting that feelings of guilt about the parent’s condition and the decisions the respective offspring has had to make in regards to his/her parent’s caregiving needs are quite prevalent in a majority of the participants. 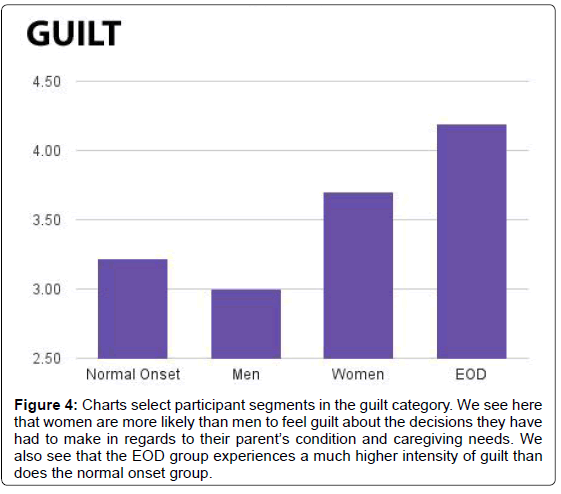 Figure 4: Charts select participant segments in the guilt category. We see here that women are more likely than men to feel guilt about the decisions they have had to make in regards to their parent’s condition and caregiving needs. We also see that the EOD group experiences a much higher intensity of guilt than does the normal onset group. 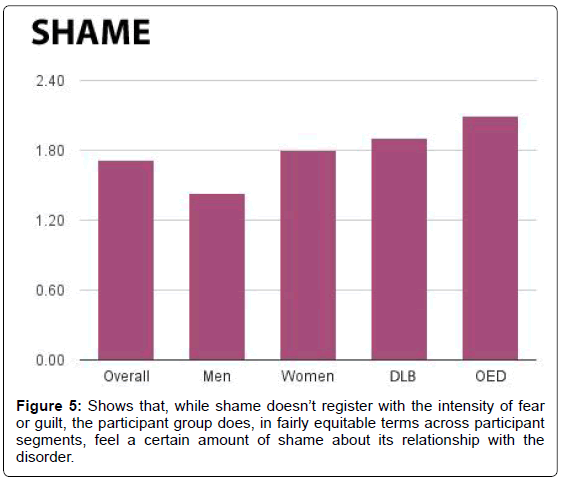 Figure 5: Shows that, while shame doesn’t register with the intensity of fear or guilt, the participant group does, in fairly equitable terms across participant segments, feel a certain amount of shame about its relationship with the disorder. 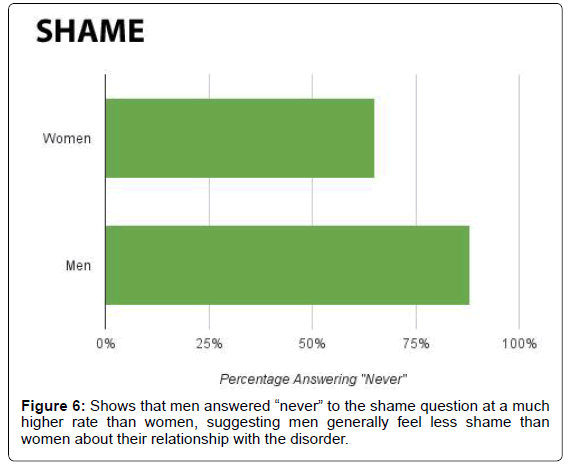 Figure 6: Shows that men answered “never” to the shame question at a much higher rate than women, suggesting men generally feel less shame than women about their relationship with the disorder.

When surveying the topic of dementia, we find research pays considerable attention to the psychological makeup and needs of professional caregivers, both in-home and in-facility. However, current research rarely considers the emotional and/or psychological state of the dementia sufferer’s offspring. We’ve done so with this research.

And while our study is, in regards to the overall size of the dementia community, a relatively small data sample, we believe it’s both a relevant and necessary first step? with a cross-section of age, gender, and nationality, the present study serves as an excellent jumping off point for further research as it pertains to the psychological travails experienced by such offspring.

Our findings suggest that a majority of people with a parent suffering from midstage dementia and beyond are quite fearful they, too, will develop the disease. This fear is most intense amongst the offspring of those with DLB, as well as those in the 4049 age group. This study also finds that individuals generally feel significant guilt in regards to their parent’s disease and the caregiving decisions they, the offspring, have had to make for that parent. The offspring of a parent with EOD are particularly sensitive to this guilt. And while the shame of owning these genetic tendencies is not as intense as the fear or guilt, this study does find that the stigma surrounding dementia still exists, to a degree, across all participant groups.

The hope is that this study’s results demonstrate why there may be a need by memory care facilities and in-home caregiving services, insurance companies, and national healthcare schemes to make more readily available therapy techniques such as Cognitive Behavioural Therapy, Mindfulness based Cognitive Therapy (MBCT), and Dialectic Behavior Therapy (DBT) to the offspring of individuals suffering from midstage dementia and beyond.

One limitation of the present study is that of self-assessment? as with any self-reported data, there can be exaggerations of data sets due to recall bias and/or self-selection. Indeed, it’s possible that extraneous factors like unfamiliarity with self-assessment protocols, lack of exposure to dementia education, and even a dearth of self-confidence caused by unfulfilled family expectations may influence the accuracy of any self-assessment pertaining to this topic.

Secondly, we must also consider that the offspring most willing to participate in such a study are, quite possibly, those most engaged with the parent and his/her dementia issues, suggesting, perhaps, a relatively heightened emotional and/or psychological response to self-survey questions.

With that said, research suggests that the internal consistency of self-assessment is generally high [23]. In addition, data from the present study does remain relatively consistent across genders and national borders, and throughout age groups and dementia subgroups.

The author of this study would like to thank following people: Shellie Rae for her tireless administrative support? Heidi Finstad for her generous financial support.