Objective: The objective of this study was to determine the frequency of Tempormandibular joint disorder (TMD) among medical and dental undergraduate student, its severity and distribution among different gender and age group by using Fonseca questionnaire.
Methods: The design of the study was cross-sectional and data were collected by non-probability purposive sampling by providing the brief questionnaire consist of ten questions. After informing the purpose of study, those who were fulfilling the inclusion criteria, asked to fill the questionnaire. Total three hundred and seventy two forms were filled completely considered in the study out of four hundred, with 93% response rate. The answer were filled by marking “yes”, “sometimes” and “no” and code allocated to individual answer like “10”, “5” and “0” respectively.
Results: Total 372 samples were responded in this survey, The study revealed that out of total 372 students, No TMD were observed with 214 (57.4%), with TMD were observed with 159 ( 42.6%), among them mild TMD 122(32.7%), moderate TMD 29(7.8%), severe TMD 8 (2.1%). Severity of TMD gives association with education. Besides, as age of students increases the level of symptoms also increase. On the other hand, between gender, females are more affected.
Conclusion: Our study found that the TMD is a common problem in studied participants and the severity of TMD was found higher among dental students. Temporo-mandibular joint disorders give association with gender.

Temporomandibular joint disorders has been defined as a collective term that can be a subgroup of painful orofacial disorders involving grinding or clenching of teeth, pain in the temporomandibular joint, fatigue of craniofacial muscles and mandibular movement limitation [1,2]. It is the topic of interest since many years and its management consist of variety of treatment options [3].

Early diagnosis and treatment of TMD is very important because it is progressive disease and at late stages it become irreversible due to damage to TMJ [2,4]. With the passage of time certain factors worsen the condition include joint inflammation with the presence of pain mediators (substance P), inflammatory mediator (cytokines and interleukins) and tissue necrosis factor (TNF) in synovial fluid joint. TMD is three time more prevalence in females as compared to males [2,5]. Another study was conducted in India that the perceived stress levels in the BDS students are significantly higher than MBBS students [6].

Very few studies based on stress related TMD in undergraduate medical students in Pakistan has been found in literature reported by the authors. Our objective of study was to find the frequency of TMD among medical and Dental students and to compare the severity level of TMD with gender, education and age group.

Many authors have recommended the use of Fonseca’s anamnestic index (FAI) because it simple, speed and cost effective. Fonseca’s questionnaire gives a multidimensional evaluation. It is composed of 10 question that screen for the presence of pain in TMJ, head and back pain while chewing perception of malocclusion of emotional stress.

A cross sectional study was conducted in Liaquat College of Medicine and Dentistry and Darul-Sehat Hospital, Karachi from March 2017 to September 2017. A Fonseca’s questionnaire was used to assess the frequency of TMJ disorder among the Medical and Dental students. The study was approved by the institutional ethical committee. Total 372 forms were filled out. Those who fulfilled the inclusion criteria were invited to participate in study. After explaining the purpose of research, written consent was taken from those who agree to participate in study and brief questionnaire were given to them.

It was calculated using openEpi sample size calculator version 3.01, after inserting 53.2% prevalence of some degree of TMD [7] at 5.1% margin of error and 95% confidence interval we required at least n=368 for this study.

Included participants of age between 18- 24 and medical and dental under graduate student while exclusion criteria includes non-medical and dental staff , students age 24 above, house officer or postgraduate medical and dental students, those who have history of any systemic illness and students currently under orthodontic treatment. All the participants were provided with the Fonseca questionnaire to classify TMD severity and also explained about how to fill this form. Form consist of total 10 number of questions and each question have to be answered by “yes”, “no” and “sometimes”. Only one option is allowed to mark. There is no allocated time to fill out the form. After collecting all questionnaire, answers were marked with code which include “yes=10”, “sometimes=5” and “no=0”. The sum of the values for all 10 answers was used to classify each subject according to the criteria [8] (Table 1).

Data were stored and analyzed using IBM-SPSS version 23.0, Count and percentages were reported for TMD, and its severity was associated with gender and education using Pearson chi-square test of independency. p- Value less than 0.05 was considered significance.

Results show that 57.4% mild TMD cases falls in age group 17 to 20 years old. Whereas, 55.2% in moderate TMD cases of age group 21-26 years old but these results were not statistically significant with (p-value=0.23) . Results shows that 41.1% No TMD in male students whereas, 100% severe TMD in female students were found and these results were observed statistically significant with P=0.003. Results shows that 57.0% No TMD in MBBS students whereas, 87.5% severe TMD in BDS students were found and these findings also gives statistical significance with p value less than 0.01 (Table 3 and Figure 1).

Table 3: Association of TMD with age group, gender, and education. 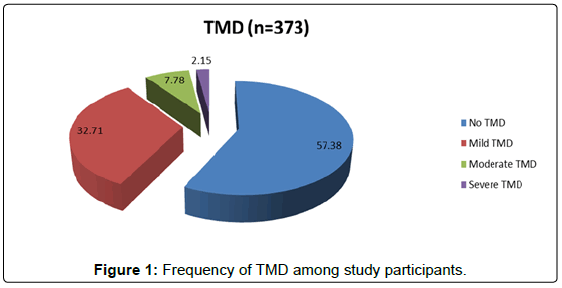 Our study provides the information about the frequency and severity of TMD, based on Fonseca, in medical and dental students, Karachi. Response rate of our study is around (93%) consider as satisfactory as compared to other studies [9,10] . Results showed that participant suffering from TMD are 42.6%, as the participants were medical and dental professionals, but most of them were unaware that they have TMD. By using simplified questionnaire they were able to identify the unnoticed sign and symptom which might lead to greater problem in future.

In the present study, participants with TMD were further classifying as mild TMD (32.7%), moderate TMD (7.8%) and severe TMD (2.1%) among the participants, the Dental undergraduate have higher level of stress as compare to medical students. These finding were similar to other studies. One study conducts on Arab medical students show similar results; another study from UK revealed similar result. Several risk factors are asserted but the level of stress and anxiety is mostly associated with academic and psychological domains so these findings are also correlated with the literature. It seems that the Fonseca’s questionnaire is a simple and effective tool to find out the problem related to Temporomandibular joint.

However, literature review of health profession is counterpart shows more stress and the highest frequency occurred in medical student, followed by dental and then nursing students. Despite of this, our study found the level of TMD was greater among dental student rather than medical undergraduate. This was new and important finding of our study which is different from the results of other studies available in literature. Regarding gender, our study result showed that TMD level was higher in female as compare to males. Similar results were found in the study conducted in Peshawar, which shows female predominance of TMD [11]. It was considered that in society the level of stress is higher in females as compared to females of western societies as the studies on western society show equal distribution of TMD among male and female [12,13] Pedroni et al. also conducted study and observe 68% of participants are TMD positive among them 84% are females [14]. A study from Brazil conducted on 200 students and reported the severity of TMD among which 2.45% having severe TMD, 13.93% had moderate TMD, 83.6% had mild TMD and 39% are disease free [15].

Our study concludes that female are more affected with TMD and regarding profession, BDS students are more likely to have higher frequency of TMD. These results are consistent to other studies found in literature. The study wrap up that TMD levels gives significance association with gender and education but there was no significant association observed for age group. Mild TMD stage was common in our samples.

The limitation of our study are such as use of brief questionnaire, convenience sampling, and inclusion of only medical and dental undergraduate student. Further studies should be conducted with aid of clinical and radiographic finding to rule out the level and degree of TMJ disorder and their relation to Fonseca’s questionnaire. A brief and simplified questionnaire is effective and helps to identify a TMD patient and aid in classify patient into different categories according to disease severity. This questionnaire should include in the process of screening, which will help in diagnosing the disease at early stage and enabling to provide necessary treatment for the management of pain of Temporomandibular origin and prevent future complication which is key for successful TMD treatment.