Gastric Emphysema and Its Possible Causes: Diagnosis and Management

Gastric Emphysema and Its Possible Causes: Diagnosis and Management

Gastric Emphysema (GE) is not an isolated entity but is always a sign of an underlying disease [1]. It refers to the presence of air within the wall of the stomach. The presence of air within the G-I tract wall can appear at any site, from esophagus to the rectum [2]. The stomach is the least frequent site of presentation, accounting hardly for 9% of all cases reported [3]. It is not life threatening [4] and can be caused by a variety of iatrogenic and non iatrogenic events [5-9]. Gastric emphysema in the context of gastric pneumatosis, including emphysematous gastritis as well, was described for the first time more than one century ago by Fraenkel. Its pathogenesis and etiology is not yet fully understood and still debated. Evidences from single case reports and series have attempted to explain its pathogenesis focusing mainly on mechanical, bacterial or mucosal damage theory [10-12]. Many of the possible causes described in episodic retrospective cases might overlap and increase the chances of developing GE. We present the case of a 64-year-old women with main diagnosis of pancreatic neuroendocrine tumor, that went through many clinical complications leading finally to GE.

A 64-year-old women presented in 2013 with a neuroendocrine pancreatic cancer of Vater Papilla, moderately differentiated, with liver, lymphonodal and suspected lung metastases. She was first treated with capecitabine and temozolamide and when she progressed on December 2014, was received everolimus for almost one year. Both treatments were complemented by octreotide until December 2015. At that time she presented with mechanical jaundice due to biliary drainage obstruction requesting a stent implant at the choledochus level. The biopsy performed during the procedure showed an evolution of the carcinoma into poorly differentiated form. Considering this histology the patient received a third line with carboplatin and etoposide; the first cycle was complicated by pancytopenia, requiring the administration of G-CSF and dose reduction by the second cycle. At this time the patient developed multiple episodes of vomiting, frequently during the day. The laboratory showed severe hypoglycemia, probably paraneoplastic with HbA+ 5.4%, C-Peptide 722 pmol/l, and anti GAD chemotherapy. Unfortunately, after the third cycle the disease progressed again and the patient passed away (Figures 1-4). Figure 1: Abdominal scout image from a computed tomography illustrating the presence of air around the stomach. 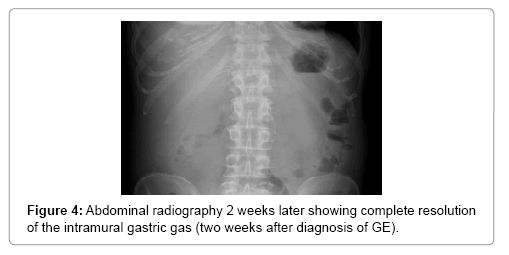 Gastric pneumatosis (GP) has been classified as either idiopathic (15% of cases) or secondary (85% of cases), ranging clinically from a benign condition to a fulminant disease [13-15]. The clinician challenge in front of this entity is defining weather we are in front of gastric emphysema (GE) or emphysematous gastritis (EG), [16-18], as the two entities give contrasting prognosis, the first one being more benign [1].

While the second is associated with a dramatic clinical presentation, being caused by gas forming organisms with systemic toxicity, sepsis, shock, abdominal pain and a high mortality rate up to 60% [17,18]. The clinical management of EG requires an intensive and rapid approach due to the very poor prognosis, and is not the subject of this report.

The main tool leading to diagnosis remains the abdominal radiography, and abdominal CT scan. With the added sensitivity and increased utilization of modern computed tomography, this entity is being diagnosed more often, posing a difficult clinical dilemma, as the clinical significance of GP ranges from benign to catastrophic [19-26]. Gastric emphysema presents as hypodense, lineal or curve fringe on the gastric wall along with distension, without evidence of gastric wall thickening, the later one being typical for emphysematous gastritis and helping for differentiation diagnosis [20-22].

The main explanations for GP are that it originates by disruption of the gastric mucosa leading to air dissecting into the gastric wall. A combination of alterations in mucosal integrity, intraluminal pressure, bacterial flora, and intraluminal gas, each of them or together play an interactive role in GP formation [5-7].

Traumatic GE caused by transmural diffusion of the air after a mucosal injury, like biliary stenting has been reported [23] and in our case ERCP or gastrostomy could have been contributory. Nasogastric tube placement has been accused as well but in our case it helped relieving the symptoms. Gastric outlet obstruction due to peptic ulcer, pyloric stenosis, carcinoma of the antrum or gastric volvulus [5,7] is another described mechanism of genesis. In our case the patient did have a direct gastric obstruction due to neoplastic progression on the pancreas head and gastroparesis, causing high intramural pressure, and facilitating superficial mucosal tears when vomiting, as was the case in our patient. Vomiting has been often described as a very common cause, but in our case it is not clear whether this is a cause or a response to gastroparesis and previously set GE.

High doses of corticoids therapy have also been described [7,8,27-39] as predisposing cause. Our patient was treated in the last weeks with corticoids due to her hypoglycemia. However, in this case it may have a minor role because of the continuing therapy even after GE was resolved. Mucosal theory try to explain the pathogenesis by mucosal disruption due to associated malignancy, immunosuppression, or massive inflammation of mucosa post chemotherapy (reported in some autopsy cases). Cases have been reported accusing just malignancy itself as a possible cause of GE, although rarely documented Adding to this evidence, in our case we assume also that mucosal injury was caused by cytotoxic agents given 3 weeks prior to presentation [31-33]. There are many reports on conventional chemotherapy and GE with agents such as cyclophosphamide, methotrexate, vincristine, doxorubicin, daunorubicine, doxetacel, cytarabine, 5-fu, paclitaxel, etoposide, irnotecan, cisplatin [31,32,34,35] and also lately new target drugs like erlotinib, gefitinib [36,37] or monoclonal antibodies like bevacizumab [38]. The timing of onset of symptoms is 3 weeks up to 3 months after chemotherapy and longer with targeted therapy or antibodies (3-14 months). In our case our patient has gone through a first cycle with carboplatin-etoposide 3 weeks before the onset of symptoms. The reported chemotherapy cases are almost always associated with neutropenia, describing neutropenia as an important factor for the development of GE [31,32,34,35]. In our case, the patient experienced grade 4 neutropenia after 2 weeks of the first cycle of chemotherapy and 1 week prior onset of symptoms of GE. Other extrinsic factors like alcohol abuse, long consumption of AINS [29] or extra-gastric processes like pulmonary GE caused by alveolar rupture and air leaks through the mediastinum and dissecting downwards to reach the stomach wall [1,27,28], chronic pulmonary obstructive disease, polymyositis, recent abdominal surgery, perforated appendicitis, intestinal infarction and ischemia, small bowel volvulus, following extensive CPR and mechanical respiratory assistance, [28] have been reported as well. We did not find any correlation with these factors in our case. There are limited data concerning treatment of GE and the reports exclusively on stomach are rare and not fully emphasized.

There is no available standard treatment for this condition. The treatment depends on presenting symptoms and comorbidities. Patients either stay asymptomatic, therefore the incidence may be underestimated, or present with gastrointestinal symptoms like nausea, vomiting, epigastric pain. Once the diagnoses are confirmed and emphysematous gastritis has been excluded, conservative treatment can be effective. It is of a vital importance the differentiation of cases needing an emergent surgery intervention and cases who can be treated with conservative approach. Prognosis depends on underlying disease and complications. GE is usually benign, with very few cases reported of recurrence, nevertheless, mortality has been reported mainly for emphysematous gastritis and not GE and for the first one is relatively high [17,18]. Moris et al. [40] in a retrospective study of 97 patients with intestinal emphysematosis, where just 5% were gastric emphysematosis, reported a mortality rate of 16% in the group receiving surgery compared with a 6% mortality rate in the group who received just conservative treatment.

In stable patients, a clinical improvement with resolution of the emphysema within 72 h has been reported with the use of nasogastric tube for decompression [41], Algorithm for the management of intestinal emphysematosis have been attempted however without emphasizes on GE so their application is limited [42,43].

The presence of air within the mural wall of the stomach may be associated with a wide range of conditions, ranging from benign to fatal, and combination of clinical presentation, imaging, and biochemical parameters should guide diagnosis, focusing mainly on early differential diagnose of GE and emphysematous gastritis. These two entities have different etiopathogenesis and impact, intraabdominal findings and different prognosis. Considering the chronologic precipitation of the G-I complications we should be aware of this complication leading us to a rapid decision on treatment approach and efficient management of these cases.

Copyright: © 2018 Cekani E, et al. This is an open-access article distributed under the terms of the Creative Commons Attribution License, which permits unrestricted use, distribution, and reproduction in any medium, provided the original author and source are credited.