Giant Cell Tumor of Bone: Correlation between Immunohistochemical Expression of Metallo-Proteinases 9 with Clinical and Radiographic Parameters

Giant Cell Tumor of Bone: Correlation between Immunohistochemical Expression of Metallo-Proteinases 9 with Clinical and Radiographic Parameters

Introduction: The Giant Cell Tumor of Bone (GCT) is a benign neoplasm, with local aggressive behavior and potential to produce distant metastases. Despite the recent emergence of drug therapies, TGC (Tigecycline) treatment is still essentially surgical with wide resections or intra-lesional ones depending on the location and stage at diagnosis. Piece meal resection, however, are associate with a high risk of local recurrence. Recent immunohistochemical studies on the GCT demonstrate the presence of various proteins and metalloproteinases with variable expression in the tumor cell surface. It is believed that the expression pattern of such substances may correlate with clinical outcome and the risk of local relapse.

Objective: To identify the expression pattern of metallo-proteinases (MMPs) in Giant Cell Tumor Bone biopsy samples registered in the Department of Pathology of the Federal University of São Paulo - UNIFESP and correlate them with the clinical outcome of the patients.

Methods: A retrospective study of 33 patients with GCT bone through immunohistochemical study of slides stored in the department of Pathology to check the pattern of expression of MMP9 through imaging method. Quantitative evaluation of this expression by Image J. software and correlation with local recurrence, metastasis, clinical and epidemiological data.

Conclusion: There is a prognostic correlation between quantitative values of average MMP9 immunostaining and the tumor local recurrence.

Giant Cell Tumor of Bone (GCT) is a benign neoplasm of mesenchymal origin. It represents 6% of all bone tumors [1,2]. GCT usually presents as a locally aggressive lesion that causes severe disturbances of the bony architecture (Figure 1). 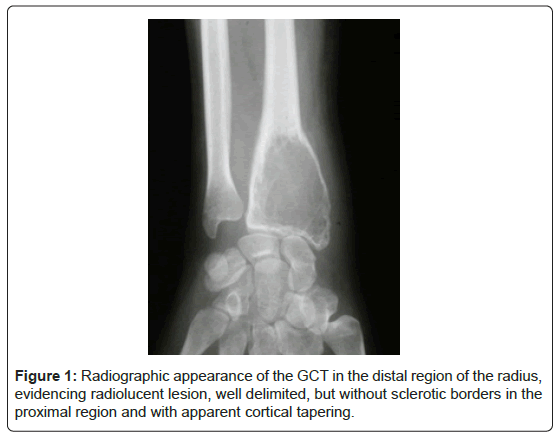 Figure 1: Radiographic appearance of the GCT in the distal region of the radius, evidencing radiolucent lesion, well delimited, but without sclerotic borders in the proximal region and with apparent cortical tapering.

Despite its benign nature, the tumor shows a relatively uncertain behavior. Local relapse is the most frequent complication and occurs in 15% to 25% of the cases [3,4] while distant metastasis may develop in 2% to 6% [1]. Despite new pharmacological therapies such as Denosumab, surgical treatment - either by piecemeal or wide resection-remains the gold standard therapeutic option [5]. Radiologic staging classification defines the best surgical approach. Enneking staging system, later modified by Campanacci is the most used and it categorizes patients into three grades [6,7].

Piecemeal resection is indicated for the treatment of grade I and II tumors, while grade III tumors may be treated either with piecemeal or wide resection. Image classification and histological features, however, cannot predict a further local recurrences or distant metastasis [8,9]. The establishment of new biological markers would, therefore, be useful to guide therapeutic decision regarding the best surgical approach.

Matrix metallo-proteinases (MMPs) belong to a group of proteases responsible for the degradation of the extracellular matrix and basement membranes and play an essential role in neoplastic processes, such as tumor invasion and metastasis [10]. The role of MMPs in GCT is still controversial and may relate to tumor relapse [11,12].

This study aimed to evaluate the usefulness of the MMP9 expression as a predictive factor of tumor relapse in patients with GCT and to correlate the MMP expression with recurrence-free survival.

We conducted a retrospective cohort study of patients diagnosed with GCT from 1980 to 2013 at the Department of Orthopedics of Universidade Federal de Sao Paulo (UNIFESP). Patients with a follow-up period less than six months were excluded. Patients from all age groups were included. All the available data were retrieved from medical records and included information on age, gender, tumor location, Campanacci grade, the presence of pathological fracture, Aneurysmal Bone Cyst (ABC) at diagnosis and surgical method used for the treatment of the primary tumor as well as the occurrence of local relapses or distant metastasis. Reachable patients were invited to attend a new medical visit for reevaluation.

A senior pathologist reviewed the histological diagnosis of GCT, and a complementary immunohistochemical study was performed in all the specimens to quantify the MMP9 expression. The Institutional Review Board approved this study. Due to the strictly observational nature of the study, informed consent was waived.

Digital analysis of the images

Image capturing was based on the hotspot principle, starting at the most positive area, with the capture of 5 consecutive microscopic fields at 400 x magnification. A conventional Olympus BX51 optical microscope with a planar achromatic lens was used. A macro was created for analysis of all captured images, with Threshold and Binarization. The coloration of the images produced by the macro corresponds to the antibody used in the specimen and represents the expression of the MMPs (Figure 2). The images captured by the microscope were compared those generated by the macro and were quantified using the Image J software (NIH USA) software. The values obtained represent a relative area, the area of immunoexpression of MMP related to the total area of the image and, therefore, they do not have a unit and are expressed as pure numbers. Five capturing were performed for each species, and their mean value was recorded. Figure 2: A, C, E, G, I Photomicrographs of MMP9 expression by hotspot of case 1. B, D, F, H, J macro image produced by Image J software corresponding to the area of expression of each captured image.

Statistical analysis: Clinical and demographic data are reported for all patients included in the study. Categorical variables are expressed in frequencies and percentages and continuous variables as the mean and standard deviation (SD). Categorical variables were compared using Pearson’s chi-square or Fisher’s exact test, and continuous variables with the t-student test or ANOVA. The correlation between MMPs expression and recurrence-free survival was analyzed using the Spearmen’s rank correlation test. The cut-off predictive value of recurrence of MMP9 was estimated using the Younden index. A two- sided p-value<0.05 was considered significant. Statistical analysis was performed using the software SPSS version 19.0 and R version 3.0.2.

Of the 114 cases of primary GCT diagnosed in the period, only 33 had histological specimens and complete clinical and follow- up data to be included on the study. Nineteen (57,5%) patients were female. Mean age was 30.5 years (SD, range 16-57 years). The most frequent location was the knee, 22 (66.6%) cases. Mean follow-up time was 67.8 months (range 6-180 months). Relapses occurred in 9 (31%) patients. One patient had two recurrences, and another had three. Only one patient had pulmonary metastasis. All patients with local recurrences underwent reoperation with a wide resection approach. MMP9 staining was positive for all 33 GCT specimens. Mean (SD) value was 15.13, respectively. The clinical and radiologic characteristics of the patients are shown in Table 1 and Figure 3.

Table 1: Clinical and radiological characteristics of patients with GCT. 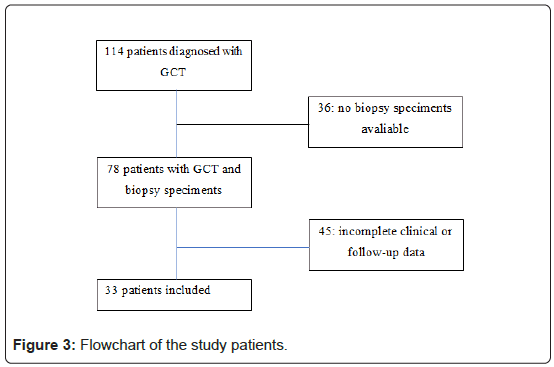 Figure 3: Flowchart of the study patients.

Table 2: Comparisons between patients with and without tumor relapse.

GCT is an aggressive tumor with a high rate of local recurrence, high invasiveness and complex biological characteristics. In general, it is difficult to predict the prognosis of patients with GCT with radiological, histological or other clinical criteria.

Local relapse is historically high and tends to occur in the months following the treatment up to two years [14]. Surgical technique and tumor location affect this [15]. Relapse rate has decreased due to improvements in surgical techniques and local adjuvancy.

New criteria could guide the therapeutic decision and the indication of the best surgical technique if distinct biological characteristics were detected in relapsed or metastatic GCT. This has motivated several studies in the last two decades in search of these prognostic characteristics and, among them, the metalloproteinases show a promising field in this sense.

MMP activity in neoplasia has been studied for many years and now is clear that it’s not restricted to the physical degradation of extracellular matrix elements, but it includes influences on cellular proliferation, survival, and angiogenesis [8].

The few studies evaluating prognosis and expression of metalloproteinases in the GCT focus on MMP2 and MMP9 and the expression scores are semiquantitatively [8,16]. Something that could cloak the relationship between the expression of such markers and prognostic factors.

In this study, we’ve quantitatively analyzed the expression of MMP9 by calculating the area of expression in the photographed slides, then estimating an exact proportion in relation to the total area of the image. We believe that this method can be used as a reliable prognostic tool in tumoral relapse. Quantitative mean MMP-9 expression and local relapse in this study were statistically significant (p=0,036). Demonstrating a direct prognostic correlation of MMP9 with GCT local relapse.

Our study found no significant correlation between, tumor location, fracture or ABC component with GCT relapse. This suggests that they may not have any prognostic value. Other studies support these findings. [8,17] The differences between GCT relapse and Campanacci staging system were demonstrated in other studies, suggesting a prognostic value [18]. Our studies demonstrated a similar statistically correlation (p=0.032). Nevertheless, there were no significant difference between the Campanacci staging system and MMP9 expression, suggesting that the tumor relapse in higher Campanacci grades might be owed to surgical difficulties in remove bigger and aggressive tumors.

On the other hand, Hanley et al. Observed a significant difference between the local invasion of the GCT and higher values of MMP expression [8,13]. This suggests that there are still room for debate about local invasion of tumor and prognosis. Based on our studies, the cutoff point of MMP9 was estimated in correlation with local relapse. The value of 21.5 was adopted as a reference with a positive predictive value of 71.4%, that is, the risk of relapse would be 71.4% in patients with MMP9 values greater than or equal to 21.5% of expression. We believe that other studies should be conducted to validate this prognostic tool [19].

Our study allows to conclude that, there is a correlation between the expression of metalloproteinase 9 and the local relapse of the Giant Cell Tumor of the bone and the Campanacci staging was not corelated to MMP9 expression.

The study was approved by the Research Ethics Committee (CEP) of the Federal University of São Paulo UNIFESP under registration number 1,150,993. The ethics committee waived the need for individual informed consent. There is no individual person’s data in any form. For the long evaluation period of the study, patient’s data were collected only from the medical records.

The ethics committee waived the need for individual informed consent for publication.

Availability of data and material

The datasets used and analysed during the current study is available from the corresponding author on reasonable request.

Copyright: © 2021 Bellan DG, et al. This is an open-access article distributed under the terms of the Creative Commons Attribution License, which permits unrestricted use, distribution, and reproduction in any medium, provided the original author and source are credited.