Copyright: © 2017 de Mello AS, et al. This is an open-access article distributed under the terms of the Creative Commons Attribution License, which permits unrestricted use, distribution, and reproduction in any medium, provided the original author and source are credited.

Objective: Pompe disease is an autosomal recessive disorder of lysosomal storage, caused by the deficiency of α-glucosidase lysosomal enzymes. Several studies have demonstrated the involvement of oxidative stress in numerous pathophysiological changes. To assess parameters of oxidative stress in patients with Pompe’s disease (PD) and in normal controls, establishing a possible analysis of the differences between both groups. Methods: Evaluation, in plasma samples and leukocytes, of the enzyme activities of α-glucosidase, of antioxidants SOD1 and CAT enzymes, as well as the levels of lipid peroxidation (TBARS), protein damage (carbonyl) and non-enzymatic antioxidant (sulphydryl) defenses on samples of 10 individuals with PD (4 women and 6 men) and 10 healthy individuals. Results: There was a reduction in the enzymatic activity of α-glucosidase in samples of leukocytes of patients with PD compared to samples from normal subjects, confirming the deficiency of this enzyme. With respect to oxidative stress, there was an increase of carbonyl groups in the plasma of the PD patients studied relative to controls, suggesting oxidative damage to proteins. No differences were observed between the two groups for the remaining oxidative stress parameters evaluated. Discussion: We conclude, therefore, that the presence of PD is a significant factor to increase the oxidative stress levels, with no change in levels of antioxidant enzymes. It is suggested that further studies with other lysosomal storage diseases be carried out in order to propose, in the future, antioxidant therapies to prevent protein damage.

Pompe disease (MIM 232300) is an autosomal recessive disorder of lysosomal storage caused by the deficiency of α-glucosidase lysosomal enzymes (GAA, EC 3.2.1.20), which occurs in an estimated 40,000 to 100,000 births across the globe [1,2]. The enzyme deficiency of lysosomal hydrolases, which are enzymes that act on degradation in lysosomes, causes various genetic diseases, classified as lysosomal storage diseases (LSDs). These diseases are severe, with a broad spectrum of skeletal abnormalities, impaired nervous system, organ dysfunction and accumulation of lipids in complex tissues [3].

These diseases are known as inborn errors of metabolism, and several studies have demonstrated the involvement of oxidative stress in numerous pathophysiological changes observed [4-9]. Oxidative stress is characterized by an imbalance in oxidant and antioxidant molecules with this imbalance causing possible cellular damage [10]. This condition is caused either by an overproduction of pro-oxidants or by a deficiency in the antioxidant system which may cause damage to lipids, proteins and deoxyribonucleic acid (DNA) [11,12].

The deleterious effects of reactive species over biomolecules results in the manifestation of potential oxidative damage [13-15]. Biomarkers based on the oxidative damage of proteins are very important due to their implications, which are the functional alteration of enzymes, transport of proteins and others. The products resulting from the oxidative damage of proteins may contribute to the generation of secondary damage to other biomolecules. Damage to the DNA, for example, may be irreversible, due to the functional alteration of repair enzymes [14]. Although controversial the precursor protein-mediated accumulation of amyloid-β-peptide (Aβ) is an important phenomenon in the pathology of Alzheimer’s disease. If the production and clearance of Aβ is deregulated, the blood-brain barrier is compromised [16].

In this sense, the aim of this study was to analyze the levels of oxidative stress markers, as well as the levels of antioxidant defense markers, in order to seek a better understanding of the cellular changes that occur to patients with PD compared to healthy controls.

This study was characterized by a prospective study. The diagnosis of PD in patients happened at the Federal University of Rio Grande do Sul (Porto Alegre, RS, Brazil).

Blood samples of 9 mL were collected directly (by one of the researchers of this study) from 10 patients (4 women and 6 men) previously diagnosed with PD and from 10 controls (6 women and 4 men) (Table 1). For donors over 18 years old or those responsible for underage donors, an informed consent was obtained according to the committee guidelines. All samples were identified with numbers, preserving the identity of donors, who were not informed of the results nor had their identities revealed at any stage of the procedure. As a criterion for inclusion of the samples, individuals had to be at least 7 years old, weigh more than 18 kg and be over 90 cm tall.

The blood was processed for plasma separation and leukocyte isolation according to the Skoog and Beck [17] method.

We carried out the sample size calculation for comparing averages with different variances establishing the level of significance at 5% and power by 90%. For this we used the MiniTab® 15 statistical software. The calculation indicated 10 subjects per group for a total of 20 samples.

The Research and Ethical Committee of Centro Universitário Metodista - IPA (no. 47608615.5.0000.5308), ethically and scientifically approved of the research protocols and consent forms, as well as the investigation.

The activity of the α-glucosidase enzyme was evaluated according to another method [18], which uses 4-methylumbelliferyl- α-Dglucoside (Sigma) as the synthetic substrate, together with acetate (Sigma) in standard conditions (pH 4.0 and 37ºC). Data are expressed as nmol⁄h⁄mg of protein [19].

Substances reactive to thiobarbituric acid (TBARS) are used as a measure of lipid peroxidation and in this case were dosed according to Wills [20]. The TBARS reacts with the lipoperoxidation products, forming a compound of pink color, which was measured in a spectrophotometer (535 nm). The results were expressed in nmol TBARS/mg protein.

Oxidative damage of proteins was measured by determining the carbonyl groups and is based on the reaction with dinitrophenylhydrazine (DNPH) according to Levine et al. [21]. The DNPH reacts with the protein carbonyls to form hydrazones, which can be measured spectrophotometrically at 370 nm. The results were expressed in nmol per mg protein.

The quantitation of the total concentration of sulfhydryl groups provides a view of the oxidative damage level of plasma protein that is based on the reaction with 5,5’-dithiobis-2-nitrobenzoic acid (DTNB) and Portion according to Aksenov and Markesbery [22]. Results were expressed as nmol/mg protein.

proteins were quantified by the Lowry method [19] using bovine serum albumin at a concentration of 1 mg/ml as standard.

Data from carbonyl, SH and SOD1 and the enzymatic activity were statistically analyzed by Student’s t test, followed by Levene’s test. The results were reported as mean ± standard deviation. As to the TBARS and CAT, they were expressed as median (interquartile range) and compared using the Mann-Whitney U test. P values <0.05 were considered significant. All analyzes were performed using SPSS, version 17.

Once confirmed the enzyme deficiency, we observed a decrease of the enzymatic activity of α-glucosidase in the leukocytes samples from PD patients compared to samples of normal individuals (Table 1).

Enzyme deficiencies are characteristic of DLDs and can induce a cascade of events that result(s) in side effects such as the production of reactive oxygen species (ROS) [25-27]. In contrast, production and degradation of ROS are generally balanced in the bodies of healthy individuals [25].

Regarding the oxidative stress parameters, there is an increase in protein oxidation levels (carbonyl groups) in PD patients plasma compared to controls, thus suggesting oxidative damage to proteins (Figure 1). Such damage can be harmful in vivo by direct effects (change or loss of function of enzymes or transporters and indirect contribution to DNA damage). Furthermore, the direct alteration of the protein structure by oxidation can trigger an autoimmune response, once modifier proteins are recognized as non-self by the immune system [14]. In relation to the protein oxidative damage biomarkers, the carbonyl groups are the most relevant [28], these are generated as a result of direct action of the reactive species on the amino acid side chains or indirectly upon glucose binding (Glico oxidation process) or aldehydes (including those formed during lipid peroxidation). The increase in the protein carbonyl group is associated with numerous pathological disorders, including rheumatoid arthritis, Alzheimer’s disease (AD), respiratory distress syndrome, Parkinson’s disease and atherosclerosis [29]. Particularly in the AD, Aβ leads to senile plaques, which, together with hyperphosphorylated tau-based neurofibrillary tangles and synapse loss, are the principal pathological hallmarks of AD. Aβ is associated with the formation of ROS and nitrogen (RNS) species, and induces calcium-dependent excitotoxicity, impairment of cellular respiration, and alteration of synaptic functions associated with learning and memory [30]. 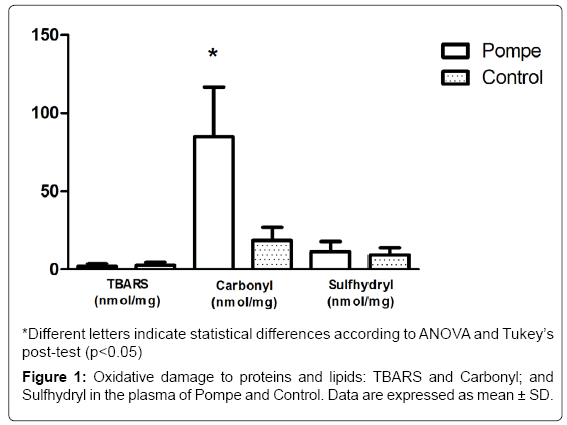 Figure 1: Oxidative damage to proteins and lipids: TBARS and Carbonyl; and Sulfhydryl in the plasma of Pompe and Control. Data are expressed as mean ± SD.

As for the levels of lipid peroxidation (TBARS), we did not observe any significant difference among individuals with PD and healthy controls (Figure 1). The data found in TBARS, corroborated by the literature, shows the difference in the values between the groups studied [26]. These results confirm the findings obtained by this group in a previous study [31], which also showed no significant difference in the parameter between patients with Gaucher’s Disease and healthy controls, showing that the cells seem to use another form of stress management in patients with enzyme deficiency.

Regarding the non-enzymatic antioxidant defenses (SH), no significant differences are shown between the groups studied in this paper (Figure 1), as previously found by Bianccini and colaborators in Fabry Disease [32]. When investigating the parameters of oxidative stress, pro-inflammatory cytokines and levels of globotriaosylceramide (Gb3) in patients with Fabry disease undergoing enzyme replacement therapy (ERT), the results suggest the pro-inflammatory and pro oxidants states that occur are correlated and appear to be induced by Gb3 in Fabry patients.

The results obtained in this study with markers of antioxidant defense CAT and SOD1 (Figure 2) showed no difference between groups, differing from other studies that show statistical differences between the control group and patients groups of Gaucher disease [32] and Mucopolysaccharidosis type IVA [33]. In addition to the enzymatic activity of SOD1 and CAT, we also evaluated the relationship between them, in which no changes were observed (p=0.42) in this parameter on both groups of the study (Figure 2). The balance between activities of SOD1 and/or CAT in cells is critical in determining the levels of superoxide radical and hydrogen peroxide. This balance, along with the highly toxic, through the Haber-Weiss reactions or Fenton [34]. 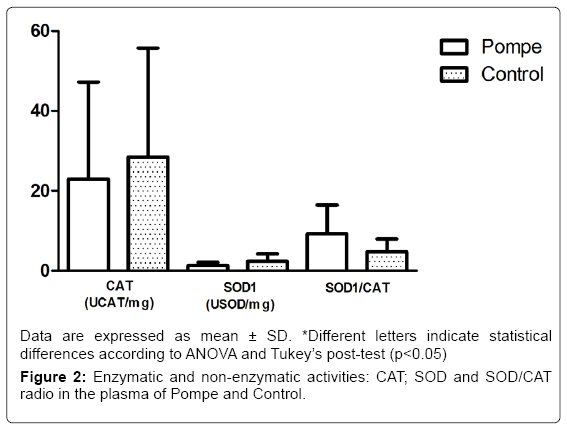 Figure 2: Enzymatic and non-enzymatic activities: CAT; SOD and SOD/CAT radio in the plasma of Pompe and Control.

Taken together, the data shows increased levels of carbonyl in the plasma of PD patients compared to healthy controls, suggesting oxidative damage to proteins. However, the antioxidant defenses showed no increase in their levels on PD patients, meaning their defenses are unable to act, allowing future studies to consider an antioxidant supplementation in order to reduce oxidative damage.

In this study, α-glucosidase activity was chosen because it is deficient in this genetic lysosomal disease occurring in Brazil. Therefore, due to the specificity and consequent quality of life of the patients, the sample number is small in laboratory and clinical studies on samples of rare diseases. In order to improve the knowledge of the effect of interventions in this disease and the expectation of creating prevention strategies, we will carry out a randomized clinical trial.

In conclusion, the results show that the enzymatic deficiency of α-glucosidase, a characteristic of PD, alters the oxidation system associated to proteins. This is involved in the structures that move the body, affecting the skeletal muscles of individuals. 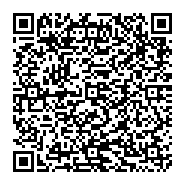