In this case report we present a young, healthy male, presenting to hospital 5 days after ingesting Roundup®, a glyphosate-containing herbicide. His main complaints included haematemesis, pleuritic chest pain and dyspnoea. Initial assessment revealed a Left Pneumothorax (PTX) for which an intercostal drain (ICD) was inserted. On further evaluation he had Acute Kidney Injury (AKI), toxic hepatitis and developed a right sided PTX on the third day of admission. Pneumomediastinum was identified on follow-up chest x-ray (CXR). These findings, in conjunction with his presenting complaints and the clinical finding of Hamman’s crunch on auscultation, a diagnosis of Boerhaave’s syndrome was postulated, which was confirmed on contrast enhanced Computed Tomography (CT) of the chest with swallow. A brief overview of glyphosate toxokinetics and Boerhaave’s syndrome is provided.

Glyphosate is one of the most common herbicides found worldwide ever since its introduction in 1974, preferred by many for its broadspectrum herbicidal activity, cost-effectiveness and environmental safety [1]. Concentrations range from 1% to 41% and consist of an aqueous mixture of the Isopropylamine (IPA) salt of glyphosate, a surfactant. The mechanism of toxicity is poorly understood but is mainly due to the surfactant causing uncoupling of mitochondrial oxidative phosphorylation [2]. Ingestion of small amounts of diluted preparations are associated with only mild gastrointestinal (GI) upset, but larger volumes can cause a wide array of complications.

In 1724 Hermann Boerhaave described the first documented case of spontaneous oesophageal rupture. The syndrome bearing his name is caused by a sudden increase in intra-oesophageal pressure with negative intrathoracic pressure. This is commonly associated with retching and vomiting, but these symptoms may be absent in up to 45% of patients [3]. With a very low incidence of 3.1 per 1 000 000 people per year [4], early recognition and management are of utmost importance as the outcome is directly proportional to the time delay between onset of rupture and management [5].

The presenting complaint is frequently excruciating retrosternal chest pain, followed by odynophagia and dyspnoea. Clinically the patient may decompensate rapidly with fever, tachypnoea, tachycardia and hypotension. Subcutaneous emphysema may result in crepitus on palpation of the chest wall, and a characteristic bubbling sound may be auscultated with every heartbeat (Hamman’s sign) [6]. Features on CXR may include pneumomediastinum, subcutaneous emphysema, pleural effusion and PTX. The diagnosis is confirmed by contrast oesophagography, with visualization of contrast extravasation [7]. Management includes cessation of oral intake, broad spectrum antibiotics, Proton Pump Inhibition (PPI) and urgent surgical referral. Surgical management includes primary repair, diversion, resection and possible esophagectomy [8] (Figure 1). 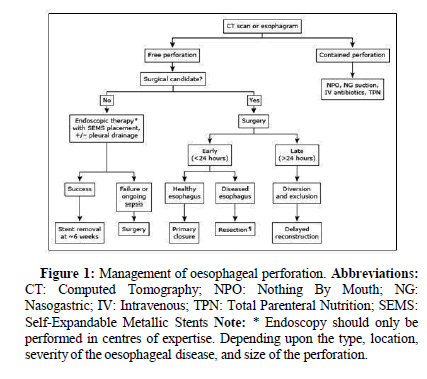 Figure 1: Management of oesophageal perforation.
Abbreviations: CT: Computed Tomography; NPO: Nothing By Mouth; NG: Nasogastric; IV: Intravenous; TPN: Total Parenteral Nutrition; SEMS: Self-Expandable Metallic Stents Note: * Endoscopy should only be performed in centres of expertise. Depending upon the type, location, severity of the oesophageal disease, and size of the perforation.

An 18-year-old male, with no significant past medical or surgical history presented to the medical emergencies department with a history of intentional ingestion of approximately 250 mL of Roundup® 5 days prior to admission. He complained of bright red haematemesis with severe epigastric and retrosternal chest pain, associated with shortness of breath. He was found to be tachycardic, hypoxemic and tachypnoeic (Table 1). He displayed signs of scleral icterus and volume contraction but was not pale or diaphoretic.

His respiratory examination yielded decreased air entry over the left lung field, with hyperresonance on percussion. Tenderness was palpated in the right upper quadrant of his abdomen, but no liver enlargement was felt. Neurological examination was normal, with no features of a depressed level of consciousness. On mental state examination the patient appeared euthymic and apsychotic, regretful about the episode of self-harm, with no further suicidal intent.

CXR evaluation on the day of admission revealed a left PTX for which an ICD was inserted. Follow-up CXR on day 3 revealed progressive changes (Figure 2) and with the finding of a Hamman’s crunch on auscultation, a diagnosis of Boerhaave’s syndrome was postulated. The patient was started on broad-spectrum antibiotics and a PPI, after which high-flow nasal oxygen therapy was initiated to assist in oxygenation. keeping with extensive subcutaneous emphysema, bilateral pneumothoraces with ICDs in situ, pneumopericardium and air adjacent to the major branches of the aorta, in keeping with thetubular artery sign (red arrow). 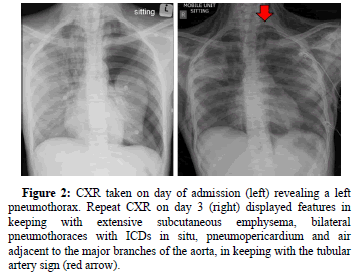 Figure 2: CXR taken on day of admission (left) revealing a left pneumothorax. Repeat CXR on day 3 (right) displayed features in keeping with extensive subcutaneous emphysema, bilateral pneumothoraces with ICDs in situ, pneumopericardium and air adjacent to the major branches of the aorta, in keeping with the tubular artery sign (red arrow).

Contrast enhanced CT of the chest with swallow was performed to evaluate for any oesophageal rupture. Extensive subcutaneous emphysema was found outlining the deep spaces of the neck. Bilateral pneumothoraces, pneumopericardium, tubular artery sign, ring around artery sign and double bronchial wall sign were indicative of pneumomediastinum (Figure 3 and 4). The extent of pneumomediastinum was further appreciated by signs of free intra-abdominal air and pneumorrhachis. Contrast extravasation from the anterolateral aspectof the oesophagus at the level of the T2 vertebrae was visualized, confirming the diagnosis of Boerhaave’s syndrome. 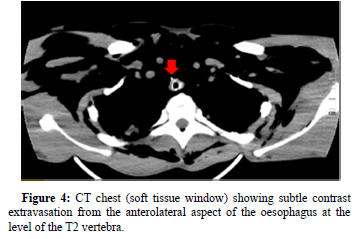 Figure 4: CT chest (soft tissue window) showing subtle contrast extravasation from the anterolateral aspect of the oesophagus at the level of the T2 vertebra.

The patient was subsequently transferred to a specialist cardiothoracic surgery facility, but subsequently demised within 72 hours due to culture-negative septicaemia.

This is a typical case of Boerhaave’s syndrome with a suggestive history, classic presenting complaints and physical findings on examination. The multi-organ involvement emphasizes the risk of glyphosate ingestion and the widespread effects thereof. Earlier instituting of treatment in this case could have prevented some of the complications, but was impossible due to the late presentation to a healthcare facility.

The importance of a CXR is clearly demonstrated in this case. Any patient with caustic ingestion is at risk of multiple complications, including the ones demonstrated in this report. The diagnostic dilemma in any non-trauma related patient with abnormal air seen on CXR is to identify the source of air. The approach to diagnosing the cause for abnormal air is dependent on multiple factors including the available resources, clinical expertise and clinical condition of the patient.

The lesson from this case is to maintain a high index of suspicion for Boerhaave’s syndrome in patients with a suggestive history as this is a relatively rare condition. Continuous clinical monitoring with timeous radiological investigation is some of the aspects of caring for such a patient. Early identification directs management strategies and prevents further organ damage.

Ethics Approval and Consent for Publication

Approval was obtained from the treating facility for publication.

Availability of Data and Material

Data was obtained from patient notes with consent from the patient.

The authors declared no conflicts of interest

No external funding was received in the writing or publication of this report.

Consent was obtained from the patient and anonymity is ensured.

Copyright: © 2021 Beyers BD, et al. This is an open-access article distributed under the terms of the Creative Commons Attribution License, which permits unrestricted use, distribution, and reproduction in any medium, provided the original author and source are credited.