Energy harvesting from the renewable sources has been the main concern in the present scenario. Till now most of the researchers focused on harvesting solar energy and wind energy. However the small amount of energy harvesting without affecting environment is very important. In the recent years mobile communication has become a part of our daily life, extracting energy from the Radio Frequency (RF) signals used everywhere is an attractive solution to the existing energy problem. Another major source of harvesting small amount of energy is from the human body heat. The energy extractions from these sources are emerging as a guaranteed alternative way to substitute the available energy resource to some extent. This paper presents a hybrid model which consists of two sections. First being the harvesting of energy from the RF signals in the range of GSM 4G band (1800-2100 MHz) using a micro-strip patch antenna followed by impedance matching circuit to reduce the dissipated power between load and antenna. Then a rectifier circuit that converts RF into DC signals is used and finally a voltage multiplier circuit is used to boost up the DC voltage. Second section consists of Thermo Electric Generator (TEG) module which converts human body heat into electricity, followed by a voltage booster to increase the level of voltage. The main objective of this work is to find a way to design a hybrid system that can harvest energy from RF signals as well as human body heat and the combined energy that is harvested can be used to power up low voltage implant device.

Environmental issues such as global warming due to emissions of greenhouse gases are causing a severe impact on the planet. Hence environmental protection is very important at this stage. The increasing rate of carbon dioxide level in the air due to burning of fossil fuels in the process of generating of energy has not only led to global warming but also exhaustion of natural resources. The reduction of natural resources has led to the concept of harvesting of energy. For an energy harvesting system, the primary need is an energy resource which is readily available, cost efficient, and sustainable irrespective of any environmental hurdles. There are multiple sources from which energy can be harvested such as light, wind, thermal, water, radio signals, vibrations etc. Solar and wind is an ambient source of energy which is available readily for no cost. Harvesting this energy needs high installation cost and more space. It can be implemented only in selected areas and that area allotted cannot be utilized for any other purposes simultaneously. Henceforth, these energy harvesting methods are not cost effective when implemented for the low power applications. But source like RF energy and human heat energy meet these needs. RF energy is ubiquitous in nature. The RF signals are used everywhere for communication purpose but not in entirety. Hence the unused RF energy can be harvested by using suitable antenna operating at a particular frequency range. Human heat energy can be harvested using TEG which generates voltage when there is a temperature difference between the opposite two sides of the module [1,2].

The basic ideology of our work is to design a hybrid energy harvesting system which extracts energy from both RF signals and human body heat. The model consists of micro strip patch antenna designed to receive the RF signals that are widely used in 4G mobile communication which operates at GSM band 1800-2400 MHZ frequencies [3]. The Impedance matching circuit is used to reduce the dissipated power between load and antenna, and then the signal undergoes rectification process using a rectifier circuit to convert RF signals into DC voltage. Secondly energy is also harvested from human body heat, by using thermoelectric generator. It is a device that converts heat into electricity or vice versa, which works on the principle of seebeck and peltier effects. The output voltage extracted from these two sources of are in the range of 50-60 mv, hence by using multistage voltage booster circuit, the voltage level is enhanced up to 2-3 volts, which can be used to energize low power applications (Figure 1) [4,5].

Rest of the paper is organized as below; Section 2 explains the design of the RF energy harvesting system. Section 3 discusses the human body heat harvesting system. In Section 4 simulation and experimentally measured results of the modules are discussed. And finally Section 5 gives the conclusion.

Micro strip patch antenna has been designed using HFSS software tool (Figure 2). Design consists of a patch of dimensions 55 x 37.8 mm, feed line of 3 x 41.67 mm and substrate having dimensions 90 x 100 mm, thickness 1.6 mm. Material used is FR4 epoxy with relative permittivity 4.4. Antenna design depends upon required operating frequency, dielectric constant of substrate material. Radiation efficiency, directivity, return loss and operating frequencies are influenced by the dimensions [7-9]. Width and length of the patch can be calculated with the following formulae as shown below; 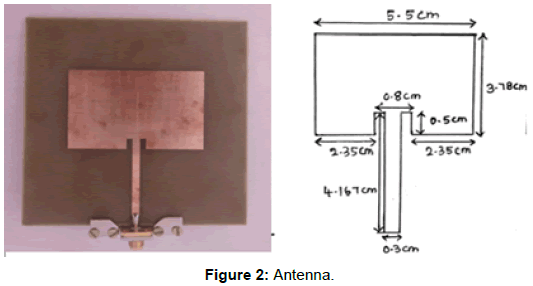 Width of the antenna is calculated by,

Length of the antenna is calculated by,

Thermoelectric Generator is a miniaturized module used to harvest heat, in our work its human body heat and this is converted into electrical energy [10-13]. The module consists of free charge carriers which move to cold end as heat flows from hot to cold. This in turn produces voltage which is directly proportional to temperature difference using Seebeck effect. TEG mainly consists of Aluminium oxide sheets and heat spreader. TE elements are alloys of n and p type bismuth telluride which are sandwiched using Aluminium oxide headers on each side. The heat spreader is connected on bottom side of the module. Polydimethylsiloxane (PDMS) is surrounding this in order to insulate and minimize heat loss when heat is transferred from spreader to TEG module. PDMS is used for wearable module because of its flexibility, durability and small thermal conductivity (Figure 4). 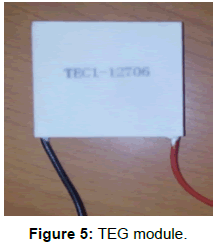 The output voltage obtained from the TEG module is very low DC voltage, which is around 25mv. Hence booster circuit is needed to enhance the output voltage. Boost converter consists of inductors, diodes and capacitors. The fundamental concept for the functioning of the voltage booster is the generation and destruction of the magnetic field in an inductor when current flows through it. This set up increases the voltage level and yields higher output voltage when a less input voltage is fed to the circuit. Figure 6 shows a schematic of a booster circuit simulated using LT spice XVII. 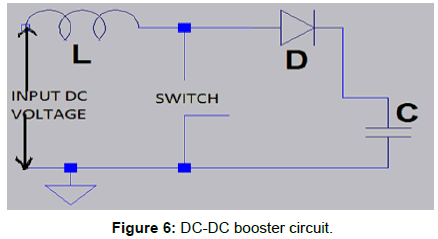 The simulated results of an antenna obtained from HFSS software is as shown in the Figure 7 below. These simulation results determine the nature of the antenna.

Return loss being -18.962 dB at a frequency of 1.85GHz. This parameter indicates how efficiently the reception of a transmitted signal takes place with minimum attenuation.

The radiation pattern graph, covering both H-plane and E-plane lobe, these lobes depict the signal strength of the antenna in different directions. The antenna designed works well in the frequency range 1.8384GHz-1.8564GHz which indicates the bandwidth is 18MHz (Figure 8). 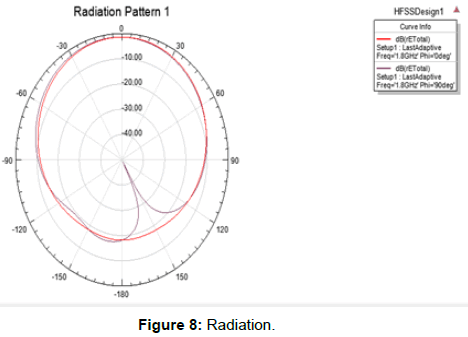 Threshold value of VSWR of an efficient working antenna is in the range 1-1.5, here we have obtain 1.25, it is a unit less parameter as it is the ratio between Vmax and Vmin (Figure 9). 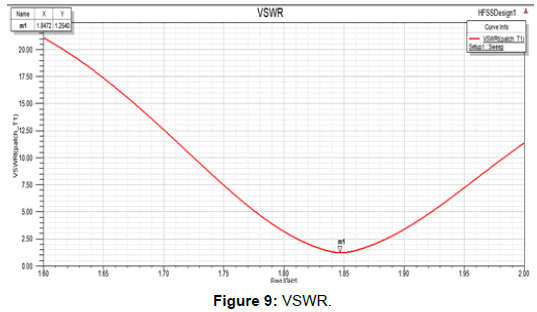 Both energy harvesting modules are tested at laboratory by considering different constraints and corresponding results are verified (Tables 1, 2 and Figures 10-12). This is a TEG setup consisting of a TEG module which is connected to a voltage booster circuit. The booster circuit is made up of inductor, capacitor and a diode. The setup is as shown above in Figure 9. This yields an output around 0.2 V.

Natural resources are in the verge of depletion making it mandatory to harvest energy from various alternative resources. Various researches have been undergone to come to a conclusion that harvesting of RF and human heat are preferred for powering low power devices. This paper concentrates on designing a hybrid model to harvest energy from two sources. A receiving antenna to harvest RF signal at 1900MHz is tested and output voltage is ascertained around 2V. Simultaneously, human heat is harvested to obtain output voltage around 1V. Both these when combined yields around 3-4V.

Copyright: © 2018 Raj KV, et al. This is an open-access article distributed under the terms of the Creative Commons Attribution License, which permits unrestricted use, distribution, and reproduction in any medium, provided the original author and source are credited.