Context: Serum monoclonal immunoglobulin (M-spike) in multiple myeloma is measured by gel electrophoresis (SPE) followed by densitometric scanning of the gel. The current standard methods delimit the M-spike component based on the projected gel image on screen (current standard method, CSM). However, the M-spike could also be selected by delimiting the peak(s) in the scanned curve (densitometry based method, DBM).

Objective: The current study will correlate the results with these two approaches and to investigate which method may yield a result more close to the actual M-spike in the serum.

The accurate quantification of monoclonal proteins (M-spike) in serum protein electrophoresis (SPE) is critical for the diagnosis of plasma cell neoplasms and monitoring of treatment of plasma cell myeloma [1-4]. The M-spike is identified using SPE and a curve representing the relative percentage of serum proteins is obtained based on densitometric scanning of the gel. The concentration of M-spike is then calculated based on the estimated percentage of M-spike and the total serum protein concentration.

However, the size of the M-spike is directly affected by the judgment of the intensity of the image projected on the screen (our internal experience and personal communication with Dr. Rita Ellerbrook, Helena Laboratories, Beaumont, TX, see Supplemental file).

Alternatively, the M-spike can also be selected by noting the sharp change in the scanned curve (densitometry based method, DBM). The latter approach is straightforward and can be done in a consistent manner by different operators (our internal experience). However, it generally results in higher M-spike estimations than those obtained with the image as a guide. The purpose of this study was to compare the results of these two approaches and to investigate which method may yield a more accurate result that is closer to the actual monoclonal protein in the serum.

This study was performed as a quality improvement project in our clinical laboratory. Forty-one consecutive SPE files from 2010-2011 with positive M-spike were retrieved from hematology laboratory of Montefiore Medical Center, Albert Einstein College of Medicine, Bronx, NY. To obtain the M-spike results, the percentage of M-spike in a sample is first determined either by delimiting the M-spike on the projected image (CSM) or based solely on sharp change in the scanned curve (DBM).

The sera were subjected to SPE and the M-spikes were measured simultaneously using both methods CSM and DBM.

The Student’s paired t-test was used to calculate the p-value for the use of CSM or DBM in measuring purified monoclonal immunoglobulin compared with that using UV spectrophotometry. Correlations were obtained through calculating Pearson correlation R value. 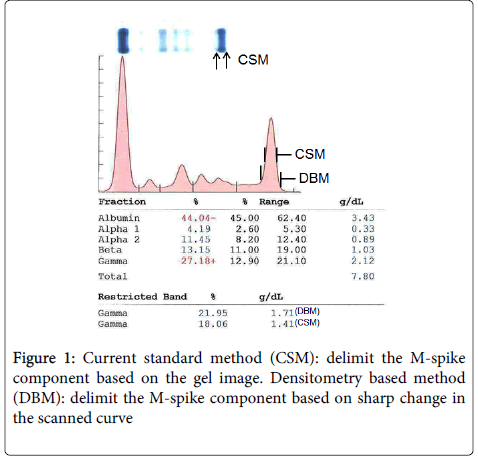 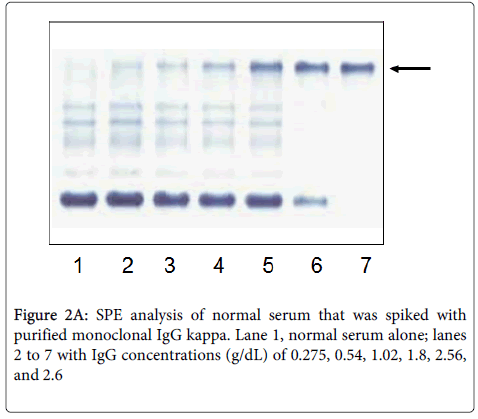 Normal serum with a known protein concentration was then spiked with the following varying percentages of this purified IgG 5, 10, 20, 40, 80 and 100 (Figure 2A, lanes 2 to 7 respectively). As shown in Figure 2B, method DBM gave a similar estimation compared to UV spectrophotometry (p=0.177), while method CSM significant underestimated IgG concentration compared to UV spectrophotometry (p=0.045). 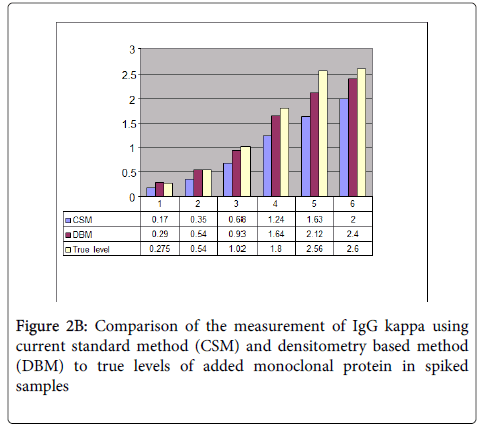 Figure 2b: Comparison of the measurement of IgG kappa using current standard method (CSM) and densitometry based method (DBM) to true levels of added monoclonal protein in spiked samples 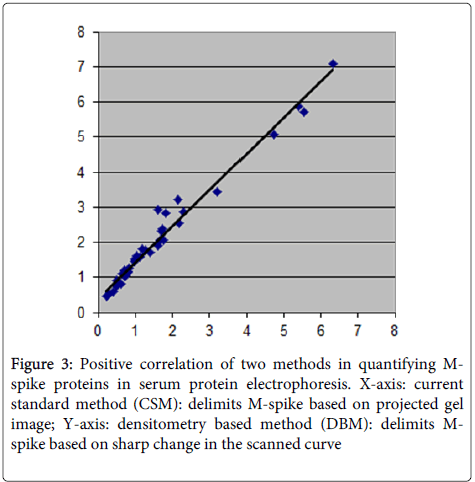 Accurate measurement of M-spike is clinically important for the diagnosis, classification and follow-up of plasma cell neoplasms. The current standard method of quantifying M-spike is based on the projected gel image. However, the size of the M-spike is directly affected by the intensity of the image projected on the screen. There is also significant variance both intra- and inter-operatively (our internal experience and personal communication with Dr. Rita Ellerbrook, Helena Laboratories, Beaumont, TX, see Supplemental file). Here we proposed a new method of measuring M-spike based on scanned curve (densitometry based method). It is more straight forward and likely to be less affected by inter-operator’s variance.

The densitometry based method gave consistently higher value compared to current standard method. By comparing with UV spectrophotometry method, DBM is also more accurate than CSM in M-spike quantification. While this is a small study and its clinical significance remains to be studied, we do suggest that laboratory standard panels consider recommending that DBM to be considered in the clinical M-spike quantification by SPE.

Copyright: © 2014 Zhang S, et al. This is an open-access article distributed under the terms of the Creative Commons Attribution License, which permits unrestricted use, distribution, and reproduction in any medium, provided the original author and source are credited.