Evolutionary game theory formally characterizes and analyzes biological systems where one’s propensity to survive and proliferate (fitness) may be dependent not only on one’s own phenotype (strategy) but also on the phenotypes displayed by all others. Applied to cancer modeling, this allows us to delineate how cell type frequencies change over time. Given the existence of a favorable long-term outcome, one may steer the tumor towards it. But if the long-term result is not beneficial, the aim switches to maximally delaying progression. Evolutionary game theory equips us with a mathematical basis to understand and design treatment regimens via the construction of cancerspecific models which naturally expose well-defined parameters that can be fitted via experiments. The fundamental idea is to exploit natural interactions within the tumor and to foresee the effects of changes in cell type frequencies. An intuitive example is the idea of maintaining a treatment-sensitive cell type at maximal frequency in order to inhibit proliferation of resistant cells due to competition for resources and space. One class of such models uses fitnessgenerating functions which allow us to track both density and frequency-dependent selection within tumors. Allowing EGT models to inspire novel therapies holds the premise to increase time to progression and to reduce cumulative drug dose. This approach is particularly promising, because modern oncological diagnosis methods have the potential to calibrate several EGT models.

Evolutionary Game Theory (EGT) [1,2] mathematically represents and analyzes biological interactions between individuals where one’s fitness not only depends on personal traits, but also on the traits of all others. However, entities do not rationally select strategies, but inherit them.

An EGT analysis is concerned with the dynamics of the number of representatives in different classes, i.e., cell types. In tumors, we try to predict cell type frequency trajectories given well-defined interaction mechanics [3].

In this short commentary, I illustrate the key take-away messages of Wölfl et al. [4] regarding the application of EGT to cancer treatment in particular with respect to emerging resistance [5] (Figure 1). Figure 1: This schematic displays the difference between (A) naive MTD therapy and (B) an EGT-inspired therapy where drug holidays rescue sensitive cells. The gist is not to liberate resistant cells from negative interactions (competitive release) with other cell types, e.g., sensitive cells, provided the burden on the patient allows.

According to evolutionary principles, the resistance phenotype maximizing cancer cell fitness given a certain treatment is pursued, i.e., the Evolutionary Stable Strategy (ESS). The tumor either reaches an eco-evolutionary equilibrium where the number of cells of each cell type balances (ecological equilibrium) given the ESS phenotype is realized (evolutionary equilibrium), or grows without bounds. In either case, there will be a threshold tumor volume at which the patient experiences significant burden and a threshold beyond which the patient deceases (Figure 2). 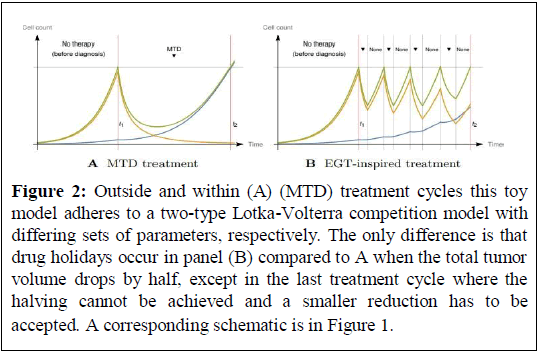 Figure 2: Outside and within (A) (MTD) treatment cycles this toy model adheres to a two-type Lotka-Volterra competition model with differing sets of parameters, respectively. The only difference is that drug holidays occur in panel (B) compared to A when the total tumor volume drops by half, except in the last treatment cycle where the halving cannot be achieved and a smaller reduction has to be accepted. A corresponding schematic is in Figure 1.

For example, let our only treatment option be a hormone deprivation therapy: While resistant cells auto-generate this hormone and release parts of it, the sensitive cells are dependent on it and can freeload under therapy.

A naive clinical approach is to treat at Maximum Tolerated Dose (MTD) such that sensitive cells are eradicated (competitive release) while resistant cells amplify yielding rapid progression (Figures 1A and 2A).

This may be worse than a more moderate application which maintains sensitive cells such that overall tumor volume does not put too much burden on the patient (Figures 1B and 2B). Importantly the latter increases both, Time to Progression (TTP) and cumulative drug dose which significantly increases quality of life for the patient.

For example, Zhang, et al. [7] developed such treatment regime based on EGT which is slightly more complex and succeeded in the clinics. They modeled metastatic castration resistant prostate cancer composed out of three competing cell types: Androgen-dependent, androgen-producing (auto-production via CYP17A to fulfill their dependency) and androgen-independent.

Contrary, their treatment protocol with drug holidays (Figure 2B) using readily measurable Prostate-Specific Antigen (PSA) as a proxy for tumor volume can maintain treatment-sensitive cells yielding equivalent or longer TTP compared to SoC under any initial condition in their corresponding clinical trial (NCT02415621).

Generally, EGT models of cancer consider either complete ecoevolutionary dynamics [9] or replicator dynamics. In replicator dynamics the trait value does not evolve (solely ecological dynamics) and intra as well as inter cell type interactions are distilled into a fitness matrix [10] which can be estimated via game assays [11], and transformed into a competition matrix within the Lotka-Volterra model framework that allows for changes in absolute population sizes (eco- evolutionary dynamics) [7]. On top of that, treatment spaces have been expanded to multiple drugs [12].

Importantly, one has to also consider that intra-tumor heterogeneity creates local-only interactions where the assumption of a well-mixed system fails.

While some EGT models consider an a priori fixed treatment regime, others allow the physician to truly enter the game as a rational leader contesting the cancer cells (followers) in order to optimize the quality of life function of the patient.

This creates a Stackelberg Evolutionary Game (SEG) [5] where the optimal leader anticipates the eco-evolutionary dynamics and steers the tumor safely through the quality of life landscape. For clarification, I will invoke a fish-in-a-pond metaphor Figures 3 and 4 loosely inspired by Salvioli et al. [17,18] : Imagine a pond with fish of varying body sizes at sexual maturity and high body size provides benefits. Figure 3: Analogous to Figure 1 (A) the fish-in-a-pond methapor contrasts a naive MTD which is often SoC versus EGTinspired treatment. (B) A quality function provides an estimation of the goodness of the game state t he from leader’s perspective (e.g., pond manager or physician). In the oncology setting, this would be the quality of life function of the patient. 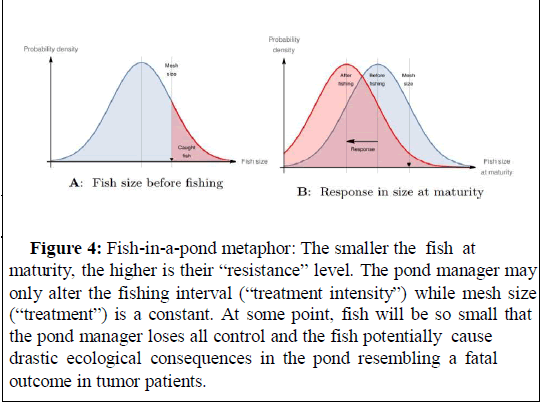 Figure 4: Fish-in-a-pond metaphor: The smaller the fish at maturity, the higher is their “resistance” level. The pond manager may only alter the fishing interval (“treatment intensity”) while mesh size (“treatment”) is a constant. At some point, fish will be so small that the pond manager loses all control and the fish potentially cause drastic ecological consequences in the pond resembling a fatal outcome in tumor patients.

The pond manager uses a fishnet of certain mesh size to cull the population regularly, because the fish are a pest. Thereby, selection for earlier sexual maturity occurs. Fish below mesh size are the analog of resistant cancer cells.

The EGT-inspired pond manager would either steer the fish into a possible eco-evolutionary equilibrium with minimal population size or else try to maximally delay growth if the prior option is not feasible (Figure 4).

To conclude, EGT often advocates to “Treat to contain”, however there is also evidence for favorable eco-evolutionary attractors. Intuitive examples showcase that EGT is useful in order to improve cancer patients’ quality of life. Given ongoing collaboration between empirical and theoretical scientists many more useful EGT-models are expected for oncology in the near future.

Copyright: © 2021 Wölfl B. This is an open-access article distributed under the terms of the Creative Commons Attribution License, which permits unrestricted use, distribution, and reproduction in any medium, provided the original author and source are credited.