Interference Effects of Excess Lithium on the Emission Signal of the Calcium and Strontium Ionic Lines during Inductively Coupled Plasma Emission Spectrometry: Simulation in Terms of the Simplified Collisional Radiative Recombination Rate Model

Interference Effects of Excess Lithium on the Emission Signal of the Calcium and Strontium Ionic Lines during Inductively Coupled Plasma Emission Spectrometry: Simulation in Terms of the Simplified Collisional Radiative Recombination Rate Model

Copyright: © 2014 Zaranyika MF, et al. This is an open-access article distributed under the terms of the Creative Commons Attribution License, which permits unrestricted use, distribution, and reproduction in any medium, provided the original author and source are credited.

ICP-AES Ca and Sr ion line signals were measured on 0-30 μg/mL Ca and Sr solutions, in the absence and presence of 1000 μg/mL Li as easily ionizable interferent, and the effect of the interferent on analyte calibration curve simulated using a simplified collisional radiative recombination rate model. Close agreement between experiment and theory was obtained for the full range of concentrations studied in the case of SrII, while the theoretical Ca ion line calibration curve exhibited close agreement below 10 μg/mL Ca concentration in the test solution, and a positive deviation of up to 18% from the experimental curve at higher Ca concentrations. The data obtained successfully demonstrates the potential of the simplified collisional radiative recombination rate model for simulating the effects of easily ionizable interferents on high ionization potential analytes.

The enhancement of emission lines from the analyte during inductively coupled plasma atomic spectrometry as a result of matrix effects has been reported by several workers [1-6]. A major objective of plasma diagnostics is to be able to predict or simulate the effects of interferents on analyte signal during such atomic spectrometric measurements. Recently we showed that the interference effects of easily ionizable elements, EIEs, on analyte absorbance or emission signal is given by Equation 1 [7-9]

Where n denotes number density, the subscripts u and o denote analyte excited state and ground state respectively, the subscript e denotes electron, Ea denotes electron activation energy, the prime denotes quantities measured in the presence of the interferent, Δne denotes the change in the electron number density upon the introduction of the interferent, k is the Boltzmann constant and T is the absolute temperature.

the absolute temperature. It can be shown on the basis of the Boltzmann population distribution law for bound states that [9,10]:

where I and A denote emission and absorbance signal intensity respectively, and the prime denotes quantities measured in the presence of the interferent as before. Substitution into Equation 1 leads to Equations 3 and 4 which can be used to predict or simulate the effects of EIE interferents on analyte calibration curve during atomic absorption and emission spectrometry respectively:

Equation 1 assumes that the effects of interferents on analyte signal arise from analyte ion – electron collisional radiative recombination [7-9,11]. Current theory of atomic spectrometry assumes local thermal equilibrium (LTE), which in turn assumes that, upon ionization, electrons are ejected with kinetic energy equal to the ionization potential of the parent atom or ion, but quickly loose this energy through thermal collisions so that at thermal equilibrium all the electrons will have kinetic energy equal to kTe, whereTe is the electron temperature corresponding to LTE conditions. Zaranyika and co-workers have shown that under the conditions of LTE, ΔEa in Equations 1, 3 and 4 is equal to zero. Experimentally ΔEa has been shown to be non-zero [7-9,11], and that during air-acetylene flame and ICP atomic spectrometry analyte ion – electron collisions occur from the ambipolar diffusion state or the LTE state, so that ΔEa is given by Equations 5 and 6 respectively:

A Unicam 701-Emission Inductively Coupled Argon Plasma Echelle Spectrophotometer with “crossed” dispersion was used. The spectrophotometer was fitted with an aperture plate of 90 mm by 1.5 nm slits etched at 2 mm intervals, a photomultiplier tube (PMT) detector mounted on a movable frame for radial view of the ICP, a torch with three concentric tubes for outer gas, auxiliary gas and sample transport, a 40.68 MHz R.F. generator which supplies power up to 2 kW, a grid type nebulizer fitted with Pt screens and Pt orifice, a 5-channel computer controlled peristaltic pump, and an automatic Ar gas flow rate optimizer.

The argon (99.95%) was supplied from a pressurised tank (BOC GAS Ltd, Zimbabwe): The outer gas was supplied at 14 L min-1, power 1.0 kW, nebulizer pressure 40 psi (280 kPa) and auxiliary gas at 1 L min-1. Under these conditions the plasma temperature is between 7000 and 9000 K [13]. The optimum zone for analysis was established using the strong emission line of Mn, and the maximum temperature of 9000 K was used in the calculations for maximum effect of the interferent. CaII and SrII line emission signals were recorded at 393.3 and 407.8 nm respectively.

The experimental procedure was described previously [7,8]. Two sets of standard solutions containing 0 to 30.0 mg/L analyte (Sr or Ca) were prepared from freshly prepared solutions of their chloride salts. One set was spiked with 1000 mg/L of LiCl as EIE interferent. The other set was left unspiked. The experiment was designed such that the interferent concentration was kept constant at a very high level (1000 mg/L) relative to that of the analyte, whilst the analyte concentration was varied. In this way changes in the physical properties of the test solution upon the introduction of the interferent could be minimized, and be compensated for by taking blank readings of a solution containing the interferent salt only. Preliminary experiments were run to determine the aspiration rate and the nebulization efficiency for the type of solutions under analysis [10,14,15]. Mean values obtained for the aspiration rate and nebulization efficiency were 1.00 ± 0.04 L/min and 5.0 ± 0.7% (n = 8) respectively

Analyte line emission signals, I and I’ where the prime denotes presence of the interferent, were read in triplicate. Typical I and I’ results obtained are shown in Table 1. The values of I’ for Ca were corrected for the contribution from contamination from the interferent, and plotted as a function of analyte concentration in the test solution in Figure 1.

Table 3: ΔEa values and u n n′ n equations for CaII and SrII in the ICP.

Assuming Equation 4 holds, then the emission signals in the presence of the interferent for the CaII/Li and SrII/Li analyte/interferent systems are given Equations 8 and 9 respectively: 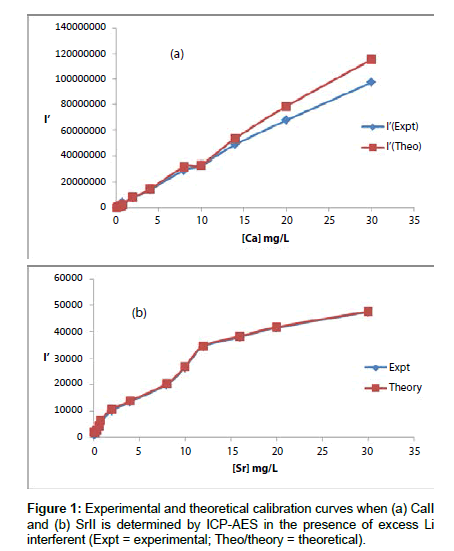 Figure 1: Experimental and theoretical calibration curves when (a) CaII and (b) SrII is determined by ICP-AES in the presence of excess Li interferent (Expt = experimental; Theo/theory = theoretical).

From the foregoing discussion we conclude that interference effects due to easily ionizable elements on analyte line emission signal during ICP-AES can be simulated successfully using the simplified rate model based on collisional radiative recombination as the major collisional process leading to the observed interference effects. Although the work presented in this paper is rather limited in scope, the remarkable success of the model in predicting the interference of excess Li on the emission signal of SrII, confirms the potential of the model in simulating analyte emission signal enhancement interference effects during ICP-AES. The results presented constitute further confirmation that the ICP is not in LTE, and suggest that electrons from the ionization of easily ionizable elements exist primarily in the LTE state, while those from the high ionization potential analytes and Ar exist primarily in the ambipolar diffusion state.

Financial support for this work was provided by a grant from the Research Board of the University of Zimbabwe (UZ). The assistance of the Director and staff of the Institute of Mining Engineering, UZ, and the management and staff of Bindura Nickel Corporation, Bindura, Zimbabwe, in availing us the use of their ICP equipment is gratefully acknowledged.