Is Periodontitis and Rheumatoid Arthritis Inter-Related?

Is Periodontitis and Rheumatoid Arthritis Inter-Related?

There is a growing awareness of the link between periodontal and systemic inflammatory conditions, such as RA. Inflammation plays a key role in the origin of RA, its chronification, and in a progression of the disease with soft and hard tissue destruction, in a way similar to the situation seen in patients with chronic periodontitis.

While the existing level of evidence is low, the association may be reflective of common underlying dysregulation of an inflammatory response in these individuals, and it seems that a decrease in periodontal inflammation in some way influences the level of systemic inflammation, and appears to contribute to the clinical improvement of the disease.

Periodontal disease is a multifactorial, complex disease where there is an interplay of host- tissue response and bacterial infection. Any shift of the equilibrium towards the latter, causes periodontal tissue destruction and is characterized by loss of connective tissue attachment. Periodontal disease are not only a threat to dentition, but may also be a threat to general heath. There are reports suggesting increased prevalence of diabetes, atherosclerosis, myocardial infarction, stroke and rheumatic arthritis (RA) in patients with periodontal disease [1,2] There is a growing awareness of the link between periodontal and systemic inflammatory conditions, such as RA and coronary artery disease based on common etiopathogenic mechanisms [2-5] All forms of inflammatory periodontal diseases are associated with chronic inflammation , resulting in the destruction of periodontal ligament and bone [5]. In addition to other chronic condition of altered connective tissue metabolism ,hormone imbalance and altered immune function have likewise been associated with increased risk of periodontal disease [6].

Rheumatoid arthritis is an autoimmune disease characterized by chronic inflammation of the joints, particularly the small joints of the hands and feet, with progressive destruction resulting in variable degrees of deformity and functional disability. Inflammation plays a key role in the origin of RA, its chronification, and in progression of the disease with soft and hard tissue destruction, in a way similar to the situation seen in patients with chronic periodontitis [7].

A number of hypotheses have tried to explain the relationship between PD and RA. The currently most widely accepted hypothesis is the “double hit model”, which postulates that a first “hit” in the form of inflammation due to periodontitis is followed by a second “hit” at joint level, with an exacerbation of the inflammatory response in these locations. Another hypothesis points to the development of an autoimmune response generated by proteins partially altered by enzymes of bacterial origin, such as anti-citrullinated protein antibodies in RA [8-10].

Periodontitis and rheumatoid arthritis (RA) are both chronic inflammatory diseases & share numerous features including tissue and bone destruction; production of inflammatory mediators including cytokines, prostaglandins and degradation enzymes (i.e. MMPs) and common risk factors such as smoking [11,12]. The destruction of soft and hard tissue is a result of a large number of signal molecules released by inflammatory cells in the synovia/gingiva which contribute, directly or indirectly, to the degradation of tissue and bone [13-15]. Both diseases have similar cytokine profiles characterized by high levels of inflammatory mediators (such as PGE2, TNF-, IL-6 and IL-1β) and degradation enzymes (e.g. MMP1, MMP9 and MMP13), and decreased levels of anti-inflammatory mediators (such as IL-10 and TGF-β) [15-20] In addition, a well-established major risk factor for both periodontitis and RA is cigarette smoking. Higher frequency of bone loss, attachment loss and edentulism is exhibited in smokers, compared with non-smokers. Moreover, a well-established genetic risk factor for RA, HLA-DRB1 SE alleles, has also been implicated as a risk factor for periodontitis [21-23]. Additionally, antibodies associated with RA (both ACPA and RF) have been detected in non-RA patients with periodontitis [12]. For example, individuals with periodontitis have higher serum ACPA-levels compared to healthy controls. Furthermore, increased levels of citrullinated proteins have been reported in inflamed periodontal tissue, and expression of ACPAs has been demonstrated in gingival crevicular fluid (GCF) and saliva of patients with RA [24,25]. Similarly, RF has been reported in gingiva, subgingival plaques and in serum of patients with periodontitis [12].

In 2004, a hypothesis of a possible pathogenic connection between periodontitis and RA was proposed, implicating the involvement of the periodontal pathogen P. gingivalis in the pathogenesis of RA, through the process of citrullination. Citrullination is an enzyme-mediated post-translational modification of the amino acid arginine in a protein into the non-standard amino acid citrulline (Figure 1). 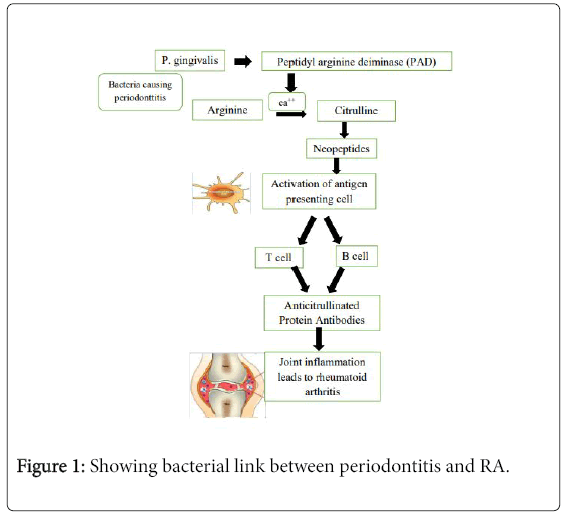 Laboratory Tests In Common Between Rheumatoid Arthritis And Periodontitis [27]

There is no single test that can assess and predict the status of RA and periodontal disease. However, the combination of clinical and laboratory markers give more meaningful measures of disease activity and severity than a single test. Laboratory markers such as levels of rheumatoid factors, prostaglandins, collagen degradation products and C- reactive protein are altered in inflammatory conditions such as periodontitis and RA. Accordingly, a multitude of factors including clinical parameters, immunopathology and microbiology should be considered in order to reach an acceptable diagnosis and predictive ability for both RA and periodontal disease.

Regarding the possible relationship between periodontal treatment and disease activity, it has been suggested that the control of periodontal disease could contribute to lessen infection and periodontal inflammation by adopting preventive measures with good oral hygiene, supragingival and subgingival scaling and root planing. These measures could reduce the clinical activity of RA, with a decrease in the serum levels of certain products derived from the inflammatory process [28] Systematic review indicates that the application of conservative treatments clearly improves the periodontal parameters (bleeding upon probing, pocket depth and attachment loss) in patients with RA and chronic periodontal disease [29] Furthermore, this periodontal improvement was seen to be associated to beneficial effects in relation to other disease assessment parameters such as the DAS28 score and ESR [28-30]. In this regard, ESR decreased significantly – suggesting a reduction in systemic inflammation following nonsurgical periodontal treatment. The DAS 28 score showed a tendency towards lessened signs and symptoms of disease, with a decrease in the number of painful joints, and lesser morning stiffness and joint effusion, independently of the drugs used to treat RA.

Although Pinho et al. [31] found the difference between the studied groups to be significant at three months of follow up, significance was lost after 6 months. The follow up period in the different studies ranged from 6 weeks to 6 months, and might be too short to detect clinical changes referred to periodontal infection and inflammation.

While the existing level of evidence is low, the association may be reflective of common underlying disregulation of inflammatory response in these individuals, and it seems that a decrease in periodontal inflammation in some way influences the level of systemic inflammation, and appears to contribute to clinical improvement of the disease.

However, further randomized controlled clinical trials including a larger number of patients, with appropriate blinding and longer periods of follow-up are necessary to confirm this finding.

Copyright: © 2018 Indurkar MS, et al. This is an open-access article distributed under the terms of the Creative Commons Attribution License, which permits unrestricted use, distribution, and reproduction in any medium, provided the original author and source are credited.