The aim of our study is to determine the most suitable system for the better dose distribution of the brachytherapy treatment of cervix cancer by the Cesium-137, and recommended for use in Algeria anti-cancer centers. It is mainly concentrated on clinical and dosimetrical aspects in brachytherapy treatment of cervix cancer, through notably, the doses distribution while using, the Manchester method (prescription at the A point) and the method recommended by the ICRU 38 (International Commission one Radiation Units and measurements, Report N°38) that give the prescription of the dose in terms of treated volume. We used these methods of doses prescription, for the choice of the reference isodose, and also to estimate received doses in organs at risk. The gotten results show that both methods have significant differences in the choice of the reference isodose three centers. However, the method recommended by the ICRU-38 is best approximate to the clinical reality for the choice of the reference isodose. Both methods show that received doses in organs at risk are within tolerance. Despite this, the radiation therapist role for this type of treatment is still important.

In this study, we focus on the clinical and dosimetric aspects in the treatment of cancer of the cervix by brachytherapy, particularly through the dose distribution using the Manchester (prescription point A) and the method recommended by the ICRU-38 (International Commission on Radiation Units and measurements, Report No. 38) which advocates the dose prescription in terms of volumes to be processed. We used these methods for the choice of the reference isodose, also to estimate the dose at organs at risk. The results show differences between these dosimetrics methods. However, the method recommended by the ICRU-38 seems more realistic for the choice of the reference isodose [1-5]. By cons, to protect organs particularly monitored namely the bladder and rectum, the ICRU-38 recommendations’ and Manchester system shows that doses are significant but still below the tolerance dose [6].

Manchester System (Paterson-Parker 1948) specifies the dose at two points called: Manchester point A and B (Figure 1), it also evaluates the dose to organs at risk points precisely the bladder and rectum [6]. 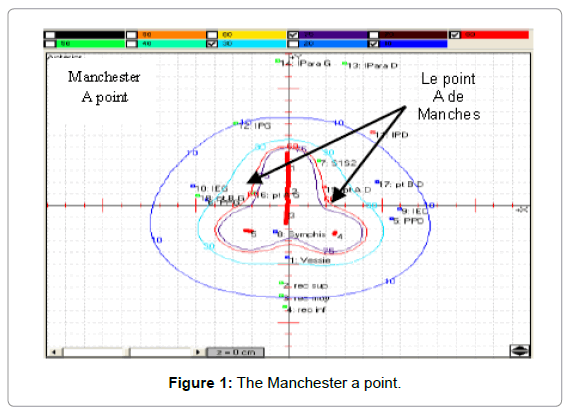 Figure 1: The Manchester a point.

The ICRU-38 report, recommended for the description of the dose distribution according to the dimensions of the treated volume (in front dw and dh (Figure 2) and dt in profile (Figure 2), and the dose at points of critical organs (bladder, rectum, pelvic wall and lymphatic trapezoid Fletcher) [1-5].

Our results (Figure 3) show that the reference isodose calculated on the basis of the recommendations of the ICRU 38 and the three centers are higher than those recommended by the application of the system in Manchester [7-10]. In other dosiemetric terms, we asserted that the best prescription is based on the ICRU-38 due to the inclusion of volumes, while the Manchester system based on the prescription point A shows a under dosing a large part of the tumor volume and this, notwithstanding the fact that at the clinical level, we do not have hindsight to detect a biological effect.

Figure 3: Comparaison of the two dosimetric methods for the three centers.

Dose to organs at risk

Our results (Figure 3) show for the organs carefully monitored namely the bladder and rectum, the doses are significant but still below the tolerance dose (70 Gray), except for the rectal dose in the center C due to lack of rectal probe.

Our results (Figure 3) of doses to specific points of the right and left pelvic wall and lymphatic trapezoid Fletcher show that the values are around (10 Gray). Dosimetrical, this is consistent with the literature, but it is important to have such assessment which actually allows estimating the dose to add possibly by radiotherapy if the radiotherapist finds a balance shown by the review of pathology after surgery.

Both methods show that received doses to organs at risk are within tolerance.Despite this, the role of the radiation therapist for this type of treatment is still important.

I express my sincere thanks and deep gratitude to all members of the three radiotherapy centers for has agreed to guide my work and have made me the pleasure of enjoying for their experience and their skills.

Copyright: © 2017 Mostafa L, et al. This is an open-access article distributed under the terms of the Creative Commons Attribution License, which permits unrestricted use, distribution, and reproduction in any medium, provided the original author and source are credited.