Copyright: © 2015 Arkun K et al. This is an open-access article distributed under the terms of the Creative Commons Attribution License, which permits unrestricted use, distribution, and reproduction in any medium, provided the original author and source are credited.

Objective: Our objective was to evaluate mitochondrial DNA (mtDNA) gene copy numbers in substantia nigra neurons from post-mortem Parkinson’s Disease cases and determine if the presence of Lewy bodies (LBs) altered mtDNA copy numbers or changed apparent deletion of mtDNAs. Methods: We used laser capture micro dissection to isolate neuromelanin-containing cells with or without Lewy bodies from 6 Parkinson’s Disease cases. Anti-alpha-synuclein immunohistochemistry was used to identify Lewy bodies in flash frozen tissue. Cells were collected in triplicate groups of 15 cells (LB (+) or LB (-)) from each case, and DNA was extracted with proteinase K-containing buffer. mtDNA copy number was determined by quantitative PCR for 4 genes distributed around the mitochondrial genome (12S rRNA; ND2; CO3; ND4) and normalized to a copy number standard curve of human mtDNA run on the same plate. Results: We found an average ~4-fold higher mtDNA copy numbers in LB (+) neurons compared to LB (-) neurons from the same cases, but we observed substantial heterogeneity. ND4 appeared to be deleted in all cases. ND2 appeared to be deleted in one case as was CO3 in two cases. Conclusion: Our studies indicate that in most cases of synucleinopathy, LB presence does not reduce, and appears to increase, mtDNA copy numbers in PD nigral neuromelanin-containing neurons.

Parkinson disease (PD) is the most common neurodegenerative movement disorder. Braak, et al showed that PD is a brain-wide disease that in many cases appears pathologically as α-synuclein positive neurites in GI enteric neurons, then spreads into olfactory and spinal sympathetic neurons before appearing in caudal brainstem (dorsal motor vagal nucleus) [1]. Later involvement of substantia nigra (SN) and dopamine neuron death (Braak stage 3-4/6) produces the stereotypical, dopamine-responsive movement disorder. By this time α-synuclein pathology is found in and continues to expand into rostral limbic and cortical areas, producing neuropsychiatric symptoms so disabling to many PD sufferers.

As we age dopaminergic neurons develop Lewy bodies (LBs), which are inclusions containing many proteins, including α-synuclein. Mitochondrial dysfunction has also been characterized in PD [2-9].Mitochondria have multiple copies of their own closed circular DNA (mtDNA) that encodes key proteins involved in respiration. Increasing levels of deleted mitochondrial DNA (mtDNA) in SN neurons were found with aging and at even higher levels in patients with PD [10]. Deleted mtDNA leads to impaired mitochondrial function if deletions exceed a certain threshold [10]. We tested the hypothesis that dopaminergic neurons with LBs represent impaired neurons and would be associated with reduced mtDNA copy numbers indicating more mitochondrial dysfunction than dopaminergic neurons from the same cases without LBs.

Fresh Frozen tissue, immunohistochemistry and capturing nigral cells with and without Lewy bodies

Ten micron section of flash/fresh frozen midbrain tissue from six cases were cut on a cryostat, fixed in 70% ethanol, hydrated and stained for α-synuclein with anti-α-synuclein (Life Technologies, 1:100) followed by anti-mouse-alkaline phosphatase and vector red substrate according to the manufacturer’s recommendations (Vector Labs). Cells were identified by the presence of neuromelanin and the presence or absence of α-synuclein (red intracytoplasmic staining, Figure 1).Laser capture microdissection (LCM, Arcturus XT system) was used to collect 15 neurons with Lewy body inclusions and adjacent neurons without inclusions with agreement of two operators (KA and AR).From each case we collected 15 nigral neurons staining red by immunohistochemistry (Lewy body positive, LB (+) neurons) and 15 neurons without staining (no Lewy bodies, LB(-)) in triplicate (45 of each type of cell). From preliminary data we determined the need to capture 15 cells per cap to get reproducible cell capturing and sufficient DNA for qPCR analyses. Figure 1: Representative images of captured nigral neurons with and without LB’s. Fig. 1A shows a cell without LBs. Fig. 1B shows cells with LBs.

Caps were extracted overnight at 65oC with a proteinase K/tris buffer. Following extraction, the proteinase K was heat inactivated and the samples were diluted to 200μl. Multiplex quantitative PCR (qPCR) was run comparing to a standard curve of known amounts of mtDNA for 4 different genes around the mtDNA genome (ND2, ND4, COX III and 12S rRNA) as done previously by our group [11-15]. Primers were designed using Beacon Designer software. Quantitative PCR was performed in a BioRad CFX96 instrument using BioRadqPCR reagents following the manufacturer’s recommendations.

A Two-way ANOVA test was used for comparing LB (+) and LB (-) cells for each gene and for analysis with normalization to relative ND2 gene levels for each case. We analyzed CO3/ND2 ratio and ND4/ND2 ratio in cells with and without Lewy bodies for each case to estimate mtDNA gene deletion abundance for CO3 and ND4.

In all six cases from persons who died after prolonged histories of PD (Table 1), the LB-containing neurons (Figure 1) had an average 4 times higher mtDNA copy number compared to nigral neurons without LB’s (Figure 2; Table 2,3).We observed substantial heterogeneity among our samples, with two cases showing LB (+)/LB (-) ratios slightly <1 for all mtDNA genes (Figure 2B). In addition, we found evidence suggesting gene deletions, in which similar levels of deletions were detected in both LB (+) and LB (-) neurons. ND4 deletion appeared to be present in all cases; CO3 also appeared to be deleted in two cases (#7 and 8) (Figure 3). 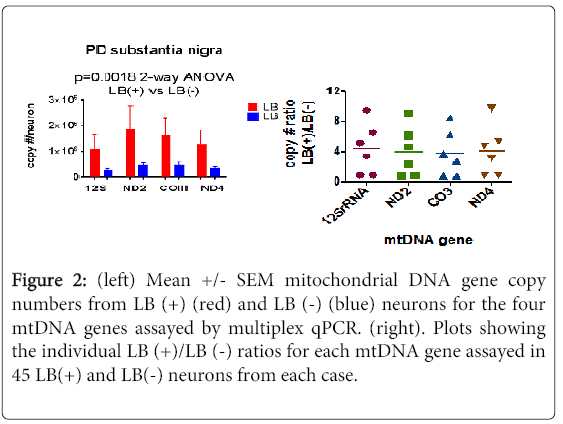 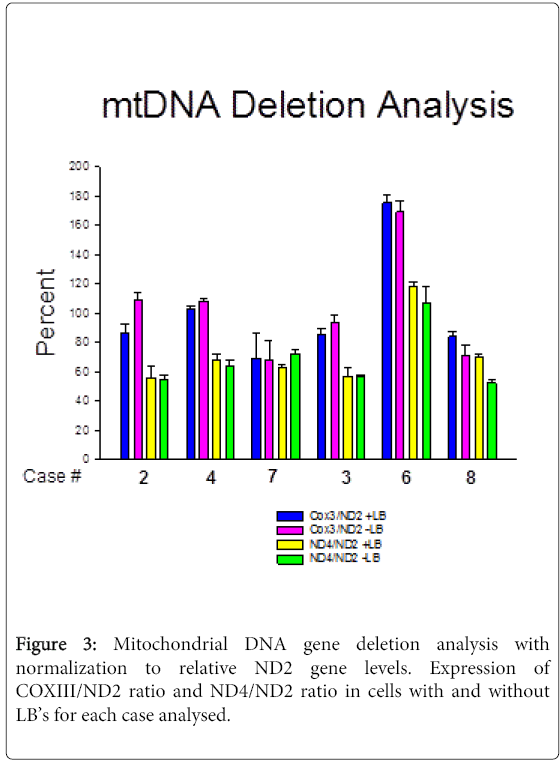 Figure 3: Mitochondrial DNA gene deletion analysis with normalization to relative ND2 gene levels. Expression of COXIII/ND2 ratio and ND4/ND2 ratio in cells with and without LB’s for each case analysed. 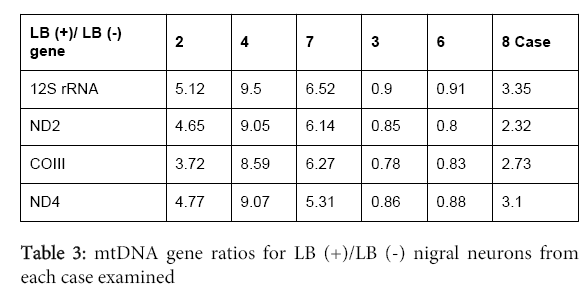 As we age dopaminergic neurons may develop Lewy bodies, which are inclusions containing the protein α-synuclein. The redundant formation of Lewy bodies and Lewyneurites with premature neuronal loss are hallmarks of PD. The Lewy bodies are single or multiple round, pink (eosinophilic) intracytoplasmic neuronal inclusions with a paler halo around them on hematoxylin and eosin stain. The role of Lewy bodies in the pathogenesis of PD is still not clear.

We hypothesized that the presence of Lewy bodies would indicate nigral neurons with reduced bioenergetic capacity. Mitochondrial involvement and dysfunction are known to play roles in Lewy body pathology and neurodegeneration: high levels of deleted mtDNA in SN neurons was reported in the elderly and in patients with PD[10,16] along with alterations in genes encoding proteins that regulate mitochondrial function, such as mitochondrial autophagy and protection against oxidative stress [17,18].

We found substantial heterogeneity among the cases in terms of the ratios of mtDNA genes in LB (+) compared to LB (-) nigral neurons. The two cases where LB (+)/LB (-) ratios were slightly <1 both came from persons with long-standing, clinical PD histories and diffuse neocortical patterns of LB presence at autopsy. Thus, the effects of LBs on mtDNA gene copy numbers appear to be heterogeneous across cases, mitigating against any kind of shared mechanism(s).

All of our cases had qPCR evidence of deletions in ND4, which is part of the recognized 5Kb “common” deletion. The deletions were present in nigral neurons with and without Lewy bodies, suggesting either that the deletion occurred early in the differentiation of these cell types or that some mechanism induced a similar deletion in different cells of the same individual. CO3 appeared to be deleted in two cases (Figure 3). These types of deletions have been described previously in PD. It has been also reported that significant accumulation (of more than 60%) mtDNA deletions can lead to neuronal loss [19]. At the same time our data demonstrate a significant accumulation of deletions without causing apparent cell death, which could possibly be due to an activation of repair or compensatory mechanisms. For example, in animal studies accumulation of mtDNA correlated with increased levels of OPA1, which is neuroprotective and can prevent pro-apoptotic remodeling of mitochondria [20]. So it is possible that accumulation of mtDNA deletions can trigger neuroptotective mechanisms.

Our studies are in contrast to those of Müller, et al., who used laser capture microdissection to isolate single LB (+) and LB (-) cells from the same cases, but did not detect significant differences in mtDNA copy numbers [5]. Differences in the techniques used could have contributed to the differences between our results and their’s. We used a different laser capture system than they used and determined from preliminary data of numbers of cells/cap that we needed to capture 15 cells/cap to obtain a linear increase in mtDNA copy number with increasing number of cells captured. Whereas, they isolated DNA from single cells and performed qPCR for mtDNA copy number, which could have resulted in greater variability and non-significant results. Other differences could be related to the specific samples analyzed.

As previously described the SN neurons in PD have increased mitochondrial defects and mitochondrial deletions [5,19,21,22]. Pathogenic mtDNA mutations can be point mutations or large scale deletions. However the relationship between mitochondrial dysfunction, nigral neurodegeneration and alpha synucleinopathy is unclear.

Other studies have evaluated post-mortem laser captured nigral neurons for mtDNA deletions [5,23]. One study compared laser captured single nigral neurons with and without neuro melanin [23]. Absence of neuro melanin is generally believed to be an earlier age, although these were in the same cases. In pigmented cells there were 49% deletions of mtDNA, whereas it was only 31% in non-pigmented cells. We did not sequence the mtDNA and cannot provide the percent of the mtDNA deleted in our samples, just relative presence or absence of specific genes.

In conclusion, our study indicates that in most but not all PD cases LBs do not reduce and appear to increase mtDNA copy numbers in nigral neuromelanin-containing neurons. This phenomenon was heterogenous across our PD cases, being present in four cases and not present in two cases. With qPCR assay of specific mtDNA gene copy numbers we found evidence of similar levels of ND4 deletion in LB (+) compared to LB (-) neurons in all cases, and CO3 deletion in two cases. Further studies are needed to explore how LBs can increase mtDNA copy numbers, the pathways generating these mtDNA gene deletions, as well as whether accumulation of these deletions contribute to activation of neuro protective mechanisms.