Dedifferentiated chondrosarcomas are aggressive, malignant tumors characterized by growth potential and a lytic soft tissue component. Radical resection is the recommended treatment protocol, but can be difficult depending on anatomic involvement and location of each tumor. We describe a modification of the Tikhoff-Linberg procedure for resections in the shoulder girdle, in which a scapulectomy is performed without resection of the proximal humerus, and extensive skeletal and soft tissue reconstruction is utilized to maintain adequate functional and aesthetic outcome.

Chondrosarcomas represent a wide spectrum of tumors that are characterized by cartilage generation and growth potential. These tumors can be classified as low-grade, intermediate grade, high-grade, and dedifferentiated. Dedifferentiated chondrosarcoma (DCS) is amongst the most aggressive and rare bone tumors. It constitutes approximately 10% of all chondrosarcomas, and is defined by its bimorphichistological components: A low-grade cartilage component adjacent to a lytic, high-grade component. The high-grade component has been found to dedifferentiate into other bone tumors such as osteosarcoma, fibrosarcoma, and malignant fibrous histiocytoma. DCS typically has a poor prognosis, with 5 years survival rates reported to be as low as 10% [1,2]. Considering the high risk of metastasis and the lack of response to chemotherapy, radical surgical resection of the DCS has been recommended as the mainstay of treatment [2].

We report the case of a peripheral DCS arising from a benign osteochondroma in the left scapula of a 32 years old male. The patient had a history of multiple hereditary exostoses. The most commonly involved sites for DCS in order of decreasing frequency are the pelvis, proximal femur, proximal humerus, distal femur, and ribs. The prevalence in the scapula is low, and there are few reports for surgical treatment of chondrosarcomas in this location. Due to the unique location and high histological grade of this tumor, we describe an operative technique in which were sect the scapula while maintaining elbow and hand function, modifying the Tikhoff-Linberg procedure.

A 32 years old male presented with 4 months of severe left arm pain. He described the pain as sharp and throbbing, most noticeable at night. Patient ’ s past medical history was significant for multiple hereditary exostoses. X-rays of the left scapula showed an irregular, hyperdense bony mass extending posteriorly from the inferior posterior aspect of the scapula. An MRI of the left scapula showed a 7.9 cm mass with 10 mm cartilage cap and destruction of inferior border of left scapula with associated soft tissue components. The CT scan shows a lesion emanating from inferior aspect of left scapular body exhibiting internal calcification as shown in Figure 1. The core needle biopsy showed a peripheral dedifferentiated chondrosarcoma arising in the setting of multiple hereditary osteochondroma. Tumor cells showed positive immunostains for vimentin, CD68, CD163, and focally Ki637. These findings were consistent malignant transformation to a dedifferentiated chondrosarcoma. The decision of a radical surgery was reached after extensive discussion with patient about risks, complications, and recovery. Prosthetic replacement was discussed, but would have delayed the procedure for this very aggressive tumor and offered minimal functional benefit over elected procedure. Scapular resection with humeral suspension was deemed the best option for higher chances of negative margins and adequate function. The patient was placed in the right lateral decubitus position. An axillary roll was placed, and the upper extremity was prepped and draped in a sterile manner. A utilitarian shoulder incision was used as described in Figure 2 [6]. From the lateral axillary line, the incision was extended posteriorly and inferiorly along the lateral border of the scapula, finally curving medially just distal to the tip of the scapula. Medial and lateral skin flaps were raised to expose the underlying musculature. The musculature around the scapula was released with electrocautery, starting from the latissimus dorsi at the interior tip of the scapula and extending to the trapezius muscle. Upon encountering the rhomboid muscles, a margin was sent to pathology for frozen section analysis. This analysis revealed neoplastic disease. A wider resection of the rhomboids was thus performed. The levator scapulae and omohyoidmuscles were released, and the scapula was retracted to the chest wall to release the serratus anterior followed by the teres major. The deltoid was elevated off the scapular spine and the acromion. And the trapezius was elevated off the clavicle, exposing the supraspinatus fossa and exposing the distal end of the clavicle. The surrounding soft tissues and coracoclavicular ligaments were released from the distal one-third of the clavicle. The clavicle was transected along its distal one-third, which allowed for better mobilization and visualization of the scapula. Figure 2: (A) Planned utilitarian shoulder incision. (B) The periscapular muscles have been released. The Scapula with the soft tissue component projecting posteriorly can be seen. The latissimus dorsi has been released off of the inferior scapula.

Next, the subclavian artery and vein were dissected from the surrounding soft tissues. Likewise, the brachial plexus was mobilized away from the coracoid process and neuroplasty was performed. The short head of the biceps and pectoralis minor were also released from the coracoid process. The insertion of the rotator cuff on the proximal humerus was incised, and the biceps insertion to the glenoid was transected. The inferior glenohumeral ligament and triceps along the inferior aspect of the scapula were released. This allowed for removal of the entire scapula, accomplishing a radical resection. Using a 2.5 mm drill bit, two holes were drilled into the clavicle as well as the greater tuberosity of the proximal humerus. Heavy FiberWire tapes were passed through the holes in the proximal humerus. FiberWire tape was also placed in the biceps tendon, weaving it in and out, and the tapes were passed through the clavicle. The humeral head was fastened to the clavicle, tied tightly with sutures, and the biceps tendon was also attached to the clavicle, performing a formal tenodesis.

Extensive soft tissue reconstruction was then performed. A second incision was made from the iliac crest proximally and connected with the distal aspect to the first incision. Skin flaps were raised to expose the latissimus dorsi and it was detached from the iliac crest area extending from posterior to anterior and distal to proximal until the entire latissimus dorsi was freed and rotated into the axilla. The latissimus dorsi was rotated up to fill the dead space under the deltoid muscle, between the humeral head and deltoid musculature in Figure 3. This helped to fill in the dead space where the scapula was removed and achieved a better aesthetic outcome. The latissimus was sutured in place with #1 Ethibond sutures around the perimeter to the deep surface of the trapezius muscle. The trapezius muscle was rotated over the deltoid muscle and sutured in place with several heavy sutures. The lower portion of the trapezius muscle was rotated to the lateral fascia in the axilla and chest wall, rotating the muscles over the defect to close it down to the area of the latissimus which was rotated. This was also sutured in place with #2 Ethibond sutures. Three drains were placed and brought out through separate stab incisions in the skin distal in line with the skin incision, and the skin was repaired in a complex manner using 2-0 Vicryl sutures and a 3-0 Monocryl suture. The post-operative protocol included physical therapy with sling for 6 weeks, with no extension of the elbow beyond 90 degrees. After a gradual increase in the range of motion, the patient began a 12-week strengthening routine with a 10-pound weight limit. The postoperative X-Ray of the left scapula shows the humerus suspended in a stable position in Figure 4. 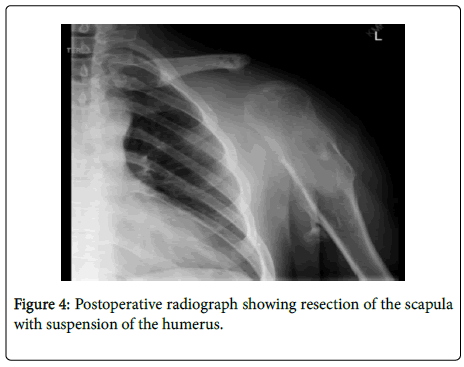 Figure 4: Postoperative radiograph showing resection of the scapula with suspension of the humerus.

Tumors of the scapula are frequently resected by intra-articular scapulectomy and endoprosthetic replacement. In a retrospective study, it was showed that scapular endoprosthesis was superior to humeral suspension [9]. Scapular prosthesis allowed for increased abduction with higher Musculoskeletal Tumor Society (MSTS) scores when compared to those patients who underwent humeral suspension. However, endoprosthetic replacement is not always an option due to time constraints or lack of available muscles for coverage. In our patient involvement of the rhomboid muscles and atrophied trapezius muscles precluded the use of scapular prosthesis due to the lack of adequate soft tissue coverage to form a stable pocket for the prosthesis. The initial procedure was used for neoplasms of the scapula but today the Tikhoff-Linberg procedure is often used for neoplasms of the proximal humerus. Due to the unpredictable and unique presentation of each tumor, various modifications to the original procedure have been described in the literature. A surgical classification system based on tumor location and extent was developed [10]. This classification system provides guidelines regarding the amount of resection needed for primary bone sarcomas and soft tissue sarcomas around the shoulder girdle. A technique involving shoulder joint excision followed by bone grafting to fill the void was described [11]. Attaching the humerus to the second rib was mentioned by researchers [12]. Later it was described as removing only the lateral part of the scapula with prosthetic reconstruction of a proximal humerus to the remaining scapula and clavicle [13]. These are just a few of numerous other modifications to the original procedure.

The oncologic objective of limb-sparing resections of the shoulder girdle is to achieve local tumor control. Distant metastasis is always possible and cannot be ruled out. The technique we present optimizes both tumor and functional control, without requiring a prosthesis. It is a valuable approach to scapular resection that maintains adequate elbow and hand function as well as aesthetic appearance. For aggressive tumors of the shoulder girdle, a variety of approaches and options must be considered. The utilitarian shoulder approach allows for extensive exposure and access to the shoulder girdle. Due to the variance in location of tumor and availability of soft tissues, it is essential to be familiar with various techniques/modifications such as scapular resection with humeral suspension.

Copyright: © 2020 Sampat R, et al. This is an open-access article distributed under the terms of the Creative Commons Attribution License, which permits unrestricted use, distribution, and reproduction in any medium, provided the original author and source are credited.