Ten Rhizobium isolates from nodules of Faba bean (Vicia faba L.) plants that represent different geographic and climatic locations in Egypt were evaluated for their tolerance against different doses of Zeus and Stomp as pesticides (250, 500 and 750 mg). In general, with increasing of pesticides doses, the tolerance and the viability of isolates were decreased. All isolates did not succeed to grow at the highest dose of Zeus (750 mg), while the isolates RLA, RLG and RLI succeeded to grow at the same concentration of Stomp. The most important nodulation genes nodA, nodD and the bidirectional promoter region between them were amplified using PCR and two principals bands were detected in the most isolates. The protein banding patterns of some Rhizobium isolates were detected using SDSPAGE analysis under pesticides stress and compared with their untreated control.

The symbiosis between the legumes plants and Rhizobia is very important process for agriculture that lead to fixation high rates of nitrogen and therefore increasing the fertility of soil [1,2]. In legumes specific flavonoids released from the roots interact with the NodD protein of Rhizobium to activate transcription of other nod genes for synthesizing of Nod factors [3]. Nod factors are implicated in intracellular thread and starting of nodule development. Rhizobia species and genotypes differ in their complement of nod genes and their allelic forms. These differences lead to diversity in Nod factor structure that save basis for characterization of Rhizobial isolates [4]. The population of Rhizobia collected from a pasture soil was characterized using the nod D gene as marker [5]. Moreover, RFLP was used to analyze the fragment containing nod DAB genes to discriminate Rhizobia from china legumes [6].

Previous papers showed that factors as soil temperature, pH and light can effect on the growth of nitrogen- fixing Rhizobia [7,8]. Herbicides are among the factors that may be also influence the growth of each Rhizobia and plant [1,9-11]. In this period, huge quantities of fungicides and herbicides are consumed toward control of plant pathogenic fungi and weeds that damage most of yield. Hence, it’s very important to avoid the harmful effects of these fungicides and herbicides on the various beneficial soil microorganisms like Rhizobium and as well as their biological activities related to soil fertility [12]. Herbicides are suggested to have negative effects on growth of Rhizobia [13,14]. Moreover, another study showed that the effect of herbicides on Rhizobium growth depends on the concentration and the weather conditions of its application [15]. The aims of this study were: characterization of some Egyptian Rhizobium isolates of Faba bean plants using Nod D-A specific primers; evaluation of their fungicides and herbicides tolerance in vitro and analysis their protein profiles using SDS-PAGE.

Collection and isolation of Rhizobium isolates

Table 1: Name of isolates and its locations.

Total genomic DNA of each isolate was extracted from bacterial cultures grown in yeast extract mannitol media (YEM) according to Ausubel et al. [17].

The primers used for the polymerase chain reaction (PCR) to amplify nodD-A region were: JZ3 (5’-AGGACGTCTTCAGTCCAAC-3’) and JZ5 (5’-AGAGCCGGCCATTGGACAG-3’), PCR were carried out in 25 μl reaction mixtures using the following conditions: initial denaturation at 94°C for 10 min, followed by 35 cycles of 94°C for 1 min, 68°C for 1 min, and 3 min at 72°C. A final extension was done at 72°C for 7 min. PCR products were separated on 2% agarose gels at 100 V for 1 h in TBE buffer, stained with ethidium bromide, and photographed under UV light.

Determination of fungicide and herbicide resistance

Two pesticides are commonly used in Egypt; Zeus (propyl 3-(dimethyl amino) propylcarbamate hydrochloride) is a fungicide (72.2 % active substrate) against fungal diseases as late blight and downy meldiew and Stomp (N-(1-ethyl propyl)-2,6- dinitro-3,4-xylidine) is strong herbicide (45.5% active substrate). These pesticides were tested for their in vitro inhibitory effects on the growth of Rhizobial isolates. Zeus and Stomp were added at doses of 250, 500 and 750 mg/L-1 to Yeast Extract Manitol medium (YEM) [18]. The plates were inoculated with 80 μl of the tested cultures (106 cell/ml-1) and incubated at 28°C for 72 h. Number of colonies were counted and compared with control.

The cultures of RLV isolates growing on Broth YEM medium were pelleted and resuspended in 40 μl of Laemmli Sample Buffer, 5 μl of 10%SDS and 5 μl of β-mercaptoethanol. The mixture was then boiling for 8 min and centrifugation to obtain the supernatant which contains protein fractionations. Sodium dodecyl sulfate- polyacrylamide gel electrophoresis (SDS-PAGE) was performed as described by Laemmli [19].

The PCR was used to amplify nodD-A region which contain nodD, nodA genes and the bidirectional promoter region between them using JZ couple primers as previously described by Zafran-Novak, et al. [20] (Figure 1). The amplification products gave two principles bands, the first band was found in all isolates with molecular weight about 500 bp, while the second band was found in most of isolates that was about 1200bp. According to previous studies, it was expected to obtain one fragment about 1680 bp including the nodulation genes D, A and the bidirectional promoter region between them. According to Zafran- Novak et al. [20], the first band of 500bp is related to nod A gene, while the second band was less than the expected band and found in all tested isolates except RLM, RLG and RLK isolates. Appearance of two bands in most of isolates may be as result of different mutations in primer binding site(s). The mutations can modify the target binding site of primers and synthesizing another binding sites in the region and this may explain the different sizes of bands. This explanation is compatible with conclusions of Zafran-Novak, et al. [20] who detected several mutations, (including deletions and insertions of 1-2 bp) which resulted in shorter regions in both autochthonous strains (201ZG and 301ZG). These mutations caused more differences in nucleotide sequences and therefore variation in NodD proteins length between different strains. 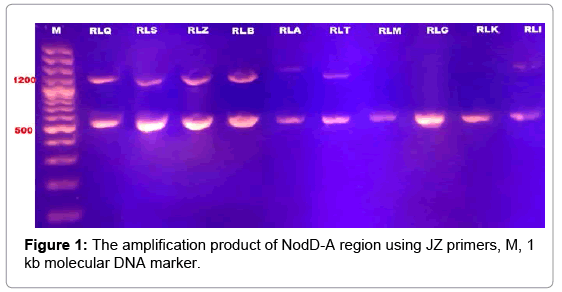 In this study, the RLV isolates were evaluated for their tolerance against two pesticides, Zeus as fungicide and stomp as strong herbicide. The isolates were grown in YEM medium supplemented with different concentration of pesticides (250, 500 and 750 mg) and the growth of colonies was considered as an indicator of tolerance (Table 2). For Zeus treatments, all isolates gave colonies on YEM medium supplemented with 250 and 500 mg of fungicide except the isolates RLQ and RLK that failed to grow. The isolate RLK of Kaha City failed to grow in presence of any fungicide doses and considered as the most sensitive one with this fungicide. Moreover, all isolates did not succeed to grow at the highest dose of fungicide (750 mg).

Table 2: Effects of different concentrations of Zeus and Stomp on the growth of tested isolates at YEMA Plates.

On the other side, all tested isolates can grow at different degrees on YEM medium supplemented with 250 and 500 mg of Stomp. Only, the isolates RLA, RLG and RLI to grow at the highest concentration 750 mg of Stomp. From the above results, we can conclude that with increasing of pesticides doses, the tolerance and the viability of isolates were decreased. The negative effect of the fungicide and the herbicide on Rhizobial isolates may be due to their suppression the effectiveness of Rhizobia [21-23]. Another report showed that the effect of Herbicides on Rhizobium growth depends on the concentration and the conditions of its application [15]. In general, the tolerance of isolates against herbicide was better than fungicide, one of explanations that the herbicide is directed basicly to the weeds while the fungicide is directed to fungi as microorganisms and therefore can affect Rhizobium also. The ability of isolates like RLA, RLI to grow well and tolerate both the fungicide and herbicide at different concentrations, may be as a result of adaptation of these isolates under these conditions (Figure 2). These results are compatible with previous studies shown that Rhizobia can tolerate many fungicides [24-28]. Figure 2: Effect the treatment with different concentrations of Zeus and Stomp on the growth of some isolates at YEMA plates.

Characterization of Rhizobium isolates by SDS-PAGE

Since the SDS-PAGE analysis of protein banding patterns is important in identification and differentiation among the isolates within the same group [29-30]. Hence, the protein banding patterns for some Rhizobium isolates were detected using SDS-PAGE analysis under pesticides stress and compared with their untreated control. Firstly for Zeus treatment, the isolates RLQ and RLK were selected as sensitive isolates while the isolate RLA was selected as tolerant isolate. The treatment by Zeus induced new bands and also increased the density of the other bands (Figure 3). Comparative analysis of the lanes showed production of two new protein bands (about 90 and 50 kDa) by the treated isolates and these bands did not detected with their control isolates. In general, the isolate RLA treated with Zeus have bands number more than other isolates and this may be explain their tolerance against pesticides. 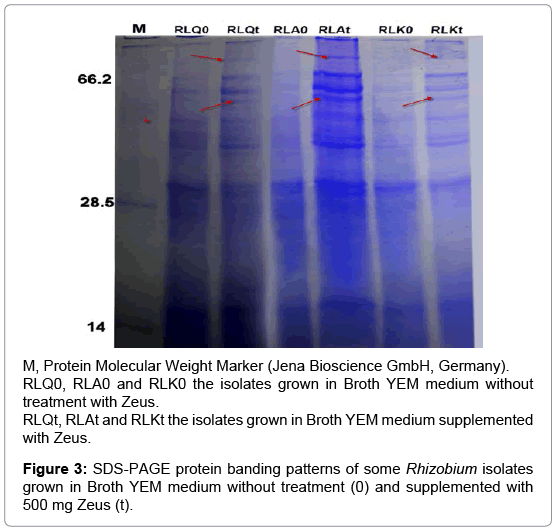 Secondly for Stomp treatment, the isolates RLQ, RLM and RLK were selected as sensitive isolates while the isolate RLA was selected as tolerant isolate. Surprisingly, the treatment by stomp reduced number of bands as compared with control (Figure 4). Moreover, a protein band (about 70 kDa) can be detected in the control isolates did not detected with their treated isolates. Detection of new protein bands in tolerant isolates is due to the differential response of these isolates to stress effects. These results are in compatible with previous studies on salt stress shown that some bands disappeared and new bands appeared after treatment by salt due to alterations in gene expression [31-33]. Copyright: © 2015 Abdel-lateif KS, et al. This is an open-a ccess article distributed under the terms of the Creative Commons Attribution License, which permitsunrestricted use, distribution, and reproduction in any medium, provided the original author and source are credited.