Copyright: © 2015 El-Beshlawy MM. This is an open-access article distributed under the terms of the Creative Commons Attribution License, which permits unrestricted use, distribution, and reproduction in any medium, provided the original author and source are credited.

The aim of this work was to investigate the ability of silicate wire ion selective electrode to measure 2,4 dichlorophenoxyacetic acid (2,4-D). The slope of the electrode was 56.2 mV decade -1 in the range from 10-6 to 10-2 M with lower limit of detection 8.3 × 10-7 M. The electrodes were successfully applied to determination of 2,4-D by separate and standard addition potentiometry. The electrode was used to detect the effect of pH and temperature on 2,4-D placed on baby watercress plant grown in the clay soil and the residue after five day from addition. Leaf chlorophylls quantity measured utilize spectrophotometric or colorimetric assay following extraction of pigments of watercress by ethanol. This work was carried at 286, 440, 662 nm. Beer’s law was obeyed in the concentration range of 2.21 mg/ml:2.21 μg/ml. The limits of detection were 2.21 μg/ml.

2,4-D is one of the most widely used herbicides in the world andis characterized as low-cost, quite efficient even at low concentrations,and moderately hazardous (class II) according to the World HealthOrganization [1] Although this herbicide easily moves though thesoil, its leaching into the groundwater can be minimized due to thedegradation by microorganisms and also the absorption by plants. Itsprimary route of degradation in the environment is by microorganisms,which increases with temperature, humidity, pH, and organic mattercontent [2,3]. Microbial degradation is a possible route for thebreakdown of 2,4-D, but it is very dependent on the characteristicsof the water. Laboratory studies have shown that in warm, nutrientrich water that has been previously treated with 2,4-D microbialdegradation can be a major factor for dissipation [4]. Residues of 2,4-Dand its salts or esters in water are commonly measure by extraction,chemical derivatization, separation by gas-liquid chromatographyand electron capture detection [4]. Other methods used in thedetermination of 2,4-D residues include high-performance liquid and
thin-layer chromatography [5-7].

Several methods have been reported for the analysis of 2,4-D in food and environmental samples. These methods includegas chromatography (GC) [8-10]. High-Performance LiquidChromatography (HPLC) and UV-spectrophotometry [11,12].However the chromatographic techniques are expensive and notavailable in many quality laboratories worldwide. Spectrophotometry isprobably the most convenient analytical technique for routine analysisbecause of its inherent simplicity, low cost and wide availability in
quality control laboratories [13].

Connect the wire electrode to the pH meter in the presence ofreference electrode. The calibration of the electrode was preceded using standard solutions of 2,4-D ranging from 10-7:10-2 M.

Separate and spiking addition method was used by the sequencefrom low to a higher concentration. The measured potential was plottedagainst logarithm of 2,4-D concentration after one min (Figure 1). Theelectrode was washed with distilled water and dried with tissue paperand back to base line by immersing in water between measurements, stored in a dark place immersed in 10-5 M. 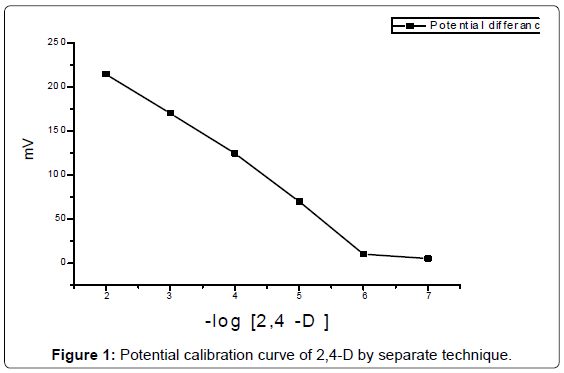 Calibration curve was measured from the lower (10-7 M 2,4-D) tothe higher concentrated (10-2 M of 2,4-D) solutions the time traces of the calibration curves of silicate electrode was represented in Figure 2. 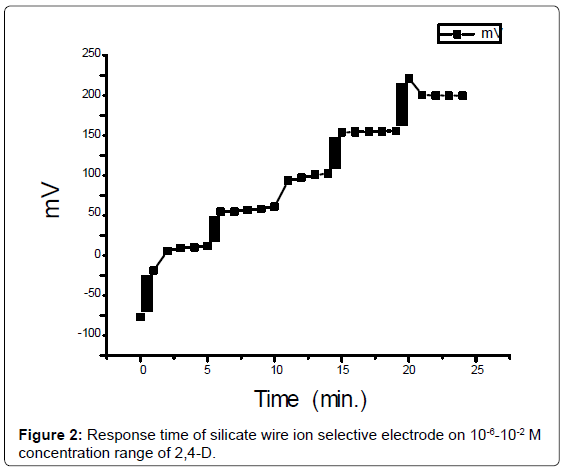 Selectivity coefficients Kpot2,4-D of the electrodes towards differentspecies were determined by the standard addition technique method [14] in which the following equation was applied

where a`A known activity of primary ion, aA fixed activity ofprimary ion and aB activity of interfering ions. The results are appear by potting mV in the presence of different interference (Figure 3). 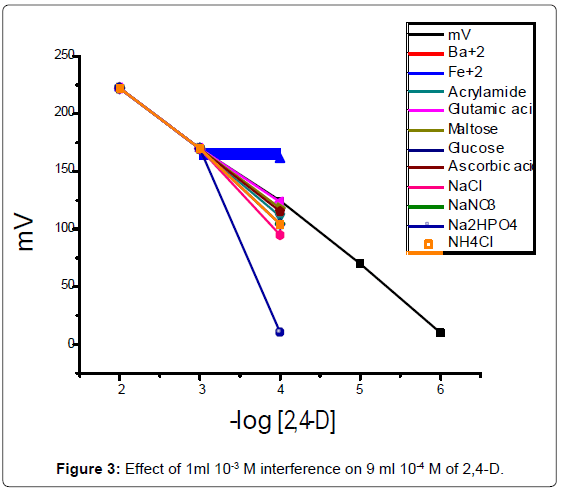 The effect of pH of the potential of electrode was investigated. Thepotential was measured at a 2,4-D concentration solution (10-5 M) fromthe pH value of 3 up to 9. The solution was acidified by the additionof very small volumes of 0.2 N HCl then the pH value was increased gradually using 0.2 N NaOH for each pH value, two pH/mV meterswere used to measure the potential. The potential was recorded and plotted against different pH values (Figure 4). 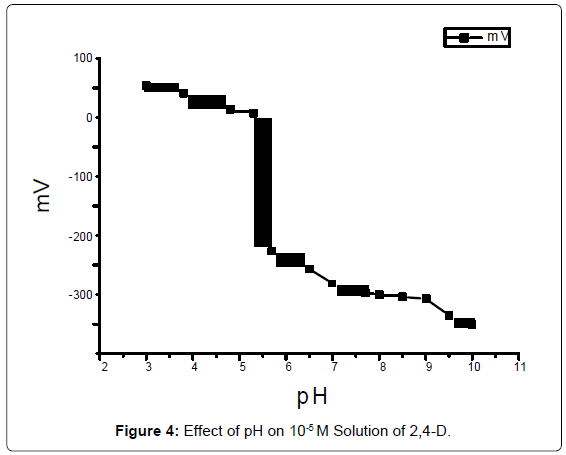 Growing watercress: Watercress seeds were germinated in 250gm clay dry soil with about 3-10 seeds per pot, after two weak. The temperature of the plants was maintained between 20-25°C.

Residual of 2,4-D: After two, three and five days from adding pesticides on the pot of watercress plants. 40 ml distilled waterare added to each pot. The calibration curve was used to determinethe concentration of 2,4-D in each pot plant solution above, allmeasurements was recorded after one minute of electrode immersing.Effect of pH and temperature on the residual was drawing in Figures 5 and 6. 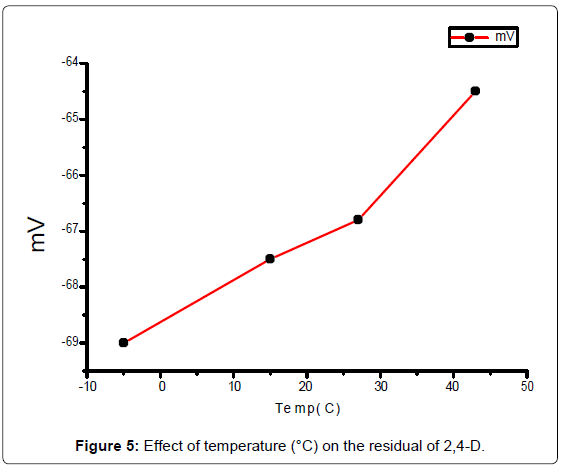 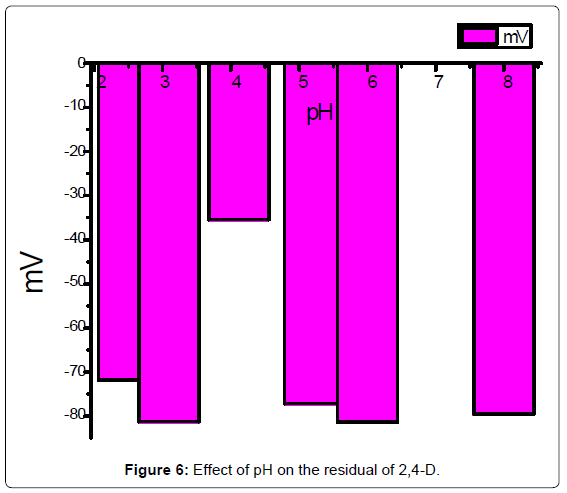 Selection of solvent: It was important to see the effects of varioussolvents on the photodegradation of 2,4-D. After assessing the solubility of 2,4-D in different solvent as methanol, ethanol, 25% ethanol and 2,4 dichloroethane. 25% ethanol has been selected as common solvent for developing spectral characteristics, 0.00221 ng /ml solution of 2,4-D present in each solution. The absorbencies are plotted against the different solvent at 286 nm (Figure 7). It has been observed the absorption within half an hour of the beginning of the preparations in each solvent. Blank solution was the solvent. 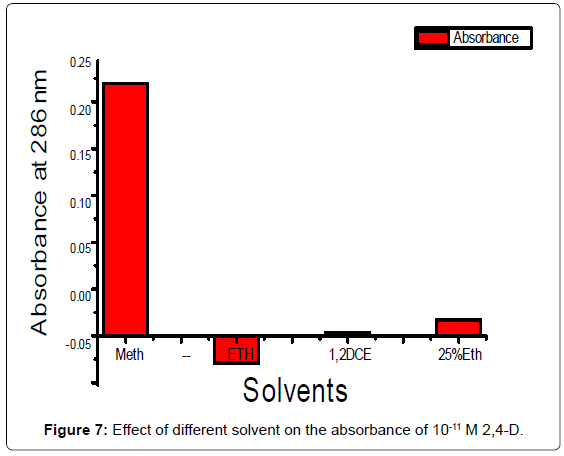 Beer's Law concentration range: The stock solution were suitable diluted with 25% ethanol to get concentration range from 0.00221 gml-1-0.0221 ng/ml for 2,4-D. The absorbance was measured at 286 nm.Standards of the compound of interest are made, and their absorbanceand concentration values are used to create a standardization graph(Figure 8). From the calibration curve 2,4-D obey Beer's law between 2.21 mg/ml to 2.21 μg/ml. 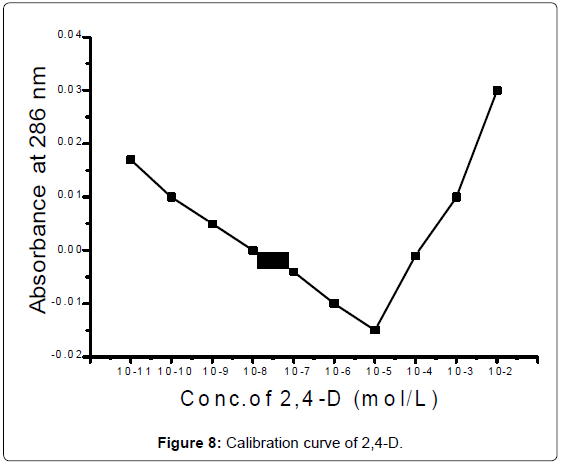 Photo degradation of 2,4-D by UV Light: The cuvet was filledwithin about 1.5 ml of the top with the blank and 10-3 M of 2,4-Dsolution. Wipe the outside of each cuvet gently with a lint-free tissueto remove any fingerprints or solution that may be on the surface.Adjust the wavelength to 286 nm, the absorbance of 10-3 M of 2,4-D was determined and plotted against time (Figure 9). 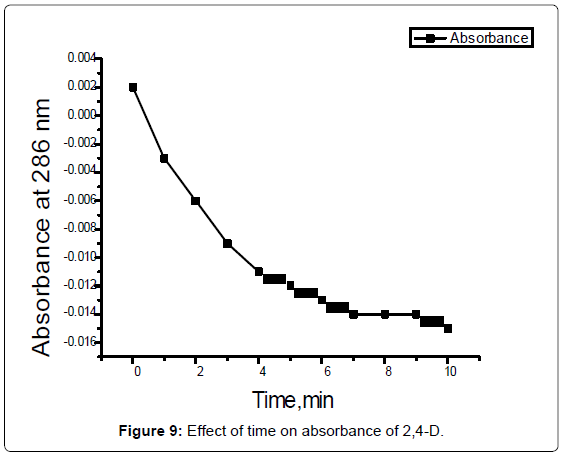 Effect of 2,4-D on watercress leaf chlorophyll Extract: Youngbaby-leaf watercress were acquired directly from organic local farmersin region of South Saudi Arabia. Cut of 7 g of watercress leaf, rinse the leaves with distilled water and pat dry. Tear up the leaves and place them in a 50 ml ethanol half an hour. Ethanol is a water-miscible solvent, removes all pigments from soft-leafed. The blank solution was prepared by 1 ml of chlorophyll extract and 11 ml distilled water and sample stock solutions were prepared by mixing aliquots of different concentration (10-11, 10-5 and 10-3) of 2,4-D were precisely pipette into 10 ml distelled water and 1 ml chlorophyll extract. The absorbance of solutions was measured at 286, 440, 662 nm and plotted against different concentration of 2,4-D in sample solutions (Figure 10). 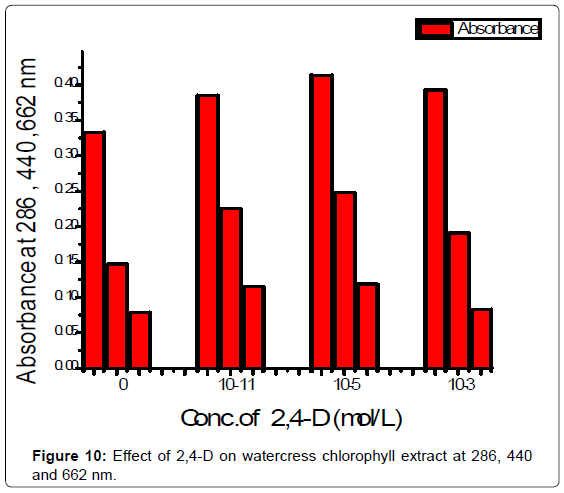 Time considerations: Effect of time on the absorbance of watercressleaf chlorophyll extract with 1 ml different concentration of (10-11, 10-5 and 10-3 M) of 2,4-D solutions was determined and plotted (Figure 11). 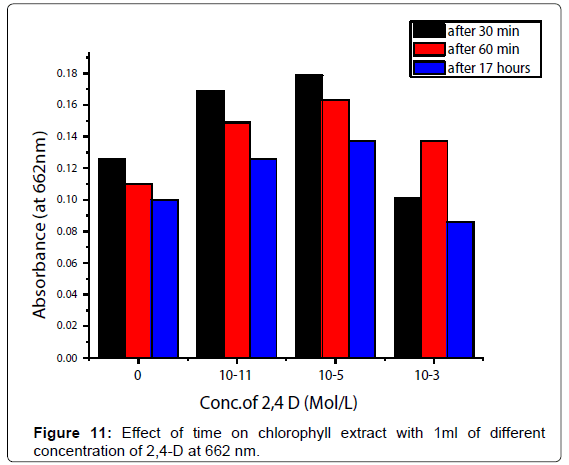 Figure 11: Effect of time on chlorophyll extract with 1ml of different concentration of 2,4-D at 662 nm.

2,4-D was classified among the phenoxy acid herbicides MCPA asa class-2B carcinogen possibly carcinogenic to humans. The movementof auxin, (2,4-D) is a common herbicide,. Denmark, Norway, Kuwaitand the Canadian provinces of Québec and Ontario, 2,4-D use is severely restricted in the country of Belize [15].

2,4-D concentration is one of the affecting factor to the rate ofreaction, so that affects to the performance of silicate ion selectiveelectrode. It has been found that separate technique is the best wayto apply Nernst equation. Response characteristics of the silicate ionselective electrode appear in Table 1, the results showed that the highest sensitivity is 42.1 ng/ml.

The purpose of this study was to investigate the working electrode conditions to obtain the maximum performance. The research studiedof the electrode character was pH and response time. The pH optimumof 2,4-D at a range from 2.5 to 5.5. Response time is a measure ofthe rate of degradation reaction of 2,4-D. The response time withconcentration higher than 10-4 M were of the order of 15 seconds.The silicate electrode has good selectivity to 2,4-D, in the presence ofdouble-charged metal ions, as Fe+2 and Glutamic acid, and has poor sensitivity in the presence of Na2HPO4.

The residual pesticide was decreases to 1.005, 0.663, 0.221 μg ml-1,after two, three, and five days respectively from the original solution(2.21 μg ml-1) added on the pots of watercress. The number of plants didnot effect on the residual of the pesticide concentration. The residualof 2,4-D degradation of (10.6 μg ml-1) by the temperature effect wasvaried from -5 to 43°C (Figure 5), the large amount of residual of 2,4-D was at 43°C, for a period of time following treatment. It is thereforeto be expected that temperature may influence the rate of degradation response and govern to some extent, Plants that put out the pesticideat low temperature longer than the age of the plants that put them ata temperature of exterminator other heat. This research study reportsthe concentrations of residual 2,4-D (pH 2.5-9) taken up by watercressgrown. This study showed that the pH 4 of 2,4-D solution is the lower pesticide absorption by soil and watercress plants [16,17].

2,4-D was studied in the concentration range 10-11:10-2 M .The absorbance was decreased from 10-11:10-5 M the reason is thephotodegradation of 2,4-D in this region. Microbial degradation isconsidered and breakdown of 2,4-D . The most important mechanism of microbial degradation involves the removal of the acetic acid side chain. This is followed by ring cleavage and degradation to produce aliphatic acids such as succinic acid. The rate of microbial degradation is dependent upon the water potential 17, the absorbance increased and obeyed Beer's law from 10-5:10-2 M. The molar absorptivity coefficient equal to 1000 l mol-1 cm-1. Pigment content of chlorophyll were increased after adding , the reason is photodegradation of 2,4-D in this region.10-3 M < 10-5 M < 10-11 M of 2,4-D (Figure 10) at 286,440 and 662 nm. The absorption decreasing with the effect of time (Figure 11).

Silicate wire electrodes was suitable for the determination of 2,4-Dwith regard to working concentration range, slope, pH range, responsetime, and selectivity . The electrodes exhibited good reproducibilityover a useful lifetime of 2 months. Spectrophotometric study allowsunderstand 2,4-D toxicity and it’s excellent deleterious effect. Thereproducibility, recovery, and operational simplicity of the methodsmake them suitable to determined 2,4-D. The detection limit was 2.21 μg ml-1.

The author would like to thank the publishers for their interest in reviewing find.