Neoadjuvant Chemotherapy in the Management of Extraovarian Yolk Sac Tumor: A Case Report and A Review of the Literature

Copyright: ©Mustafa S, et al. This is an open-access article distributed under the terms of the Creative Commons Attribution License, which permits unrestricted use, distribution, and reproduction in any medium, provided the original author and source are credited.

A 32-year-old single woman came for a second opinion following explorative laparotomy secondary to pelvic mass and histologic results of an undetermined malignancy. Our evaluation revealed a yolk sac tumor involving the cecum with a cutaneous fistula and pelvic infection. The patient was treated with three courses of Bleomycin, Etoposide and Cisplatin (BEP) followed by an optimal cytoreductive surgery and another two courses of Etoposide and Platinum-AQ (EP). There is no evidence of disease during a two years follow-up.

Conclusion: NACT followed by fertility sparing surgery should be considered as an alternative to primary debulking surgery in advanced YSTs.

During embryogenesis, at the fourth through the sixth weeks of development, germ cells migrate along the urogenital ridge. Misplacement and a remnant tissue anywhere along the migration course may play a role in the pathogenesis of extra gonadal YSTs. Although the exact mechanism of this misplacement is poorly understood, malignant transformation of these cells leads to primary germ cell tumors at these sites [3,4].

Since it occurs mainly in girls and young women of childbearing ages, the standard of care consists of fertility-sparing surgery and postoperative adjuvant chemotherapy with Bleomycin, Etoposide, and Cisplatin (BEP). BEP has become the most effective regimen and therefore the first line of chemotherapy since 1990s [5].

In patients with an advanced stage of disease, a cytoreductive surgery with fertility sparing is often impossible. In these cases, neoadjuvant chemotherapy (NACT) may be appropriate although this approach has not been widely investigated.

We report a case of extra gonadal YST treaded with NACT, followed by cytoreductive surgery and adjuvant chemotherapy. We discuss the role of NACT treatment in germ cell tumors reviewing the literature.

The patient presented to our department for a “second opinion”. On admission, she was febrile, discharging pus from an infected surgical wound. A review of the histologic specimen suggested Hepatic Yolk Sac Tumor. The CT scan demonstrated a solid mass (Figure 1) and fluid collection in the pelvis with a fistula extending from the fluid collection to the abdominal wall. 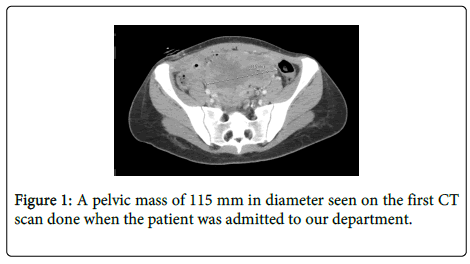 Figure 1: A pelvic mass of 115 mm in diameter seen on the first CT scan done when the patient was admitted to our department.

In addition, an involvement of the cecum was also suspected. Serum alpha-fetoprotein (AFP) was elevated (105.5 ng/ml, normal values <10 ng/ml) with normal values of cancer antigen 125 (CA-125). There was a leukocytosis with a left shift and the culture of the purulent discharge revealed mixed organisms. Antibiotics were administered according to sensitivity.

Due to the difficulties to obtain significant debulking and the occurrence of infection involving the abdominal scar, we decided to administer neoadjuvant chemotherapy (NACT) using BEP along with an aggressive antibiotic treatment. The patient received three courses of BEP with total doses of Bleomycin 270 IU, Etoposide 1700 mg, and Cisplatin 432 mg. Following the third course of chemotherapy AFP decreased to normal values (5 ng/ml). The repeated CT scan showed significant regression of the pelvic mass with a spontaneous resolution of the fistula (Figure 2). 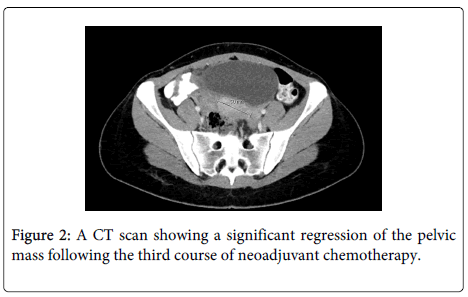 Figure 2: A CT scan showing a significant regression of the pelvic mass following the third course of neoadjuvant chemotherapy.

Following the response to chemotherapy, we decided to perform surgery in order to achieve a complete debulking. On the the explorative laparotomy the following findings were noted: the omentum was attached to the surgical scar, the tumor was located in the mesocolon and involved the terminal ileum, the cecum and the sigmoid colon. The conglomerate was attached to the uterus and the right adnexa. However, separation of the tumor mass from the attached organs was feasible with no evidence of macroscopic tumor in the uterus and ovaries. Biopsies from both ovaries did not reveal any evidence of malignancy.

Right hemicolectomy, resection of a small bowel loop, and partial sigmoidectomy were performed with iliocolic and sigmoido-rectal anastomosis. Omentectomy was also performed while the uterus and ovaries were preserved.

The histologic results revealed a Yolk sac tumor originated from the mesocolon with severe cellular atypia. The tumor was detected on the surface of the colon and one out of 51 lymph nodes revealed necrotic metastasis. The histological evaluation of the specimen presented the Schiller-Duval body (Figure 3). Figure 3: The histological evaluation of the specimen exhibited the Schiller-Duval body which represent the pathognomonic histological feature of yolk sac tumors.

YSTs usually occur in the gonads and extragonadal YSTs, although rare, have been reported in several cases [6-10]. The most common sites for extragonadal YSTs are the sacrococcygeal region, the mediastinum [6], the retro peritoneum, and the pineal gland [2]. Another common location is the female reproductive tract such as the vagina, the vulva, the cervix, and the uterine corpus [11,12]. The mesentery as a primary site of an extragonadal YST, has been reported in one case describing two YSTs presented in the mesentery of the jejunum and the transverse colon in two male patients (2 and 17 years old). Both patients received chemotherapy postoperatively [13].

Due to their low incidence, no prospective randomized studies have been published about treatment and the management of these tumors is based on the results of retrospective studies and on the management of ovarian epithelial cancer (EOC) [19]. Similar to EOC, cytoreductive surgery strongly affects the prognosis of YSTs [18]. As in other germ cell tumors, the standard of care consists of surgery followed by postoperative chemotherapy. Since most of YSTs originate from the ovaries and many of these patient are of childbearing ages it is acceptable to preserve fertility by sparing the uterus and at least one of the ovaries. In case of extra gonadal YSTs there is no indication to remove the uterus or ovaries if biopsies exclude malignancy as in our case.

Due to the fact that YSTs are highly aggressive with 30% to 40% of them being in stage III or IV at the time of diagnosis [20], optimal debulking is not always feasible or may be associated with a significant increase in morbidity

Several studies demonstrated that using NACT in EOC is associated with less morbidity and an increase probability to achieve optimal cytoreduction, especially in patients with an advanced stage and low performance status [21-26].

Unlike EOC, the data is limited regarding the role of NACT in advanced malignant germ cell tumors of the ovary (MOGCT). In a recent study addressing the role of NACT in the management of advanced ovarian YST reported by Yan Lu et al. [27] 21 patients with stage III or IV diseases received NACT compared with 32 patients who underwent primary debulking surgery followed by adjuvant chemotherapy. The results showed that after NACT the overall status of the patients was improved and patients treated with NACT had a higher rate of optimal cytoreduction with less peri-operative morbidities. As previously mentioned, only few studies examined the role of NACT in the management of advanced MOGCT [27,28].Talukdar et al.[28] reported the results of 23 patients diagnosed with MOGCT with advanced bulky disease and poor performance status who received NACT, compared with 43 patients with advanced disease who underwent upfront surgery followed by adjuvant chemotherapy. Following NACT, 21 patients responded, achieving a complete response (CR) in 16 with pathological CR in 13 of them. Other small series reported good outcome using preoperative chemotherapy [29-31]. The excellent results of chemotherapy in these advance cases should encourage us to use more liberally the approach of NACT in patients with germ cell tumors. Furthermore, even if the disease confines to one ovary, NACT may decrease significantly the tumor size allowing us to improve fertility sparing outcome by conversion of the traditional explorative laparotomy to laparoscopic surgery. In addition to its traditional advantages (painless, cosmetic result, fewer complications, faster return to normal activities, and shorter hospital stay), laparoscopy may create fewer post-operative adhesions, which are essential for this population [32,33].

Recently Gremeau et al. [34] reported the results of a retrospective study comparing open versus laparoscopic surgery in the management of non-epithelial ovarian cancer. The results showed that laparoscopy may be a good alternative to laparotomy for the initial management of non-epithelial ovarian malignancies with no differences in the rate of complications, the number of lymph nodes removed, and the need for adjuvant treatment.

Our and other success in taking care of complicated case, should lead us to use more widely NACT in the management of patients with germ cell tumor. We conclude that NACT followed by fertility sparing surgery should be considered as an alternative to primary debulking surgery in advanced YSTs.