Copyright: © 2016 Schwartz M, et al. This is an open-access article distributed under the terms of the Creative Commons Attribution License, which permits unrestricted use, distribution, and reproduction in any medium, provided the original author and source are credited.

Objective: The aim of this study is to contribute to an understanding of the clinical presentation and pathological features of neurofibrillary tangle predominant dementia (NFTPD) that will assist with the eventual development of methods for its ante-mortem identification. Method: We contrast eight NFTPD cases identified in the Banner Sun Health Research Institute Brain and Body Donation Program (SHRI-BBDP) database to 114 Alzheimer’s disease (AD) subjects, in terms of their demographics, clinical features, and pathological features. Results: When NFTPD subjects were compared to AD subjects, they were found to have a later onset of symptoms, an older age at death, less impairment prior to death, and less frequent appearance of the Apolipoprotein E ε4 variant. None of the eight NFTPD subjects met the clinical criteria for probable AD. They possessed a diverse range of diagnoses including possible AD, mixed vascular dementia (VAD), dementia NOS, and dementia with Lewy bodies (DLB). AD-related pathology, for both amyloid plaques and neurofibrillary tangles, was less severe in NFTPD subjects than in AD subjects. All eight NFTPD subjects were classified as neurofibrillary tangle Braak stage IV and therefore had fewer tangles in the neocortex when compared to AD subjects with mean Braak stage V (range II–VI). Conclusion: NFTPD subjects have dementia despite a lower pathological burden when compared to AD subjects. In this small sample, the ante-mortem presentation is such that NFTPD subjects are not diagnosed with probable AD. The cognitive and non-cognitive clinical features (delusions, depression, parkinsonism, and hallucinations) of NFTPD and AD are very similar and do not serve as indicators for a diagnosis, but older age (>80), lack of an ApoE ε4 allele and less severe cognitive impairment should further inform the differential diagnosis of NFTPD from AD.

Neurofibrillary tangle predominant dementia (NFTPD) is a sporadic subtype of progressive dementia, affecting elderly patients, as defined by a clinical diagnosis of dementia, the presence of 3R and 4R neurofibrillary tangles (NFT) isoforms in limbic areas (usually Braak Stage IV), and the absence or relative scarcity of amyloid (Aβ) plaques in the brain [1-4]. In contrast, Alzheimer’s Dementia (AD) is a progressive dementia characterized by the presence of 3R and 4R neurofibrillary tangles and abundant amyloid plaques [5]. In AD, neurofibrillary tangles are understood to be closely linked with the severity and duration of dementia [6-10]. Approximately 15-30% of those clinically diagnosed with mild to moderate probable AD lack sufficient plaques and/or neurofibrillary tangles to meet AD neuropathological criteria [11,12]. Some of these [12,13] are neuropathologically demonstrated NFTPD but are not clinically distinguishable from AD or other dementias ante-mortem. In a set of individuals clinically diagnosed with mild to moderate AD derived from US National Institute on Aging AD centers, Monsell et al. found that 45% had extensive neurofibrillary degeneration and minimal Aβ plaques [13]. In a group of Apolipoprotein E ε4 (APOE4) non-carriers with mild to moderate AD, 37% had low amyloid levels [13]. In contrast, only 13% of APOE4 carriers with the same diagnosis had low amyloid levels [13]. Identifying individuals who are diagnosed with AD, but have low amyloid levels will be critical as more amyloid-targeted treatments for AD are developed [14]. Clinical characterization of NFTPD has been limited by the dementia’s relatively low prevalence: only 0.7% to 5.8% of clinically diagnosed dementia cases are pathologically diagnosed as NFTPD [4].

Previous research on NFTPD has not established differences between the clinical presentation of NFTPD and AD. The aim of this study is to contribute to an understanding of the clinical and pathological presentation of NFTPD that might eventually enable ante-mortem diagnosis. We contrast eight NFTPD cases identified in the Brain and Body Donation Program (BBDP) database to 114 AD subjects [15,16].

Complete clinical and neuropathological examinations were performed on deceased subjects who had enrolled in the Banner Sun Health Research Institute Brain and Body Donation Program (BSHRIBBDP) [15,16]. All enrolled subjects or their legal representatives signed an Institutional Review Board-approved informed consent form before the time of death. All subjects received annual standardized test batteries that include general neurological, cognitive, and movement disorder components.

In addition, paraffin-embedded sections from multiple brain regions including the olfactory bulb, amygdala, brainstem and cerebral cortex were used to document α-synucleinopathies using an immunohistochemical method for α-synuclein phosphorylated at serine 129 [16,21-24].Densities of Lewy-type α-synucleinopathy (LTS) were graded by reference to the DLB Consortium III template.

Table 1: Demographic and clinical characteristics of NFTPD and AD subjects. 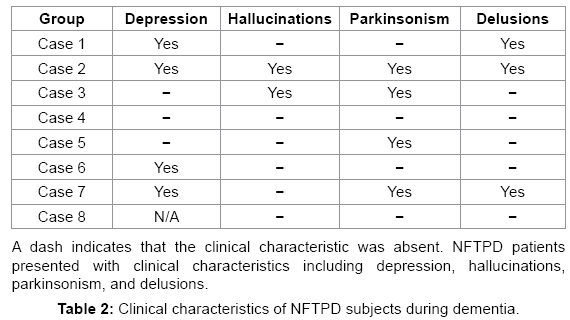 This paper compares the clinical and pathological presentation of autopsy-confirmed NFTPD to AD. We found that NFTPD cases had a later onset of symptoms, an older age at death, less impairment before death, and less frequent appearance of APOE4. We found that none of the NFTPD subjects met the clinical criteria for probable or definite AD. The overall AD-related pathology was less severe in NFTPD cases than AD cases. NFTPD subjects had lower neuritic plaque densities as well as total tangle density. All the NFTPD subjects were classified as NFT Braak stage IV and therefore had fewer tangles in the neocortex when compared to most AD subjects.

We found different rates of hallucinations, parkinsonism, and depression in our eight NFTPD cases than have been previously identified for NFTPD; however, our conclusions may be limited by our small sample size. We found that 37.5% of NFTPD cases presented with delusions during the course of the dementia. A study that found delusions in an NFTPD group attributed the symptom to the presence of argyrophilic grains in the nucleus accumbens [28]. However, only one case of delusions in our NFTPD group had argyrophilic grain pathology. We identified three clinical symptoms for which our prevalence was more frequent than what was reported by Jellinger and Attems: hallucinations (25% vs. 1.96%), parkinsonism (50% vs. 1.96%), and depression (50% vs. 17.5%) [4]. These differences suggest that hallucinations, parkinsonism, and depression may be present in NFTPD at a higher rate than has been previously identified.

There may be a slightly higher rate of parkinsonism in NFTPD than AD (50% vs. 9-36% [32,38]). The four non-cognitive clinical features (delusions, hallucinations, depression, and parkinsonism) examined here do not clinically distinguish NFTPD patients from AD patients, suggesting that, as documented by autopsy studies, the dominant underlying cause of dementia in both diseases, accumulation of neurofibrillary tangles, results in a very similar clinical profile.

Our group of NFTPD patients received a mixed set of clinical diagnoses: possible AD (50%), VAD (25%), dementia NOS (12.5%) and DLB (12.5%). Post-mortem, none of the cases had enough pathology to meet criteria for clinical-pathological diagnosis of AD, VAD, or DLB. These clinical diagnoses differ in frequency from those reported by Jellinger and Attems. The three most frequent diagnoses in Jellinger and Attems’ results were probable AD (47%), possible AD (17.6%), and nonspecific dementia (17.6%) [4]. Differences in the rate of cases that meet a clinical diagnosis of probable AD might reflect how rigorously the clinical criteria for diagnosing AD were used in each study. In this study we analyzed a small group comprised of eight subjects while Jellinger and Attems presented data for fifty-one subjects [4]. The wide variety of clinical diagnoses received by NFTPD patients might indicate that clinicians often recognize that these subjects have something other than the common presentation of AD.

Recently, the diagnosis, primarily age-related tauopathy (PART), has been introduced as a contrasting diagnosis to NFTPD [2].The PART diagnosis is based on the presence of neurofibrillary tangles and the absence of amyloid plaques in the brain of an individual with or without dementia [2]. PART is distinct from NFTPD because it is a purely pathological diagnosis that does not consider the clinical presentation of the individual [2]. While PART may be advantageous in a pathology setting by increasing the diversity of vocabulary available to pathologists to accurately describe patients, it does not contribute to this study’s consideration of NFTPD. The PART diagnosis has also been challenged in its distinction from AD. An examination of the pathology present in age groups ranging from 0 to 100 years old indicates that tauopathies may be part of the pathological process that produces AD [39]. The aim of this study is to identify clinical features that may distinguish NFTPD patients from AD patients. The usage of the PART diagnosis would include individuals who do not have dementia and who are not at risk for an AD misdiagnosis.

In over 15 years of data collection including 1,218 cases, the BBDP diagnosed only eight cases of NFTPD, which represents only one percent of dementia cases. This may be partially reflective of a decreased tendency to diagnose NFTPD in earlier years, prior to its widespread recognition as a diagnostic entity. The BBDP performs detailed brain examinations on every subject who comes to autopsy and several staining’s are performed to unmask a myriad of possible pathologies [15,16]. The strength of our eight cases lies in the detailed clinical data collected and the thorough pathological analysis.

The findings of our study and others on the clinical diagnoses of NFTPD patients indicate that this dementia is often recognized by clinicians as something different from classical AD, but there is no clear set of differentiating features. The cognitive and non-cognitive clinical features of NFTPD and AD are very similar and do not serve as indicators for a diagnosis, but older age (>80), lack of an ApoE ε4 allele and less severe cognitive impairment should bring NFTPD into the differential diagnosis. The details that will clinically distinguish NFTPD from AD most likely lie in the nuances of neuropsychological testing. An in-depth review of testing results for large cohorts of NFTPD and AD has the potential to reveal the distinguishing factors that will allow for the pre-mortem diagnosis of NFTPD.