Oral Pigmented Lesions as a Consequence of the Human Papillomavirus

Copyright: ©2014 Pokupec, et al. This is an open-access article distributed under the terms of the Creative Commons Attribution License, which permits unrestricted use, distribution, and reproduction in any medium, provided the original author and source are credited.

Pigmentation in the oral cavity may be focal or diffusal. Some pigmentation is a sign or symptoms of internal illnesses in the form of blue, brown and black color changes which may be caused by endogenous and exogenous pigmentations. . Endogenic pigmentation is indicative of the presence of pigment organism such as hemoglobin and melanin. Theoretically [1], Melanin is a derivative of tyrosine, synthesized in melanocytes and accumulates in the form of melanic granules in the surrounding basal cells that protect against harmful effects. Exogenic pigmentation enters under the mucous membrane of direct trauma, rather than the indirect ingestion and absorption of the intestine. It is transmitted through the blood stream and goes through the epithelia. It is hard to determine the main cause of the occurrence of pigmented melanocyte changes. But it is safe to say that these are the results of changes in the body which therefore is necessary to analyze in detail [2]. A lot of diseases of our system and can cause pathological and non-pathological changes in the oral cavity. They can be caused by a variety of systemic diseases, such as viral, bacterial diseases or other diseases caused by infected organs. Viral diseases can often be manifested as pathological changes in the oral cavity. The infection human papillomavirus (HPV) is the most common infection caused by a sexually transmitted infection. The virus has a high affinity for squamous epithelium and is propagated in terminally differentiated epithelial cells which are approximately about 150 species of HPV in which 40 species cause infections in the genital region and some genotypes with malignant potential. Due to the microtrauma to the skin and mucous membranes during genital contact, it is easier to contract an infection of the basal layer of stratified squamous epithelium of the genital tract where the virus reproduces and disrupts normal cell cycle [3]. Most people are unaware that they are carriers of HPV which the virus can be transmitted to their sexual partners referred as transient infection. It is believed that sexually active person has the possibility and the potential to contract HPV infection [4]. The immune response of the body recognizes foreign agents and therefore fights against them. Thereby, 90% of HPV infections in our body sustain the infection within two years symptoms free.

However, with some people, HPV infections can cause anogenital warts or other changes. There is no diagnostic method that can determine with certainty that a person will develop clinically visible changes [5,6]. This is why a large number of patients have no clear symptoms of the disease. Luckily, today, we have various diagnostic methods based on molecular biology that help us determine and identify the causative agent in a quicker, easier and more accurate fashion in which a potential disease could be diagnosed and remedied immediately with an early treatment [7] Examination of the oral cavity should not be neglected even without signs of significant pathological changes such as ulceration or hyperkeratotic changes. But every pathological change that take place should be considered as a good reason for diagnostic checkup.

Our research is based on the appearance of pigmented melanocyte changes in the oral cavity. The pilot study had a total of 60 subjects with 30 patients as a control group whose ages are between 30-50 years of age. From the subjects, 25 women and 5 men have oral cavity brown pigmentation especially on the buccal mucosa area. The control group had the presence of pigmented lesions of the oral cavity in the oral and sublingual areas. A tissue sample from the pigmented areas was taken through biopsy and histopathological findings revealed the presence of koilocytes. The control group was subjected to cytological method and DNA-PCR technique which determines the length of DNA fragments using restriction endonucleases and polymerase chain reaction which are both sensitive to viruses. Within the pigmented lesions, we established the presence of HPV 16 and HPV18 infection in the oral cavity. Subsequently, the patients were sent for a battery of tests such as HIV test, biochemical and hematological testing’s which resulted to no significant changes.

Our research is based on the premise that the prevalence of human papillomavirus is not only limited in the genital areas of both male and female but can also be found in the oral cavity as well. Pathological changes like pigmented lesions that may appear in the oral cavity in the form of warts (verruca vulgaris), sharp-pointed condyloma (condyloma acuminatum), leukoplakia and focal epithelial hyperplasia (Heck's disease) are clear symptoms and signs of the presence of human papilloma virus. Table 1 show that 86.7% of patients have koilocytes while the control group has 6.7% koilocytes [8].

Tables 2 and 3 show that HPV 16 and 18 were present in patients with pigmented lesions (as established through PCR technique.) Thereby HPV 16 was present among 50% of the patients, while 16.7% of the control group had HPV16. Furthermore, 56.7% of the patients had HPV18 present while no HPV18 was found in the control group. These findings are supported by Cubie and associates.

Table 2: Contingency tables presence of HPV 16 in groups of patients with pigmetacijama and x2-test result

Table 3: Contingency tables presence of HPV 18 in groups of patients with pigmentation and result x2-test

Figure 1 shows the relationship between gender and age especially women over the age of 35. Our study confirmed Darwin and associates' research that HPV is prevalent among male then females (9). 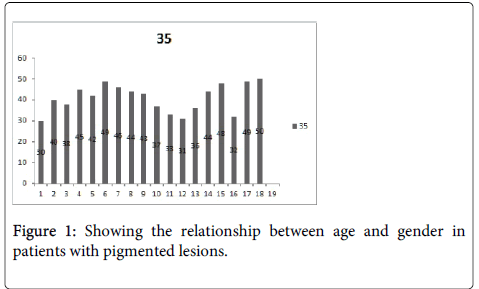 Figure 1: Showing the relationship between age and gender in patients with pigmented lesions.

Figures 2 and 3 shows the relationship between age and gender among patients with HPV16 in which HPV16 is more prevalent in women from 35 and above. The relationship between age and gender with regard to the presence of HPV 18 that is predominant to females at the age of 35 which is the same findings with HPV16. Beachler and his associates found the same results indicating the prevalence of HPV18 among females within the age of 40 years old. 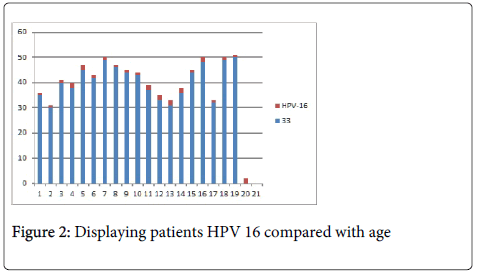 The relationships between HPV viruses 16:18 in relation to age and gender as it shows equal presence of HPV 16 and HPV 18 virus among women ages between 33-35 years old. Figure 4 shows the amount of koilocytes present in HPV 16 and 18, where the virus is noticeably highly dominant against koilocytes. 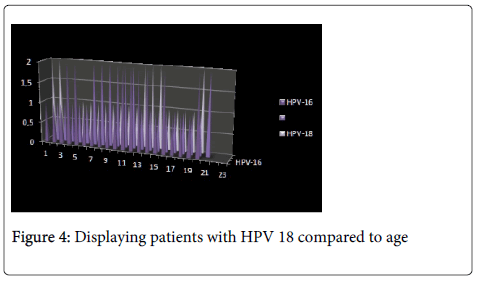 Since the variables in the study can only assume discrete values, methods of analysis can be selected from nonparametric statistics. These methods are based on the frequency of certain discrete values of the variables and their ranks. The identification of individual variables will be used for testing hypothesis to the possible relationship between certain pairs of variables (X2-test, tests based on ranks [10,11].

We will further enhance our research and continue a thorough analysis based on the pilot study.

I would like to extend my special thanks to those who participated in our research study and to those who have shown utmost support and encouragements to bring this pilot research in complete fruition. May this research bring new ideas, medical solution and contribution in the field of science.