Copyright: © 2014 Camargo CHF, et al. This is an open-access article distributed under the terms of the Creative Commons Attribution License, which permits unrestricted use, distribution, and reproduction in any medium, provided the original author and source are credited.

Objective: The aim of this study was to identify possible clinical variables associated with orthostatic hypotension (OH) in patients with Parkinson’s disease. Methods: The study was an analytical observational case-control one.Twenty patients were selected and divided into two groups: patients with Parkinson’s disease and OH, and patients with Parkinson’s disease without OH. The groups were compared in terms of parameters such as age, age of onset of symptoms, duration of levodopa use, duration of the disease before levodopa was started, comorbidities and other medications being used. A two- tailed chi-square test with Yates’ correction was used for categorical variables, and the Student’s t-test for continuous variables. Results: There was a statistically significant association between the development of OH and both greater age and late onset of Parkinson’s disease. Patients in the group with OH were older on average (76.11 ± 9.41 vs 65.9 ± 11.03; p = 0.04 and Cohen’s d = 0.99) and had later disease onset (71.44 ± 8.07 vs 60.9 ± 12.87; p = 0.04 and Cohen’s d = 0.98). The correlations between the other clinical and therapeutic characteristics and OH was not statistically significant. Conclusion: Our findings show that OH is more likely to affect older patients and those with later onset of Parkinson’s disease.

Parkinson’s disease (PD) is the second most common neurodegenerative disorder among the elderly after Alzheimer’s disease. It affects around 1% of the population over 65 years of age and has a prevalence of 4% or more among individuals over the age of 85 years [1]. The condition is primarily a result of a progressive, chronic loss of dopaminergic neurons in the substantianigra and striatum and presents with or without intracytoplasmic Lewy body deposits [1-3]. In around 95% of cases a monogenic etiology is not found.In these cases the condition is known as sporadic or idiopathic PD and occurs as a result of interaction between a series of hereditary and environmental factors [3].

Bradykinesia, tremors, rigidity and are the main motor signs of PD [4]. PD also presents with a series of non-motor manifestations, including changes in behavior, cognition, learning and the autonomic nervous system. Dysautonomias are great complications of PD.Examples of these include orthostatic (postural) hypotension (OH), constipation, anhydrosis, erectile dysfunction, sialorrhea, dysphagia, esophageal dysmotility, gastroparesis, irritable bladder symptoms and nocturia. OH can be a result of the disease itself or of the treatment for the disease [5-8]. It is considered the most incapacitating autonomous dysfunction of Parkinson’s disease [5] and is an important morbidity factor in the elderly, leading to falls, fractures and different types of trauma [7].

The aim of this study was to identify clinical variables associated with OH in PD patients.We sought to identify those variables which, when present, would make the patient look for treatment to prevent the morbidity and mortality caused by this condition.

Twenty patients were selected from the neurogenerative disease outpatient unit in the neurology service at the Hospital Universitário dos Campos Gerais (HU-SUPG). Patients were only included if they had a confirmed diagnosis of PD according to the Parkinson’s Disease Society Brain Bankcriteria (confirmed at the first assessment by at least two of the authors) and were receiving treatment and regular follow-up [8]. Patients with parkinsonism-plus, parkinsonism in heredodegenerative diseases or secondary parkinsonism were excluded, as were patients who were using dopamine agonists and those who refused to sign the voluntary informed-consent form.The local ethics committee (COEPUEPG) approved the study.

Patients were asked not to take their morning dose of medication on the day of their appointment. A standard questionnaire was completed for each patient to record their clinical history and details of their treatment. A physical examination was carried out to confirm the diagnosis. Patients were classified according to the stage and severity of the disease using the Hoehn and Yahr [9] scale and the motor part of the UPDRS scale [10]. Next, patients were examined for the presence of OH by measuring their blood pressure in the supine and standing positions. Care was taken to ensure that measurements were taken no more than 3 minutes apart. OH was considered to be a drop of at least 20 mmHg in systolic blood pressure and/or a drop of at least 10 mmHg in diastolic blood pressure as a result of a change from a supine to a standing position [11].

Patients were then divided into two groups:those with OH (n=9) and those without the condition (n=11). The groups were compared in terms of parameters such as age, age of onset of symptoms, duration of levodopa use, duration of the disease before levodopa was started, clinical manifestations at the time of diagnosis and of the assessment, and other medications being used. A two-tailed chi-square test with Yates’ correction was used for categorical variables, and the Student’s t-test for continuous variables. The effect size was analyzed using the odds ratio for categorical variables and Cohen’s d coefficient for continuous variables (0.2 – weak effect; 0.5 – moderate effect; and 0.8 – strong effect). P values of less than 0.05 (p<0.05) were considered statistically significant. 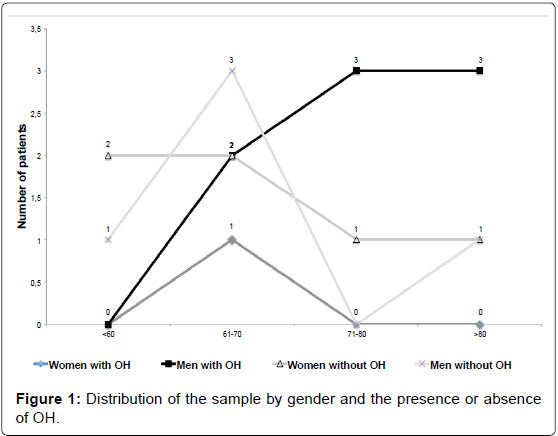 Figure 1: Distribution of the sample by gender and the presence or absence of OH.

Table 1: Comparison of the clinical manifestations of patients with and without OH at the time of the assessment.

Table 2: Comparative analysis of PD patients with and without OH.

OH in isolation is also age-dependent in the population at large, so that it would be expected to be more prevalent in more elderly individuals [16,17]. Various changes can lead to poor control of blood pressure in this population and could explain the greater prevalence of OH in this group. These include reduced baroreflex sensitivity, reduced response to sympathetic stimulation, kidney conditions resulting in loss of water and sodium and reduced end-diastolic volume due to poor cardiac chamber compliance [17]. Although this close relationship with age is known, it remains to be elucidated whether factors in the pathophysiology of PD could act as additional elements contributing to the appearance of OH.

Although not shown in our study, other authors have shown that OH is more frequently observed in patients with longer disease duration regardless of age [5,12,16]. Similarly, patients with more advanced PD (i.e., with a higher Hoehn and Yahr [9] score and higher UPDRS total score) present with OH more often [12,18,19]. This lends weight to the claim that the presence of OH is a consequence of the evolution of the disease itself rather than of older age alone.

The pathophysiology of OH is not yet fully understood. It is known that when patients with PD and dysautonomia stand up, a failure of vasomotor reflexes occurs both centrally and peripherally [20]. It has also been shown that in PD patients with OH, lower noradrenaline concentrations are found in plasma and in the nerve endings of sympathetic postganglionic fibers [5,12,21].

Another piece of well-founded evidence is the invariable finding of reduced sympathetic innervation of the left ventricle (LV), which progresses to diffuse sympathetic denervation, in patients with PD and OH [20,21]. This relationship is so striking that in patients with central neurodegeneration and OH but with intact innervation of the LV, a diagnosis of PD can be discarded [21].

In addition, degeneration due to Lewy bodies is present in the autonomic system at various levels.This could be one of the causative factors of OH in PD. The locus coeruleus, hypothalamus and the dorsal nucleus of the vagus appear to be affected. Peripherally, the sympathetic ganglia and cardiac, myenteric and parasympathetic submucosalplexi also appear to be involved and to contribute to the symptoms [22,23].

In the present study, all patients used levodopa daily regardless of whether they had OH or not, and patients who used dopamine agonists were excluded because this group of drugs is known to cause OH. Dopamine-related drugs are known to be able to cause peripheral vasodilation either directly or indirectly and can lead to a worsening of the OH symptoms. This would suggest that treatment of PD could also cause this phenomenon [23]. Another anti-parkinsonian drugs, amantadine, has been demonstrated as a potential cause of OH. Although the difference was not significant, there were a greater number of patients treated with amantadine in the group with OH. In future studies, the criteria in excluding dopamine agonists’ users should be with patients using amantadine or even COMT inhibitors, which may have a preventive factor on the OH [24].

There were no differences between two groups related to use of levodopa. However, the group without OH started to take levodopa early. OH has been documented as a potential side effect of levodopa therapy since its early use on PD [25]. On the other hand, a recent study failed to demonstrate the use of levodopa as a factor related to OH [24]. Levodopa appears to be safe in terms of neuronal injury and its suitability for use in the early stages of PD was recently reaffirmed [26].

Factors related to OH have been insufficiently studied in PD so far [24]. In agreement with the results of this study, SAH does not appear to be either a risk factor or protective factor for the development of OH in PD patients [12]. The renin-angiotensin blockers and beta-blockers do not seem to have influence on the OH in PD. Diuretics, not used by patients in this study, are the antihypertensives that could cause OH in patients with PD [24].

No statistically significant difference in terms of the first manifestation of PD was observed between the groups with and without OH. Hence, it cannot be concluded that there was any initial symptom or manifestation at the time of the assessment that would predict the development of OH.

In this study we observed that there is a greater prevalence of OH in more elderly patients and in those in whom PD had a later onset. We suggest that greater importance be attached to assessment of OH in these patients as it is an important morbidity factor in elderly patients. Further prospective studies are warranted to clarify the factors related to OH in PD patients, e.g., protective and deleterious effects of antiparkisonian therapy.