Parosteal Osteosarcoma of the Proximal Tibia in a Pregnant Patient

Parosteal Osteosarcoma of the Proximal Tibia in a Pregnant Patient

Parosteal osteosarcomas (POS) are a rare subset of surface osteosarcomas that originate from the periosteum. POS presents most commonly in young females between the ages of 20-30 years and most frequently in the posterior aspect of the distal femur [1]. They are classically low-grade, slow growing tumors that are well-differentiated with malignant osteoid formation and a spindle cell stroma on histology [2]. The prognosis for POS is generally favorable with a high survival rate (80%-90%) when negative margins are obtained [3]. The work-up of POS requires an algorithmic approach including clinical exam, imaging, and tissue biopsy. Clinical presentation typically includes symptoms of local swelling, pain, and limitations in range of motion of adjacent joints [1]. X-rays classically show large lobulated exophytic, osseous lesions projecting from bone cortex that have a tendency to grow circumferentially and MRI can detect soft tissue or intramedullary invasion [4]. Incisional biopsy is required to confirm diagnosis and guide treatment as POS generally require wide resection. This differs from other osteosarcomas that generally require neoadjuvant and adjuvant chemotherapy in combination with surgical resection. POS are generally resected with wide surgical margins to prevent complications of local tissue and bony invasion, recurrence, and systemic metastasis [5]. Surgical planning for POS depends on grade, size, and location of the tumor as more extensive tumors may require bony reconstruction in addition to resection.

A 23-year-old female patient presents with a right proximal tibia mass with complaints of pain and functional deficits. She initially noticed a superficial “bump” over the anterior aspect of her proximal tibia while she was still in high school. However, she states that the mass increased in size and the symptoms progressed considerably during her pregnancy and post-partum. At the time of our exam she describes her pain as sharp and aching. Additionally, she endorses locking of her knee, and numbness in the dorsal aspect of her foot and toes with leg extension. She also has difficulty walking or rising from a seated position. Review of systems was negative for weight loss, chills, fever, or other constitutional symptoms. 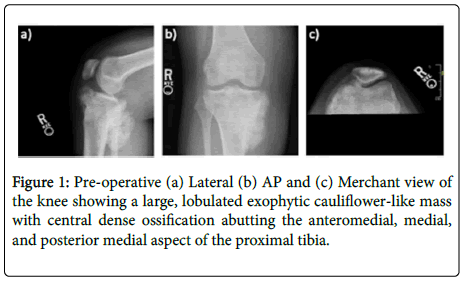 Figure 1: Pre-operative (a) Lateral (b) AP and (c) Merchant view of the knee showing a large, lobulated exophytic cauliflower-like mass with central dense ossification abutting the anteromedial, medial, and posterior medial aspect of the proximal tibia. 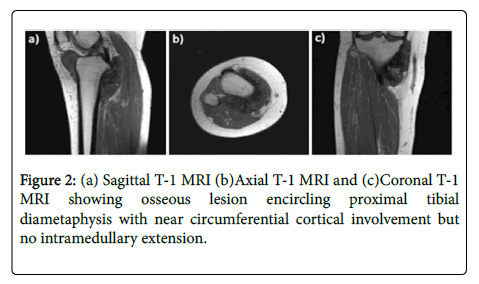 The surgical procedure was performed through anextensile medial parapatellar approach which was placed in line with our previous incision to ellipse the previous incisional biopsy tract en bloc with the specimen. The approach extended from the distal anteromedial leg leaving adequate tissue to perform a medial gastrocnemius flap and extended proximally into a medial parapatellar arthrotomy with a sub-vastus exposure allowing adequate exposure and margins of the tumor. The arthrotomy was carried distally to the point where the patellar tendon was known to contact the tumor based on the pre-operative MRI.

Circumferential dissection was then performed around the proximal tibia from anteromedial to posteromedial. The hamstring tendons were tenotomized at the level of the pes anserine with care to not inadvertently injure the saphenous nerve. The medial collateral ligament, anterior cruciate ligament, and posterior cruciate ligament were released as well in order to further mobilize the tibia. The origin of the medial gastrocnemius was preserved in this process. The patellar tendon dissection was then carried out from proximal to distal leaving a small portion of the most medial aspect of the tendon with the specimen as a margin. The majority of the patellar tendon was able to be saved with a close but grossly negative margin. The tendon was then released from the tibial tubercle and reflected laterally to be incorporated into the mega prosthesis later in the procedure. From here the anterior compartment fascia was divided off the anterolateral tibialcrest from anterior to posterior. The anterior neurovascular bundle was mobilized at the lateral intermuscular septum and the interosseous membrane was released off the posterolateral aspect of the tibia and then dissection was again carried posteriorly. The posterior musculature was reflected off the backside of the specimen itself, taking care to maintain a mobile layer of tissue as a margin, and then the dissection converged around the fibular head releasing the proximal tibiofibular ligaments.

Prior to this dissection, the distal osteotomysite was identified at approximately 11 cm from the joint surface with dissection planned with this in mind. Upon completion of the dissection, this bone cut was created saving a small cuff of periosteum for overlay onto the prosthetic collar. The margins were then circumferentially inspected and were felt to be grossly negative and the specimen was placed on the back table (Figure 3). The wound was copiously irrigated and meticulous hemostasis was confirmed. Attention was then directed towards preparation for the mega prosthesis. The femoral preparation was carried out first. Intramedullary access was achieved with a drill at the appropriate starting point anterior to the PCL insertion and the distal femoral cut was created with the referencing jig. Anterior and posterior femoral cuts and chamfers were then made for the femur body component with an estimated 3 degrees of external rotation and the box was prepared in the standard fashion. The femoral trial was then placed onto the cut surface of the distal femur. Attention was then directed towards the tibia using a tapered reamer to ream a final diameter of 13 mm in the tibia. The tibial trial was assembled in place after planning the cut surface of the distal tibia and the trial was assembled. We then assessed leg length and soft tissue balance, which was felt to be appropriate and then the trial components were removed.

Attention was then redirected for prosthetic implantation. The components were definitively installed in standard fashion and were then re-articulated using the associated polyethylene bushings and axle components. The knee was carried through arrange of motion to insure satisfactory range of motion. The patellar tendon was secured to the prosthesis using the prosthetic spiked plate and associated machine screws. This achieved excellent reattachment of the patellar tendon to the device itself. Attention was then directed towards inset of the medial gastrocnemius flap. The flap was positioned over the body of the proximal tibial prosthesis. The wound was once again copiously irrigated. The flap was inset using multiple #1 Vicryl pop-off sutures to achieve complete coverage of the mega-prosthesis. The fascia was then closed using multiple interrupted #1 Vicryl sutures over a 15-French Blake drain exiting in-line with the distal skin incision. Subcutaneous tissues and the deep dermal layer were re-approximated using multiple # 2-0 Monocryl sutures. The skin was closed using a combination of interrupted and running 2-0 Prolenesutures. The drain was secured using a 2-0 Prolenesuture. A sterile modified bulky Jones dressing was applied over mupirocin ointment on a non-adherent dressing.

Post-operative x-ray confirmed a well-placed implant with no evidence of loosening or mal positioning (Figure 4). Post-surgical pathology confirmed a 12.0 cm parosteal osteosarcoma (grade 1-3) at the surface of the tibial metaphysis with negative margins. Her post-operative course was uncomplicated, and she was discharged post-op day 4 with knee brace in full extension to 30 degrees. At 3 months follow up, she has a well-healed incision, active ROM of 20-85 degrees, passive ROM 5-90. 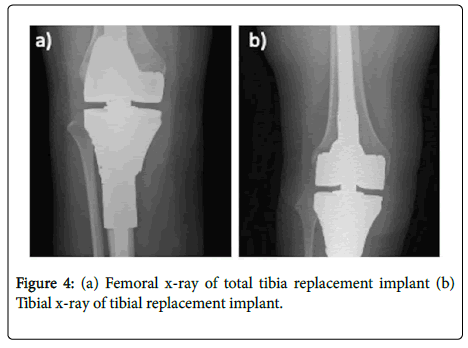 Our patient had noted the presence of a mass prior to pregnancy, although her symptoms and the size of the mass rapidly progressed during the peri-partum and post-partum periods. While certain bone tumors such as osteosarcoma, Ewing’s sarcoma, and chondrosarcoma have known associations with pregnancy, to our knowledge there is not currently literature supporting a relationship between POS and pregnancy [6].

In our patient, physical exam and imaging revealed an osseous circumferential bony mass of the medial tibia plateau. Radical resection with proximal tibia replacement (PTR) was indicated due to significant involvement of the medial plateau requiring significant bone removal. More conservative procedures such as hemicortical resection with bony allograft may be considered in select patients with lesions that do not involve any neurovascular bundles and would allow for more than one third of the bony circumference to be preserved [1]. However, marginal resections and intralesional excisions are associated with high recurrence rate. After resection, it is important to consider limb salvage and preservation of knee ROM. Homogenous massive grafts have been attempted post-tibial resection with low success and high graft resorption and fracture rates [7].

Thus, we opted for proximal tibia replacement with a hinged device for increased stability after extensive bony and soft tissue removal. A medial gastrocnemius flap was attached to the implant for soft tissue coverage. In our patient, radical resection with PTR successfully treated her primary POS and allowed for optimal outcomes in regard to limb salvage and knee function. Her low-grade well differentiated tumor did not require chemotherapy, though high-grade tumors should may require additional adjuvant chemotherapy. Patients should continue to be monitored with serial imaging and exam for recurrence of tumor, distant metastasis, and implant function.

We would like to thank the Texas A&M College of Medicine and the Department of Orthopedic Surgery at Baylor Scott and White Medical Center-Temple.

The authors report no conflicts of interest.

Copyright: © 2020 Liu J, et al. This is an open-access article distributed under the terms of the Creative Commons Attribution License, which permits unrestricted use, distribution, and reproduction in any medium, provided the original author and source are credited.