Solar energy is a very large, inexhaustible source of energy. The power from the sun intercepted by the earth is approximately 1.8 × 1011 MW, which are many thousands of times larger than the present consumption rate on the earth of all commercial energy sources. Thus, in principle, solar energy could supply all the present and future energy needs of the world on a continuous basis. This makes it one of the most promising of the unconventional energy sources. Photovoltaic (PV) is a method of generating electrical power by converting solar radiation into electricity directly using semiconductors that exhibit the photovoltaic effect. Photovoltaic power generation employs solar panels composed of a number of solar cells containing a photovoltaic material. Mainstream materials presently used for photovoltaic include mono-crystalline silicon, polycrystalline silicon, amorphous silicon, cadmium telluride, and copper indium gallium serenade/sulphide. Mono crystalline and polycrystalline solar cell having leading market share with 15%-17% efficiency. PV system is clean and safe for environment with comparison to coal and fossil fuel [1]. Conventional mono crystalline can operate efficiently at lower concentrations (1- 100 sun) without needing active cooling system. Gallium arsenide and multi-junction cells are better used in medium-high concentration systems (100-300 sun, 300 sun and above) [2-4]. Concentrated Photovoltaic (CPV) technology uses optics such as lenses or curved mirrors to concentrate a large amount of sunlight onto a small area of solar photovoltaic (PV) cells to generate electricity. Compared to non-concentrated photovoltaics, CPV systems can save money on the cost of the solar cells, since a smaller area of photovoltaic material is required. Because a smaller PV area is required, CPVs can use the more expensive high-efficiency tandem solar cells. Zhang et al. [5], develops the equations to calculate the monthly extra-terrestrial irradiation, monthly average clearness index, the daily total irradiation, and the direct irradiation. Koussa et al. [6], investigate the effect of different sun tracking mechanisms on the flat plate photovoltaic system. 2 axis tracking system shows higher result compared to 1 axis tracking system on flat plate photovoltaic system. Figure 1 shows the one axis and two axis tracking system [7,8]. 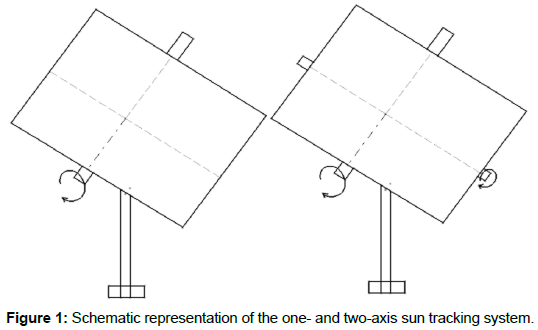 Figure 1: Schematic representation of the one- and two-axis sun tracking system.

Maatallah et al. [9], speaks on sun-earth geometric relationships and incidence angle, equation of time, latitude and longitude, solar time and hour angle, zenith, solar altitude, azimuth, surface azimuth and slops angle, information about extra-terrestrial solar radiation and radiation on horizontal surfaces like, global radiation and diffuse radiation. The yearly gain made by a module mounted on a single-axis tracking system relative to a fixed panel installed with the yearly optimal tilt angle. In order to more optimize the solar system exploitation, a dual-axis tracking installation can be used [10-20].

India’s theoretical solar potential is about 5000 T kWh per year (i.e., ~600 TW), far more than its current total consumption [21,22]. Currently solar power is prohibitive due to high initial costs of deployment. However India’s long-term solar potential could be unparalleled in the world because it has the ideal combination of both high solar insolation and a big potential consumer base density [23,24]. With a major section of its citizen still surviving off-grid, many other areas need to connect to the grid system in India. Availability of cheap solar can bring electricity to people, and bypass the need of installation of expensive grid lines. In addition, a major factor influencing a region’s energy intensity is the cost of energy consumed for temperature control. Since cooling load requirements are roughly in phase with the sun’s intensity, cooling from intense solar radiation could make perfect energy-economic sense in the subcontinent, whenever the required technology becomes competitively cheaper.

The design of whole system is done by considering the size of PV cell (15 × 15 cm) having power output 2W. Concentrated solar systems use mirrors or lenses to concentrate a large area of sunlight onto a small size PV cell, generates the power which equals to the power produce by large size PV cell. In CPV (concentrated photovoltaic), the concentrated sunlight energy is converted directly to electricity via the photovoltaic effect. 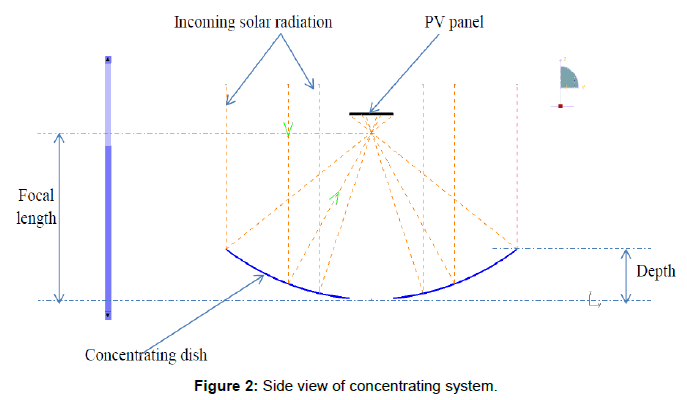 Figure 2: Side view of concentrating system. Solar hour angle is used for tracking of sun throughout the day. The sunrise equation as follows can be used to derive the time of sunrise and sunset for any solar declination and latitude in terms of local solar time when sunrise and sunset actually occur [9]. Figure 3 shows the schematic of angles ω, Φ and δ.

Φ is the latitude of the observer on the Earth.

δ is the sun declination.

Solar declination angle is used for tracking the sun throughout the year.

Where n is day

The output of PV module is depends on operating ambient temperature, intensity of irradiance and the incident angle of incoming solar radiation. King et al. [24] developed the correlation of this factor with the performance of PV module. The relative efficiency of PV module is a function of module temperature and solar irradiance [25,27-29].

Where, TNOCT is a nominal operating call temperature of PV module? For freestanding modules, this value is normally given as 48°C [30].

The instantaneous power output of a PV module under actual operating conditions is expressed as:

Where, Pk(kWp) is the PV module’s rated peak power.

For an hour characterized by an hour angle, ω, the monthly average hourly irradiation on a horizontal surface, ?I (kWh/m2) for the characteristics day of each month was obtained with:

Where, ?H is monthly average daily irradiation on horizontal surface and rt is the ratio of hourly to daily irradiation. rt was gotten with the collares-Pereira and Rabl equations as follow [31,32].

Where a and b are given by:

The spectral (beam) component of the hourly irradiation on a horizontal surface ?Ib is related to ?I and ?Id by: 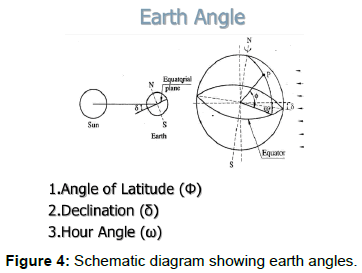 The performance is measured by comparing the output between PV cell in stationary condition and PV cell incorporate with tracking and concentrating systems. Experiments are conducted on 29th, 30th April, and 1st May on PV cell incorporate with tracking and concentrating system and 2nd, 3rd, 4th May 2014 on PV cell when placed stationary, continuously 6 days in the month of April and May, where mostly direct sunlight is available for getting better performance result (Tables 1-6). 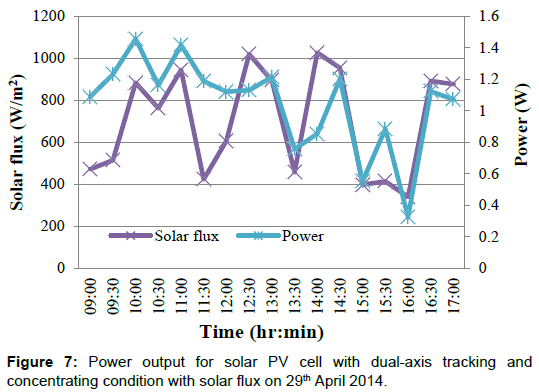 The output of three days as power, depends on incoming solar flux is shown in Figure 7, whenever the solar flux increases, the power output is also increase. However, sometimes it sees that there is decrease in power even with high solar flux due to increases in the temperature of PV cell. For Monocrystaline PV cell, the maximum operating temperature is 60°C. If temperature of PV cell is going higher than 60°C, directly affects the efficiency of PV cell, starts to decrease. On 29th at 14:00 h and on 30th at 11:30 h there is decrease in power due to the higher temperature of PV cell. Output of PV cell is higher when there is a solar flux in the range of 400 W/m2 to 600 W/m2. By the use of concentrator (having concentrating ratio 40), increases the amount of solar irradiation falling of PV cell even if there is low solar irradiation is available on horizontal surface, shows in Figure 6 at 11:30, Figure 7 at 5:30 and in Figure 8 at 15:00 due to the cooling system. 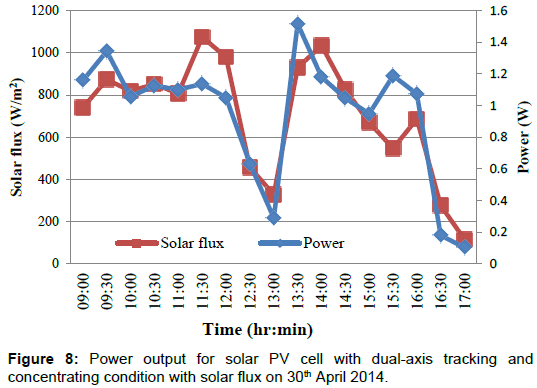 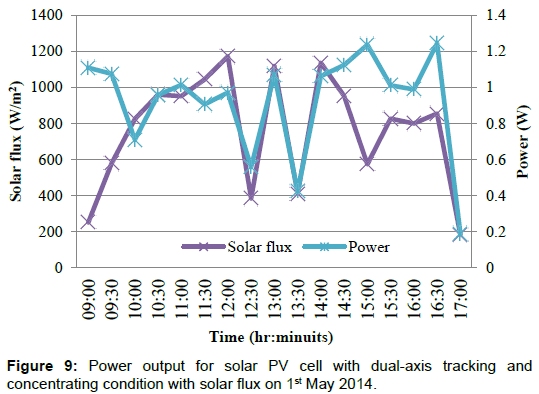 Figure 9: Power output for solar PV cell with dual-axis tracking and concentrating condition with solar flux on 1st May 2014. 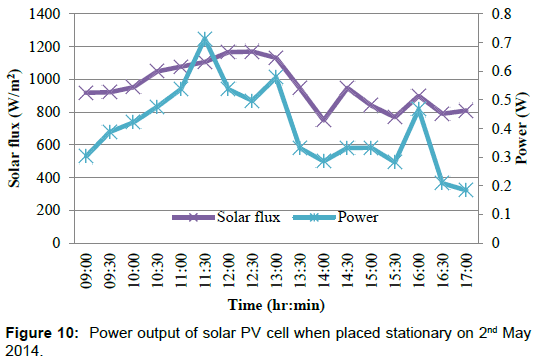 Figure 10: Power output of solar PV cell when placed stationary on 2nd May 2014. 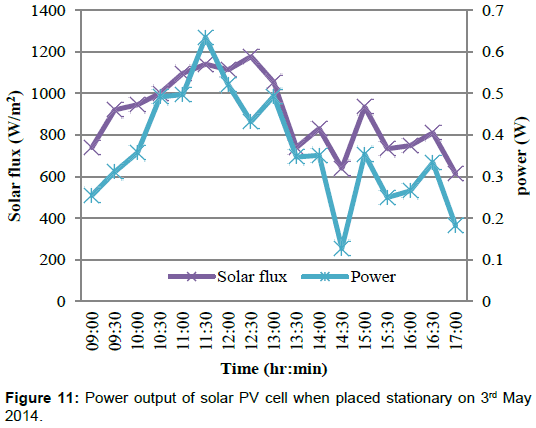 Figure 11: Power output of solar PV cell when placed stationary on 3rd May 2014. 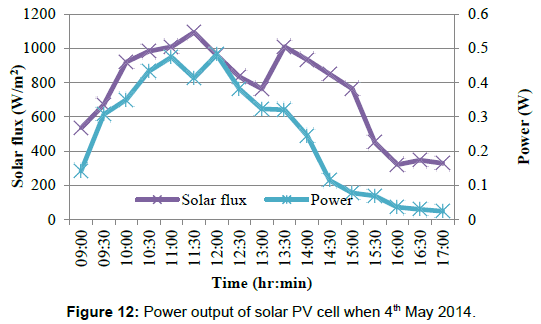 As seen above, even with tracking and concentrating system the maximum power output is only 1.2 W, which is very less as compare to its rated power due to:

• High temperature of PV cell, and other losses.

• Heat is not conducting from PV cell to cooling system due to the silicone paste.

Temperature of PV cell is increasing very rapidly but cooling system is not working effectively which directly affects the efficiency of PV cell (Figures 14 and 15). 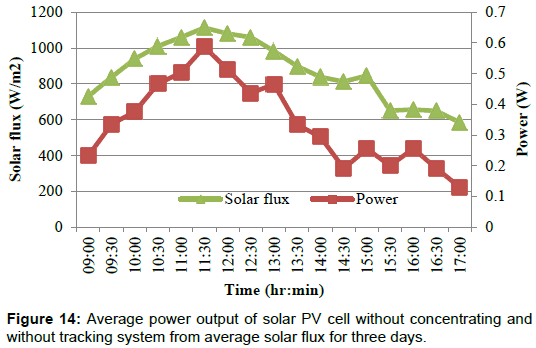 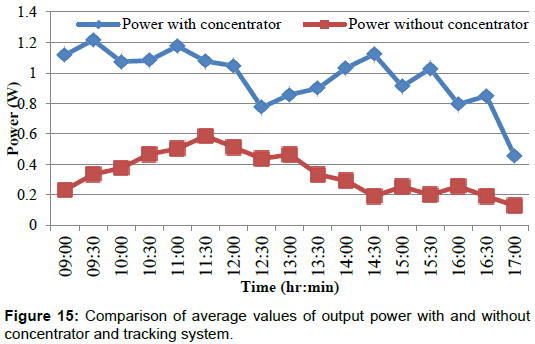 Figure 15: Comparison of average values of output power with and without concentrator and tracking system.

It is to be noted that all the readings taken during the experiment are instantaneous after and interval of each half hour.

• Tracking is more effective in those hours in which the intensity of solar flux is approximately more than 400 W/m2.

• The current generated by the solar panel is very much dependent on the solar insolation.

• When the temperature of PV cell is increasing immediately, the values of voltage and current are reducing.

• The maximum power by PV cell with concentrating and tracking system is 1.51716 W.

• The maximum power by PV cell without concentrating and tracking system is 0.71377 W.

Copyright: © 2017 Jagtap S, et al. This is an open-access article distributed under the terms of the Creative Commons Attribution License, which permits unrestricted use, distribution, and reproduction in any medium, provided the original author and source are credited.