Copyright: © 2017 Yaseen M, et al. This is an open-access article distributed under the terms of the Creative Commons Attribution License, which permits unrestricted use, distribution, and reproduction in any medium, provided the original author and source are credited.

The use of titania-silica materials in photocatalytic processes has been proposed as an alternative to the conventional TiO2 catalysts, in order to facilitate the separation of products after the reaction. However, despite the large number of research in this field, the mechanism governing the photocatalytic activity of the mixed TiO2/SiO2 oxides is not clear. Titania-Silica nanocomposite xerogels were prepared by sol-gel method. This work has been used to describe the synthesis and the photocatalytic properties of TiO2-SiO2 nanocomposite xerogel. The nanocomposite xerogels were prepared by keeping the molar ratio of TEOS:TTIP:MtOH:DIW at 1: 1:6:14 respectively and the catalysts used were HCl and NH4OH. After the preparation xerogels were characterized by FTIR, XRD, UV and LLS. All these techniques show the amorphous nature of Titania-silica xerogel.

TiO2 is well recognized as a valuable material with application as a white pigment in paints, as filler in paper, textile and in rubber/plastics [1]. Due to low cost, non-toxicity, stability and other best characteristics TiO2 attracts a great attention. TiO2 has wide applications in various fields like antireflection opticals, coatings, waste water purifications, catalyst supporting, ceramics senser element, as a photocatalyst, in electric devices like (in lithium based battery), as a base in high quality paints, paper, plastics [2]. Titania has excellent biocompatibility with respect to bones implants and applications in electrochromic devices [3]. Titania shows good photocatalytic applications due to which it gained tremendous demands and green energy and environmental protection. Many other oxides like iron oxides, zinc oxides etc. also shows the similar behavior due to photocatalytic activity of titanium dioxide it play a wide role in different fields like air, waste water purification, good UV blocking properties weakening of the organic fibers [4]. Silica doped in to the titania matrix increase the photocatalytic activity because the silica doping decrease particle size and also increase the specific surface area and thermal stability of titania particle towards anatase to rutile phase conversion [5]. SiO2- TiO2 materials are used in different fields like as catalyst supporting materials, acidic catalyst for many reactions, selective reduction, as an anti-reflective materials for coatings or sensing nanoimprints photonic crystals [6-9]. Dielectric mirrors and low loss waveguides solids of low thermal expansion coefficient, bioactive solids self-cleaning coatings solids of controlled acidity and photocatalysts [10-14]. The TiO2-SiO2 mixed oxides catalytic activity was studied and observed that the TiO2- SiO2 have better photocatalytic activity as compared to TiO2 and SiO2 which was confirmed through LLS and UV results.

The xerogels can be synthesized by Sol-Gel process in which metal alkoxide is used as a precursor source that undergoes catalyzed hydrolysis and condensation to get nano scale materials of that metal [15]. TTIP was used as a precursor and TEOS was added as an organic solvent. In this synthesis HCl and NaOH were used as catalysts.

TiO2-SiO2 xerogels was synthesized by Sol-Gel process. TEOS (Tetraethylorthosilicate) and TTIP (Titanium tetra isopropoxide) were used as precursor. It was observed that the TTIP hydrolysis rate is much faster than TEOS [16]. The synthesis consists of two steps. The first step is the synthesis of SiO2 sol, in which 1:6 TEOS and Methanol were mixed together i.e. 7 ml of TEOS and 43 ml of methanol. TEOS were added drop wise slowly to the methanol with continuous stirring. Then 0.05 mol L-1 HCl was added drop wise to the sol in order to adjust the acidic pH at 2. Then the sol was allowed to stirrer for about 2 an hour in order to get the homogeneous sol. In the second step TiO2 Sol synthesis, 1:14 solution of TTIP and DIW were mixed with continuous stirring until the homogeneous sol of TiO2 were obtained. Then in 1:1 of TiO2 and SiO2 sols were mixed with continuous stirring in order to get homogeneous sol and then 0.05 mol L-1 NH4OH solution was added to this mixture drop wise for the adjustment of pH. The pH of the homogeneous mixtures (sol) was observed by the pH-meter continuously. At last the mixtures (sol) were allowed to stirrer for some time to get the homogeneous mixture (sol).

In this method 3ml of TEOS, the silica precursor was taken in the reaction beaker and 6ml of ethanol was added dropwise with continue stirring. Further 3 ml of water, 4 ml of acetic acid and 3 ml of TTIP (Titania precursor) were added with continuous stirring for 15 min at room temperature. The prepared sol changed into a gel which was placed in the oven at 65 for 1 h which resulted in the conversion of gel in to xerogel.

The FTIR spectra of the synthesized nanocomposite (TiO2/SiO2) were recorded by Perkin Elmer series 100 FTIR spectrometer with a 5 cm-1 resolution. FTIR spectrum was recorded at 4000-450 cm-1. The absorption at 1074 cm-1 (Figure 1) is the characteristics peak for Si-O-Si. The peak observed at 801 cm-1 is due to Si-O-Si symmetric stretching. The broad absorption at 1633 cm-1 match with OH bending vibrations and is attributed to chemisorbed water. The well defined peak at 3441 cm-1 shows OH stretching vibrations. The peak observed at 923 cm-1 corresponded Si-O-Ti vibrations. The band observed at 450-610 cm-1 is due to Ti-O Stretching. 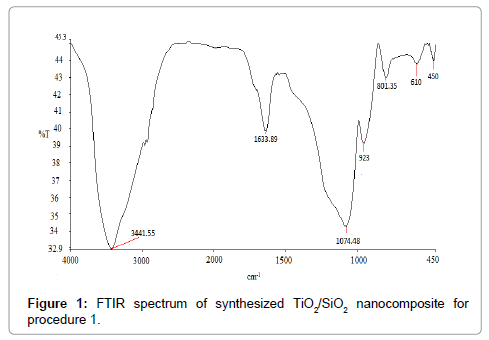 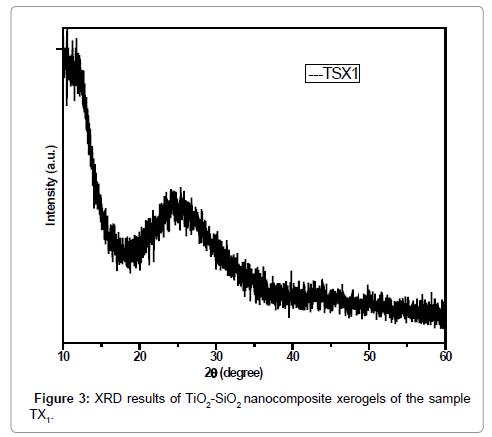 The XRD pattern of synthesized nanocomposites (TiO2/SiO2) was collected in the range of 10-60 2θ (degree) shown in Figure 4. The XRD patterns of the synthesized materials indicate that the TiO2-SiO2 nanocomposites are essentially non-crystalline and have amorphous structure which can be accomplished from the broad characteristic diffraction peak between 2θ ~ 20θ° and 30 θ°. 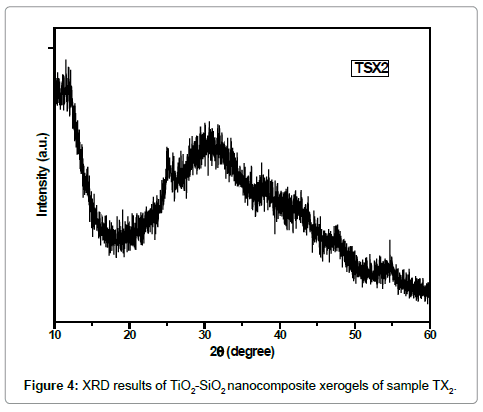 The Figures 5 and 6 also show the same XRD results of the synthesized TiO2/SiO2 nanocomposites. These samples were also synthesized by sol-gel method with different concentrations of precursors and solvents used. The hump in XRD pattern indicate that the TiO2-SiO2 nanocomposites are essentially non-crystalline and have amorphous structure which can be accomplished from the broad characteristic diffraction peak between 2θ ~ 20θ° and 30 θ° while the Figure 2 shows very low crystallinity at 2θ and 25 θ°. 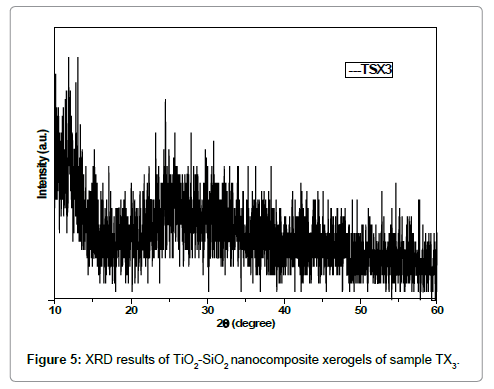 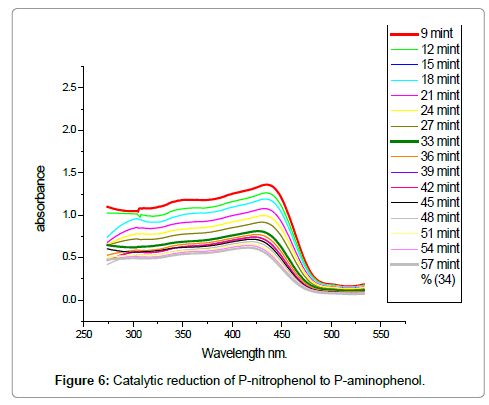 To check the catalytic activity of TiO2-SiO2 the p-nitrophenol was reduced by NaBH4 to p-aminophenol in aqueous medium. The procedure adopted was used as a given amount of mixed oxides was added to 1 ml of p-nitrophenol (0.08 mmol L-1) for initiation of reduction. For mixture preparation 1 ml of aqueous solution of NaBH4 (1.5 mmol L-1) was added to reaction chamber. The p-nitrophenol reduction was determined by studying the absorbance at 440 nm with respect to time. This reaction was selected due to simplicity and formation of single product. By using time dependence uv-vis spectra the reduction process was checked. The appearance of a new peak at 300 nm was observed which confirm the p-nitrophenol reduction to p-aminophenol which is shown in Figure 6.

The Figure 7 shows the SEM image of synthesized containing TiO2-SiO2. From SEM image, it is clear that in most part of the sample large particles is obtained, which gives the evidence of the agglorimation of small particles. Along large agglomarited particle small size individual particles can also be absorved. The EDX spectrum is showing the elemental composition of the three elements in different percentage which is silicon (Si) and titanium (Ti) and oxygen (Figure 8). The EDX spectra has confirmed all the constituents that were added in the synthesized sample. 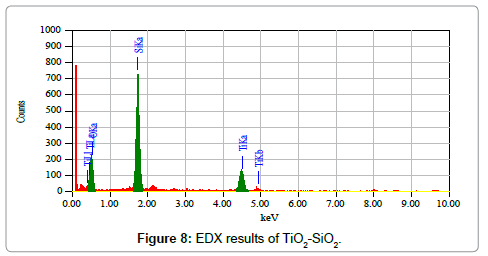 (TiO2/SiO2) nanocomposites were synthesized by sol-gel process where Tetraethylorthosilicate (TEOS) and Titanium tetraisopropoxide (TTIP) were used as precursors in the presence of organic solvent. The XRD results confirmed that the synthesized TiO2-SiO2 mixed oxide xerogel is non-crystalline and having amorphous nature. In the TiO2/ SiO2 nanocomposites, materials, in the amorphous SiO2 matrix TiO2 nanocrystals are present in highly dispersed form. The amorphous SiO2 and Ti–O–Si bond formation and TiO2-SiO2 mixed oxides give rise effectively stability of TiO2 anatase form. It also bound crystallites growth, significantly increase surface area. So, the increase in surface area caused the improvement in photocatalytic activity of TiO2-SiO2 mixed oxides nanocomposi[te xerogels. FTIR spectra show the presence of Ti-O-Si crosslinks and revealed interactions between TiO2 and SiO2 at a molecular scale. Ti-O-Si bonds and interactions may enhance surface properties, catalytic and photoactivity. The TiO2-SiO2 mixed oxides catalytic activity was also studied and observed that the TiO2-SiO2 have better photocatalytic activity as compared to TiO2 and SiO2 which was confirmed through LLS and UV results.