Methods: Data was analysed from 264 children aged 8-17 years who were hospitalised at Estonia's two children's hospital over a three-year period. In each case, the on-call paediatrician completed a special form about the clinical symptoms of AI. A blood sample was taken and serum was analysed for testosterone, estradiol, progesterone, cortisol, glucose, lactate, sodium, and potassium levels.

Alcohol consumption among children and adolescents is a growing problem in most industrialised countries [1-3]. As the frequency and amount of alcohol consumption has gradually increased, medical personnel at hospitals have had to become prepared for the corresponding increased workload. Biochemical tests, such as those for glucose, lactate and electrolytes levels have been used to study the clinical condition of children with AI. The studies performed in healthy adult volunteers [4-5] showed that hyperlactinaemia, hypokalaemia [6], hypernatraemia and hypoglycaemia [7], or hyperglycaemia do occur in AI. Hypoglycaemia has been found to be a severe problem in young children with acute AI [8]. Although it is not very common [9], it still requires careful examination. Hyperglycaemia can also occur in these children [9] as a result of the increased cortisol levels due to stimulation of the adrenocorticotropic hormone. The level of cortisol, one of the main stress hormones, is increased by various stress factors, including pain, inflammation, burns and scares. Some researchers have found an association between blood alcohol concentration and increased serum cortisol concentration [10-12], although others have not [13].

Many studies have investigated changing serum sex hormone levels in adults with AI, finding that a significant relationship exists between alcohol intake and serum sex hormones levels. Testosterone concentration has decreased [14,15] and estradiol concentration has not been affected by ethanol [16]. Increased progesterone levels have been found in alcohol-intoxicated women in the lutheal phase [16], but other studies have found decreased progesterone concentrations by ethanol [17]. We aimed to study the relationships among plasma testosterone, estradiol, progesterone and cortisol levels with plasma glucose, lactate, sodium, and potassium concentrations in children hospitalised with acute alcohol intoxication.

The study included all 8-17-year-old children hospitalised with acute AI at Estonia's two main children's hospitals - Tartu University Children's Clinic and Tallinn Children's Hospital - over a three-year period (Dec 2005-Dec 2008). No lower age limit was set; that is, all self-intoxicated by alcohol children were included. The upper age limit (17.9 years) was set by the children's hospitals. Alcohol intoxication was diagnosed by Diagnostic and Statistical Manual of Mental Disorders (DSM IV), and criteria were used for building up a medical assessment form. Upon hospitalisation, an anonymous encoded medical assessment form was completed by an on-call paediatrician. The medical assessment form included data about the child's mental status (consciousness, balance, speech, nystagmus), physical status (blood pressure, pulse rate, muscle tone), menstrual cycle in girls, consumption of alcohol (time, amount, repeatedly or first time) and the time of medical assessment. The on-call paediatrician was also asked to estimate the level of drunkenness through a clinical examination. However, this was sometimes complicated and the level of drunkenness could only be estimated by serum alcohol concentration. The children with AI were divided into three groups, based on their serum alcohol concentration: 0.21-1.49, 1.50-2.49 and =2.50 g/L. Blood samples were drawn for the measurements of serum alcohol, plasma cortisol and sex hormones level, glucose, lactate, sodium, and potassium concentrations. Urine samples were also collected in order to exclude the use of narcotic substances.

Biochemical tests were completed immediately after the collection of samples. Lithium heparin plasma was separated and kept at -20°C until hormone measurements were made within a three-month interval in the laboratory of Tartu University Hospital. Serum ethanol concentration was determined using the TDxFLx (Abbott Diagnostics) in both hospitals. At Tartu University Hospital, plasma glucose and lactate were determined by Cobas Integra 400plus (Roche), and potassium and sodium AVL 988-4 (Roche). At Tallinn Children's Hospital, glucose, lactate, potassium and sodium were determined by ABL 700 Radiometer (Radiometer Analytical). Both laboratories participate in the Lab quality control programme. Plasma cortisol, testosterone, estradiol and progesterone levels were measured by Immulite 2000 (Siemens Healthcare Diagnostics). Hormones laboratory participate in the RIQAS quality control programme.

The study was approved by the Ethics Review Committee on Human Research of the University of Tartu, and procedures were followed in accordance with the Helsinki Declaration of 1975, as revised in 1983.

From December 2005 to December 2008, 417 children and adolescents were hospitalised at the two hospitals with suspected AI. Twenty children were excluded because their serum alcohol concentration was below 0.20 g/L; according to the International Statistical Classification of Diseases and Related Health Problems X, they were considered to have not used alcohol or all of the blood alcohol was already eliminated by the time of alcohol measurement. Narcotic intoxication was confirmed with a rapid urine test in three children, who were also excluded. One child, a newborn baby with an alcohol concentration of 2.05 g/L, was excluded because she had not consumed alcohol by herself. One hundred and twenty nine children dropped out from the study group because they refused testing, there were mistakes in blood drawing, biochemical tests had not been conducted or the medical form had not been completed.

Data from the remaining 264 children was used in the analysis. The sample included 81 children from Tartu University Children's Clinic and 183 from Tallinn Children's Hospital. The mean age of children was 14.2 years (range 8.4-17.9 years). There were 154 boys, forming a male-to-female ratio of 1.4:1.

The age range was similar for girls across the different alcohol concentration groups, but the boys' age increased from one group to the next (Figure 1). 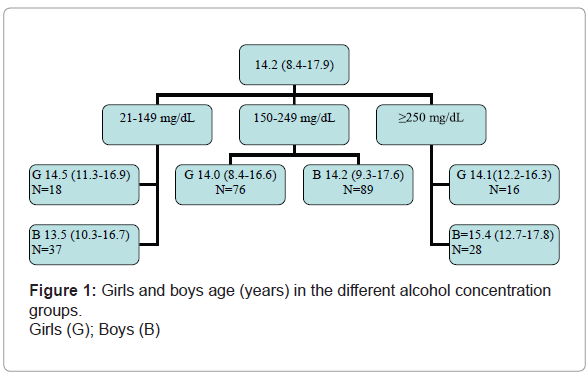 Table 1 shows the mean ± SD and range in brackets of serum ethanol and plasma glucose, lactate, potassium, sodium, and hormones concentrations of all subjects (n=264).

For the entire group, potassium and sodium were positively correlated with age in all children (r=0.3; p<0.05) and age correlated negatively with glucose and lactate (r=0.2; p<0.05).

In the group with serum alcohol concentration more than 2.50 g/L, increased age correlated positively with sodium and potassium (r=0.4; p<0.05). 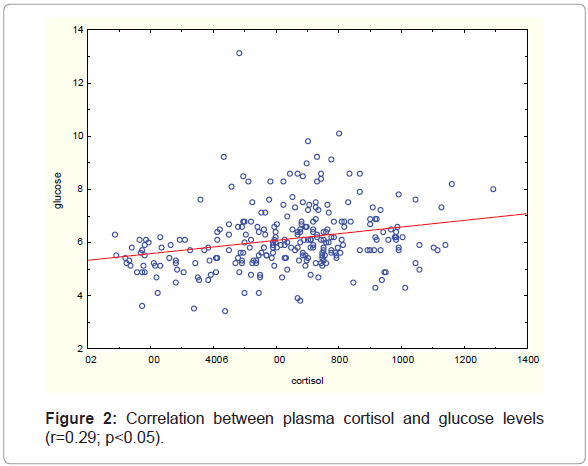 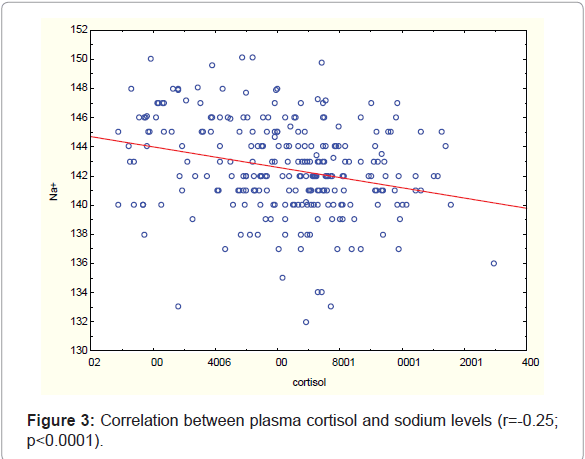 Alcohol consumption among children is a growing problem in Estonia. The present study involved a relatively large sample of drunken children hospitalised at two regional hospitals in Estonia over a two-year period. Although 32.8% of them dropped out from the study, mostly due to incompletely filled medical forms, the study population is still representative to describe the situation of acute alcohol intoxication in children admitted to hospital in Estonia.

The ratio of girls to boys (1:1.4) was akin to similar studies [18,19], which generally included more boys. The mean age (14.2 years) of drunken children in the study was similar to that in other studies [3].

In our study we've seen a tendency towards to higher glucose level. Alcohol may increase glucose levels through inhibiting the basal insulin secretion, from increasing cortisol secretion and enhancing gluconeogenesis from lactate [21]. Increased cortisol level is one of the most imported factors in the mechanism of increasing glucose level.

Hyperlactinaemia was a common finding in our children, which was a feature similar to the other studies [22,23]. One cause for the lactic acidosis is tissue hypoxia due to mild hypothermia or ethanol induced central nervous system depression and altered blood vessel tone [24]. The other possible reason for lactic acidosis is enhanced anaerobic glucose metabolism, which leads to an increased lactate production.

According to the plasma potassium reference values (3.5-5.1 mmol/L), there was a tendency towards hypokalaemia. Critically low potassium values, i.e. <2.8 mmol/L, were present in 3.4% of children (n=9) and required correction with a potassium infusion. This might result from ethanol-induced lactic acidosis and development of high glucose level, since these two factors may decrease the cellular level of potassium and its increased loss with urine and vomiting.

There was also a tendency towards mild hypernatraemia. The most likely cause for hypernatraemia is the water deficit from alcohol intoxication and hyperaldosteronism, which commonly occur at the absorption step of alcohol [25].

Potassium and sodium were positively correlated with age in all groups of drunken children and correlated negatively with glucose and lactate [9]. The possible reason for the correlations differences is that younger children were more affected by alcohol than older children.

The serum lactate concentration above 5 mmol/L has been considered to be dangerous, because such lactate levels have been associated with increased 3- and 30-day mortality levels in intensive care patients with acute alcohol intoxication [36]. In our study, there were 3 children with lactate levels above 5 mmol/L. Thus, although hyperlactaemia according to our study was not very common finding in children, it can be severe and therefore serum lactate level should be measured in every child with acute AI.

Acute alcohol intoxication has been shown to stimulate the hypothalamic pituitary adrenal axis and to increase plasma cortisol concentration [26-28]. For most of the children hospitalised at evening or night (from 5 p.m. to 2.30 a.m.; N=191), when cortisol secretion is normally very low, about half of the amount secreted in the morning. The majority of patients had plasma cortisol levels above 110-460 nmol/l, the maximum reference value for that time of day (4-7 p.m. 80-460 nmol/L; midnight 30-110 nmol/L) [29]. Pierucci-Lagha et al. [17] found no change in cortisol levels in adult volunteers with alcohol concentration of about 1.00 g/L. Other studies have found increasing cortisol level in humans acutely intoxicated with ethanol [15,30]. In our study, cortisol concentration was increased in all alcohol concentration groups. The most likely cause for rising cortisol levels is the stress situation of an organism from the depression of central nerve system by alcohol intoxication.

The study showed a positive correlation between progesterone and cortisol. Most progesterone in males is created during testicular production of testosterone, and most in females by the ovaries; it is also produced in the brain and by the adrenal gland, however, where progesterone is an indirect precursor to cortisol [31]. Like cortisol, progesterone is released in response to the adrenocorticotropin hormone (ACTH) [30,32].

Estradiol level was not correlated with alcohol concentration in our study, which was similar to the other studies [33].

Limitations. A statistical analysis of our study was limited from the high level of drop out (32.8%). In our study a lot of girls were in pre-menarche age or without regular menstrual cycle. Girls older than 13-14 years often were in medically serious health conditions and we didn't obtain information about their menstrual cycle.

In our further study we are planning to study the clinical signs and symptoms of acute AI in e different age and alcohol concentration groups in those children.

The study was funded by Estonian Science Foundation Grant No. 8256 and by a Basic funding grant from Tartu University (PARPA). Acknowledgements are due to the Tartu University Children's Clinic and Tallinn Children's Hospital for the cooperation in collecting data.

Copyright: © 2011 Tõnisson M, et al. This is an open-access article distributed under the terms of the Creative Commons Attribution License, which permits unrestricted use, distribution, and reproduction in any medium, provided the original author and source are credited.