Polycystic Disease of the Pancreas: A Case Report

Polycystic Disease of the Pancreas: A Case Report

Polycystic disease of the pancreas is a rare disease most often seen in association with polycystic kidney disease and Von Hippel Lindau syndrome. It is characterized by the presence of single or multiple simple congenital cysts in the pancreatic parenchyma secondary to developmental defects. These cysts are benign in nature and do not communicate with the main pancreatic duct. We report a case of an elderly male with autosomal dominant polycystic kidney disease incidentally detected to have multiple simple pancreatic cysts.

The estimated prevalence of asymptomatic pancreatic cyst is 2.2% on computed tomography and 19.6% on magnetic resonance imaging (MRI) [1,2]. Pseudocysts and cystic neoplasms of the pancreas such as serous cystadenoma, mucinous cystadenoma and intraductal pseudopapillary mucinous neoplasm constitute more than 95% of the pancreatic cysts. However, rarely cysts in the pancreas can be due to the developmental defects causing sequestration of pancreatic ducts leading to the formation of polycystic pancreas [3].

Polycystic disease of the pancreas (PDP) is a rare condition which mimics pseudocyst and cystic neoplasm of pancreas on radiological imaging. The exact incidence of this disease is not known. It has been found to be associated with polycystic kidney disease (ADPKD), cystic fibrosis and Von Hippel Lindau (VHL) syndrome [4-6]. In most of the cases, these cysts are asymptomatic [3]. However, if they are large in size, then can lead to symptoms secondary to compression of surrounding structures such as the main pancreatic duct, stomach [3,4]. We report a case of an elderly male with an incidental diagnosis of PDP in association with ADPKD.

A 83-year-old gentleman presented with chief complaints of loose stools and generalized weakness for one month. Physical examination was unremarkable. Colonoscopy revealed few small superficial ulcers in the terminal ileum. Biopsy from these ulcers showed nonspecific ileitis. Ultrasound of the abdomen suggested cystic lesion of 19 × 14 mm in the head and uncinate process of the pancreas.

Contrast-enhanced computed tomography of the abdomen showed the presence of multiple cysts throughout the pancreas with largest measuring 2.2 × 1.7 × 2.1 cm located in the head and uncinate process. There was no calcification, fat density or enhancing soft tissue component seen within the cysts. Rest of the pancreas was normal in outline and attenuation pattern. The main pancreatic duct was not dilated (Figure 1). In addition, multiple bilateral small renal cysts (5 cysts in each kidney) (Bosnaik type 1) and small ureteric calculi (3 mm on the right side and 1.9 mm on the left side) were present. A small 5 mm cyst was located in the segment II of the liver. Magnetic resonance imaging of the abdomen confirmed the presence of cysts in the liver, pancreas and kidneys.

These pancreatic cysts exhibited hypointense peripheral and hyperintense central signals on T2WI while peripheral isointense and central hypointense signals on T1WI sequences. There was no evidence of septations or calcification within these cysts. These cysts were located in the head, uncinate process, body and tail of the pancreas (Figure 2) In view of the above findings and ultrasonographic diagnostic criteria for ADPKD [7], diagnosis of ADPKD with co-existent pancreatic and hepatic cysts was made. The patient was treated medically for loose stools and was symptom free till the last follow up at one month (Figures 3 and 4). 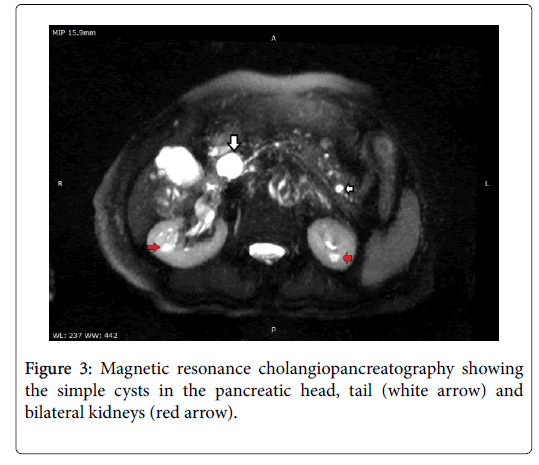 Polycystic pancreas occurs due to abnormal development of pancreatic ductal system secondary to ciliopathy [3,8,9]. Recent studies have revealed that deficiency of hepatocyte nuclear factor 6, and gain of function of Forkhead box-containing protein predisposes to the development of pancreatic cysts [8,9]. These cysts lack primary cilia similar to that seen in ADPKD [3].

Due to its benign nature, asymptomatic PDP with or without ADPKD do not require surgery or surveillance as seen in our case. However, the patients of PDP with VHL require regular radiological surveillance as they are likely to develop other complex cystic or solid masses during follow up [4]. Symptomatic pancreatic cysts can be treated by deroofing or resection. Pancreatic cysts with suspicion of malignancy should be resected.

PDP is a rare disease which should be included in differential diagnosis while evaluating a patient with pancreatic cysts. It is most frequently associated with ADPKD or VHL. Radiological imaging and cyst fluid analysis are very useful in differentiating these congenital cysts from pseudocyst and cystic pancreatic neoplasm.

Copyright: © 2018 Gupta R, et al. This is an open-access article distributed under the terms of the Creative Commons Attribution License, which permits unrestricted use, distribution, and reproduction in any medium, provided the original author and source are credited.