Copyright: © 2017 Tarnow E. This is an open-access article distributed under the terms of the Creative Commons Attribution License, which permits unrestricted use, distribution, and reproduction in any medium, provided the original author and source are credited.

Free recall, in which items in a list are displayed or read to subjects who are then asked to retrieve the items, is one of the simplest ways to probe short term memory. It is used in neuropsychological batteries to test for the presence of Alzheimer’s disease, for example, MMSE, ADAS-Cog, FREES, CVLT, DWR, etc. [1-5]. The corresponding serial position curve, the probability of recalling an item versus the order in which the item was presented, is u-shaped: items in the beginning of the presented list (primacy) and at the end of the list (recency) are more likely to be recalled than those in the middle of the list.

It was recently shown explicitly that free recall is a well-defined two stage process [1,6]. In the first stage working memory is emptied. In the second stage a different retrieval process occurs in which items are reactivated. Working memory is responsible for recency (and some primacy for short lists) and the second stage recall shows some primacy but no recency [7]. Found that a reduction in the primacy effect is an early and ubiquitous feature of the memory impairment of AD and Tarnow [3] showed that early Alzheimer’s disease correlates with a loss of items from the second stage. (As an aside, because this loss is very similar to the loss during acute cannabis usage, the intersection of the two presumably localizes the second stage of free recall to the CA1 area of the hippocampus.) In this contribution we explore what happens to the first stage of free recall in amnestic MCI, non-amnestic MCI and diagnosed Alzheimer’s disease.

Our tool is the Tarnow Unchunkable Test (TUT), a free recall test in which the items are constructed to be unchunkable. The items are double digit integers and presumably language independent. Three or four items are read to the subject by a nurse and the subject is asked to recall the items immediately.

One way is to dissect the very test used to diagnose Alzheimer’s disease. Previous studies of the cognitive components of Alzheimer’s disease examined the progress of the disease via a study of which items in the Mini-Mental State Exam (MMSW) fail and when they fail [14,15]. Ashford [14] reports that overall, the MMSE is the most sensitive 5 years after diagnosis and that at the time of diagnosis, multiple items fail a little – in other words some items are more sensitive to the stage at which an Alzheimer’s diagnosis is given but the differences are not great. This item response analysis allows for a better stage description but it only is as good as the items themselves. For example, the three item free recall test in the MMSE consists of items that can be chunked together; if a subject succeeds in such a chunking, the working memory capacity is overestimated.

Another way out of this dilemma is to create cognitive tests that are better defined than previous cognitive tests and hone in a particular cognitive component. TUT is such a test: it limits itself to the working memory content (the first stage of free recall) and does not allow for associations (the second stage of free recall) and also does not need any manipulation performed on the working memory content.

Participants were part of a clinical study for aging and dementia at the Alzheimer’s Disease Research Center at Icahn School of Medicine at Mount Sinai (ADRC ISMMS). Inclusion criteria included 65 years of age or older, primarily English/Chinese/Spanish speaking, visual and auditory acuity adequate for cognitive testing, willingness to participate in all clinical assessment, and having a study partner available as an informant. The demographics are displayed in Table 1.

All participants were asked to complete a 3-hour in-person dementia evaluation, which consisted of recording of demographic information, clinical interview, cognitive evaluation, medical examination and functional assessment. Upon completion of the evaluation, all participants were assigned a research diagnosis of normal cognition, Mild Cognitive Impairment (MCI) and dementia using Clinical Research Diagnostic Criteria employed at the ADRC ISMMS. The study was approved by the institutional board of the ISMMS. All participants provided signed informed consent.

Records indicating dementia due to oncology treatment and due to vascular dementia were discarded as was a record of a subject who refused to answer more than once.

The Tarnow Unchunkable Test [4] attempts to separate out just the first stage of free recall which empties working memory. It uses particular double-digit combinations which lack intra-item relationships, minimizing inter-item associative strengths [16], so that the second reactivation stage does not occur. The TUT is copyrighted and patent pending and can be purchased from Tarnow. It consists of 3-item tests and 4-item tests and can be done using paper, as was the case in this article, or by computer. It has been used on 500 Russian college students [8,9].

The main results will center on the TUT 3 item memory score (other results appear in the Appendix). The properties of the different cultures of the normal subjects are shown in Table 2. The TUT 3 and 4 item memory tests are culture independent. In the subject sample age and gender are evenly distributed among the cultures. The only cultural dependency we find is the educational level which is highest for English and Mandarin and lower for Cantonese and then for Spanish.

In Table 3, is shown that the TUT 3 item memory and 4 item memory is not correlated with gender. In Table 3 is shown that the TUT tests do not correlate with age or education. Interestingly, the TUT 3 and 4 item tests do not correlate much with each other. It was found elsewhere [8] that it is because the TUT 4 item test exceeds the capacity of most subjects’ working memory and the subjects do not manage their working memory efficiently under those circumstances (Table 4).

Table 2: ANOVA of the language groups show language independence of the TUT 3 and 4 item memory tests for normal subjects.  Educational level was significantly dependent upon the language. The language columns contain average, standard deviation, standard error and number of subjects.

Table 4: Regression shows the test results for normal subjects are independent of age and education and within the test only the TUT: 3 and 4-item tests are somewhat correlated.

Table 6: Average scores on TUT 3 item test for the different diagnostic categories.  The difference between AD and Normals is 0.6 items.

The serial position curves for the normal and AD populations for the TUT 3 item test are shown in Figure 1 (other serial position curves are in the Appendix). They show primacy and no recency [8]. The first item is not very affected by AD but the second and third items are much less likely to recall, reflecting the loss of 0.6 items from working memory (Table 9).

Total recall distributions for the TUT 3 item tests is shown in (Figure 2). The distributions for MCI (amnestic and non-amnestic) are similar to normal while the distribution for AD subjects is moved to a lower average value. The corresponding ROC curve is shown in Figure 3 and the area under the curve is 0.77. Figure 4 shows how the TUT 3 item score increases the odds of an AD diagnosis in the subject population. For the TUT 4 item test, the total recall distributions are much wider [8] which presumably explains why it is not sensitive to AD (Table 10).

That amnestic MCI is negatively correlated with education (Table 7) would seem to be in consistent with this view: education presumably allows for more associations which allow for more items to be reactivated during the second stage. It is also consistent with the idea of an “education reserve” [17]. Note that there is a medium sized dependency of the TUT 3 item test with academic field [10]; this was not investigated in the present article (Figure 6).

It could also be that the loss of working memory may be a good diagnostic milestone since it is well defined. It presumably corresponds to a stage in the [18] observations (Figure 8) That the TUT 3 item test displays gender and culture independency would suggest that it is a convenient test to use on multicultural populations – since the subject only needs to recall numbers there is no need for multiple copies of the test script. It also displays very weak dependency of age and education, further properties that are important for testing populations for physical diseases like Alzheimer’s disease that may be in part hidden by aging or educational attainments. 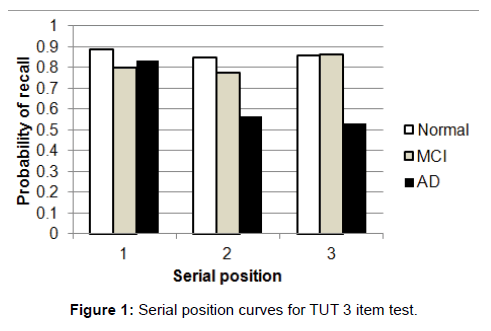 Table 9: Comparison of TUT with other tests attempting to distinguish AD subjects from MCI subjects. Only Spanish and English subjects were included for the MMSE since it had not been validated for Mandarin or Cantonese. 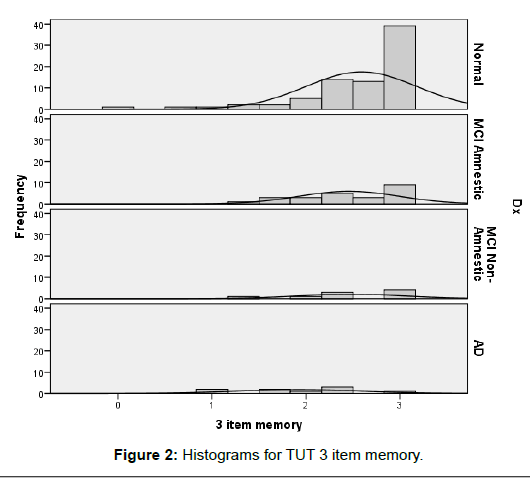 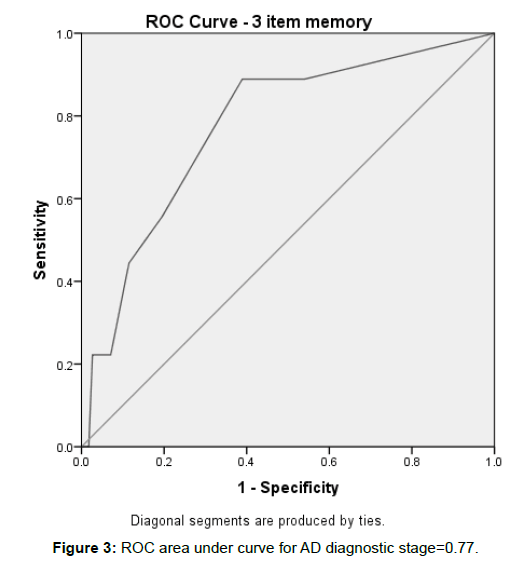 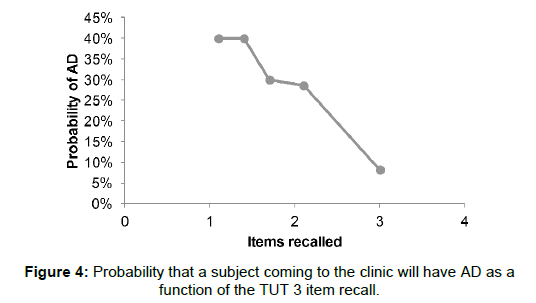 Figure 4:Probability that a subject coming to the clinic will have AD as a function of the TUT 3 item recall.

Table 10: Comparison of TUT with other tests attempting to distinguish 30 Normal AD subjects from 8 MCI subjects. Only Spanish and English subjects were included since the other tests had not been validated for Mandarin or Cantonese. TUT did not distinguish MCI from normal subjects. 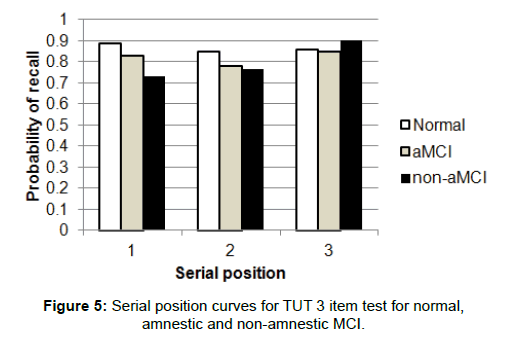 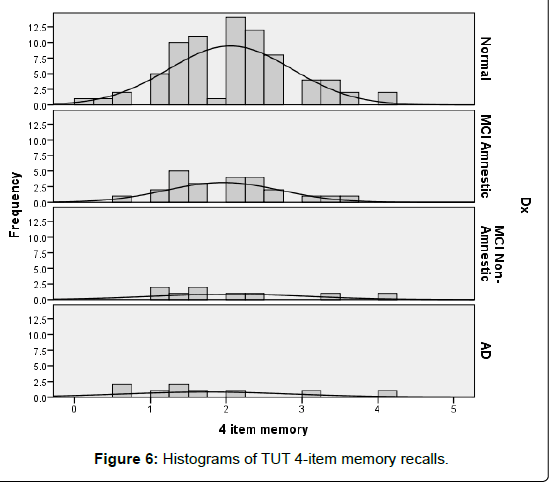 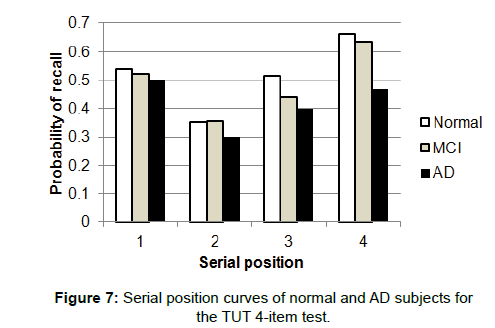 The testing of the subjects was supported by the AG005183 (PI: Sano). The author has no current financial stake in the TUT test but hopes that will change in the future. 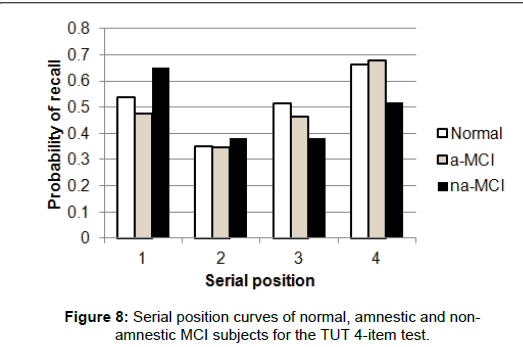