Biodiesel has become beguiling nowadays for it is environmental benefits and it seems an opposite alternative fuel for future. In the current study, the biodiesel was produced from Jatropha seed oil using sulphated zirconia as catalyst. The catalyst was characterized using Fourier transform infrared (FTIR), differential scanning calorimetry (DSC), X-ray diffraction (XRD), thermogravimetric analysis (TGA/DTA) and X-ray fluorescence (XRF). The GC-MS result of biodiesel produced shows 8.46% hexadecanoic acid, methyl ester, 10.41% 9-Octadecenoic acid (Z)-, methyl ester and 10.33% 9, 12-Octadecadienoic acid (Z,Z), methyl ester as major methyl ester. The physicochemical properties of the biodiesel produced are found to be within the ASTM standard hence the biodiesel maybe use as an alternative or additive to conventional diesel.

Fossil fuels are one of the major sources of energy in world today. It can be accounted to easy usability, availability and cost effectiveness [1]. But the limited reserves of fossil fuels are a great concern owing to fast depletion of the reserve due to worldwide increase in demand [1].

Biodiesel has become beguiling nowadays for it is environmental benefits and it seems an opposite alternative fuel for future [2], it’s made from renewable biological sources such as vegetable oils and animal fats [2]. It is biodegradable and nontoxic, low emission profiles and also environmentally beneficial [3].

Vegetable oils are among the different sources of energy fuels being considered as alternatives to fossil fuels [4]. Palm-oil, coconut oil among other oil is required in refined forms to obtained quality biodiesel, in Addition to their food needs, this makes the production of biodiesel from their sources uneconomical [5]. Non-edible oils obtained from plant species such as Jatropha curcas L . and Castor seeds may provide better alternatives with great potential for biodiesel production because it does not conflict with the food crises: since it is not main food source [6]

Each Jatropha seed produces 35% to 37% of its mass in oil and it is drought resistant [1]. It is being considered a break through because of availability of various types of oil seeds in huge quantities. Vegetable oil are renewable in nature and may generate opportunities for rural employment when use on large scare [1].

Sample preparation and extraction of oil

The seed was sundried to remove moisture content and grinded to powdered form. The Jatropha oil extraction was carried out by soxhlet extraction method as reported by Farag et al. [7].

The catalyst was prepared heterogeneously by a method called Ameliorated method below.

The product will be:

Transesterification of the oil into biodiesel

The pretreated Jatropha oil (20 g) was placed in two necked round bottom flask, placed on hot plate magnetic stirrer heated to 50°C and stirring at 600 rv/m. the methanol was mixed with 0.6 g (3 w/w%) catalyst load of sulphated zirconia in a beaker and heated to 40°C in water bath, then transferred into two necked round bottom flask containing oil. The reaction mixture under the same condition was allowed for 2.15 hrs. The mixture was then transferred into a separating funnel and allowed to separate overnight under gravity. Two distinct layers were observed, a dark bottom layer which is the glycerol and the light upper layer which is the biodiesel, in some cases when the layer did not separate distinctly enough, equal amount of distilled water and n-Hexane is added to aid the separation. After which the biodiesel was washed by adding 20% volume of warm distilled water and agitated gently for 5 minutes. The mixture was allowed to settle into a two layer from which the biodiesel was separated from the impurities, glycerol and water. The washing was done in order to remove impurities and any remaining residue methanol [9]. The biodiesel yield was calculated using equation 3.

Characterization of the highest yield 97.91% of the biodiesel produced was carried out using GC-MS model QP-2010 PLUS machine for the characterization, the biodiesel was injected into the gas chromatography at injection temperature which was programmed for 70°C to 280°C for 5 minutes and at 280°C for 5 minutes. The analysis was done based on software matching with standard mass spectra.

Physicochemical characterization of the oil

The saponification value, kinematic viscosity, specific gravity, iodine value acid value and flash point were determined through the methods as reported by Indhumathi et al. [10]. The cloud and pour point were analyzed according to method by Fuduka et al. [11]. The high heating value was calculated using formula as reported by while, cetene number according to Demirbas et al. [12,13].

The results obtained from the physicochemical properties of the Jatropha seed oil, biodiesel produced, and ASTM standards are shown in the Table 1.

Characterizations of the catalyst prepared 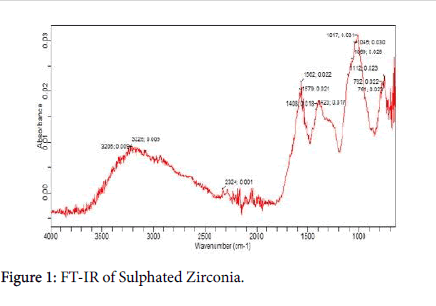 DSC analysis: The DSC (diffraction scanning colometry), analysis of S-ZrO2 as indicated in Figure 2, show glass transition temperature (the temperature at which the catalyst undergone change in heat capacity without change of state) as 74.82°C, the crystallization temperature (the temperature at which catalyst amorphous solid change to crystalline solid) is 158.31°C with exothermic heat as -46.78 × 10-3 mW/°C. As the catalyst heated from 59.996 to 299.93°C, the heat capacity change from -0.0232 mW/°C to 0.0073 mW/°C, this is due to crystallization of catalyst from amorphous to trigonal of ZrO2. The specific heat capacity of the S-ZrO2 normalized at 1.44 J/g. 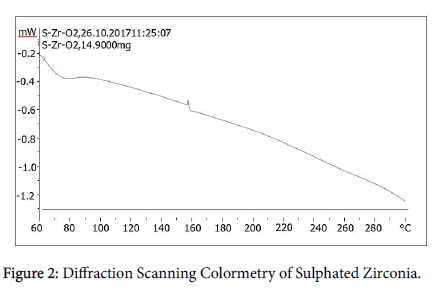 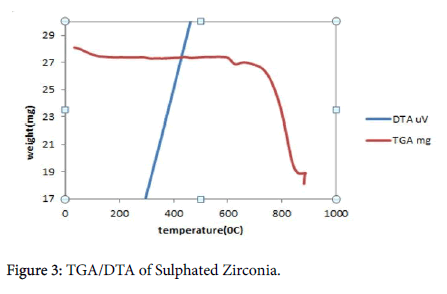 Figure 4 is the X-ray diffractogram of the S-ZrO2 and the principal minerals present. The diffractogram of the S-ZrO2 show strong absorption of various point of 2 Ø, the important peak at 28.0°C, 31.8°C, 34.0°C and 50.4°C show the characteristic absorption of mineral Baddeleyite (ZrO2). The X-ray diffraction neutron’s catering and EXAFS spectroscopy of monoclinic Zirconia analysis show crystal cell per volume of ZrO2 is 140.64 Å3. 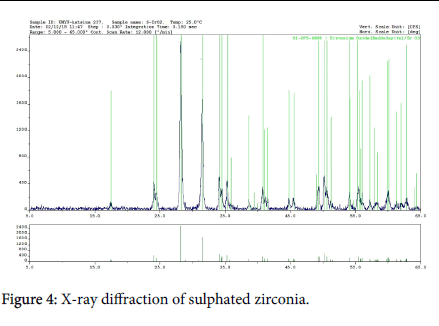 The yield of biodiesel produced at optimum transesterification variable were (60°C, 3 hours, 1:8 w/w%) was found to be 97.91%. This is slightly higher than the value (89.90%) for Jatropha biodiesel obtained by Teo et al. [16] using calcium oxide as catalyst, similar result (96%) was obtained by Endalew et al. [17]. The varying optimum biodiesel yield results may be due to the different methods of the catalyst preparations, catalyst loads, temperatures and oil to methanol ratios.

Acid value: The acid value of the biodiesel determines the level of free fatty acids present in the biodiesel. The acid value of biodiesel produced was 2.02 mgKOH/g, as presented in Table 1 is higher than 0.5 maximum ASTM standards. This can be corrected by neutralizing the oil before use to suits engines in order to avoid corrosion and wear in fuel systems and storage tanks.

Flash point: The flash point of the biodiesel was 140°C as shown in Table 1, which falls within the range of 170 ASTM standards; similarly, a slightly higher result (162°C) was obtained by Singh et al. [18]. Flash point is not related to engine performance but is inversely related to fuel volatility Ramirez-Verdazeo et al. [19]. The flash point of biodiesel obtained indicates the lower volatility of the oil which in turn indicates its safety in handling.

Pour point: The pour point of biodiesel produced was 5.5°C as shown in Table 1, a lower result (-6°C) obtained by Singh et al. [18]. The value obtained is within the range (-15 to 10°C) of the ASTM standards. Considering the average temperature of our locality 22 to 40°C, the biodiesel could be handled and stored safely without solidifying, but when the fuels are to be used in cold regions, they would have to be preheated or blended with some additives that would further reduce the pour point of the biodiesel [20].

Cloud point: Cloud point of the biodiesel produced is 7.9°C as presented in Table 1, a lower result (2 ± 0.21°C) obtained by Aldo et al. [21] which are both within the range (-2 to 12) ASTM standards of biodiesel, the difference may be a result of different in weather and climatic conditions.

Kinematic viscosity: The kinematic viscosity of the biodiesel is 4.70 mm2/s, as presented in Table 1, A similar result (5.25 mm2/s) was obtained by Aldo et al. [21], and a lower result (4.51 cSt) was obtained by Previous work. The result obtained is within the range (1.6 to 6.0) of ASTM standards, which indicate the presence of short chain unsaturated methyl fatty acid esters and is likely to produce less deposits when burnt in combustion engines.

Cetane number: The result contained in Table 1 for biodiesel is 62.27, which agree with range (48-65) ASTM standard specification for biodiesel, lower result (49.50) obtained by Afaf and Salwa [4]. However, the high cetane number of the biodiesel obtained indicates its good ignition quality.

This research work demonstrated the production and characterization of biodiesel from Jatropha curcas L. seed using sulphated zirconia catalyst revealed 97.91% biodiesel yield and 31.59% methyl ester yield as analysed by GC-MS. The characterization of the catalyst shows that, the DSC analysis show glass transition and crystallization temperature of sulphated zirconia as 74.82°C and 158.31°C and specific heat capacity 1.44 J/g. The TGA/DTA show the catalyst decomposed at temperature ranged 600- 900°C. While the XRF results show 74.03% ZrO2. The physicochemical properties of biodiesel produced are within ASTM standards, this indicate that, oil might be used as alternative to conventional diesel or as an additive.

Copyright: © 2018 Dangoggo SM, et al. This is an open-access article distributed under the terms of the Creative Commons Attribution License, which permits unrestricted use, distribution, and reproduction in any medium, provided the original author and source are credited.