Cytogenetics have long been the most informative single prognostic factor for outcome in acute myeloid leukemia and the most useful guide available for classification and defining post-remission treatment [3].

Clonal cytogenetic abnormalities were found in approximately 55% of de novo AMLs; the rest with no cytogenetic changes, lack possible clues to their molecular pathogenesis [4]. Normal cytogenetics (CN) constitutes the largest group in AML. Interestingly, several studies found that nonrandom chromosomal abnormalities were frequent, of which trisomy 8 (+8) is the most common numerical aberration (12%) whether a sole abnormality (≈4%) or in association with complex karyotypes (≈8%) [4].

Tetrasomy, pentasomy, and hexasomy of chromosome 8 are relatively rare compared to trisomy 8, which was found to be associated with an unfavorable disease prognosis [5]. This study aimed to detect the prevalence of aneuploidy in chromosome 8 among Egyptian patients who presented with acute myeloid leukemia and to assess the impact of chromosome 8 aneuploidy on the clinical and haematological presentation of the studied cases.

This study included forty newly diagnosed acute myeloid leukemia patients attending National Cancer Institute (NCI); Cairo university outpatient clinic during the years 2011 and 2012. They were diagnosed as AML by bone marrow aspirate examination, cytochemistry and immunophenotyping. The study was approved by the Ethical Committee of Clinical Pathology Department, Cairo University. Informed consent was obtained from all patients for being included in the study.

Immunophenotyping using the specific monoclonal antibodies panels for all cases using flow cytometer by Beckman Coulter XLMCL was performed to confirm the diagnosis of AML with a wide panel of myeloid markers (MPO, CD13, CD33, CD117, CD14 and CD15), lymphoid markers (CD10, CD19, CD22, CD79a, CD20, Cyto IgM, Kappa and Lambda for B lymphoid series, and CD3, CD2, CD4, CD5, CD7, and CD8 for T lymphoid series) and the stem cell marker CD34 as well and HLA DR on routine basis. Karyotyping was done as a routine investigation for leukemia patients, and FISH to detect aneuploidy of chromosome 8.

Detection of copy number of chromosome 8 and t(8;21) was done by FISH. For each specimen, metaphase and interphase nuclei preparations were made from BM cells derived from short-term cultures (24-72 hours). Pellets were suspended in fresh fixative (3:1 methanol:glacial acetic acid) and dropped on clean slides. Slides were cleared in 100% ethanol and air-dried before hybridization. For metaphase spread preparation, colcemid was added at the end of culture and left for 20 minutes. Pre-warmed hypotonic KCL solution was added slowly and left for 30 minutes before fixation. FISH was performed using a whole chromosome painting probe (WCP). The chromosome 8 painting probe (WCP-8) was labelled in red and chromosome 21 painting probe (WCP-21) was labelled in green (Vysis, Downers Grove, IL, USA). 10 μl from each probe was applied to chromosome preparations, cover slipped, and sealed with rubber cement. The slides were placed in the denaturing-hybridization system for the FISH (hybrite), HyBrite™ apparatus (Vysis, Downers Grove, IL, USA). Chromosomal and probe DNA were denatured simultaneously for 2 minute at 73°C and hybridization was allowed to take place at 37°C for 16 hours. Post-hybridization washes were as follows: one rinse in 0.4×SSC/0.3% NP-40 at 73°C for 2 minutes and one rinse in 2×SSC/0.1 NP-40 at room temperature for 2 minutes. Nuclei were counter stained with DAPI (Sigma, St Louis, MO, USA). The specimens were viewed using an Olympus BX-40 microscope (Olympus, Tokyo, Japan) that was equipped for fluorescence optics. Photographs were taken with an Olympus U-CAMD3 camera. The images were analysed using CytoVision Genus software (Applied Imaging, San Jose, CA, USA) applied image analyser (Figure 1). 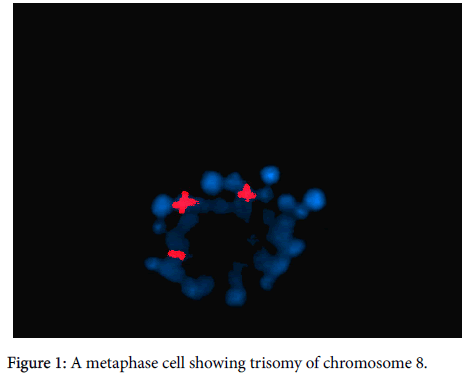 The clinical and laboratory data of the studied patients are shown (Table 1).

Table 1: Clinical and laboratory data of the studied patients.

Characteristics of cases with chromosome 8 aneuploidy

The number of patients having chromosome 8 aneuploidy was not sufficient enough to allow studying its association with the different clinical or laboratory data.

Acute myeloid leukaemia (AML) is a clinically and genetically heterogeneous disorder that ensues from clonal transformation of hematopoietic precursors resulting from the acquisition of chromosomal rearrangements and numerous gene mutations [6].

At National Cancer Institute (NCI); Cairo University, Egypt; there were 18,496 newly diagnosed cases presenting between January 2002 and December 2003. Of these, there were 1300 cases of acute leukaemia accounting for 7% of all new cases. AML accounted for approximately 41.5% of 840 newly diagnosed acute leukemias and for 4.6% of all cancers [7].

Cytogenetic abnormalities represent important diagnostic and prognostic tools for hematologic malignancies. Karyotyping and fluorescence in situ hybridization (FISH) are the conventional methods by which these abnormalities can be identified [8].

Tetrasomy, pentasomy, and hexasomy of chromosome 8 are relatively rare compared to trisomy 8, which is one of the most common recurring aberrations in myeloid hematologic malignancies [9]. Trisomy 8 is considered as one of the most common numerical aberrations in acute myeloid leukemia (AML), with a 10% to 15% frequency. Previous studies reported that AML patients with trisomy 8 have unfavourable prognosis [10].

Albeit some studies have reported that trisomy 8 presents an independent prognostic risk in AML, a German AML cooperative group study reported that prognosis is also affected by associated clonal cytogenetic changes [11]. In the present study, karyotyping and FISH analysis were used to detect chromosome 8 aneuploidy in 40 de novo AML patients. This study also aimed to assess the impact of chromosome 8 aneuploidy on the clinical and hematological presentation of the studied cases.

In our study, FISH analysis was successfully carried out on all the 40 studied cases which were due to presence of sufficient number of metaphases and good quality of chromosomes. Trisomy of chromosome 8 was detected as a sole anomaly in 2 out of 40 de novo AML cases, representing a frequency of 5% which is comparable to the results of Paulsson and Johansson, (2007) who estimated that the incidence of trisomy 8 as the single anomaly in AML vary significantly among the continents; being 5.1% in Africa, 7.5% in Europe, 4.3% in Asia, 5.6% in Latin America [12].

Similarly, Paulsson et al. reported that 5.6% of the de novo AML patients had trisomy 8 as a sole abnormality [2]. This incidence agrees also well with those reported previously by Solé et al. [13] and Westwood et al. [14]. Moreover, in a study performed by Manola et al. it was found that trisomy 8 existed at a high frequency (10.5%), whether as a sole cytogenetic abnormality or with other chromosomal anomalies, in all FAB subgroups. This may be due to large sample size of their study as well as geographic difference of the studied population [1].

An attempted explanation of the biologic role of the additional 8 chromosome was based on the perception of increased copies of the CMYC oncogene that is localized to 8q. Jennings and Mills, suggested that increments in C-MYC were important to the course of the disease and that trisomy of chromosome 8 was the mean for amplification of this gene [15]. The role of trisomy 8 in tumorigenesis may be explained by increasing impact of certain genes due to uniparental disomy (UPD) caused by the additional 8 chromosome. The chromosome 8 UPD has been involved in rectal carcinoma and adenoma, transformed B-cell lymphoma, pancreatic cancer, and AML [16]. In agreement with Wolman et al. who admitted that trisomy of chromosome 8 is slightly predominant in females, both our cases of +8 were females [17] this comes in contrast to with Paulsson and Johansson, who found no gender related difference [12].

In accordance with previous studies, monosomy 8 was found in 1 case (2.5%); this frequency highlights the rarity of this chromosomal anomaly in AML [5]. In the present study associations between chromosome 8 aneuploidy and other laboratory variables including HB, platelets, PB and BM blast percentage could not be assessed owing to the small number of patients showing this aberration.

In conclusion, this study provided the opportunity to investigate the incidence of chromosomale 8 aneuploidy in Egyptian AML patients. This is a preliminary study which should be supplemented by further molecular studies using larger sample size to verify the prevalence of chromosome 8 aneuploidy in AML patients among Egyptian population. Future molecular studies of trisomy 8 should include follow up of the studied cases throughout the course of the disease and its response to therapy as an attempt to clarify its prognostic significance. A major limitation for our study was the small sample size owing to limited financial resources.

This study was funded by the authors.

The Authors declare that they have no conflict of interest.

Copyright: © 2016 Eyada TM, et al. This is an open-access article distributed under the terms of the Creative Commons Attribution License, which permits unrestricted use, distribution, and reproduction in any medium, provided the original author and source are credited.