The waste snail shell was screened to determine its efficiency as heterogeneous catalyst for biodiesel production via trans-esterification reaction. Prior to its use, the solid oxide material (shell) was calcined at 800°C for 4 h to convert CaCO3 to CaO. Physicochemical analysis of waste cooking oil reveals the acid value (3.47 mg KOH/gm), density (0.9 g/cm3), moisture content (0.1%) and kinematic viscosity (42.2) respectively. The prepared solid oxide catalyst was characterized using X-ray Fluorescence (XRF) and Fourier Transform Infrared Spectroscopy (FT-IR) methods. The catalytic activity of the catalyst was evaluated by the transesterification reaction under the following reaction conditions: temperature (60°C), time (3 h) and methanol to oil ratio (9:1) respectively. GC-MS analysis was used to characterize the fatty acid methyl ester composition. The research signified successful application of waste snail shell as heterogeneous catalyst for prospective economic preparation of heterogeneous catalyst. It also developed an unconditional avenue for using the waste snail shell as the catalyst.

The 21st century is faced with many problems such as energy sustainability, environmental problems and rising fuel prices among others to mention but a few. Knowledge that is known about the usual conventional fuels is nothing to write good about as they are known for polluting air by emissions of sulfur dioxides, carbon-dioxides, particulate matter and other gases which are detrimental to the environment as it contributes to global warming problems [1] Even with this, we are still charged with the responsibility of harnessing energy from other green sources because “Energy sources are the main driver of economic growth and social development of a country [2] and if we want to progress as a country, it is of paramount important that we should search for a greener alternative source of energy. Naveen [3], also noted that there is an exponential increase in the consumption of fossil fuel both in developed and developing nations; and it is estimated that these fuels shall be exhausted by the turn of 22nd century. This is an enough convincing reason to why research should be focused on an alternative source of energy.

The demand for world energy continues to rise due to two main reasons; the continuing increase in the world population and the growing demand by developing countries for their growth [2]. One of the alternative fuels, developed over a century ago is biodiesel. Biodiesel has been selected as an interesting alternative fuel as it is renewable, biodegradable, non-toxic and environment-friendly. Biodiesel possesses a high flash point, better lubrication and high cetane number and has a quite resemblance in regard to physical and chemical characteristics with that of conventional diesel fuel [4]. Vegetable oil and animal fat are the best sources for biodiesel [5]. These sources can be subjected to trans-esterification reaction to undergo change in viscosity and volatility. The transesterification is carried out with a simple alcohol in the presence of a catalyst, which can be either homogeneous or heterogeneous [6]. Transesterification can be catalyzed by an acid, base, or enzymes [7].

Heterogeneous catalysts have the advantage that separation and regeneration of the catalyst are easy and cheap [8]. Heterogeneous basic catalysts include alkaline earth metal oxides such as calcium oxide (CaO), magnesium oxide (MgO) and hydrotalcites [9]. Unfortunately, the preparation of heterogeneous catalyst is quite expensive and complex [10]. Therefore, low cost solid wastes are looked into to serve as solid heterogeneous catalysts. Several researches have been done on waste food materials like chicken egg shell, oyster shell, mud crab shell, golden apple snail, meretrix venus and mollusk shell as cheap and abundant resources of CaO for application as low cost heterogeneous catalyst for biodiesel synthesis [11]. Egg shell has proved to be an active solid catalyst, providing yields of 96% [11] and 97%-99% [10]. Further, crab shell provided 97% of conversion [6] and snail shell provided a biodiesel yield of 87.28% [7]. In this work, we have carried out transesterification using the snail shell as inexpensive and environmentally-friendly catalyst. The aim was to optimize the process for biodiesel production from waste cooking oil using CaO catalyst.

The used oil sample was taken from the fryer which was used for frying potatoes and other vegetables based food in Sokoto State. The used vegetable oil was mainly contaminated with water and solid particles. Some analyses (Table 2) were conducted on the waste oil to determine the quality of the oil and a pre-treatment process was conducted to remove the solid impurity through filtration. The snail shell was obtained from Ijabgo town of Oyun local government, Kwara State. It was well rinsed with running water to remove dust and impurities and then dried in the sun.

CaO catalyst was prepared by calcination method. The dried snail shell (100-200 mesh) was calcined at 800°C in air atmosphere with a heating rate of 10°C/min for 4 h. The product was obtained as a white powder. The calcined sample was kept in close vessel to avoid the reaction with carbon dioxide (CO2) and humidity in the atmosphere before used. Figure 1 illustrates the preparation process of snail shell waste-derived catalyst.

The physicochemical properties of the catalyst were assessed using the following procedures:

1. X-ray fluorescence (XRF): Oxford instrument gave the elemental composition of the calcined catalyst. The atoms of the sample absorb energy from x-rays and become temporarily excited and then emit secondary X-rays. By measuring the intensity and characteristic energy of the emitted X-rays, qualitative and quantitative analysis regarding the thickness and composition can be obtained.

2. Fourier Transform Infrared Spectroscopy (FT-IR): The sample was mixed with alkali halide potassium bromide (KBr) and compressed into a thin transparent pellet using a hydraulic press, before being placed in the standard sample compartment of the spectrometer.

The trans-esterification reaction was performed in a 2000 cm3 4-necked round bottom flask. One of the side necks was fitted with a water-cooled condenser, the middle neck was used to insert magnetic stirrer, the desired amount of catalysts (CaO catalyst as much as 9% of the mass of the oil), methanol and waste frying oil was introduced into the round bottomed flask and the third neck was fitted with a temperature indicating thermometer and the reactions were carried out at 60°C for 3 h. After the reaction was completed, the catalyst was screened by using a filter paper (0.7 μm) and the transesterification products were allowed to settle overnight for the clear separation of biodiesel and glycerol as seen in plate 1 (Figure 2).

The yield was calculated as follows:

Physicochemical analysis of the WVO

The composition of the waste vegetable oil was analyzed, with the results obtained shown in Table 2. The amount of FFA in the oil was found to be 1.73%. Studies have shown that high FFA reduces catalyst effectiveness and decreases the production yield; therefore, the recommended amount of FFA in WCO should not exceed 1 wt% [12]. In contrast, Ngoya et al. [13] stated that heterogeneous catalysts have proven to catalyze oil with high FFA content (6-15%) without any pre-treatment. The physical properties, like the specific gravity, density, free fatty acid content, moisture content, odor, color are presented in Table 2. The remaining composition of the catalyst composed of different metal oxides (MgO, SiO2, SO3, P2O5, Na2O, Al2O3, K2O, Fe2O3, SrO, ZnO, Mn2O3, Cr2O3, TiO2) in trace amounts. These oxides have been reported to be active materials for transesterification (7). The basic oxides (MgO, K2O, FeO3) will enhance the catalyst’s basic strength (6), however MgO is not present in the snail shell as shown in Table 3.

FT-IR result: The FT-IR spectra of the snail shell CaO is presented below in Figure 3.2. Traces of carbonate can be found between 1250 cm-1-1600 cm-1, which might be adsorbed during sample preparation and afterwards trapped inside the oxide during the calcination process. The strong band at 3640 cm-1 corresponds to the O-H bonds and this is similar to a report made by Park et al. [14]. The absence of a sharp absorption in the region around 724 cm-1 to 924 cm-1 indicates that CaCO3 as the basic components of the snail shell is no longer present as it has already been converted to CaO [15]. 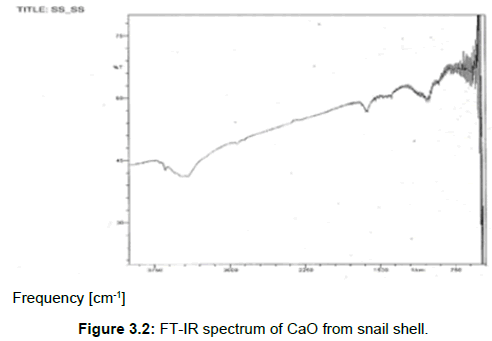 The analysis of the GC-MS shows there are about sixteen main characteristic peaks of Fatty Acids Methyl Esters (FAMEs) appearing by the retention time and the fragmentation pattern data of the biodiesel. See Figure 3.3 below. 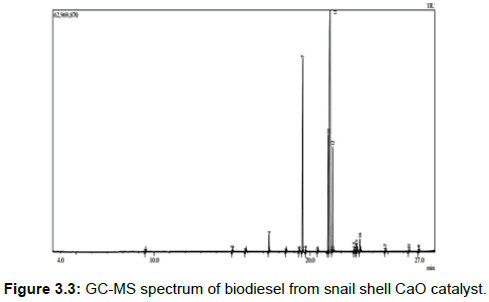 Name of the FAMEs

The snail shell-CaO produced a volume biodiesel conversion of 84.14%.

In the research presented herein, snail shell waste was used as catalyst for the production of the biodiesel process. The shell contained CaCO3 which was converted to CaO after calcination at temperatures 800°C for 4 h and CaO was acknowledged as an effective heterogeneous catalyst for the transesterification of waste cooking oil. The optimal reaction conditions used in this research, which yielded a conversion of 84.14% biodiesel, were; reaction time 3 h, reaction temperature 60°C, methanol to oil molar ratio 9:1 and catalyst concentration 9% wt of oil. The experimental result showed that CaO catalyst derived from snail shell had an excellent activity and as a heterogeneous catalyst from waste shell, it can reduce the cost of biodiesel production. Similarly, it proved to be a potential feedstock for industrial application.

Copyright: © 2017 Sani J, et al. This is an open-access article distributed under the terms of the Creative Commons Attribution License, which permits unrestricted use, distribution, and reproduction in any medium, provided the original author and source are credited. 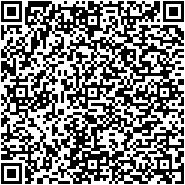 18th Global Summit and Expo on Biomass and Bioenergy