One of the main problems we are faced with in the adaptation to RPG contact lenses in Keratoconus cases, among others, is the focusing of the lens in the affected cornea; such fact may lead us to try all solutions within our reach in order to provide to our patient a better quality of life. This is a success case fitting a reverse geometry lens.

Keratoconus is an ectasia dystrophy characterised by the thinning and protrusion of the central and/or paracentral cornea, which progressively assumes a conical shape [1].

The apparent participation of several factors in the development of Keratoconus contributes towards the controversies, still existing today, regarding the aetiology, heredity, pathogenesis, pathology and biochemistry. Many have been the theories put forward regarding this topic among which the following are highlighted:Association to systemic illnesses, such as connective tissue illnesses, atopy and Down syndrome.

Degeneration of the basal layer of the corneal epithelium with the production of enzymes destroys the basal membrane. Genetic disorder, which causes the destruction of the corneal stroma collagen. Chronic trauma, such as eye rubbing, common in allergic patients and with the Down syndrome [2].

Endocrine disorders suggested by the manifestation during puberty; female gender predominance, with a tendency to develop during pregnancy.

The wearing of contact lenses: Evidences that contact lenses facilitate the emergence of Keratoconus due to chronic trauma is mentioned by some authors, while others highlight the properties of contact lenses in preventing its development. Both hypotheses, up until now, have not been convincingly proven.

In most cases it is bilateral and although predominantly asymmetrical sometimes, the collateral eye presents a high level of astigmatism. In histopathology, Keratoconus presents a fragmentation of the Bowman membrane, a thinning of the stroma and epithelium, Descemet membrane folds or ruptures, with variable fibrosis proliferation in the previously mentioned ruptures. The deposits in Fleischer ’ s ring take place at the cone basis, at the level of the epithelium basal cells [3].

The estimates of Keratoconus prevalence in the population ranges from 4 to 108 per each 100,000 persons.

V.A.B.O., male patient, born in 08.10.1960, civil servant, clerical worker, came to our practice mentioning the fact that he could not tolerate the LE contact lens. This patient was diagnosed to have Keratoconus 8 years ago, more or less, although the latter says he already had vision problems a long time before. Ever since he started wearing the contact lenses, without significant changes, these are the ones he continues wearing today. He came, however, to our practice, mentioning that he cannot tolerate the lens on his LE for a period longer than 2 hours per day, thus, in case he wears it for a longer period of time his eye becomes completely congested. Even when he removes the lens after a few hours his eye is red during longs period of time (Figure 1). 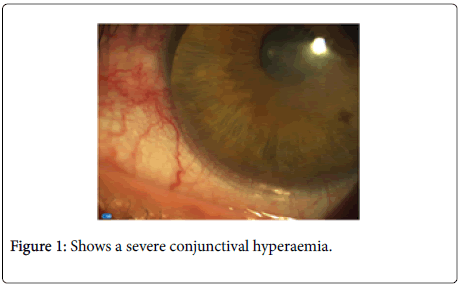 Does not have a clinical background of allergies and is not undergoing any medical treatment at the moment.

Focusing with glasses – which he doesn’t wear due to the fact that the V.A. is very low.

With the examination performed to the LE adaptation with a Slit Lamp (Figure 1) – a severe conjunctival hyperaemia is clearly observable due to the fact that the lens is not correctly positioned, too low, the rim is being supported by the limbar conjunctiva.

The examination of the corneal topography after removing the lens is shown in Figure 2. The figure presents a clear keratogenic cornea with a displacement of the lower vertex. This is the reason why there is a constant inferior displacement of the contact lens [4] (LE). Figure 2: Examination of the corneal topography after removing the lens.

The patient was asked not to wear the lens during a week, so that we could carry out not only an examination of the curvature as well as to see the condition of the conjunctiva.

One week after – The slit lamp examination clearly shows a decrease of the conjunctival hyperaemia, (Figure 3) caused by the wearing of the contact lens. 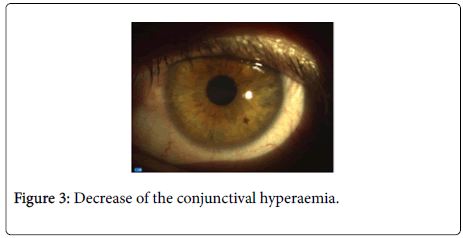 Figure 3: Decrease of the conjunctival hyperaemia.

The corneal topography has shown and proven that we were before a Keratoconus with a strong inferior misalignment and with an eccentricity close to 0.8 (Figure 4). 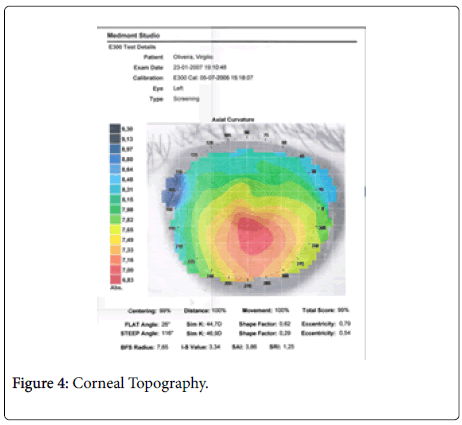 Considering the above mentioned we decided to try the adaptation to a lens with an eccentricity closer to the cornea [5].

Due to the strong eyelid tension and the overlapping over the cornea, the lens even with a large size and eccentricity ends up being pushed to focus with the cone, ending up with a focusing which is identical to the one used by the patient (Figure 5). 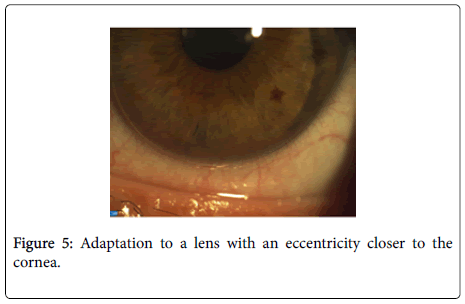 Figure 5: Adaptation to a lens with an eccentricity closer to the cornea.

We decided to decrease the diameter of the contact lens and the respective curvature keeping the eccentricity.

We saw that the adaptation conditions did not undergo many changes, the lens continued to be very low, in this case the vision, on the contrary to the 1st trial, (9/10) would also decrease to 7/10.

This time we chose a lens from a different brand with a slightly bigger eccentricity and a smaller diameter.

As it can be seen in Figure 6, we did not achieve what we intended, the lens focusing and therefore the possibility of not causing an irritation of the conjunctiva continued to be identical. 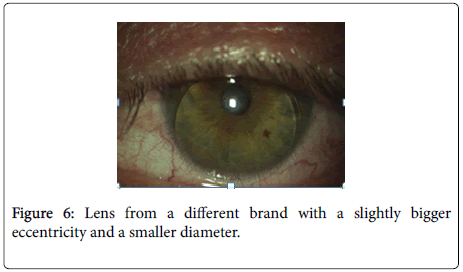 Figure 6: Lens from a different brand with a slightly bigger eccentricity and a smaller diameter.

The fluorescein examination presents a bridge adaptation with an apical touch, being an adaptation, which is also identical to the one used by the patient and, therefore it does not generate any improvement to the patient's clinical condition (Figure 7). 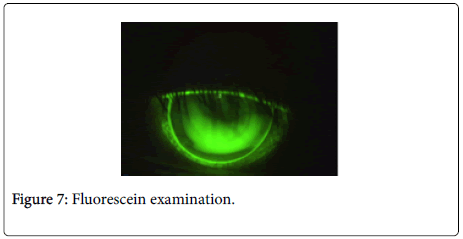 Being this the case, we decided to try a different geometry since the standard ones were not providing the desired outcomes, we decided to choose an opposite geometry lens, but reviewing the adaptation criteria and the adaptation to which our patient has been subject to, which might be causing, on the short term, the rejection of the contact lens on this eye.

The underlying criterion to this new adaptation would have to be, trying to adapt an opposite geometry [6] lens where the lens, conversely to its function, flattens the corneal apex, not touching the latter creating a bridge, supporting itself on the paracentral area and thus not generating discomfort to the patient and, at the same time, remaining focused.

When this lens was tried on our patient’s eye, we saw that the lens presents a very good focusing and that the criteria we had defined, in theory, had an almost perfect performance immediately during the 1st trial. It is possible to see in Figure 8, that the lens, unlike the previous ones, does not affect the limbar area. Another assumption, being able to prevent that the lenstouches the corneal apex, was almost achieved, immediately with the first lens (Figure 9). 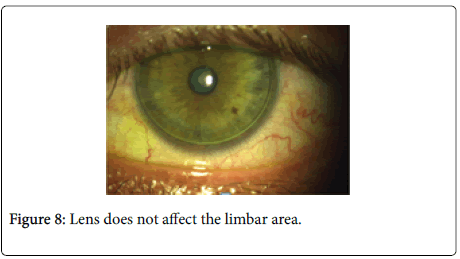 Figure 8: Lens does not affect the limbar area. 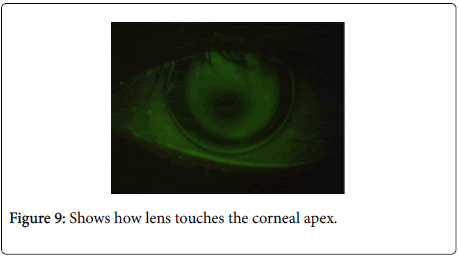 We needed then to make some changes to this first lens, namely, to decrease the base curvature and to slightly decrease the peripheral band.

The compensation or correction of Keratoconus patients strongly depends upon the evolution of the disease. During the initial phase we can still consider glasses or hydrophile contact lens, in a more advanced phase it is, however, almost, if not impossible, avoiding RPG lenses. However, even in these cases we can be faced with problems which are difficult to solve. When all correction hypotheses fail with the available means, then surgery can be considered.

According to Wilson (1991), 72% out of 85 eyes with Keratoconus examined are inferior peripheral or inferior temporal, the remaining are central with a superimposed pattern of asymmetrical astigmatism.

The main disadvantage of the apical touch is the possibility of causing injuries to the epithelium and the induction of corneal scarring.

The advantages include the possibility of a higher VA and a longer number of hours wearing the lens, unlike the apical clearance solution where the advantage lies in minimizing the possibilities of causing injuries to the cornea.

The introduction of opposite geometry lenses, following the apical clearance criterion, gives us the possibility that standard lenses do not provide, taking into account that with these lenses we can define 4 different parameters in the same lens: diameter, central curvature, sagittal depth and peripheral topography.

According to Kusy and Barr the opposite geometry lenses adapted according to the apical clearance criterion provide a better VA and considerably decrease aberrations [8].

Before these ones we have other possibilities such as:

- Aspherical: all types of Keratoconus

Also, in case the above mentioned do not work and in very special cases:

- Piggy-Back: adaptation of an RPG lens on hydrophile lens

In this case it was important to find a solution notwithstanding the fact that it might be somewhat controversial it has enabled our patient to continue wearing a contact lens in his LE, during, at least, 8-10 hours per day therefore increasing this life quality.

Because this lens has an intermediate bearing zone, it causes the lens periphery not to engage in the limbal-scleral zone and thus does not press the vessels of this region (Figure 10). 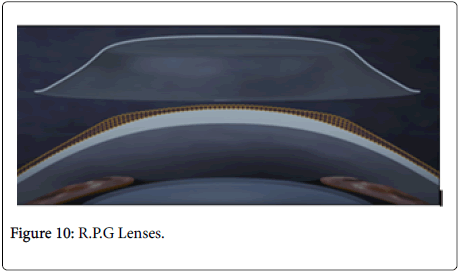 Undoubtedly, RPG lenses are the best choice for most Keratoconus cases. However, this kind of adaptation involves a very detailed work. It should be stressed that this was not only achieved with a focusing of the lens, as well as with the apical clearance, avoiding a strong feeling of discomfort, as well as the fact that our patient could fully take advantage of a VA=9/10.

Copyright: © 2020 Nascimento H, et al. This is an open-access article distributed under the terms of the Creative Commons Attribution License, which permits unrestricted use, distribution, and reproduction in any medium, provided the original author and source are credited.