Salivary duct carcinoma (SDC) is a malignant epithelial tumor extremely rare in minor salivary glands. This manuscript describes two cases of SDC of the minor salivary glands with different clinical behaviors. The first patient was an 80-year-old man who had SDC (T1N0M0) in the upper buccal fornix and the second patient was a 64-yearold man with a tumor (T2N2cM0) in the soft palate. Patients were treated with radical surgical resection and none patient underwent postoperative radiotherapy or chemotherapy. Histopathologically, the lesions showed proliferation of ductal cells with varying degrees of nuclear pleomorphism arranged in solid and cribriform structures and prominent comedonecrosis. The patient with SDC in the soft palate developed metastases and died shortly after diagnosis while the patient with SDC in upper alveolar ridge is alive without disease for over 6 years of follow-up. Although SDC is aggressive, anatomical site and precocious diagnosis are relevant factors for better prognosis.

Salivary duct carcinoma was first described in 1968 by Kleinsasser et al., [1] and it was recognized in the World Health Organization classification of salivary gland tumors in 1991 [2]. SDC is an uncommon and high-grade malignant tumor occurring predominantly in major salivary glands [3,4] with predilection for elderly men [5,6]. SDC is infrequent in minor salivary glands having resemblance to the ductal carcinoma of breast. SDC arises de novo or develops as the malignant component of carcinoma ex pleomorphic adenoma. SDC has invasive growth resulting in early regional and distant metastasis including lungs, liver and bones [4,7], and nearly 50% of the patients die of the disease within 4 to 5 years [8,9].

We report two cases of SDC arising of the minor salivary glands with different clinical behaviors.

An 80-year-old man was referred to the Oral Diagnostic Clinic for evaluation of a lesion in left upper buccal fornix with two months of evolution. On clinical examination, it was observed a painless ulcerated nodule with 2.0 x 1.0 cm that impeded the proper use of upper prosthesis (Figure1A). 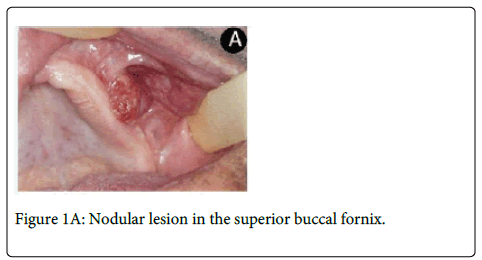 Figure 1a: Nodular lesion in the superior buccal fornix. 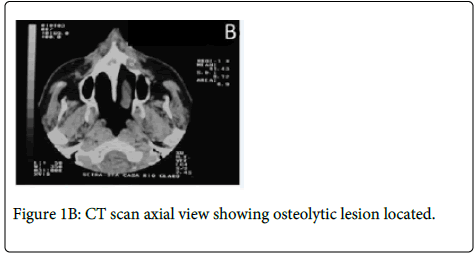 Absence of hemorrhage and perineural and vascular invasion were observed. No invasion to surrounding tissue was found. Immunohistochemical study confirmed the luminal epithelial nature of the tumor cells with strong staining for CK7, CK8, CK18, CK19 and PSA (Figure 2). It was observed negativity for p63. The Ki-67 index in the tumoral cells was 5%.

The patient was referred to the head and neck surgeon who requested chest x-ray, gastrointestinal endoscopy, prostate ultrasound, bone scintigraphy and laboratory tests (PSA), which ruled out the possibility of metastasis or other primary tumors. The patient was staged as T1N0M0 and a maxillectomy was performed. The specimen measured 1.8x1.0 cm and the histopathologic analysis of the surgical specimen confirmed the diagnosis of SDC and showed free surgical margins. The tumor was well delimited. At six years of follow-up, the patient is alive without evidence of recurrence or metastasis.

A 64-year-old man was referred complaining of a painless nodule in the palate for five months. Extraoral evaluation revealed cervical lymph nodes bilaterally suggestive of metastasis. On intraoral examination it was observed a nodular lesion involving the soft palate, measuring approximately 3.0x2.5 cm displacing the uvula to the right side (Figure 3A and 3B). 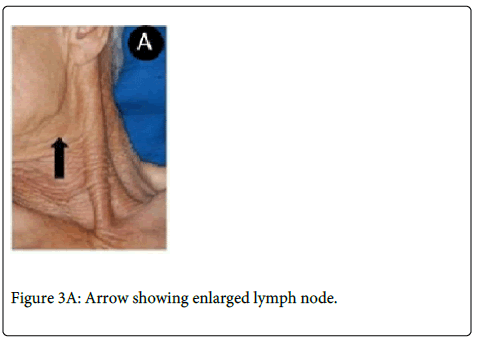 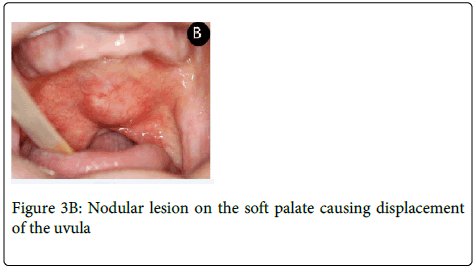 Figure 3b: Nodular lesion on the soft palate causing displacement of the uvula

The patient underwent incisional biopsy and the microscopical findings showed a proliferation of carcinomatous islands and scattered individual cells immersed in a highly hyalinized connective tissue. The neoplastic cells formed solid islands in a ductal pattern. The luminal cells were eosinophilic with hyperchromatic nuclei and conspicuous central nucleoli. The diagnosis was of invasive adenocarcinoma.

The patient was referred to head and neck surgeon, who staged the patient as T2N2cM0 (TNM system) through image examination (CT). The surgeon performed a radical tumor resection with bilateral neck dissection. The histopathological analysis of surgical specimen revealed that the tumor consisted of solid and cribriform cell nests with ductal structures, comedonecrosis, frequent mitoses and intense neural and vascular invasion allowing the final diagnosis of SDC (Figure 3C). The immunohistochemical findings were the same case 1: positivity for CK7, CK8, CK18, CK19 and PSA, negativity for p63 and Ki-67 index in the tumoral cells was 10%.

However, the patient died after one month.

To the best of our knowledge, only 37 cases of SDC originating in the intraoral minor salivary glands have been reported in the English-language literature. The most frequent site is the hard palate (14 cases). We related the first case of SDC in the buccal fornix and the second case of SDC in the soft palate. SDC most frequently affects older male patients in the fifth or sixth decade of life [30]. The mean age of the current patients was 72 years (64 and 80 years) and both patients were male.

Salivary duct carcinoma shows a remarkable resemblance to ductal carcinoma of the breast [15,32,33]. Because of this similarity, after the biopsy in the current cases and given a diagnosis of SDC, the possibility of metastatic breast carcinoma was excluded because the current patients were male. In female patients, studying estrogen, progesterone receptors and immunohistochemical analysis for HER-2 protein may be contributive [34]. In addition, SDC must be differentiated from other malignant salivary gland tumors, including high-grade mucoepidermoid carcinoma, adenoid cystic carcinoma and oncocytic carcinoma [19,32,35].

The invasive nature of salivary duct carcinoma requires radical surgical treatment. Adjuvant radiotherapy or chemotherapy may be indicated and is based particularly on the postoperative pathologic findings such as grade of malignancy, bone or perineural invasion [42]. Insufficient resection with positive margins, perineural invasion, lymphatic embolism, lymphatic invasion, local or regional recurrence and metastasis are factors of poor prognosis [24,43-45]. Local recurrence occurs in 35-66% of patients and distant metastasis in 50-70%, [4,17] and the more common sites are lungs, bone, brain, skin, liver and thyroid gland [46-48]. Approximately 50% of the patients die of the disease within 4 to 5 years [8,9,49]. In the case 2, the patient developed bilateral cervical lymph node metastasis probably because the size and the site of primary tumor affecting the soft palate close to the midline. These facts favored the tumor spread and consequently a poor prognosis.

Carcinomas of minor salivary glands are staged (TNM system) according to their anatomic site of origin, similar to other carcinomas [50]. Spiro et al. (1991) [51] have applied the criteria used for squamous cell carcinoma to mucoepidermoid carcinoma of minor salivary glands. Thus, the patients reported were classified as Stage I or T1N0M0 (case 1) and Stage IVA or T2N2cM0 (case 2).

In the current study, both patients were treated with radical surgical excision. The patient of the case 1 diagnosed with SDC in upper buccal fornix had no local or distant metastases and is free of disease with more than 6 years of follow-up. The patient of the case 2 who had SDC in the soft palate, besides the resection of the primary tumor, also underwent bilateral neck dissection with confirmed lymph node metastasis. No adjuvant therapy was performed because the patient died shortly.

Local invasion, frequent lymphatic and hematogenous metastasis, and poor prognosis characterize the biologic behavior of salivary duct carcinoma. Several studies have described some correlation of prognosis to tumor size (less than 3 cm indicated a better prognosis) [2]. Zohar et al. (1988) showed the highly aggressive biological behavior of the tumor when occurring in the major salivary glands, in contrast to the benign course of the salivary duct carcinoma in the minor salivary gland.

In summary, SDC is an uncommon tumor in minor salivary glands. Although, it is aggressive and has high possibility of developing local and distant metastasis, besides several factors, anatomical location and clinical stage of the tumor are relevant and may interfere with the clinical course of the tumor.

The authors thank Fabiana F. Casarotti (University of Campinas) for the immunohistochemistry assistance.

Copyright: © 2014 Gondak RO, et al. This is an open-access article distributed under the terms of the Creative Commons Attribution License, which permits unrestricted use, distribution, and reproduction in any medium, provided the original author and source are credited.