The left kidney has an elongated renal vein which accelerates the grafting procedure in living donor transplantation. However the inferior vena cava and aorta are manageable via the right-side surgery in the recipient. Age, sex, body mass index, cause of demise, last renal function, co-morbidities and non-beating heart in cadaveric donor may ominously sway renal transplant results [1-4]. A few studies propose that donor kidney side (left or right) may meaningfully effect ensuing kidney transplant fallouts for first 3-12 months, probably associated to operational technical hitches up-and-coming from the inequality in the sizes of the left and right renal veins but 2, 3 and 4 years transplant survival were akin [5-8]. However contemporary studies bared that even in first year, complications, delayed graft function, compromised early and medium-term renal allograft function in right kidney is an as good as left kidney recipient [9,10].

On the other hand in the recipient usually transplant surgeons implant graft in the opposite side. This procedure make pelvis and ureter come medial and ventral to hilum and be more accessible for ureterovesical anastomosis and also facilitate management of possible ureteral complications. Because iliac vessels are abysmal in left side which may complicate operation, we decided to compare outcomes of right kidney which implanted in right side with right kidney which implanted in left side. Our aim was to evaluate the effect of side of kidney donation and also side of transplantation in the recipient on allograft consequence in an Iranian population of living or deceased donor, by observing early and late allograft outcome measures.

The aim of this study was to determine if the outcomes after kidney transplant were influenced by side of kidney donation and/or side of implantation (left versus right).

This study was directed from June 1993 to November 2015 in the Department of Urology at Labbafinejad university hospital (Referral Center, Shahid Beheshti University of Medical Sciences) in Tehran, Iran. Our center is in collaboration with the Collaborative Transplant Study (CTS) which data of transplant patients, donors and their annual follow-ups was used for this study.

Our technique was typical retroperitoneal flank approach for open donor nephrectomy until 1997. Since 1997, the standard method in our department has been left side laparoscopic donor nephrectomy but in some cases right side nephrectomy and same side or inverted kidney transplantation has been performed based on patients’ situations. The allograft transplant was accomplished by anastomosis of the renal artery to the internal iliac artery or to the external or common iliac arteries when the internal was not appropriate. The renal vein in just about all patients was anastomosed to the external iliac vein. Aorta and inferior vena cava were the locations of vascular anastomosis in small pediatric recipients. Suture material was prolene 6-0 and 5-0 for vascular anastomosis. Ureteral anastomosis was done within modified Lich technique using ureteral stent. All transplantations were implemented by the team ran by three transplantation urologists (N.S., A.B. and A.T.).

All data is collected prospectively in our center for transplantations and deposited in computerized software. This data was moved to the Statistical Package for Social Sciences package (SPSS) ver. 19.0 software (Chicago, IL) and used for analysis. Chi square test was engaged to compare the rate of graft failures over dichotomous predictor variables. Mantel-Hantzel statistic was used to adjust the odds ratio over level of one confounding variable. Comparison of Continuous variables over categorical variables was completed by independent samples t-test. Ln transformation was employed to make creatinine distribution closer to normal distribution. Linear regression was implemented to evaluate the influence of donor side and recipient side on 7th day creatinine after introduction of potential confounding variables into the model.

3334 patients were included during the study period. Detail of demographic data of the recipients and donors is presented in Table 1. Comorbidities were observed in 1043 patients and included: diabetes mellitus (N=21), hypertension (N=898), polycystic kidney disease (N=40), neurogenic bladder (N=25), hepatitis B infection (N=41), and others (N=18). Serum creatinine data was available for the 3rd and 7th postoperative days and then at 1, 3, 6 and 12 months after transplantation. As it is evident in Table 1 mean serum creatinine was highest at the 3rd postoperative day and gradually decreased to 1.4 ± 0.7 mg/dl in the 3rd postoperative month and remained rather stable in follow-up till 12 months after transplantation. Figures 1 and 2 depict the changes of serum creatinine with respect to the side of transplantation on the recipient or side of donated kidney (left versus right). 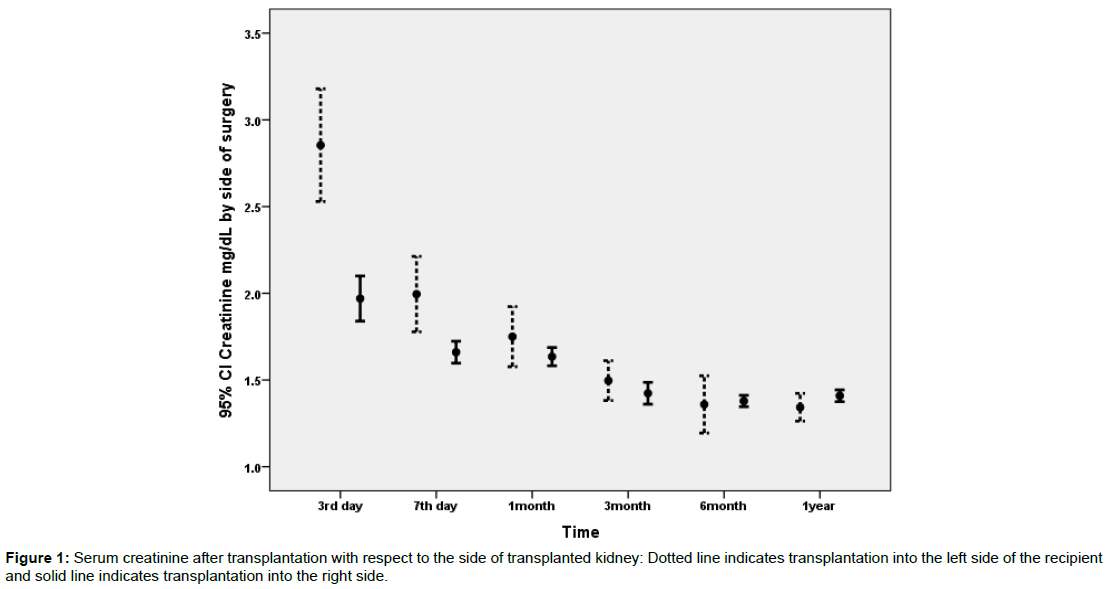 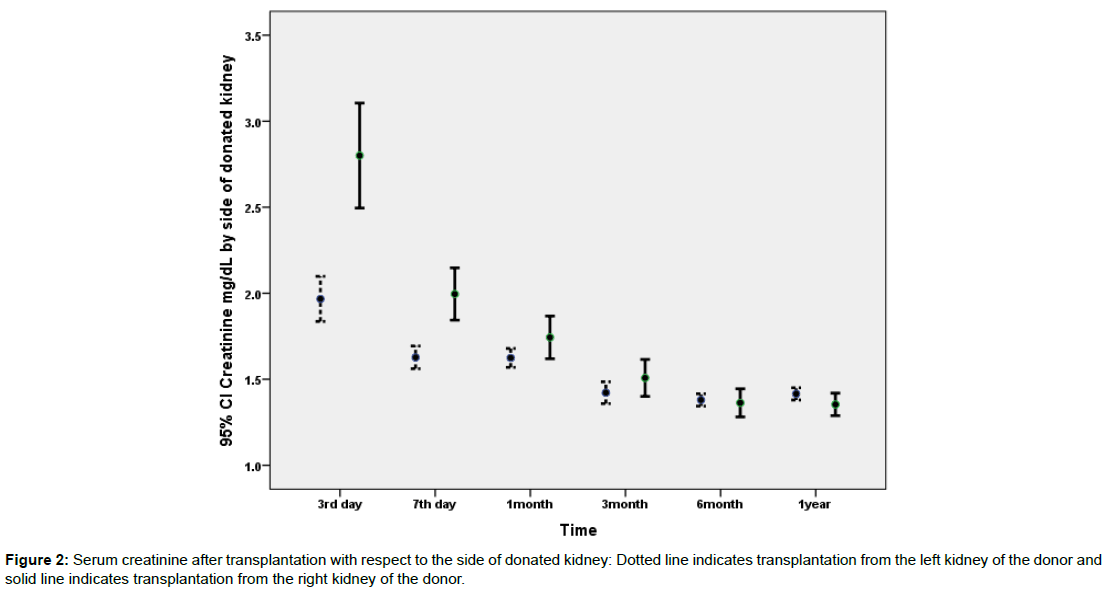 For transplantations from the left kidney of the donor, no statistically significant difference was observed between 3rd day, 7th day and one month serum creatinine when transplantation was performed on the right side or the left side of the recipient.

As the sequence of 1st, 2nd and 3rd transplantations was different between right and left implantations; and also to remove the potential confounding effects of donor and recipient age; we performed a linear regression analysis with enrolling potential confounders including donor age, recipient age, and sequence of transplantation with side of implantation into the model. The results of the regression model outlined in Table 3, indicates the lack of significance of side of surgery after enrolment of the above mentioned confounders in the model. A second regression analysis was performed for donor side after enrollment of donor age, recipient age, and sequence of transplantation into the model, in this model the influence of donor side on 7th day postoperative creatinine was still statistically significant after enrollment of the above mentioned variables. Briefly, left donated kidneys were associated with better 7th day postoperative creatinine in comparison with right donated kidneys. Due to co-linearity between donor side and side if implantation, we could not perform one regression taking both donor side and recipient side simultaneously into one model and separate models were used for each of them.

Table 3: Results of the multivariable regression analyses for investigation of the influence of donor side and side of implantation on the 7th day postoperative creatinine.

We appraised the aftermath of right and left kidneys procured from the deceased and living donors. Recipients of left donated kidneys revealed better allograft short term function in terms of 7th day postoperative creatinine in the crude data. Recipients of right kidneys that transplanted in left side were more likely to experience low graft function within the first week after transplantation but after one month their outcome became similar to recipients of right kidney transplanted in right side. Because our data was inhomogeneous in age, type of donor (cadaveric or living, open nephrectomy or Laparoscopic donor nephrectomy) and sequence of transplantation, to remove mentioned confounding factors in first week effect, we performed regression analysis including all proved confounders in univariate analysis into the regression model. The result of this model revealed that donor side of kidney is yet statistically significant of 7th day postoperative creatinine while the side of implantation was not.

The lengthier vein of the left kidney allows easier implantation without additional procedure. Nonetheless, right kidneys have longer arteries and give the impression to suffer risk of kinking. Withal shorter right renal vein may complicate venous anastomosis especially in obese recipients with deeper iliac vessels [7,11]. Also the frequency of anatomical variations in right kidney vessels is higher than the left, and these vessels are usually smaller in size which makes it prone it to thrombotic complications [12,13] Many surgeons especially in open donor nephrectomy obtain a patch of inferior vena cava if possible that can be more challenging in laparoscopic donor nephrectomies although results of right laparoscopic donor nephrectomy in overall is same in comparison with the left side.

Johnson et al. reported 201 renal implantations and Salehipour et al. reported 60 recipients with a comparable delayed graft function proportion for right and left kidneys although the number of their patients is rather small. Similar findings have also been reported for laparoscopic living donor renal transplant operations.

Khalil et al. evaluated 58 599 living donor transplants and reported more delayed graft function and more vessel thrombosis in right kidney recipients with a hazard ratio of 1.38 and 1.48 although graft survival difference was little. They showed that laparoscopic conversion to open was more in right donor nephrectomy. While our study yields higher postoperative creatinine just in first week for right kidney transplantation in either side of recipient however becomes similar in first year. Lechevallier et al. in a retrospective study of 257 patients, advocated that delayed graft function is more prevalent in right kidney recipients [9,14-18,20,21].

A review article by Phelan et al. revealed that delayed graft function were much higher during the 1990s at 25–30% but its rate gradually decreased to 16%. Up-to-date advances in kidney transplant management may have amended any shortfall accompanying with right-sided allografts and cleared different long-term results in current studies.

Although the exact reason cannot be proven, the anatomical differences between left and right kidney prejudice to a more difficult surgery, more anastomosis duration and extended warm ischemia time in case of transplantation from right kidneys. This phenomenon may explain our study results about inferior one-week outcome of right sided donated kidneys. Our crude results as explained in the results section reveals that when the right kidney in implanted in the right side of the recipient the outcome is superior than when it is implanted as suggested in the left side of the recipient. This could mean that in addition to difficulties with donor kidney explained above; recipient left side more is associated with a more difficult operation because of deeper iliac vessels. Interestingly for the left donor kidney, the crude data indicate that side of implantation was not associated with any difference in the postoperative function of implanted kidneys. This may because of longer left kidney vein and its easier anastomosis. Another possibility could be that the larger size of left kidney (146 cm3) versus right kidney (1343) may compensate operational insults in the recovery period sooner [10,14,21]. Nonetheless, if right kidney transplanted in left side of recipient outcome will be similar with other groups in one year follow-up after first week inferiority (Table 4).

There are some limitations in this study. First, we accept the characteristic flaws of any single-center study. However narrowing the study to one center lessens the confounding effects of numerous peri-operative practices. We performed a linear regression analysis with enrolling potentially confounding variables including donor age, recipient age, comorbidities, and sequence of transplantation with either side of implantation or side of donations into two models to increase the validity of the conclusion. Second, the operating surgeons might have selected left and right kidneys based on patient situations. Although cold ischemia times in living donor groups were comparable, deceased donors may confound outcome. Although arithmetical modifications were prepared, the likelihood of enduring confounding cannot be totally omitted. Lastly, estimated glomerular filtration rate is more valuable than creatinine which we practiced in comparing result.

Our data suggest that side of donor or recipient surgery in kidney transplantation is not important in one year follow-up. However, right donor kidneys were associated with higher 7th day postoperative creatinine in the recipients. Complications for side of donation or transplantation were not significantly different.

Copyright: © 2017 Rad HM, et al. This is an open-access article distributed under the terms of the Creative Commons Attribution License, which permits unrestricted use, distribution, and reproduction in any medium, provided the original author and source are credited.