Simple Determination of Sugars in Cigarettes

Centre for Health Protection, National Institute for Public Health and the Environment, Bilthoven, The Netherlands

Copyright: © 2014 Jansen E, et al. This is an open-access article distributed under the terms of the Creative Commons Attribution License, which permits unrestricted use, distribution, and reproduction in any medium, provided the original author and source are credited.

Simple sugars are an important constituent of tobacco, varying between almost 0 and 20% on weight of tobacco. Some manufacturers add sugars to the natural content in tobacco. In the present report, a simple and fast method is presented to analyze the concentrations of the sugars sucrose, glucose and fructose in cigarettes. After an extraction step, the diluted samples are applied to an isocratic HPLC system with detection by evaporated light scattering (ELSD). The method is very stable and sensitive with a good reproducibility. In one working day 80 samples of cigarettes can be processed and prepared for overnight HPLC analysis by one technician. The average total sugar content in 58 commercial cigarette brands is 17.4% (w/w) with a range of 1.9 to 18.3%.

Sugars are natural tobacco components and can be present in levels up to 20 weight %. Sugars can also be added to tobacco during the manufacturing process. The simple low-molecular weight sugars usually can serve as a flavoring substance and as humectant. Sugars also promote tobacco smoking, because they have a sweet taste and upon the smoking process sugars can generate an attractive smell of caramelized sugar [1]. In addition, sugars can also generate aldehydes, which are toxic inhalation compounds and probably also carcinogenic compounds [2].

Therefore the concentration and determination of sugars in tobacco is an important issue for regulatory authorities. In the literature many methods have been described for the analyses and quantification of simple sugars in tobacco. These methods are often rather laborious and not very suitable for large-scale screening purposes. In this paper we present a rather simple method for the determination of sugar monomers and dimers in cigarettes using reversed phase high performance liquid chromatography (HPLC) with detection by evaporative light scattering detection (ELSD).

The HPLC system consisted of an autosampler, two high pressure pumps (ProStar, Varian Inc, Middelburg, The Netherlands) and an ELSD detector. The ELSD detector (ZAM 3000, Schambeck SFD GmbH, Bad Honnef, Germany) was operated at 80°C with a flow of nitrogen at 1.7 ml/min. The chromatograms were recoded and integrated with the Galaxie data system (Varian Inc.). The standards of D-glucose, L-rhamnose, D-fructose, D-mannitol, D-sorbitol and D-ribose were obtained from AccuStandard, Da Vinci Laboratory Solutions B.V. Rotterdam, The Netherlands.

The cigarettes were purchased at local shops. For each analysis, approximately 100 mg of tobacco from the cigarettes was weighted and calculated back to exactly 100 mg for comparison.

The cigarette sample (approximate 100 mg) is extracted with 10 ml MilliQ for 60 min on a rolling bench. From this mixture, 2 ml was taken and centrifuged at 14.000 rpm for 10 minutes. The injection volume was 20 μl. The calibration curve was made with glucose, fructose and sucrose (Sigma Aldrich, Zwijndrecht, the Netherlands) in concentrations of 31.25, 62.5, 125, 250 and 500 mg/L. As internal standard D-sorbitol was used in a concentration of 1000 mg/L.

For the separation of the various sugars, a MetaCarb 67C column (250 × 4.6 cm) was used (Agilent, Amstelveen, the Netherlands), operating at 85°C. Isocratic elution was performed using MilliQ water with a flow of 0.5 mL/min. The runtime was set at 20 min.

The extraction of sugars from tobacco was tested in several ways by different solvent systems and extraction procedures. It appeared that there was no difference between the various procedures tested, such as ultrasonic treatment for 1 hr. Therefore the present method was selected which consists of a simple extraction of 100 mg of tobacco with 10 mL purified water on a rolling bank for 1 hr.

With the elution conditions, a complete baseline separation could be obtained with a mixture of sugars as is shown in Figure 1. In Figure 2 a typical example of an extract of tobacco from a cigarette is shown. In tobacco from cigarettes only sucrose, glucose and fructose are present. 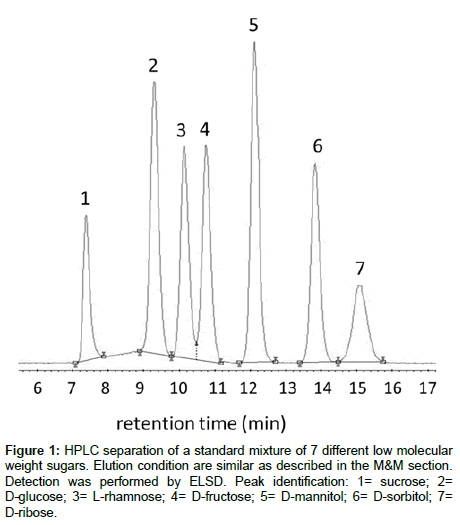 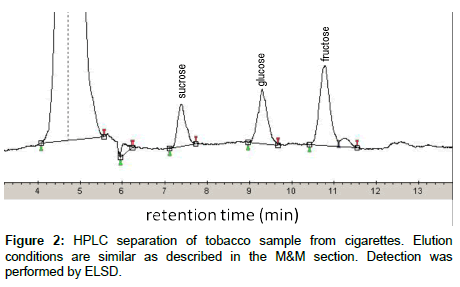 Figure 2: HPLC separation of tobacco sample from cigarettes. Elution conditions are similar as described in the M&M section. Detection was performed by ELSD.

Characteristics of the method

The measuring range is from the limit of detection (LOD) to about 500 mg sugar/g tobacco. The LOD for glucose is 0.3 mg/g tobacco, for fructose 0.4 mg/g tobacco and for sucrose 0.5 mg/g tobacco, where the LOD is defined as concentration which is three times the noise level.

The simple procedure allows the preparation of 80 samples of cigarettes within one working day by one skilled laboratory worker. The samples can be analyzed overnight by the HPLC system equipped with an auto-sampler.

With the presented method, the sugar concentrations in 58 different brands have been determined. In the samples only sucrose, glucose and fructose were present. The result is shown in Figure 3. 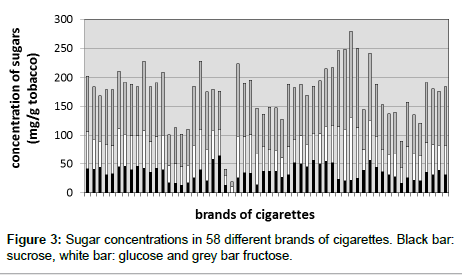 In almost all brands glucose, fructose and sucrose are present in various amounts. The average amounts are for sucrose 34.5 mg/g tobacco, for glucose 52.3 mg/g tobacco and for fructose 87.6 mg/g tobacco. The average total sugar content is 17.4% (w/w) with a range of 1.9 to 18.3%.

The method for the quantification of simple sugars in cigarettes, presented here, is a fast and precise method that can be performed with a simple isocratic HPLC system using an ELSD detector. The ELSD detection technique has turned out to have a better sensitivity, and is more stable with respect to baseline stability than the refractive index detection [3,4]. After a simple extraction with purified water followed by a centrifugation step, an aliquot was injected onto the HPLC system without the need of additional purification. In the chromatogram only three peaks are usually present in cigarettes, being sucrose, glucose and fructose. These compounds are baseline separated and can be quantified with correction using an internal standard. The limit of detection of the three sugars is in the range of 0.3-0.5 mg/g tobacco. In a series of 58 different brands of cigarettes, the lowest amount of glucose found was 10.8 mg/g tobacco and of fructose 7.9 mg/g tobacco, being about 20 times higher than the LODs.

The simple procedure allows the processing and detection of sugar in about 80 cigarettes per day by one skilled laboratory worker.

The sugar content in 58 brands of cigarettes was determined. In almost all samples the three sugars sucrose, glucose and fructose were present. Only one brand contained no sucrose. It has been reported that on average, only 1.8% of sugar is added to the tobacco of a cigarette [5]. It cannot be concluded form this study whether the sugars originate from natural sources or were added by the manufacturers.

In literature, only one report was found with detection of sugars in tobacco leaves using the ELSD detection [6]. The authors found about the same characteristics with respect to LODs and reproducibility. The procedure was somewhat more laborious by the addition of a solidphase extraction step prior to the HPLC separation. Since we have focused on the analysis of sugars in cigarettes, we did not perform standard addition experiments in tobacco leaves.

The presented method for the detection of simple sugars in cigarettes has a number of advantages compared with other reported methods [7-9]. Especially the use of the ELSD detection turned out to be advantageous by its temperature and solvent stability during operation. Combined with the simple sample pre-treatment, analysis of sugars of 80 samples/day is possible. Both LOD and dynamic range of the method are suitable for the regulation purposes of sugars in cigarettes.

This study was conducted with financial support of the Netherlands Food and Consumer Product Safety Authority (NVWA) and the Tobacco Free Initiative of the World Health Organization (WHO HQ/TFI).