Copyright: © 2016 Masunaga A, et al. This is an open-access article distributed under the terms of the Creative Commons Attribution License, which permits unrestricted use, distribution, and reproduction in any medium, provided the original author and source are credited.

To date, 19 proneural factors, which play important roles in fetal neural development, have been discovered in humans: Insulinomaassociated protein 1 (INSM1); neurogenin (NGN1); NGN2; NGN3; NEUROD/BETA2; NEUROD2; mammalian achaete-scute homolog (MASH1); MASH2, transcription factor 3 (TCF3); mammalian atonal homolog (ATOH1); ATOH7; nephew of atonal 3 (NATO3); oligodendrocyte transcription factor (OLIG1); OLIG2; OLIG3; mammalian atonal homolog (MATH2); MATH3; neurologic stem cell leukemia (NSCL1): and NSCL2 [2]. In addition to their in vivo roles, NGN1 and/or NGN2 have also been shown to induce neurogenesis in human fibroblasts and human stem cells in vitro [3,4]. Some of these proneural factors also play important roles in the development of neuroendocrine cells that originate in the endoderm. For example, INSM1, NEUROD/BETA2 and NGN3 are essential for the differentiation of pancreatic neuroendocrine cells from pancreatic duct cells, which have an endodermal origin [5,6]. The development of gastric endocrine cells also requires MASH1 and NGN3 in mice [7,8]. With regard to lung neuroendocrine carcinomas, some studies have shown that MASH1 and/or INSM1 are related to the development of SCLC [9-12].

At present, there is some controversy as to whether LCNEC is biologically similar to SCLC, and should therefore be treated in a similar fashion to SCLC. A recent study by Rekhtman et al., which employed next-generation sequencing of somatic DNA, demonstrated that lung LCNEC composed of SCLC-like and non-SCLC-like subsets and that LCNEC was thought to be composed of biologically heterogeneous groups [13].

Although the somatic DNA genetic profile could provide some key characteristics through which SCLC and LCNEC, and neuroendocrine and non-neuroendocrine carcinomas can be differentiated, protein expression is the key determinant of cell morphology and function. However, it can be difficult to accurately quantify protein expression. For this reason, we have chosen to measure messenger RNA (mRNA) using reverse transcription real-time polymerase chain reaction (PCR) in this study. We have measured and statistically analysed the mRNA expression of all 19 human proneural factors in SCLC, LCNEC invasive squamous cell carcinoma, and invasive adenocarcinoma.

We obtained freshly frozen tissue from six pulmonary neuroendocrine carcinomas (3 SCLCs and 3 LCNECs), 10 pulmonary invasive adenocarcinoma and 10 pulmonary invasive squamous cell carcinomas. We choose neuroendocrine carcinomas that were not combined with another histological type. All of the tumors had developed at the periphery of the lung. All of the patients underwent lobectomies with regional lymph node resection and did not receive any preoperative chemotherapy. The tumors were snap-frozen at the time of resection and stored at -80°C until use. The tumor sizes, and patents’ age and gender are listed (Table 1).

This study was approved by the Human Genome and Genetic Analysis Ethics Committee of Showa University (Certification No.232). 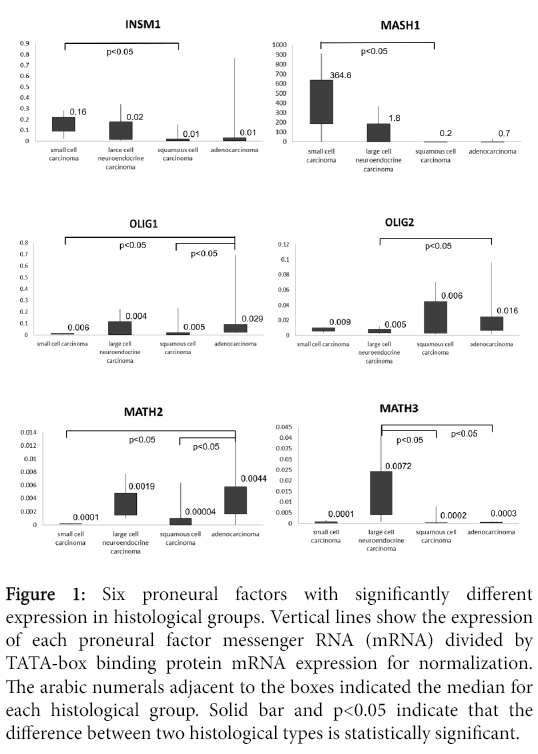 It is noteworthy that MATH3 mRNA levels in LCNEC were significantly higher than in either squamous cell carcinoma or adenocarcinoma. Although we were not able to statistically analyze the difference in MATH3 expression in SCLC and LCNEC, the levels of MATH3 mRNA seemed to be lower in SCLC than in LCNEC. As such, MATH3 might be a factor that specifically induces LCNEC tumorigenesis and/or maintenance. However, a recent study by Rekhtman et al. proposed that LCNEC is composed of heterogeneous groups of cells [13]. In this study, we were able to perform our analysis on small number of LCNECs because we used completely resected and fresh-frozen tumor samples to see accurate mRNA copy numbers [16]. To confirm whether MATH3 expression is a defining characteristic of lung LCNEC, MATH3 mRNA expression would need to be determined in a larger number of LCNEC cases. It would also be necessary to determine whether the overexpression of MATH3 mRNA can stimulate LCNEC development in non-tumorous respiratory epithelium or non-neuroendocrine tumor cells in vivo and in vitro .