+1 218 451 2974
Socio-Demographic Determinants of Psychoactive Substance Use among Students of Tertiary Institutions in Imo State, Nigeria

Socio-Demographic Determinants of Psychoactive Substance Use among Students of Tertiary Institutions in Imo State, Nigeria

Background: Psychoactive substance use among undergraduate students is a major public health problem globally and over 29 million people worldwide suffer from drug use disorders. Methodology: This study was carried out in February 2017 and the study design was an institution based descriptive cross-sectional type. The study population comprised undergraduate students in selected tertiary institutions of the state. A multistage sampling technique was used in the selection of study subjects. Data was collected using a pretested, semi-structured and self-administered questionnaire and analysis was done using IBM SPSS version 20. The level of statistical significance was set at p-value of ≤ 0.05. Results: The mean age of the respondents was 22.2 ± 3.8 years. The prevalence of the life time and current use of stimulants were 45.3% and 29.1% respectively and tobacco was the commonest stimulant used both in the past (50.3%) and currently (48.0%). Peer group influence was the commonest reason for initiating use of psychoactive substances. Factors significantly associated with current use of stimulants among the students were; gender (p<0.0001), level of study (p=0.012), accommodation statues (p<0.0001) and status of parents union (p=0.007). Conclusion: This study showed a high prevalence of psychoactive substance use among the respondents thus appropriate preventive measures should be adopted to minimise this menace.

Psychoactive substance use among undergraduate students is a major public health issue [2]. It is estimated that 1 in 20 adults, or a quarter of a billion people between the ages of 15 and 64 years, used at least one drug in 2014 according to 2016 world drug report [3]. Globally, over 29 million people suffer from drug use disorders, and of those, 12 million are people who inject drugs (PWID) of whom 14.0% are living with HIV [4]. The impact of drug use in terms of its health consequences continues to be devastating. The global disease burden attributed to alcohol and illicit drugs is estimated at 5.4% while 3.7% is attributed to tobacco use alone [4]. The preferred illicit substance use in Africa is cannabis while in European and Asian countries, it is opiates and in South America, cocaine predominates [5]. A descriptive national survey of substance use in Nigeria revealed that alcohol is the commonest psychoactive substance in use while cannabis is the most commonly used illicit drug [6].

During University period, students experience independence and freedom from direct adult and family supervision, self decision making and intense academic pressures as well as sharing living quarters with people they barely know. They also form new social groups and may be exposed to values different from their parental values [7-9]. These new values may motivate the youth to indulge in unhealthy behaviours such as smoking, alcohol and illicit drug use. Undergraduate students make the transition from the restricted life monitored by parents to a more self-directed life influenced by the university environment and as such, the risk of substance use is increased in university environments [10].

The use and abuse of substances have dramatically increased worldwide particularly in developing countries as depicted by recent trends [8,11,12]. Studies have shown that substance use is common among undergraduates and is becoming increasingly widespread in many African countries [9]. Most countries in sub-Saharan Africa are experiencing rapid economic, social and cultural transitions which have created favourable environment for increased and socially disruptive substance use [13].

Several works have shown that young people are ruining their lives through illicit drug use [14,15]. A comparison with other developing countries reveals that Nigeria ranks among the highest users of dangerous drugs such as alcohol, tobacco, cannabis, benzodiazepines, cocaine and opioids [16]. A review of the literature clearly indicates that there has been a steady increase in the prevalence of drug use and its associated consequences within the last three decades [16-18]. In many of the higher institutions of learning in Nigeria, there have been incessant student unrests, riots, crimes, cultism, many of which have been directly or indirectly linked with drug abuse [19-21].

This study was conducted to assess the prevalence, pattern and predictors of psychoactive substance use among students of different tertiary institutions in Imo State, Nigeria with a view to understanding the extent of the problem.

Imo state is one of the 36 states in Nigeria located in the South Eastern part of the country. It has 27 local government areas with 5 being urban and 22 being rural. The State covers an area of 5100 square kilometre with a population density varying from 230 to 1400 persons per square kilometre [22]. There are several government owned institutions of higher learning in the state which includes: Imo State University, Owerri; Federal University of Technology, Owerri; Federal Polytechnic, Nekede; Eastern Palm University, Ogboko; Imo State Polytechnic, Umuagwo; Alvan Ikoku College of Education, Owerri; Imo State Technological Skills Acquisition Institute, Orlu; College of Health Science and Technology, Amaigbo, Nwangele; School of Nursing, Amaimo and Imo State College of Nursing and Health Sciences, Orlu.

The study design was an institution based descriptive cross-sectional study. The study population comprised undergraduate students in selected tertiary institutions of the state.

Only full time students of the selected tertiary institutions irrespective of their year of study were enrolled and interviewed.

Sample size was calculated using the formula for single proportion in study populations greater than 10,000 [23];

Where n is the minimum sample size, Z is the standard normal deviate at 95% confidence interval (1.96), P is the proportion of stimulant use in previous study (0.62) 23 and d is the level of precision required, set at 0.05. The calculated sample size was 362. Considering a potential non-response rate of 10%, the minimum sample size required for this study was 398, however, 500 students were enrolled in this study with 430 giving their consent to participate.

The data were scrutinized and entered into the computer. Data cleaning was done by carrying out range and consistency checks. Descriptive and analytical statistics of the data were carried out using Statistical Package for Social Sciences (SPSS) IBM Window version 20. Chi-square and binary regression were used to document the presence of statistically significant associations between variables. A p-value of ≤ 0.05 was considered statistically significant. Descriptive data were presented as simple graphs, frequencies and percentages.

Ethical approval was gotten from the Ethics Committee of Imo State University Teaching Hospital, Imo State, Nigeria. All recruited respondents gave informed verbal consent. They were assured of the confidentiality of the information provided. All authors hereby declare that the study was carried out in line with ethical procedures as outlined in Helsinki declaration of 1964.

Awareness and knowledge of respondents about psychoactive substances

The most common source of information on psychoactive substances according to the respondents was friends/peer group (83.8%) and increase in increase in energy level (84.3%) as well as restlessness/anxiety (77.0%) were identified as common effects of stimulant use (Figures 1 and 2). 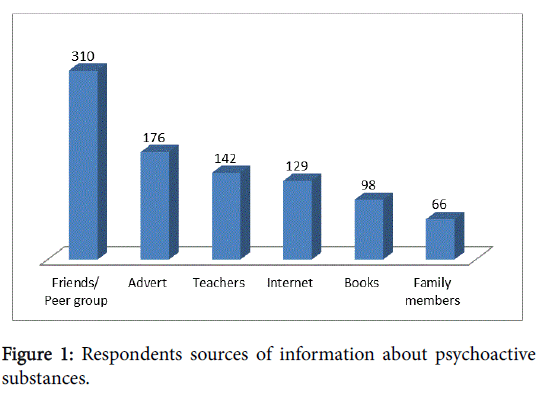 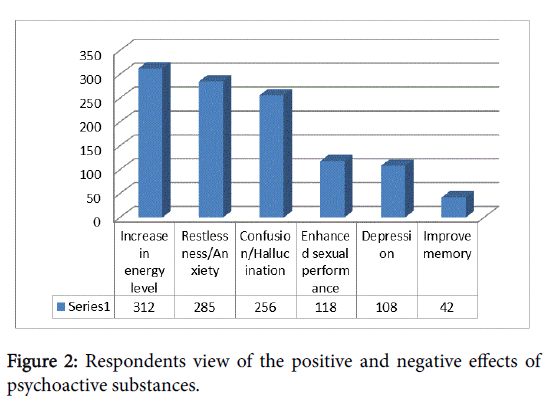 Figure 2:Respondents view of the positive and negative effects of psychoactive substances.

Use of psychoactive substances among respondents

A little under half (45.3%) of the respondents have ever used any form of psychoactive substances while 29.1% were current users in the last one year. Tobacco was the commonest psychoactive substance used both in the past (50.3%) and currently (48.0%). Common reasons for substance use were to relieve depression (53.6%), to enhance alertness (45.6%) and to keep awake at night (42.4%). Common positive effects experienced following psychoactive substance use were; increase in alertness (39.2%), increased energy level (33.6%), elevated mood (22.4%) and enhanced sexual performance (4.8%) while the negative effects include; restlessness (67.2%), confusion (19.2%) and depression (7.2%). Majority of the current users (83.1%) were introduced to substance use by their friends and peer groups with most (84.0%) of them intending to quit substance use. Common ways they intend to quit are by gainful use of their time (40.0%) and to dissociate from friends/peer groups that influence substance use (37.1%) (Table 3).

Table 3: Use of psychoactive substance among respondents, **Multiple responses.

Factors associated with current use of psychoactive substances

Table 4: Association between socio-demographic variables and current use of psychoactive substances in the past one year, *Significant.

Predictors of current use of psychoactive substances

The mean age of respondents in this study was 22.5 years. This is similar to that obtained by Onofa et al., [24] (23.9 years) in their study on prevalence and patterns of drug abuse among students of tertiary institutions in Ogun state, Nigeria and Imalebo et al., [25] among undergraduate students (21.3 years) in Port-Harcourt [24,25]. This study reported a higher proportion of male respondents. Similar studies have reported a preponderance of males in Nigeria institutions of higher learning [9,24,26]. The societal culture and attitude that seems to favour the male child could account for this. However, education of the female child has been on the rise especially in south eastern part of Nigeria [26].

Some of the reasons given for psychoactive substance use by our respondents were to relieve depression, to enhance alertness, to keep awake at night, peer pressure and to enhance sexual performance. These were similar to findings reported in previous studies for initiation of substance use and included academic pressure, temptation by peer groups, to relieve stress and to increase pleasure during sex [8,9,28].

Almost all the respondents (90.8%) in this study were initiated into using psychoactive substances by either a friend or a family member. Several studies have identified peers and relatives as major sources of psychoactive substance initiation [28,31-33]. It has been suggested that peers might serve as good role models for substance use intervention program [30].

The strength of the study lies in the involvement of students from different higher institutions across the state and from all faculties. The study limitation is that the study design was a cross-sectional type and the data was self-reported which could likely lead to bias. A longitudinal design in which students are followed up from admission to graduation would be most ideal.

The study showed a high prevalence of psychoactive substance use among the students studied. It also identified peer group influence, accommodation status of the students, family type and their parents’ marital status as some of the risk factors for substance use.

Copyright: ©2017 Duru CB, et al. This is an open-access article distributed under the terms of the Creative Commons Attribution License, which permits unrestricted use, distribution, and reproduction in any medium, provided the original author and source are credited.