Water is a most essential commodity for human survival and important to numerous sectors of Indian economy. Inland aquatic resources include river, pond, lake, wetland etc. These water bodies are important for both human and aquatic life. Freshwater resources like villages ponds are gradually declining due to human activities and urbanization. Fishing activities have also created negative impacts on water resources and health of fishes [1-3]. Human rely on renewable fresh water for drinking, irrigation of crops, and industrial uses as well as production of fish and waterfowl, transportation, recreation, and waste disposal. During the last two decades, aquaculture has grown rapidly, expanding faster than most other food sectors. Aquaculture will face many challenges such as diseases and improvement of waterquality management over the next decade [4]. Aquaculture is now providing about half of the fish consumed by the human population globally. An ecosystem constitutes the ultimate source areas for freshwater provisioning services. Growth in global human population and water consumption rate will put supplementary pressure on freshwater resources in the coming period.

Pond water is a primary unit of inland fish production [2,5]. Ponds are shallow water bodies of standing water [6]. Small perennial water bodies such as ponds and tanks are maintaining biodiversity and provide help for recharging of river in monsoon season. Wild ponds are rich in plankton biodiversity compared to managed ponds [7]. These water bodies are also providing huge food security and livelihoods of peoples globally [2,8]. Ponds get their energy from the sun and develop own ecological phenomena with help of substratum nature (e.g., productivity). Inland fish production of India reached 12.5 m tones with help of scientific technology but this technology applies only in developed states while in developing states fish cultivation has done mostly with the traditional system. The gap between scientific and traditional system has been detected in grass root in present study.

The objective of the present study was to provide status of total resource data and fish farming structure from the Allahabad districts and also to retrieve the current status of exotic fish species, Cyprinus carpio and Oreochromis niloticus in culture point of view.

A complete enumeration of ponds and tanks upto 10 ha water bodies (group-I water bodies) were done during December 2013 to March 2014. Data were collected on different parameters such as area, depth, soil type, water resources, water retention, aquatic weeds, culture type, inputs used, harvesting season and production etc. During demarcation time each and every villages were surveyed by two CIFRI teams. Data were collected with the help of fish farmers and villagers. Data were analysis with the help of Inland Fisheries Management System (IFMS) software (Figure 1). 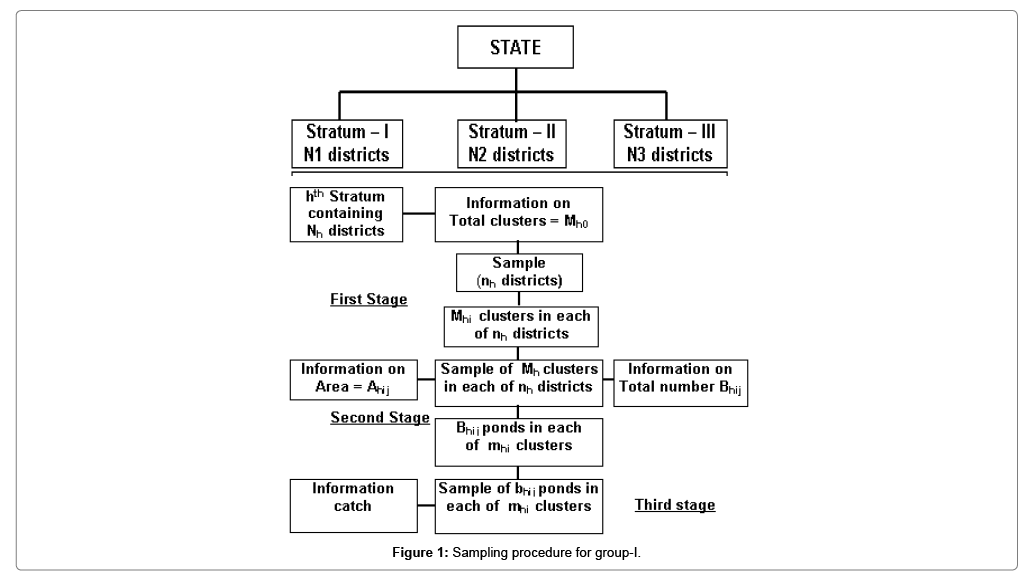 a) Average area per cluster in hth Stratum

b) Average area harvested per cluster in hth stratum

c) Average yield per cluster of hth stratum is

Allahabad district has 3090 villages spread in 8 tehsils. The total number of fishing villages were recorded 716 out of 1343 villages having ponds. Handia tehsil has maximum number of villages having fishing pond while Allahabad tehsil has minimum villages having fishing pond. The ponds of the district had mainly been faded by rainy water in compared to irrigation canals and ground water. The pond has not been maintained by embankment, outlet and inlet. Due to absence of embankment, water level and water spread area was not maintained throughout the year and also not protected by air breathing fishes during the flood. Two types of aquatic weeds were recorded very common in ponds viz Eichhornia spp. and Hydrilla spp. Organic loads (e.g., domestic effluents, cow dung) was also observed in a very high extent in numerous ponds. In rainy season as well as in cloudy days there was a heavy organic load has been recorded and due to which there are many gases have been produced in the ponds. The percentage of fishing villages were recorded 28.71%, 25.77%, 29.77%, 24.49%, 16.54%, 30.22%, 18.16% and 18.85% in Allahabad, Bara, Karchhana, Meja, Koraon, Soraon, Phulpur and Handia tehsils, respectively. Overall district percentage of villages having fish pond was 23.17%. The Karchhana, Handia and Meja tehsils ponds were found to be dense by the Ganga river fish stocks during the flood (monsoon season). During the monsoon, various ponds are been boosted by the Ganga river water from the Ganga basin [9].

Fishing ponds were specially being used for culture of fish species like Catla catla (Catla/Bhakur), Labeo rohita (Rohu), Cirrhinus mrigala (Mrigal/Nain) and Cyprinus carpio (Common carp/China rohu). Some farmers were also culturing Hypophthalmichthys molitrix (Silver carp) and Ctenopharyngodon idella (Grass carp). Few formers were also used Oreochromis niloticus (Nile tilapia) in culture who were lived in the villages situated near the bank of the Ganga and Yamuna rivers. L. rohita was most dominant fish species of the district. C. carpio was the second most dominated cultured fish species of the district due to growth and profit. Stocking density of fishes was recorded very high in the ponds of district. In general, farmers were stocking fry of fishes but some farmers also stocked fingerlings [10,11]. The fry of fishes mainly purchase from the hatchery but some farmers also used riverine fry and fingerling for stocking. Proper seed availability were recorded in the district in monsoon season only but seeds of C. carpio and O. niloticus were available twice in a year owing to their two or three breeding season in a year. These fishes are breeds two or three times in the Ganga and Yamuna rivers [10]. In general, the productions of fishes from the ponds were found to be low due to the problems related with management (e.g., pond preparation, cultivation, farm supervision) of the pond of district (Figure 2). C. carpio was making a high competition to C. mrigala for food from the ponds, which was also increase turbidity by feeding nature. Herman et al. stated that the C. carpio has increased turbidity in water bodies. 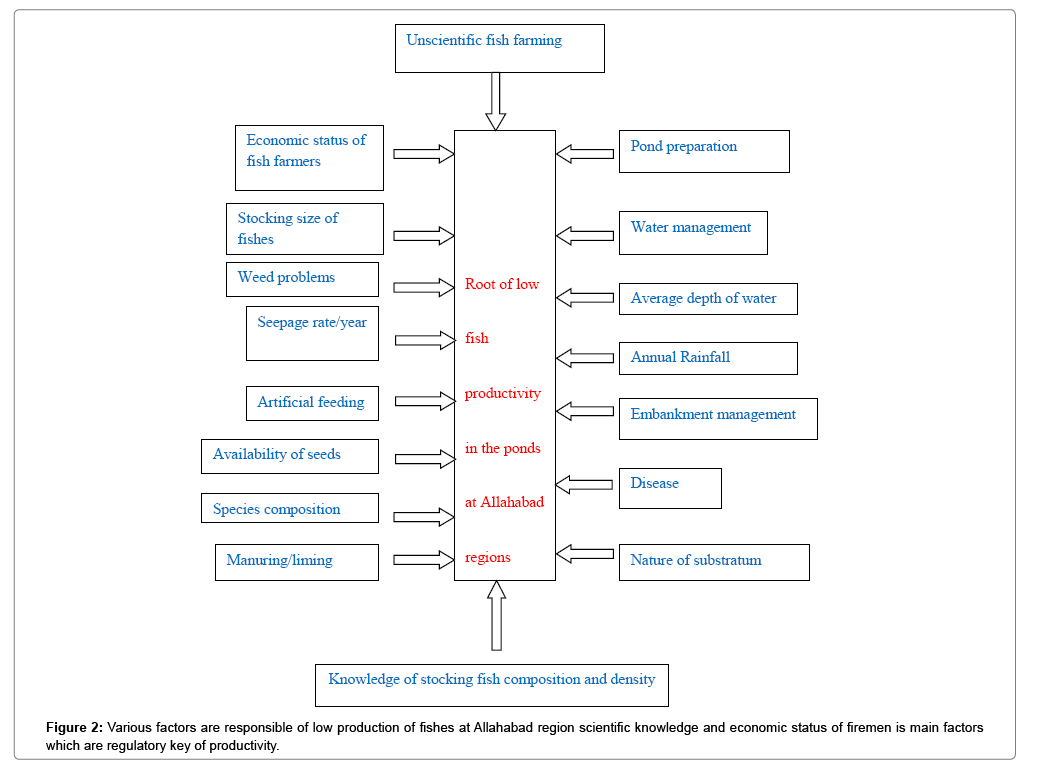 Figure 2: Various factors are responsible of low production of fishes at Allahabad region scientific knowledge and economic status of firemen is main factors which are regulatory key of productivity.

Argulus or fish louse is a common crustacean parasite which causes external damage to Indian major carps, C. catla, L. rohita, C. mrigala as well as in exotic carps, H. molitrix, C. idellus and C. carpio and finally has made lose in the total production of the ponds. Oluborode et al. was also recorded frequently infected fishes from the Faizabad district.

The fish farming of the district mostly performed by traditional technique in wild ponds (e.g., all ecological process depends, balanced and developed by natural cycle) and managed ponds, few farmers were used scientific technique. Due to traditional farming system, the production of the district was low. The wild ponds were observed low productive in compared to managed pond and difference was significantly higher [2,12]. The fish formers of the district stated that the fish production of the pond significantly increased with heavy and longer duration of rainfall. Culture of fishes in traditional system in the district was done without fish feeding, liming and manuring. Some farmers did artificial feeding to their fishes by the interval of 2-7 days with rice polish, rice brawn and small amount of mustard oil cake in broadcasting format. Poor management of fish pond, such as over-stocking, over-feeding (on that day in which the food given) or improper disposal of dead fish, gives rise to large amount of organic matters in the water body environment were recorded.

Study were showed that Soraon tehsil was the most active tehsil as far as in fish farming is concerned and Koraon tehsil were found very poor in fishery activities. Fishing activities could be improved in these tehsils but Karchhana tehsil has more potential for fishing in future. Though the most of the water bodies existing in different villages are presently under fish farming but there is still immense scope for further expansion of farming activities as well as yield enhancement from each water body. It is very clear that political crucial and poor enforcements are major donors to fishery failures [2,13].

The seeds of C. carpio are also collected from rivers while O. niloticus seeds are totally collected from the rivers [14]. The exotic species is playing a significant role in the production of fishes from the district [15,16]. It is dominant fish species from the Ganga and Yamuna rivers [17]. During the flood, O. niloticus and C. carpio automatically stocked in the ponds [18,19].

In the tehsils of Koraon and Bara, non-fishing ponds were mostly used for irrigation purposes. The non-fishing ponds were also used for the cropping of the Trapa spp. (English name- Water caltrop; Hindi name- Singhara). The Trapa spp. is a seasonal crop (monsoon and winter seasons) and most profitable for fishermen community. Those ponds have high organic loads and muddy substratum which is mainly using for the production of Trapa spp. in the district. Air breathing fishes viz Heteropneustes fossilis, Clarias batrachus, Anabas testudineus and Channa spp. were frequently recorded from the non-fishing ponds.

It may be concluded that the water resources of the district is sufficient but maximum ponds are fed by rainy water and remain dry for 7-9 months. So, the maximum ponds are not uses for fish culture. L. rohita is a very choicely and highly marketable demand fish species from the district. Traditional culture techniques were used by formers. Water and feeding management was not done properly (e.g., scientific).

➢ Development of canal system and other water sources for filling of water.

➢ State fishery department should provide training to fish farmers under blue revolution through NFDB suitable for this region.

Copyright: © 2018 Dwivedi AC, et al. This is an open-access article distributed under the terms of the Creative Commons Attribution License, which permits unrestricted use, distribution, and reproduction in any medium, provided the original author and source are credited.