Manganese, Chromium, Cobalt, Copper and Zinc complexes of methionine were prepared and characterized by IR, electronic absorption spectra, elemental analysis, magnetic susceptibilities, the differential thermal analysis (DTA) and thermal gravimetric analysis (TGA) of the complexes pointed to their stability. The mechanism of the thermal decomposition is detected .The thermodynamic parameters of the dissociation steps are evaluated. The absorption ability of complexes to aflatoxin has been studied. All complexes reduced the toxic effect of aflatoxin.

The bioinorganic projects focus the synthesis of transition complexes using ligand – peptide conjugates that will impart coordination environments similar to those found in biological systems [1]. The design of new complexes plays an important role in bioinorganic chemistry [2-4]. A large number of metal-binding substances such as amino acids and proteins are present in biological systems. Low– molecular weight substances are involved in the absorption and transport of metal ions and metalloproteins play various roles, such as enzymatic catalysis, oxygen transport, and metal ion storage and transport [5,6]. Proteins such as metallothioneins protect organisms from the toxic effects of exogenous metal ions [7]. Most transition metal amino acid complexes have considerable biological activity, such as antitumor properties [8]. Amino acids usually increase the diffusibility of complexes and enhance their biological action inside the cell [9]. Such systems are widely used in the field of chemotherapy. Structural studies of many transition metal complexes have shown that amino acids coordinate in various ways, dependent upon the metal ion, its oxidation state and the primary structure of the amino acid [10]. Methionine is one of the nine essential amino acids needed by human beings and its copper (II) complex showed some antiulcer activity as revealed by animal model studies [11] and has also found some interest in veterinary medicine, for copper supplementation [12-14].

Preparation of the complexes

Solutions of 0.08 mole of Mn, Cr, Co, Cu and Zn sulfate were mixed with 0.08 mole of methionine. The reaction mixture was refluxed for two hours and then left overnight where the complexes were precipitated. Then filtered, washed with distilled water and dried in vacuum desiccators over P4O10. The melting points of the complexes are over 300ºC.

The complexes were digested and decomposed with aqua regia. The metal ion contents were determined by atomic absorption (Table 1) spectra.

These were done at the Micro Analytical Laboratory (Table 1), Faculty of Science, Tanta University, Egypt.

Effect complexes on aflatoxin concentration: One liter of yeast extract broth was divided into 10 flasks. Each flask’s content was mixed with one of the tested compounds to reach a final concentration of 2000 μg/ml. All flasks were artificially contaminated with 104 (c.f.u.) of toxigenic Aspergillus flavus strain and incubated at 25-27ºC for 21 days after which autoclaving of the media was done at 121ºC for 30 min. then mycotoxin concentration was determined using Fluorometer Vicam V 1.3 Series 4, according to [17].

To study physical and chemical properties of chelated mineral and its effect on aflatoxin.

Methionine complexes: The most important ir spectral bands for methionine and its complexes are given in (Figure 1). The bands a 3342-3269, 3409-3349-3277, 3413.9-3237, 3317 cm-1 for Mn, Cr, Co, Cu and Zn methionine complexes respectively, arise the coordination of H2O molecules and asymmetric stretching vibration of NH2 [18]. The presence of new band at 3269, 3277, 3237 and 3317 cm-1 in Mn, Co, Cu and Zn methionine complexes respectively, are due to γs NH2. So, the nitrogen of the amino group is involved in coordination [19]. It is worthwhile to mention that the free methionine exist as zwitterions (NH3. AA. COO-) due to the presence of characteristic γ (NH3) and σ NH3. The amino acid in complexes does not exist in zwitterions, NH3 get deprotonated and binds to metals through the neutral NH2 group. The transformation of NH3to NH2 must result in upward shift in γs NH2 and δNH2 [20,21]. On complexation, the two δNH2 stretching vibration at 1695 and 1590 cm-1 together with some deformational motions of this group could be observed. The position of these bands clearly supports the involvement of this group in bonding. Moreover, the γ (C-N) stretching mode at 1352 cm-1 is affected to different extent in complexation [22]. The IR spectra showed strong evidence in support of the involvement of carboxylate group in coordination. The γas COO- and γs COO- at 1610 and 1410 cm-1 record shifts in complexes. New ir bands appeared at 588-440 cm-1 are due to γ M-O and γ M-N. So, methionine act as bidentate ligand.The band at 2370cm-1 attributted to γ (SH) unaffected on complexation indicated that (S) atom is not involved in chelation. 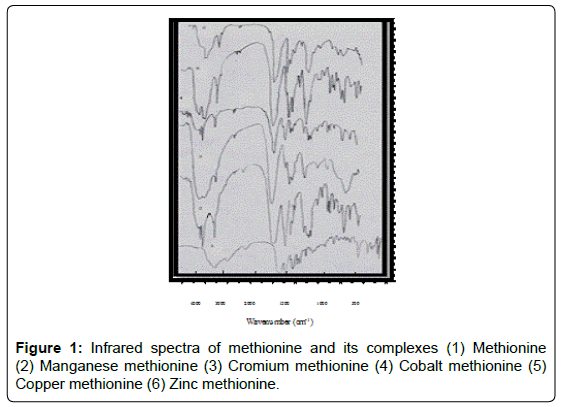 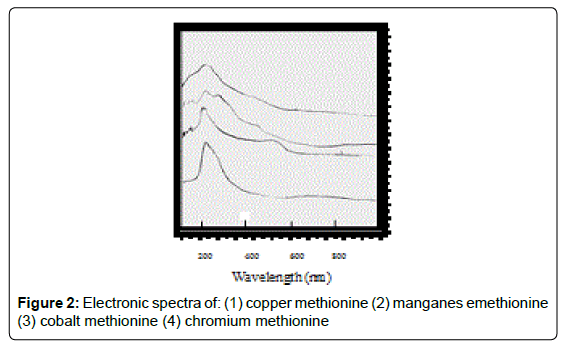 The DTA and TGA of manganese methionine Mn(L)3. 2H2O, (Figure 4) gave one endothermic peak at 99.3 and exothermic peaks at 247.8°C and 513°C.The first peak is assigned to dehydration process of the lattice and coordinated water molecules with activation energy 353.3 KJ/mole, the larger the Ea values is may be due to the thermal agitation accompanying the water elimination [27].The two exothermic peaks at 247 and 513°C with activation energies 79.2 and 220.15 KJ/ mole are corresponding to the thermal agitation and decomposition of complexes ended with the formation of MnO 13.4% [28].

The TG and DTA curves of copper methionine complex Cu (L).3H2O, (Figure 5), pointed to that the dehydration process of water molecules takes places in one step in the temperature range (29.6-240)°C with activation energy 160.4 KJ/mole [28]. The strong exothermic peak at 250°C is due thermal agitation and decomposition steps of metal complexes as evident from TG. The latter broad band peak with maximum at 350°C and the associated TGA peaks with the temperature range (240-500)°C showed weight loss of 49.33% is assigned to the decomposition of complex ended with the formation of Cu O as final product [29].

Table 2 show that the addition of methionine complexes results in reduction of aflatoxin percentage to different degree. The complexes have the ability to absorb mycotoxin with high affinity. In vitro results suggested that the complexes are a strong binder for aflatoxin. An inert, stable and insoluble complex between chelated mineral and aflatoxin was assumed to be responsible for toxin absorption [32]. Absorptions by all metal complexes increase with increasing their levels. The activity order of complexes are copper methionine>zinc methionine>cobalt methionine. The geometric structure of the complexes plays an important role for adsorption of aflatoxin. So, the tetrahedral structure has the great ability to bind aflatoxin than octahedral structure [33-37].

Table 2: The effect of complexes on the concentration (%) of aflatoxin.

Transition metalamino acid complex (copper, zinc and cobalt methionine) have considerable biological activity against aflatoxin and the geometry structure of complex play an important role for adsorption of aflatoxin.

Copyright: © 2015 Ashry GME, et al. This is an open-access article distributed under the terms of the Creative Commons Attribution License, which permits unrestricted use, distribution, and reproduction in any medium, provided the original author and source are credited.