The Clinical Value of Abnormal TBX15 Hypermethylation in HCC

The Clinical Value of Abnormal TBX15 Hypermethylation in HCC

Background: HCC is one of the most common and invasive malignant tumors in the world. The objective of this research was to explore the methylation of TBX15 and determine the clinical value of TBX15 Hypermethylation in Hepatocellular Carcinoma (HCC).

Methods: The methylation status of the TBX15 gene in 61 pairs of HCC patient tumor and paracancerous tissues was analyzed with bisulfite and methylation-specific PCR, and the association between TBX15 Hypermethylation and specific clinical features was determined.

Hepatocellular Carcinoma (HCC) is one of the most common and aggressive malignant tumors in the world, and it is also the third most common cause of death in the world [1,2]. The disease causes nearly 600,000 deaths worldwide every year, and its morbidity and mortality have been increasing in recent years. Although surgical treatment and medical management strategies for HCC have progressed, the overall prognosis of HCC patients is still not satisfactory because liver cancer patients undergoing treatment often suffer from terminal-stage cancer. The 5-year survival rate of HCC is approximately 17% [3,4]. Although the Alpha-Fetoprotein(AFP) tumor marker is routinely used in early screening for HCC, which has reduced the mortality of liver cancer, its sensitivity and specificity are still limited [5,6]. Therefore, discovering a valuable cellular biomarker specific for HCC and exploring new diagnosis and treatment strategies are crucial.

The alteration of DNA methylation is a key epigenetic event in cancer. Such alteration has been confirmed to play a vital role in cancer and other human diseases [7]. DNA methylation often occurs in Tumor Suppressor Genes (TSGs), and Hypermethylation can cause inappropriate transcriptional silencing [8,9], leading to the occurrence and development of cancer. Current research shows that the T-box gene family is a systematically conserved transcription factor family that regulates a variety of developmental processes [10] and the proliferation and differentiation of tissue-specific stem and progenitor cells [11,12]. The T-box gene family is divided into 5 subfamilies. The TBX15 gene belongs to the Tbx2 subfamily [13]. It is involved in a variety of biological processes, such as cell proliferation, differentiation, metastasis and apoptosis. Evidence shows that TBX15 affects cell proliferation and apoptosis via antiapoptotic effects in cancer [14]. Therefore, it is considered a TSG. For example, in ovarian cancer, immunohistochemistry analysis showed a negative correlation between the TBX15 methylation level and TBX15 protein expression [15]. TBX15 methylation is also significantly correlated with pathological stage, Gleason score and biochemical relapse in prostate cancer [16]. The studies of Gao [17], Zheng [18] and others have found that HCC tumor tissues display higher methylation of the TBX15 gene promoter than paracancerous tissues. However, there is no research on the relationship between TBX15 methylation and liver cancer clinical characteristics. Therefore, in this study, the methylation status of TBX15 in HCC and adjacent paracancerous tissues was determined to study the relationship between the methylation status and clinical characteristics of HCC patients. Finally, an evaluation of its clinical value is provided.

Subjects were chosen from patients who underwent radical liver resection at the First Associated Hospital of Zhejiang University. The patients met the following criteria:

• The subject was undergoing radical resection for liver cancer.

• The subject was suffering from only HCC without any derived or secondary carcinomas.

• No radiotherapy or chemotherapy was administered before surgery.

All patients signed an informed consent form. The resected tumor tissue from the liver and its adjacent tissues were collected post-surgery. The paracancerous tissues were obtained from tissues surrounding the tumor within a radius of 1 cm. All tissues collected were stored in liquid nitrogen tanks at -80°C. The TNM classification method was used for clinical staging. Among the enrolled patients, 11 patients had stage I disease, 4 patients had stage II disease, 43 patients had stage III disease, and 3 patients had stage IV disease. In this study, the average age of the patients was 58.3 years with a standard deviation of 11.04. The follow-up time was from the end of the surgery to September 2020. The average follow-up time was 383.19 days with a standard deviation of 86.29. All but 3 patients kept in contact during the follow-up period. This study was approved by the Ethics Committee of the First Affiliated Hospital of Zhejiang University.

DNA extraction: DNA was extracted from tissue samples, and a Nano drop 2000 (Thermo Fisher Scientific Co. Ltd) was used to test the quality of genomic DNA. The concentration of all samples was ≥ 20 ng/μL and the total amount was ≥ 1 μg. All DNA absorbance ratios at 260/280 nm were between 1.8 and 2.0. Agarose gel electrophoresis was used to detect the integrity of genomic DNA. The electrophoresis bands of all the samples were clearly visible without RNA contamination.

Table 1: Primers used in this study.

Sequencing: Libraries from different samples were quantified and pooled together, followed by sequencing on the Illumina MiSeq platform according to the manufacturer’s protocols. Sequencing was performed with the 2 × 300 bp paired-end mode.

Statistical analysis: Using R language (version 4.0.2) for statistical analysis, Student’s t-test was used to analyze the methylation level differences between tumor tissues and paired paracancerous tissues. The associations between cancer tissue methylation status and clinicopathological characteristics were analyzed by Wilcoxon exact rank tests. A Receiver Operating Characteristic (ROC) curve was generated to determine the TBX15 gene methylation threshold, and the area under the ROC curve (AUC) was determined to evaluate the diagnostic value in HCC. The determination of the ability of TBX15 methylation in tumor tissues to predict relapse-free survival was performed via Kaplan-Meier survival analysis and log-rank tests. Cox proportional hazards regression analysis was performed to evaluate the prognostic utility of TBX15 methylation in HCC. Results were determined significant with a standard of P<0.05. 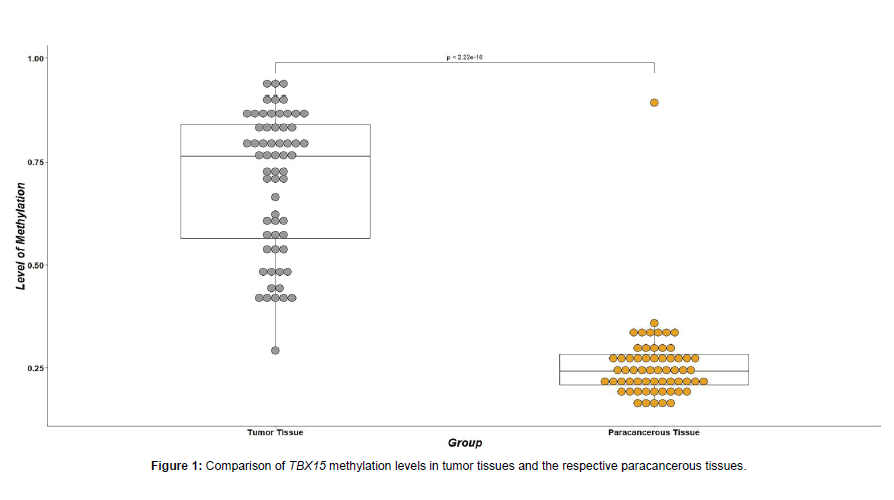 This study explored the association between the TBX15 methylation level and clinicopathological characteristics of patients with HCC. Several factors including age, sex, AFP level, HBV status, TNM stage and tumor size, presence of thrombi and/or vascular invasion and envelope integrity were included in this study. As indicated in (Table 3), male patient TBX15 methylation levels were significantly higher than those of female patients (P<0.05). TBX15 methylation levels were increased in tumor tissues with vascular invasion (P>0.05) and tumor tissues with poor envelope integrity (P<0.05), which may indicate a poor prognosis outcome. In addition, Hypermethylation of TBX15 was related to stage III and IV disease (P<0.05). There was no significant correlation between methylation and other clinicopathological characteristics (P>0.05).

Table 3: Relationship between the TBX15 methylation level and clinicopathological characteristics of patients with HCC.

Association between TBX15 methylation and the prognosis of HCC patients 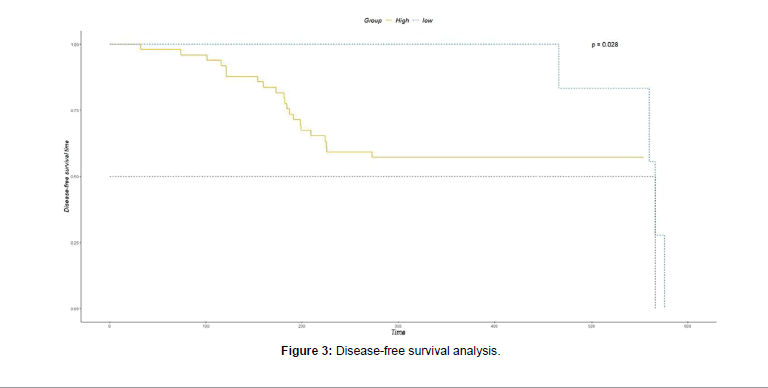 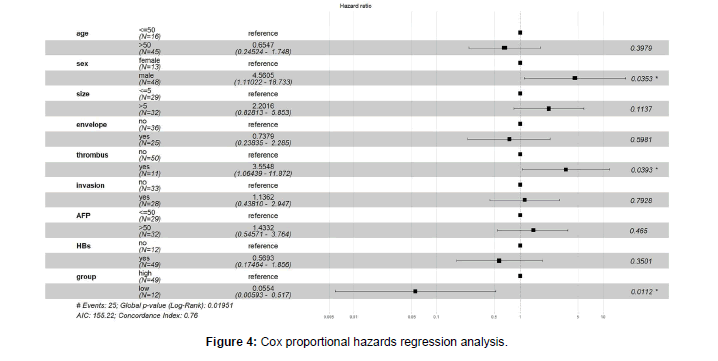 Research shows that the annual incidence of HCC increases by approximately 3.1% per year [19]. Seventy- five percent of patients in this study diagnosed with HCC had stage III or IV disease. The overall prognosis of HCC patients after treatment is poor. Clinically, the most important thing is to identify HCC patients and provide active treatment measures. In addition, patients must also be monitored after treatment for relapse to reduce mortality. Therefore, it is imperative to find biomarkers that can be used to diagnose HCC and predict the prognosis of HCC patients. DNA methylation is the most common and widely studied epigenetic modification and is an important mechanism related to the occurrence and development of cancers; thus, it is a promising factor to consider when attempting identifying biomarkers.

TBX15 is an important transcription factor that can regulate the proliferation and differentiation of tissue-specific stem cells and progenitor cells [11,12]. The expression of TBX15 can inhibit tumor cell growth and invasion. TBX15 can also change the ratio of pro-apoptotic proteins to antiapoptotic proteins. TBX15 can negatively affect tumor regulation [20]. DNA Hypermethylation can cause TBX15 expression to be down regulated. TBX15 is hypermethylated and down regulated in ovarian cancer [21], pancreatic cancer [22] and esophageal cancer [23]. In this study, we confirmed that the methylation levels of TBX15 in HCC tissues were higher than those in paired paracancerous tissues. The methylation of TBX15 may lead to the down regulation of its expression and the development of tumors. In addition, the association between TBX15 Hypermethylation and the clinicopathological characteristics of HCC patients was also explored. The results showed that TBX15 methylation levels were increased in incomplete capsules (P<0.05). The TBX15 methylation level was significantly increased in patients with advanced-stage cancer, suggesting that TBX15 methylation is associated with malignant behavior.

The results of research on DNA methylation have been applied clinically. Some reports have shown that gene methylation can be detected in body fluids such as urine, plasma, and serum and tissues. In addition, gene silencing caused by TSG methylation is reversible. Demethylating reagents such as 5-azacytidine can re-express previously silenced genes in cancer cells. Clinically, Demethylating reagents such as decitabine or azacytidine have been used to treat solid carcinomas. Therefore, using gene methylation as a biomarker for tumor diagnosis and treatment is a very promising research strategy. However, more clinical trials are needed to further determine the clinical value of TBX15 methylation.

This research was supported by the San-Ming Program from the Shenzhen Healthcare Research Project (SZSM201412006).

The datasets used and/or analyzed during the current study are available from the corresponding author on reasonable request.

Rui-kun Zhang and Jia-lin Liu conceived of the study design and determined appropriate surveys and survey items for the study. Zhu Hai collected the data. Rui-kun Zhang and Zhu Hai performed the data analysis. Hai-yang Xie and Jia-lin Liu interpreted analysis results and participated in drafts and revisions of this manuscript. All authors reviewed and provided approval for the final version of the manuscript.

This research has been approved by the Ethics Committee of the First Associated Hospital of Zhejiang University. All subjects signed an informed consent and all methods are done according to the Declaration of Helsinki together with relevant rules and standards.

All patients who participated also consented for the publication of this manuscript.

Copyright: © 2021 Zhang RK, et al. This is an open-access article distributed under the terms of the Creative Commons Attribution License, which permits unrestricted use, distribution, and reproduction in any medium, provided the original author and source are credited.