Abuse of prescription opioids emerged as a major public health problem during the last decade and is now the second most common form of illicit drug use in the United States [1-4]. Opioid agonists formulated with inverse agonists or neutral antagonists are a potential method of decreasing prescription opioid misuse. Several formulations are available or under development, with most designed to thwart injection drug misuse or circumvention of slow release mechanisms. One such formulation, designed for sublingual administration, employs a fixed ratio of the partial µ-opioid agonist buprenorphine and the inverse agonist naloxone. Buprenorphine/ naloxone is designed to decrease intravenous abuse in opioid dependent individuals. However, this combination does not decrease the abuse liability of sublingually administered buprenorphine [5]. Formulations that limit the abuse potential of non-injection opioids remain largely unavailable and are urgently needed.

Increasing exposure to opioid medications produces tolerance and eventually dependence. The biological processes mediating the transition from abuse to addiction and tolerance to dependence are poorly understood. Whatever the mechanism, this transition appears to be permanent. All current therapeutic options for opioid addiction are palliative - none reverse addiction and all require potentially life-long suppressive therapy. Therefore, we seek to diminish the abuse potential of prescription opioids and potentially to prevent development of opioid tolerance and dependence by attenuating or eliminating the desired euphoric effects that can be gained by excessive self-administration.

One potential solution is the coformulation of a neutral antagonist with opioid agonists for the treatment of pain (e.g. hydrocodone, oxycodone). The neutral opioid antagonist 6-β-naltrexol (6βNTX), the principal metabolite of naltrexone, is an attractive candidate for such a co-formulation. Neutral antagonists, unlike inverse agonists, do not block basal signaling [6]. As a result, neutral opioid antagonists differ from inverse agonists in that they do not precipitate substantial withdrawal under most conditions. In animal studies, 6βNTX precipitated less severe opioid withdrawal than inverse agonists such as naltrexone and naloxone while still dose-dependently attenuating opioid agonist effects [7,8]. 6βNTX has a two-fold lesser affinity for the µ-opioid receptor than the inverse agonist naltrexone [9]. In individuals treated with sustained release injectable naltrexone, the 6-beta-naltrexone area under the curve (AUC) exceeds the naltrexone AUC by a factor of 3 and is slowly excreted from the body, with a half-life of 13 hours [10,11]. These findings suggest that if this coformulation were taken as prescribed, 6βNTX would not interfere with the analgesic properties of opioid agonists, but that the repeated dosing pattern typical of abuse would lead to the accumulation of 6βNTX in the body, and attenuation of opioid agonist effects.

Another benefit of 6βNTX may be its ability to reverse Opioid-induced bowel dysfunction. In mice, 6βNTX preferentially antagonizes opioid effects on gastrointestinal transit compared to effects on the central nervous system [12]. This characteristic of 6βNTX is an advantage in conditions requiring high levels of analgesia, where opioid-induced constipation is a major dose limiting factor. Methylnaltrexone, a drug that has restricted ability to precipitate opioid withdrawal due to exclusion from the CNS, was FDA approved for opioid-induced constipation in 2008 [13].

The aims of this first-in-human study were to examine the pharmacokinetics of 6βNTX, and measure two key characteristics of 6βNTX in highly opioid dependent persons: unwanted aspects of opioid antagonism such as withdrawal, and preferential suppression of opioid effects on the gastrointestinal tract compared to the central nervous system.

In this ascending-dose placebo-controlled design, four opioid dependent subjects on methadone maintenance were given intravenous 6βNTX-HCl in solution. Subjects were required to be 21 to 50 years old, receiving a stable dose of 10-100 mg of methadone per day, and able to tolerate opioid withdrawal. Exclusion criteria were clinically significant medical or psychiatric conditions, changes in smoking status within the last three months, any medical treatment likely to affect hepatic clearance, or a urine sample positive for a non-methadone opioid. All study procedures were approved by the California Pacific Medical Center Institutional Review Board.

Prior to naloxone dosing, subjects were given an oral dose of 10 g lactulose powder mixed with 240 cc water. To assess ability to tolerate opioid withdrawal effects, subjects received 0.05 mg of naloxone or placebo intravenously over five minutes. Subjects who tolerated the initial naloxone precipitated withdrawal and produced H2 gas after ingestion of lactulose were cleared to receive 6βNTX dosing. Subjects found not to produce H2 were excluded.

The ascending doses of 6ßNTX were 0.05 mg, 0.15 mg, 0.5 mg, and 1.0 mg. All 6βNTX and placebo doses were given as 15-minute IV infusions with a Harvard Pump and were administered within four hours of subjects receiving their daily methadone dose. All dose administrations were scheduled a minimum of 72 hours apart.

Subjects were screened with standard instruments pre-dose for safety. Subjects were then monitored a minimum of four hours after the 0.05 mg, 0.15 mg, and 0.5 mg doses of 6βNTX and a minimum of 8 hours after the 1.0 mg dose. Drug effects were monitored with the Visual analog scale (VAS) Subjective Opiate Withdrawal Scale (SOWS), and Objective Opiate Withdrawal Scale (OOWS) questionnaires. Questionnaire responses and vital signs were recorded at routine intervals. Any laxation was noted. During the 1.0 mg 6βNTX dosing session, 6βNTX PK levels were obtained at 0.25, 0.50, 1, 2, 4, 6, 8 and 24 hours after dosing. Dose escalation was halted if VAS score for "Withdrawal" was greater than 50%, or a cumulative SOWS score was greater than 24 at any time. In addition, dose escalation only continued if the subject and study physician agreed that a higher dose was likely to be safely tolerated.

Oral-cecal transit time testing was performed to measure the effects of 6βNTX on opioid induced bowel obstruction. Subjects fasted a minimum of 10 hours before dosing sessions, at which they received oral lactulose suspension and the scheduled 6βNTX or placebo dose. Expiratory breath samples were collected in a 750 mL bag every 15 minutes. Gas composition analysis was immediately performed using a Quintron BreathTracker (QuinTron Instrument Company, Milwaukee WI) following ingestion of the lactulose suspension. Transit time measurements were based on H2, CH4 and CO2 levels in expired air generated. Subjects were deemed ineligible for transit time testing if they exhibited results consistent with small bowel bacterial overgrowth, defined as a biphasic pattern in H2 or CH4 levels with an increase of at least 20 ppm in the first 2 hours followed by a larger increase.

To determine whether 6βNTX dose affected peak effects, linear mixed effects models were constructed where maximum values were predicted by dose as a fixed effect and subject as a random effect. For outcomes that differed significantly by dose, multiple comparisons corrected t-tests were performed comparing dose levels to placebo.

Eight subjects were enrolled. Of these subjects, four were ineligible for dosing with 6βNTX: three due to small bowel bacterial overgrowth and one due to difficulty with IV catheter insertion. Clinical characteristics of the four subjects who received 6βNTX are presented in Table 1. One subject met stopping criteria after receiving the 0.5 mg 6βNTX dose, and did not receive either the 1.0 mg dose or placebo. Another subject experienced distress at the 1.0 mg dose, reporting a 10 on the 10 point pain scale and did not provide Self-report data between 15 min and 6 hours after dosing. The remaining two subjects tolerated the 1.0 mg dose and reported a willingness to take higher doses of 6βNTX. 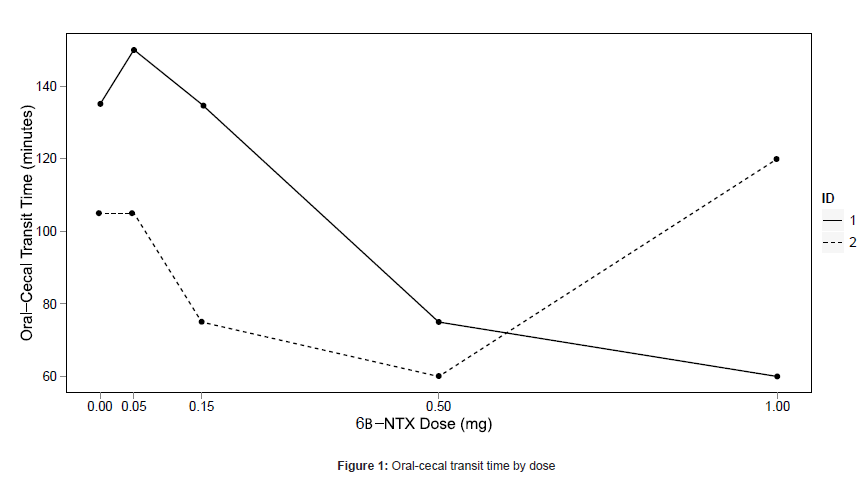 We present results of the first-in-human study of the neutral opioid antagonist 6βNTX and the effects of 6βNTX in opioid dependent subjects. At all but the highest dose (1.0 mg), 6βNTX was well tolerated by this highly opioid dependent sample population. This is consistent with animal research suggesting that 6βNTX causes substantially less opioid withdrawal than inverse agonists like naloxone.

Overall, 6βNTX did not precipitate substantial withdrawal. VAS, SOWS, and OOWS scores were lower across all 6βNTX doses than scores from a recent study of opioid dependent subjects after administration of 0.4 mg of naloxone [14]. Withdrawal intensity was tolerable, with three out of four subjects willing to continue to receive higher doses than were administered. The remaining subject, who reported a substantial negative effect from the 1.0 mg dose, was receiving only 19 mg of methadone daily, the smallest methadone dose in the cohort.

Our data support a dose-dependent increase in GI activity, with the largest effects seen at 0.5 mg and 1.0 mg. Laxation was seen in 75% of subjects at 0.5 mg and in 67% at 1.0 mg. The oral-cecal transit time collected from two subjects data were promising: decreases were seen relative to placebo at some doses. More data is needed to clarify the effect of 6βNTX on transit time. Recent findings suggest 6βNTX decreases oral-cecal transit time in opioid dependent mice [12].

We detected a 6βNTX half-life substantially shorter than has been previously reported [15]. This was likely due to the assay we used, which had a lower limit of detection of 0.5ng/mL. At our experimental dosage of 1.0 mg, plasma level of 6βNTX was close to this limit at 4 hours post dosing, causing levels from later time points to be unreliable. Nonetheless, a first approximation of the PK properties of 6βNTX has been obtained.

Although the small sample size limits the power of these results, we were able to characterize the effects of 6βNTX in humans. Overall withdrawal effects were minor, and there was evidence of opioid antagonism in the gastrointestinal tract. This study does not suggest a mechanism for 6βNTX's significant peripheral activity coupled with an absence of central opioid withdrawal. However, like methylnaltrexone, 6βNTX may have less ability to cross the blood brain barrier than naltrexone. This study suggests 6βNTX is a promising candidate for co-formulation with opioid agonists to prevent both opioid abuse and opioid-induced bowel dysfunction, and provides a foundation for further exploration of effective doses. Further research in opioid naïve individuals is necessary to assess the potential of 6βNTX.

WS serves as Chief Scientific Officer for AIKO Biotechnology. JM serves on the Scientific Advisory Board of AIKO and owns 3 shares of stock that have a total value of less than $400.00.

Copyright: © 2010 Mendelson J, et al. This is an open-access article distributed under the terms of the Creative Commons Attribution License, which permits unrestricted use, distribution, and reproduction in any medium, provided the original author and source are credited.