The ovarian pathology is very wide thus making the histological differentiation extremely hard. This is the reason some researchers start using various new markers as a distinctive factor between malignant and benign ovarian diseases, one of which is the S100A1 protein.

The aim of our research is to compare the S100A1's expression in malignant and benign tissue probes because previous studies on this biomarker suggested that it is only positive in neoplastic cells.

Materials and methods: This retrospective study includes 80 patients (40 with benign and 40 with malignant lesions), who underwent surgical treatment in the Clinic of Gynecologic Oncology, University Hospital "Dr. Georgi Stranski" - Pleven. All ovarian samples were histologically examined and the expression of S100A1 was determined.

The ovarian tissue originates from the mesonephros, which makes it possible for some normal tissue to be positive for S100A1. In addition the ovarian tissue contains nerves which could also be marked as positive. In order for S100A1 to be proven as a useful tool for marking malignancies, more research on a larger amount of samples is needed. Ovarian cancer consists of 60% epithelial variants, which are the main reason for the high mortality of this disease [13,14]. There are eight hystomorphological subtypes of epithelial ovarian carcinoma: serous, endometrioid, clear cell, mucinous, transitional, squamous, mixed epithelial and undifferentiated ovarian carcinoma.

Histological diagnosis between low differentiated ovarian carcinoma and low differentiated serous carcinoma is challenging because of their similar microscopic appearances [15]. Similar difficulties exist in the differentiation between clear cell from endometroid carcinoma with secretory changes or from serous adenocarcinoma. In these cases the use of immunohistochemical markers such as ER and WT1 is highly indicated. WT1 is expressed in serous adenocarcinoma, ER in endometroid adenocarcinoma, while clear cell carcinoma is negative for both markers [15]. This is why there is a need for a specific immunechistochemical marker that can be used to differentiate between variety of lesions. The clinical relevance of such biomarker would be crucial, since new research indicates that Ist and IInd stage endometroid and mucinous adenocarcinomas have an increased tumor response rate to adjuvant telegamma therapy. There is no reported effect of adjuvant telegamma therapy in serous ovarian carcinomas or ovarian carcinomas in IIIrd stage (regardless of the histological type) [16].

Our aim was to study the expression of S100A1 protein in normal ovarian tissue, ovarian serous papillary cystadenocarcinoma, ovarian mucinous cystadenocarcinoma and endometrioid ovarian carcinoma, using immunohistochemistry and thus prove whether or not it can be a useful tool for differentiating them from one another. This retrospective study includes 80 patients (40 with benign and 40 with malignant lesions), who underwent surgical treatment in Clinic of Gynecologic Oncology, University Hospital “Dr. Georgi Stranski” - Pleven, Bulgaria. The patient's mean age was 50.13 (between 23-83 y). Histological samples were obtained from the archive of the Department of Pathoanatomy, University Hospital “Doctor Georgi Stranski” - Pleven. Patients who underwent neo-adjuvant chemotherapy, hormonal treatment in the last 12 months, patients who had ovarian metastasis from the primary tumor, other benign tumors, tumors with borderline malignancy, other malignant ovarian tumors and postmenopausal patients were excluded from this research.

The paraffin-embedded tissue blocks were obtained from the Department of Pathoanatomy and were dissected to slices with 4 micro meters size, containing viable tissue. Slides were incubated with antihuman S100A1 monoclonal antibody, according to the DAKO protocols, which resulted in staining. This procedure was done manually by the method FLEX En VISION (DAKO). The immunohistochemicall staining was visualized with 3-3’diaminobenzidine and the materials were contra-colored with the Mayer’s hematoxilin. The slices were divided in series of 5 each and in each series there was one slice with a positive control sample – adipose tissue, nerves (positive control) or blood vessels (negative control). The slices were examined by pathologist and divided by positivity in three groups: nuclear, citoplasmatic or both. The slides from benign lesions were assigned scores from 1 to 4-1 (no staining in 400x magnification), 2 (little staining in 200x-400x magnification), 3 (intermediate staining in 200x magnification), 4(strong staining in 40x magnification). The S100A1 expression was determined for the neoplastic tissues. Two groups were created - partly positive tissues (only some of the tumor cells were positive) and diffusely positive (100% of the tumor cells were positive). Statistical analysis - the frequency of positive for S100A1 tumor cells was quantified. The expression type (nuclear, cytoplasmic or both) was represented as percent. The statistical differences in the analyzed data were quantified with the χ2. The level of significance for comparison was a P value of less than 0.05.

The normal ovarian tissue had S100A1 positivity in various structures, with different intensity of coloring. The positivity for the different malignant histological variants is variable being either diffuse or focal. In all 40 of the histology samples nerves with various intensity for S100A1 were detected (Figure 1). In all cases the staining might be either nuclear, cytoplasmatic or both. In 5 (12.5%) of the probed materials rete ovari was detected and the nuclear/cytoplasmic coloring was intiensive for four of them, while the last sample had intensive cytoplasmic/nuclear coloring instead (Figure 2). Corpus luteum was detected in 7 (17.5%) of the materials. Four samples the granulose lutein cells showed intermediate cytoplasmic positivity for S100A1, as for the rest three samples the response was low (Figure 3). The superficial ovarian epithelium, ovarian inclusion cysts (in one sample 2.5%) secondary follicles, ovarian vessels and ovarian stroma were all negative for S100A1 (Figures 4-6). 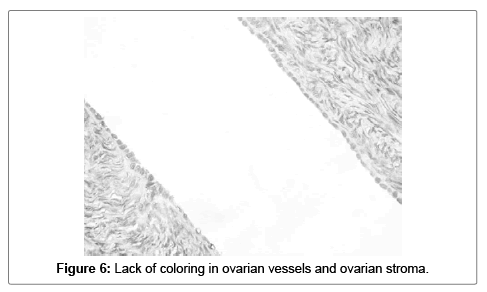 Figure 6: Lack of coloring in ovarian vessels and ovarian stroma.

Functional cysts were detected in 16 (40%) of the samples. Fourteen of them (35%) were follicular cysts and only two (5%) were cysts of corpus luteum. In the 16 follicular cysts the S100A1 positivity (strongly positive in 5 and intermediate in 9) was detected in the granulose cells. In the corpus luteum cysts the S100A1 postivity was intermediate (cytoplasmic) (Figures 7 and 8). Most of the tertiary and quaternary follicles had low to intermediate cytoplasmic positivity in the granulose cells (Figures 9 and 10). Figure 9: Granulose cell coloring of the tertiary and follicles. The expression of S100A1 protein was present in 31 samples (77.5%) of the malignant ovarian tissues, while in the other 9 (22.5%) there was no expression of S100A1 protein. The positivity for the different histological variants is represented in Table 1. For the papillary carcinomas of the ovary the expression was detected in 27 out of 32(84.38%) of all samples. The rest 5 samples (15.62%) showed no expression of the marker. In the group of ovarian mucinous carcinomas (2 samples) one was positive and one was negative for the marker’s expression. In the group of ovarian endometrioid carcinomas (6 samples) three were positive and 3 were negative for S100A1. In 11(35.48%) of all samples with malignancies the positivity was found to be diffuse (present in all of the tumor cells).No correlation between the differentiation of the ovarian carcinomas and the S100A1 expression was detected; χ2=0.04, Df=2; p=0.9808 (Table 2).

According to our data, the S100A1 expression in benign ovarian tissue is characterized by permanent immune-positivity in some structures. This staining might be nuclear, citoplasmatic or both. The intensity of this coloring might vary from low to intermediate and high. This could be explained with the fact, that this research examined a large amount of the ovarian tissue, while in the studies of De Rycke et al. and Hibbs et al. only solid ovarian parenchyma and epithelium were included in the examined slices. The positive structures such as rete ovari, follicular cysts, corpus luteum, cysts of corpus luteum, tertiary and quaternary follicles were excluded from the slices. This makes the benign ovarian tissue appear negative for S100A1 which can mislead the pathologist. The inclusion cysts (created from the superficial ovarian epithelium) might be easily differentiated from functional cysts with the help of light microscopy or hematoxylin and eosin staining.

As for the malignant ovarian tissue - the groups, represented in this research, are similar to other studies, made in the past. The only notable difference is the absence of clear cell carcinoma cases in this current study. This may be due to the small period of time and the small number of patients, which were covered here. This research resonates with the previous data, which claims that a large amount of primary ovarian carcinomas are positive for S100A1. The frequency of S100A1 positive carcinomas (84.36%) is higher than in the data, published by De Rycke MS et al (63.7%). This research shows five times higher frequency from endometrioid ovarian carcinomas and ten times higher frequency for ovarian mucinous carcinoma, when compared to previous studies b-10. This difference may be explained either due to the small number of patients, which this research covers, or the presence of mainly focal S100A1 positivity in the tumor cells, which might be missed in the research - mostly because it is not routinely examined .This research rejects any correlation between the tumor differentiation and the S100A1 expression.

On one hand, the marker’s expression is detected in all tumor types so it cannot be used for differentiation between them. On the other hand, the mixed nuclear-cytoplasmic positivity is present only in the serous carcinomas. This means it might be used in the diagnosis of such lesions, but further studies that include more patients are needed. It might be useful to examine the S100A1 expression in other, rarer types of ovarian carcinomas, which were not included in this current study.

According to our data, the expression of S100A1 cannot be exploited as a sole tumor marker. However it could be used in benign ovarian lesions differentiating inclusion cysts from follicular cysts, as an alternative of the inhin and calretinin usage. The expression of S100A1 in normal ovarian structures lowers its specificity as a tumor marker. The level of S100A1 expression cannot be used as a measurement for the tumor’s differentiation. This report demonstrates that the usage of this marker should be redefined. Although there is no correlation between the S100A1 expression and histological findings, the role of this marker merits further study because of its potential to be routinely used as a biomarker in detection of ovarian pathology.

Copyright: ©2017 Yordanov AD, et al. This is an open-access article distributed under the terms of the Creative Commons Attribution License, which permits unrestricted use, distribution, and reproduction in any medium, provided the original author and source are credited.